Our five favourite features in the new Apple Maps

If Royal Canadian Geographical Society and Westaway Explorer-in-Residence Adam Shoalts had used the former Apple Maps application to plan his 4,000-kilometre journey across Canada’s three territories he would have found large tracts of grey on the screen, signifying unmapped areas. Today, the application is far more precise, with a recent update adding layers of rich detail to Apple Maps.

The Cupertino-based company unveiled its new and improved Maps application yesterday, in a silent software push that rolled out the changes on devices, and the results are astounding.

“With Apple Maps, we have created the best and most private maps app on the planet and we are excited to bring this experience to our users in Canada,” says Apple’s senior vice president of internet software and services, Eddy Cue.

“We have rebuilt Apple Maps from the ground up to provide better navigation, richer detail, more accurate information for places, and incredible features like Look Around, curated Guides from trusted sources, and much more. Now it is easier than ever for users in Canada to explore and navigate the world.”

Two days ago, a simple search of Northwest Territories’ Hare Indian River, or the Dease, both of which Shoalts travelled on his 2018 expedition, would not have turned up much. A quick search for Bliss Lake, even yesterday morning, yielded a flat grey space to the west of Sparrow Lake — which was included on the map. Following the update, Bliss Lake is surrounded by more than 100 bodies of water, big and small. 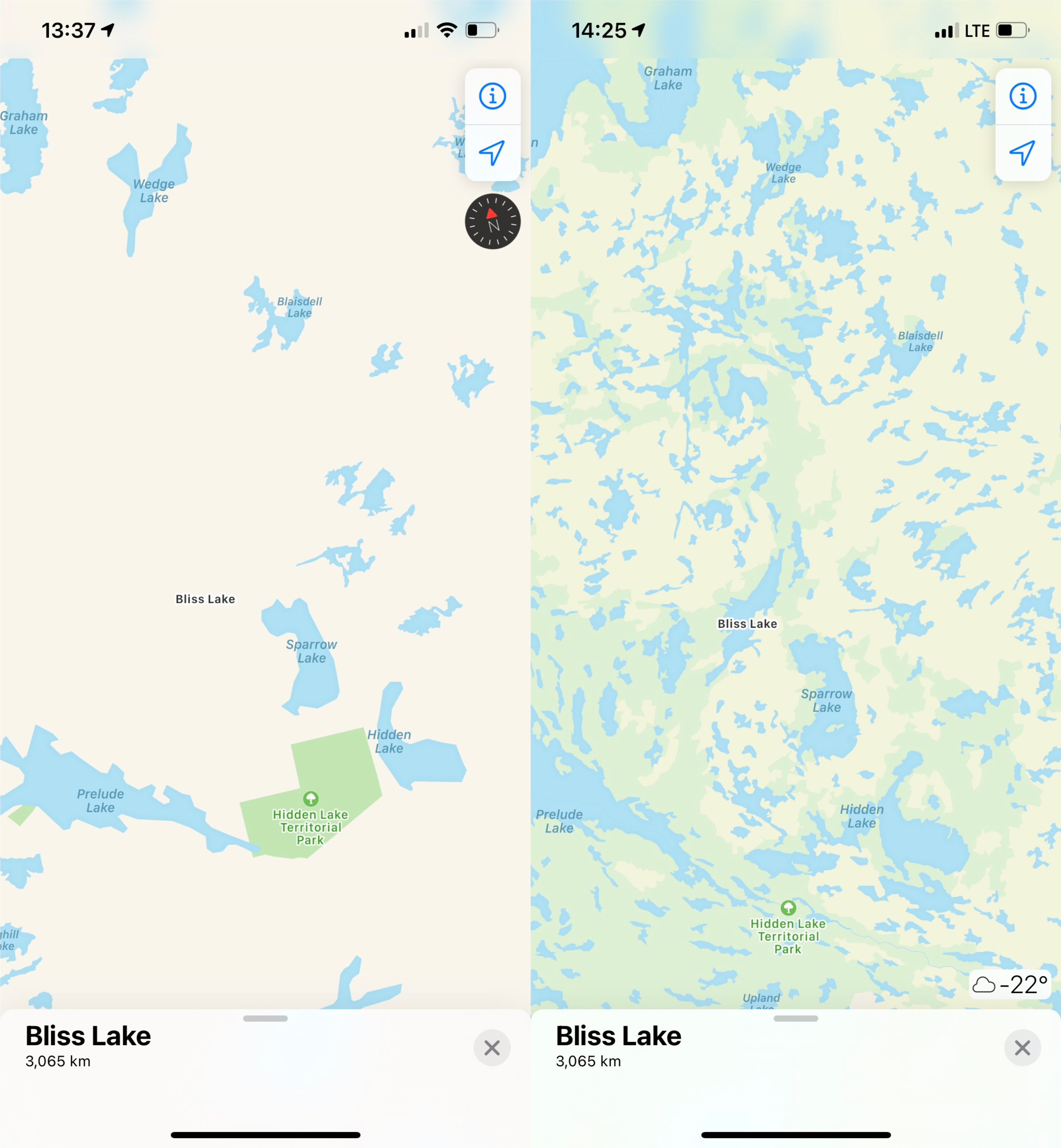 Bliss Lake before and after the update.

The Ross River now stretches through the eastern reaches of the Yukon territory. The rivers, lakes and waterways of Nunavik are now brilliantly detailed, offering Maps users the chance to plot boating channels through remote northern Quebec and across Canada. Plus there's been speed cameras, indoor maps and flight status updates.

The list of updates was rather lengthy, so Canadian Geographic caught up with the Apple Maps team to get the details on five of our favourite new features.

Here’s what we discovered:

Apple has been championing data security and privacy for some time, but really put an emphasis on protecting location data with this new release of Maps. Each of its personalised features, such as suggested departure times ahead of your next appointment, are curated using on-device intelligence. This means that Apple Maps pulls information from your phone and displays suggestions within the app, without saving or sharing your personal data externally. Data collected through usage — like search terms, navigation routes, etc. — are associated with random identifiers which continually reset, and Apple servers even obscure a user’s location through a process called “fuzzing.” What really captured our attention was that Maps does not keep a running history of where you have been or what you have searched, unlike many of the other competitive cartography applications out there.

New kids on the block

Look Around, another new feature now available in Canada, is essentially Google Street View with a number of added benefits. Spend just two minutes navigating through the nation’s capital using Look Around and you’ll see what sets it apart. The blending of high resolution imagery with 3D photography, the seamless movement as you cruise down an avenue, the integration of real life businesses that you can click on and learn more about. Even the transitioning from street to street is incredibly smooth. Look Around is available in most major cities across Canada, parts of Newfoundland, Nova Scotia (yes, Peggy’s Cove!) and more. North of 60? Stay tuned. 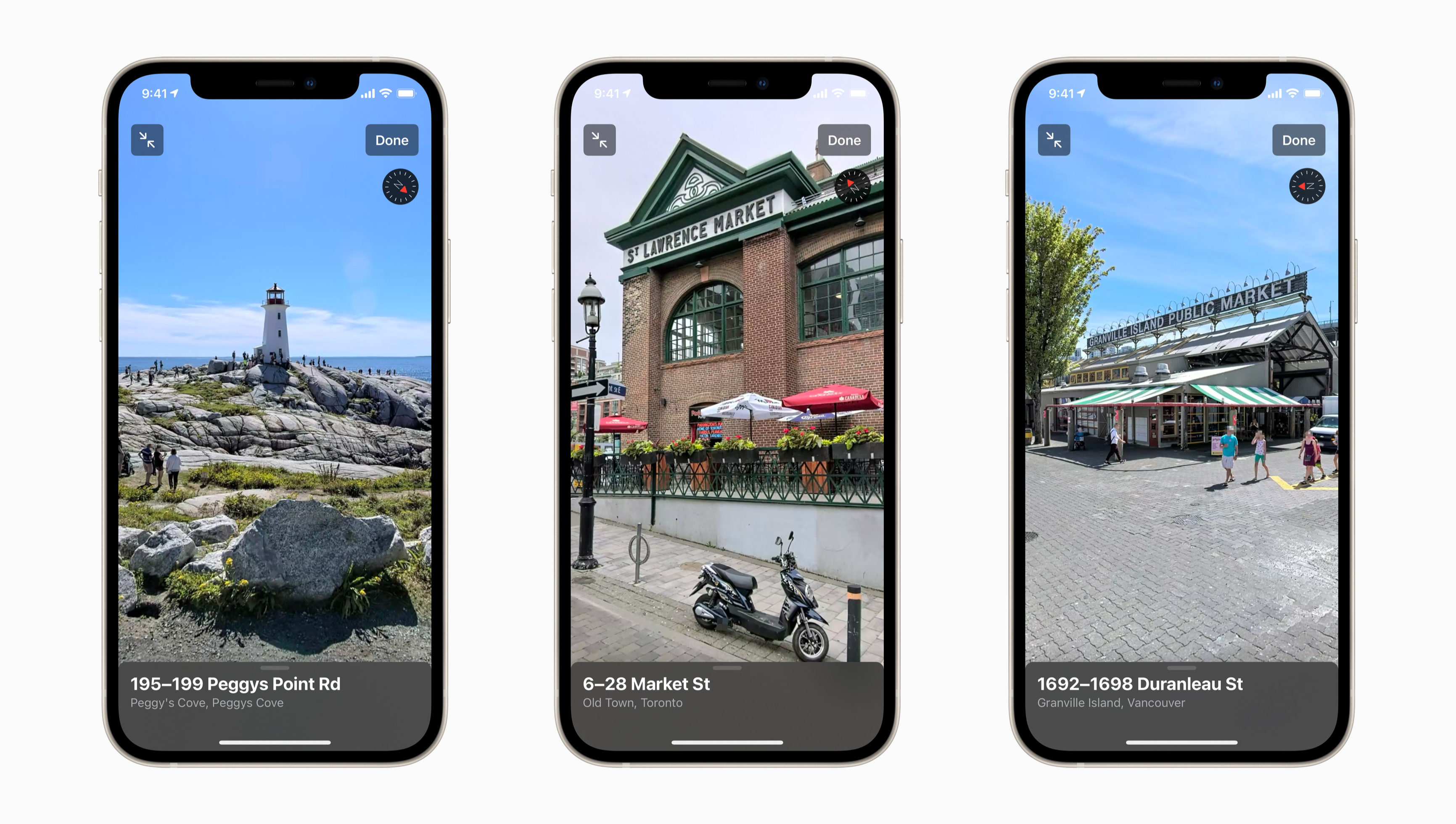 The blending of high resolution imagery with 3D photography, the seamless movement as you cruise down an avenue, the integration of real life businesses that you can click on and learn more about.

Flyover, which was announced a few years ago and is now available in more than 25 countries including Canada, offers a real-life birds eye view of major cities and destinations around the world. To access this feature, simply enter the name of a major city and select the ‘Flyover’ button from the pop-up panel. You can then move your device to control the camera position, or tap the screen to fly around your favourite city, as if whizzing about in a two-seater prop on your own virtual flightseeing tour. Users can even travel the city-state Monaco, or soar over the Vatican.

Take a page out of our book

One of the most exciting features to launch in Canada yesterday was Guides. Whether looking for popular tourist attractions, award-winning restaurants or secret hideaways only a local would know, Guides offers expert advice within the Maps app. Curated in partnership with trusted resources and media organizations, Apple Maps works with editorial teams to offer insider scoop to users. Although only a couple Canadian advisors were included at launch, expect to see more Canuck Guides popping up in the near future — including some from Can Geo Travel.

The magic is in the details

All in all, the new Apple Maps release is packed with new features and enhancements, many of which were already available in other markets. But after you dive through the transportation updates — red light camera and speed notifications, ETA sharing, indoor maps — the real magic is in the details: Canada’s rivers, its lakes and places that root us and provide a stronger appreciation of geography. A quick pinch out from Bliss Lake illustrates the immense changes to the application’s visual identity.

Perhaps Shoalts’ next adventure will be guided by Apple Maps.