A look back at the most awe-inspiring and thought-provoking visuals we published this year
By Can Geo Staff
December 21, 2018

Throughout our nearly 90-year history, great photography has been a pillar of our storytelling. After all, what better way to fulfill our mission of making Canada better known to Canadians and the world than by giving readers a window into the grandeur of this country and the lives of those who call it home? To that end, here are some of our favourite images from the past year, as chosen by graphic designer Jenny Chew. 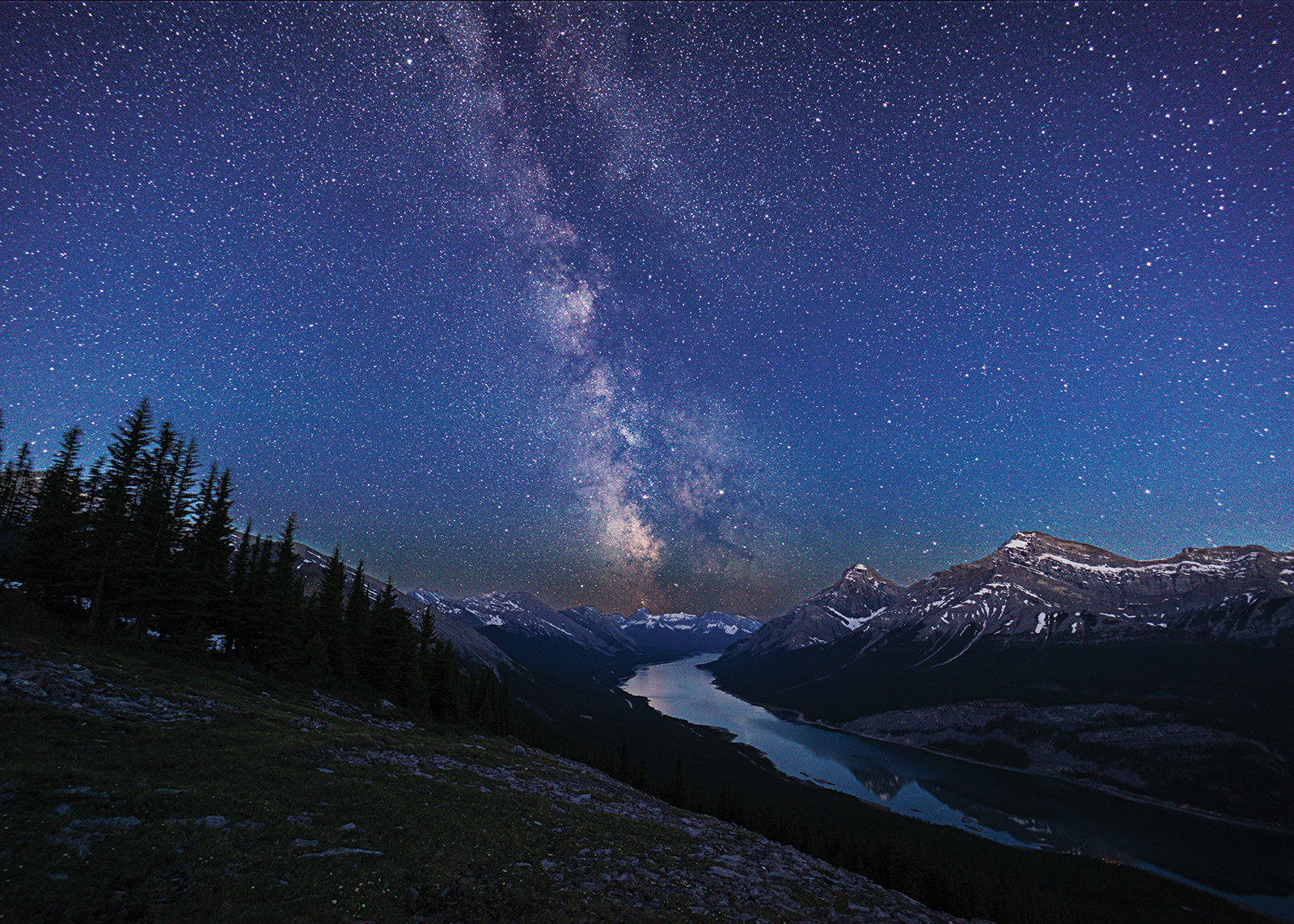 Photo by Zachary Bergamin. The Milky Way meets the Spray Lakes Reservoir south of Canmore in Spray Valley Provincial Park, Alta. Beneath the slopes of Windtower Mountain (from which this image was taken) runs the High Rockies Trail, a section of The Great Trail that follows the reservoir and heads south to the British Columbia border. This image won the “Trail Vistas” category in Canadian Geographic’s Great Trail Photography Competition.
“Exposure,” January/February 2018 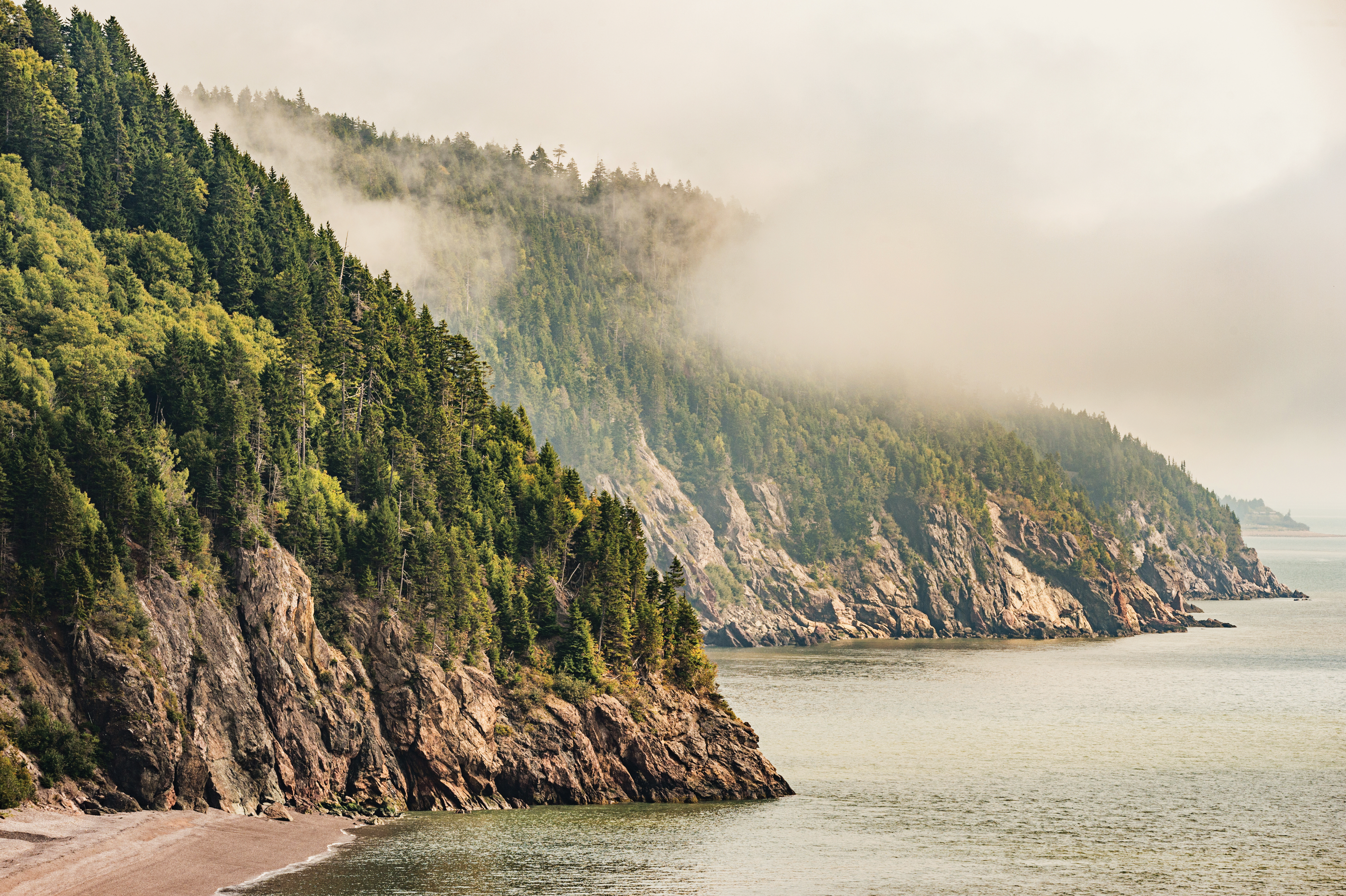 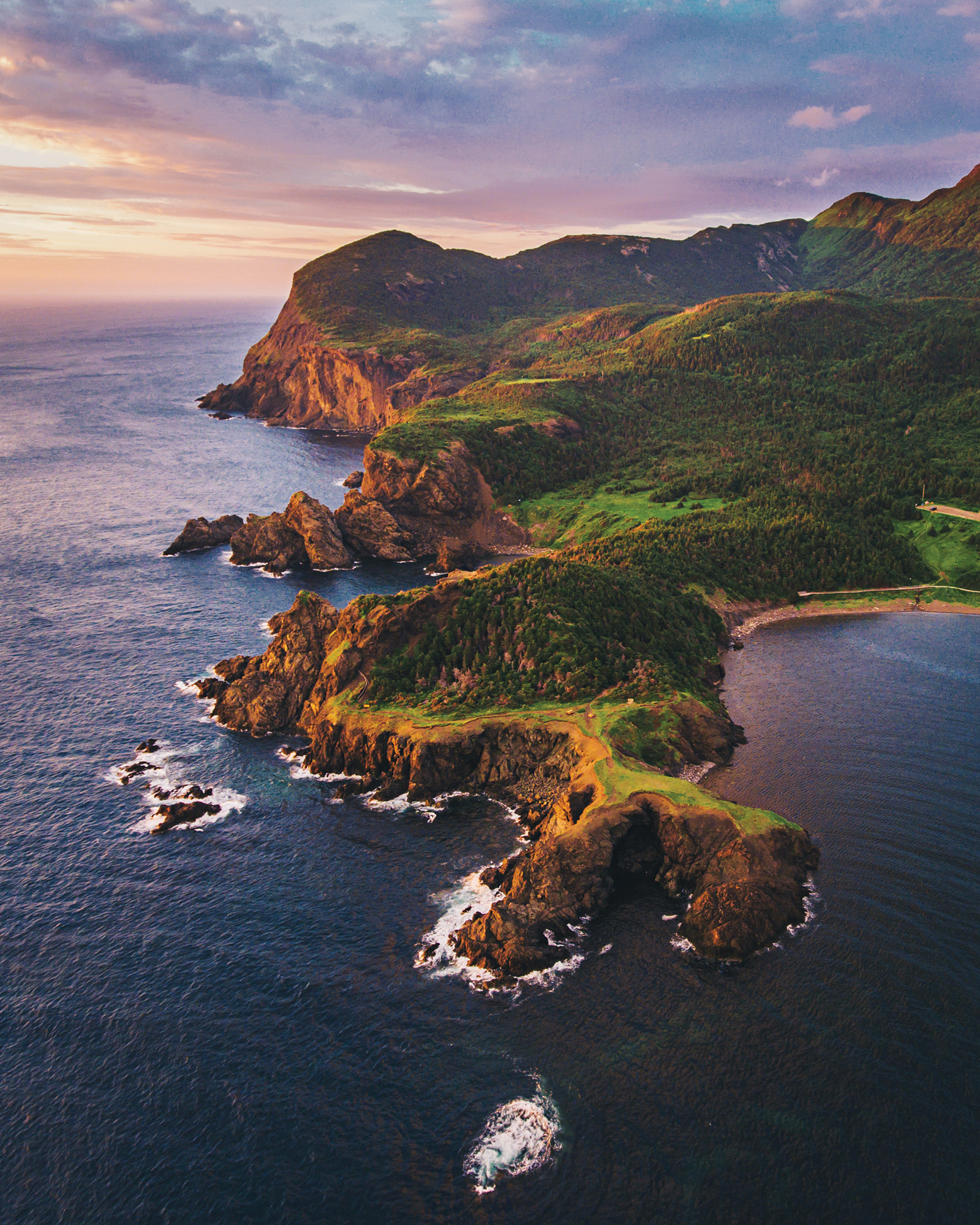 Photo by Tom Cochrane. Sea-carved cliffs rise from the Gulf of St. Lawrence at Bottle Cove in western Newfoundland’s Bay of Islands. First surveyed by Captain James Cook in the 18th century, the region is now a popular tourist destination with an extensive trail network leading to beaches, sea caves and dramatic lookout points.
“Exposure,” May/June 2018 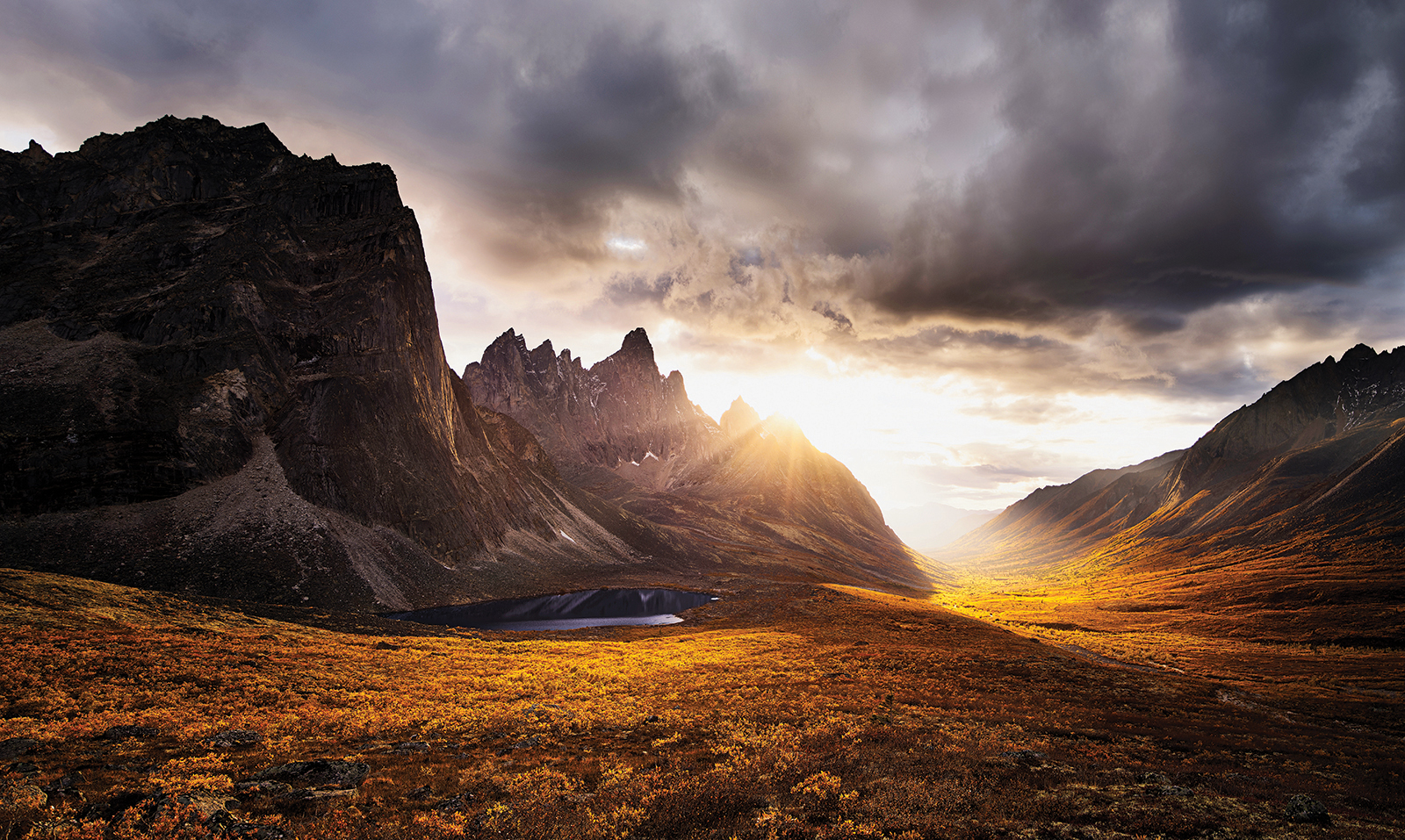 Photo by Victor Liu. Sunlight breaks through dark clouds to cast a glow over the Tombstone River Valley near the Talus Lake backcountry campground in Yukon’s Tombstone Territorial Park. The park, which is about 85 kilometres northeast of Dawson, was established as part of the 1998 Tr’ondëk Hwëch’in Final Agreement between the federal government and the Tr’ondëk Hwëch’in First Nation. The park’s Indigenous name is Ddhäl Ch’èl Cha Nän, which translates as “ragged mountain land.”
“Big Picture,” July/August 2018 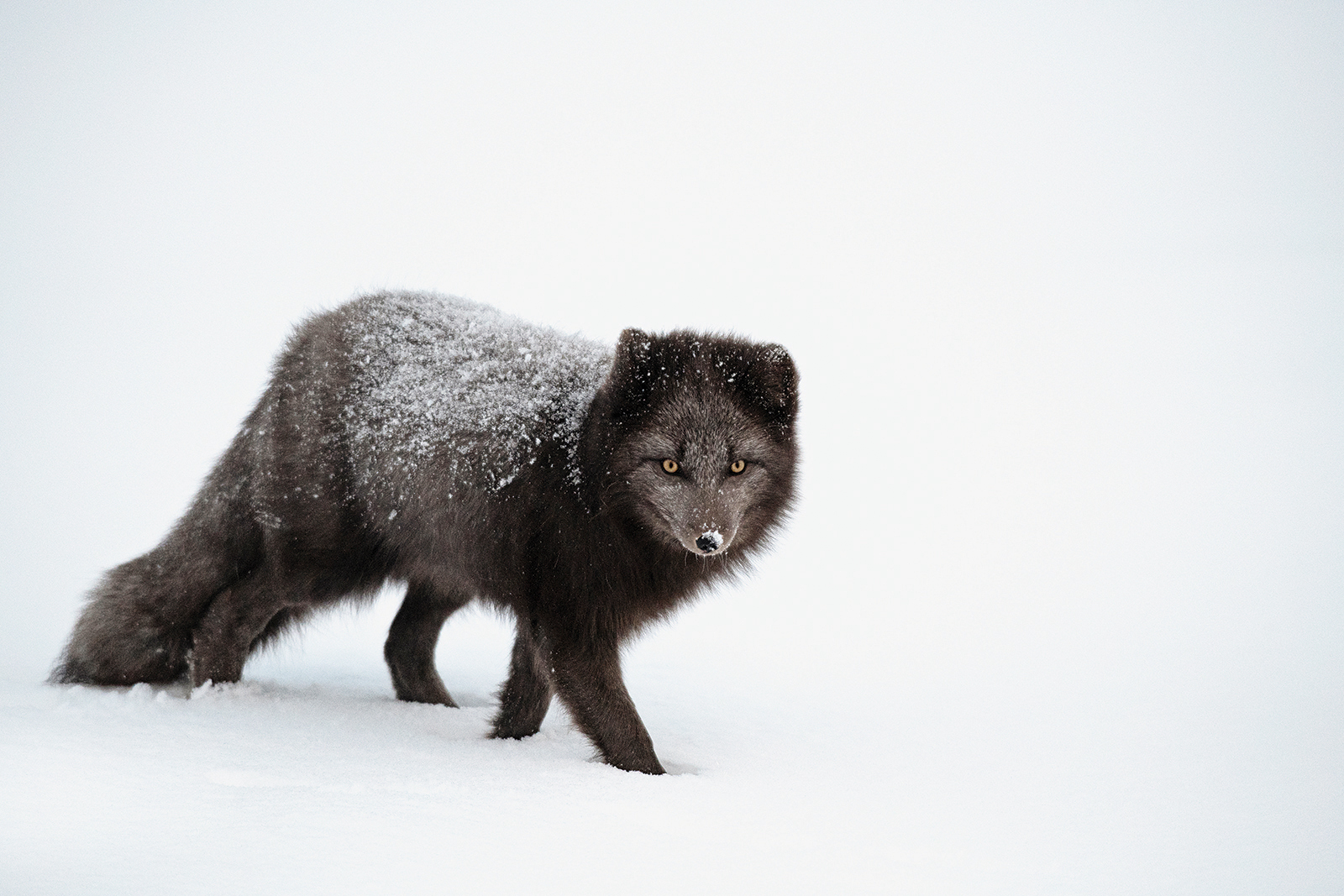 Photo by Michelle Valberg. Typically boasting white fur in winter, Arctic fox can also have a rare, genetically-distinct colour morph coat that is dark blue. This blue fox wandering Cape Churchill in Manitoba’s Wapusk National Park was the first Canadian Geographic’s Photographer-in-Residence had ever seen, despite her years of experience in the Arctic.
“Big Picture,” November/December 2018. 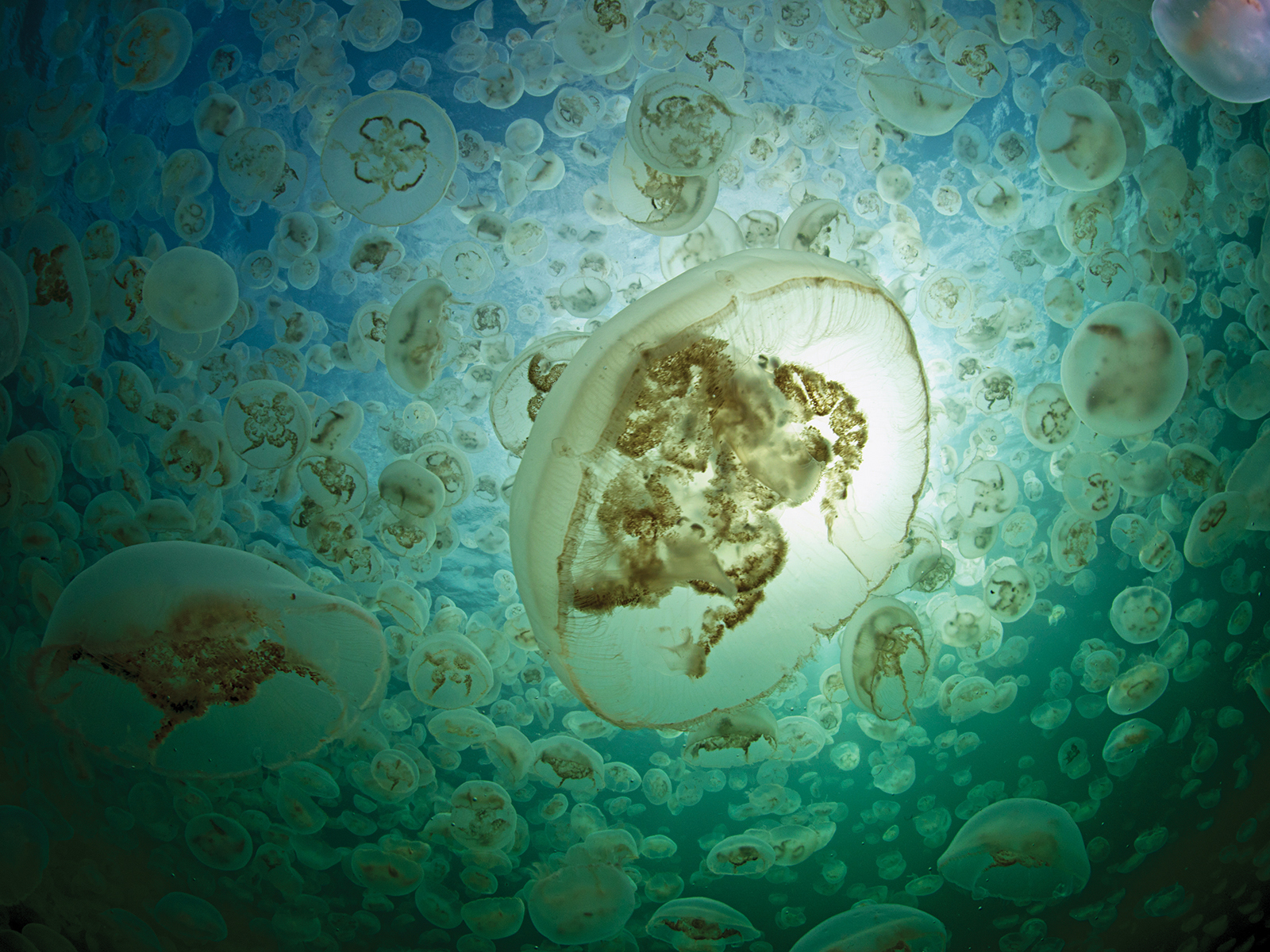 Photo by Jill Heinerth. A bloom of moon jellyfish drift through the waters of Terra Nova National Park, N.L. Jill Heinerth, an Explorer-in-Residence with The Royal Canadian Geographical Society, captured this shot during a day of exploratory dives in the area. “Exposure,” September/October 2018 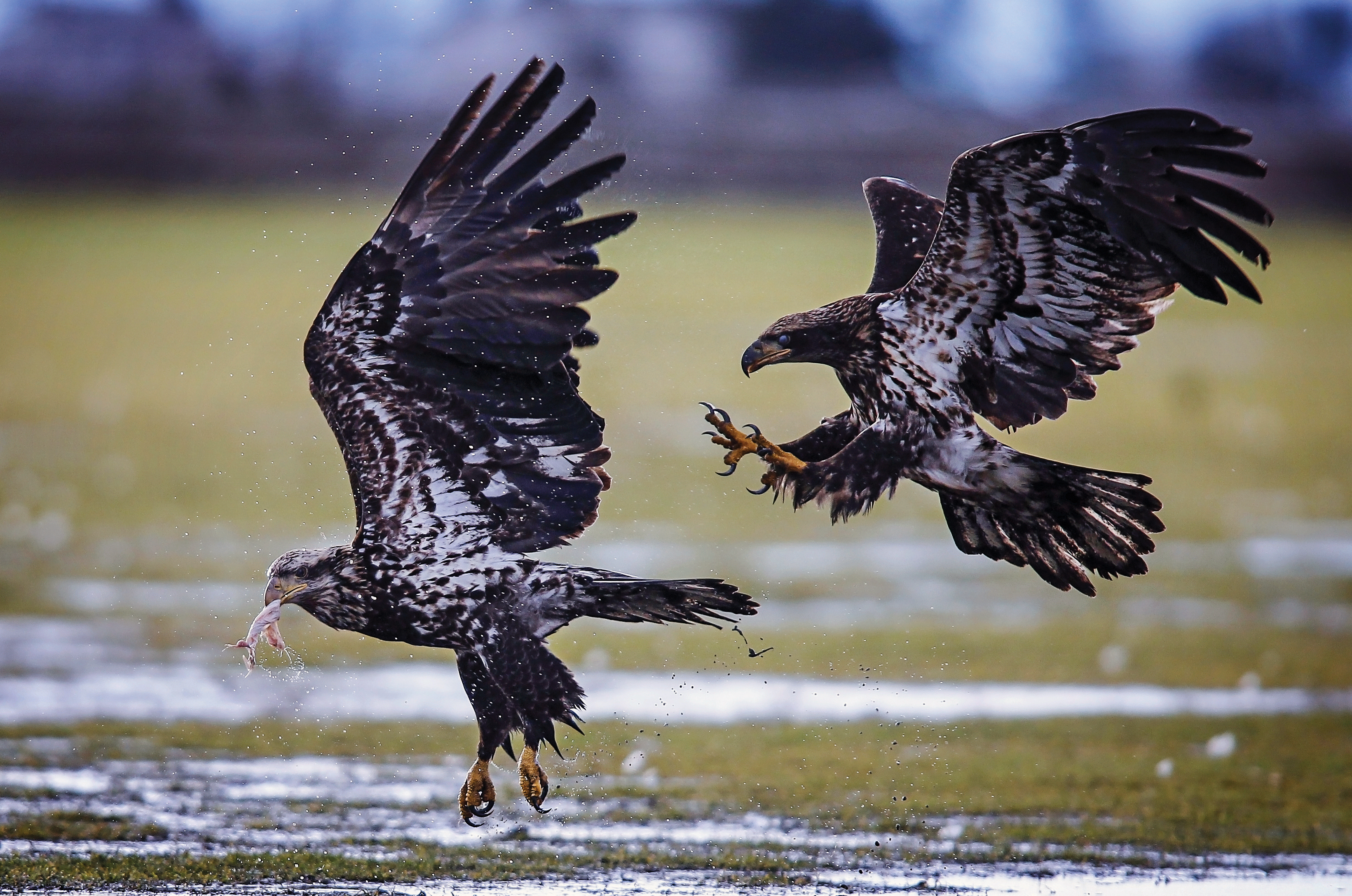 Photo by Ben Nelms. Two juvenile bald eagles fight over food in a marsh near Delta, B.C. The Fraser River Estuary Important Bird and Biodiversity Area is one of the most important avian refuges in the Americas, attracting up to 1.4 million birds per year. But increasingly, it faces pressure from the ever-expanding City of Vancouver. “Delta Forces,” July/August, 2018 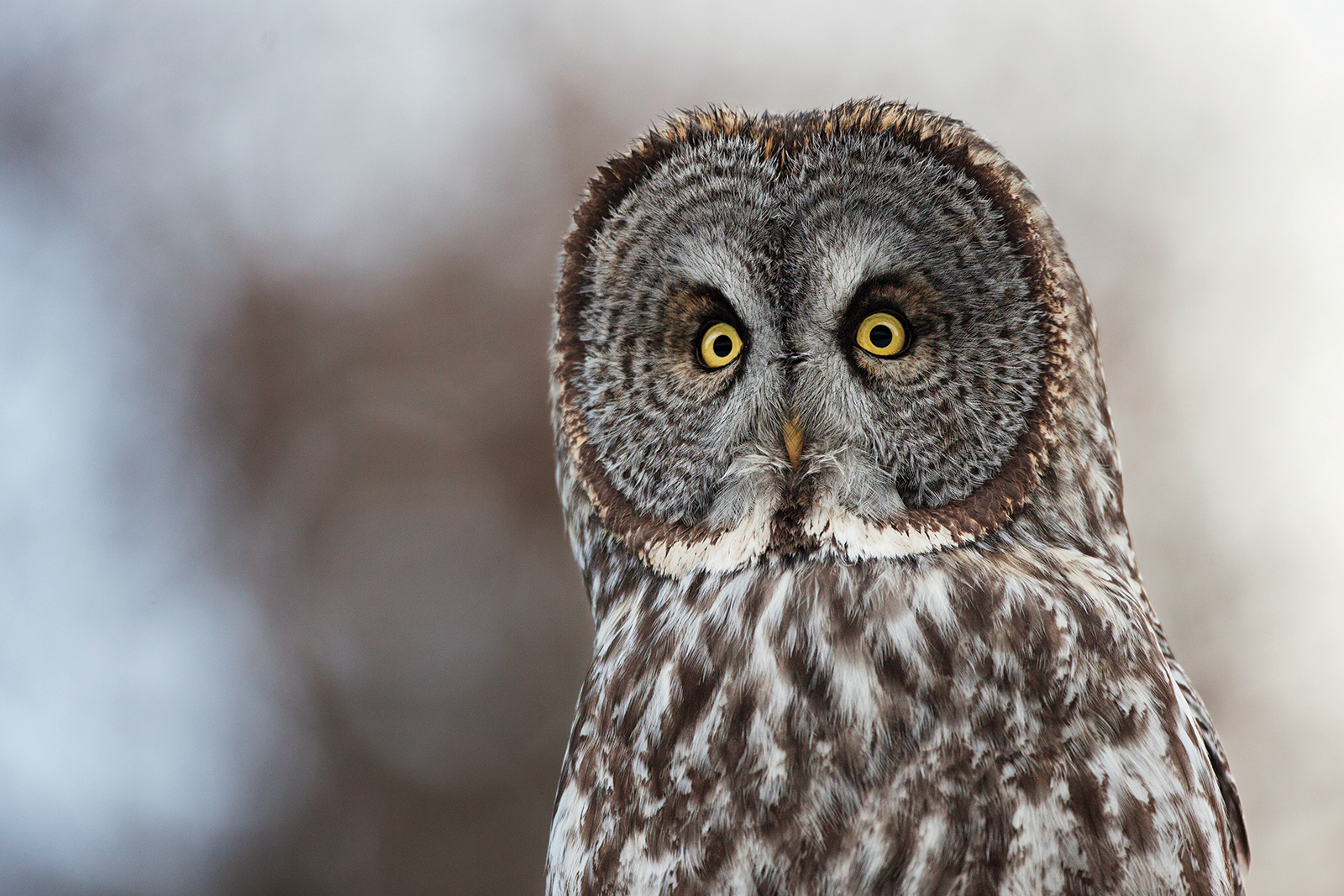 Photo by Brandon Broderick. A great grey owl poses for a portrait near Terrace, B.C. “In a snap,” March/April 2018 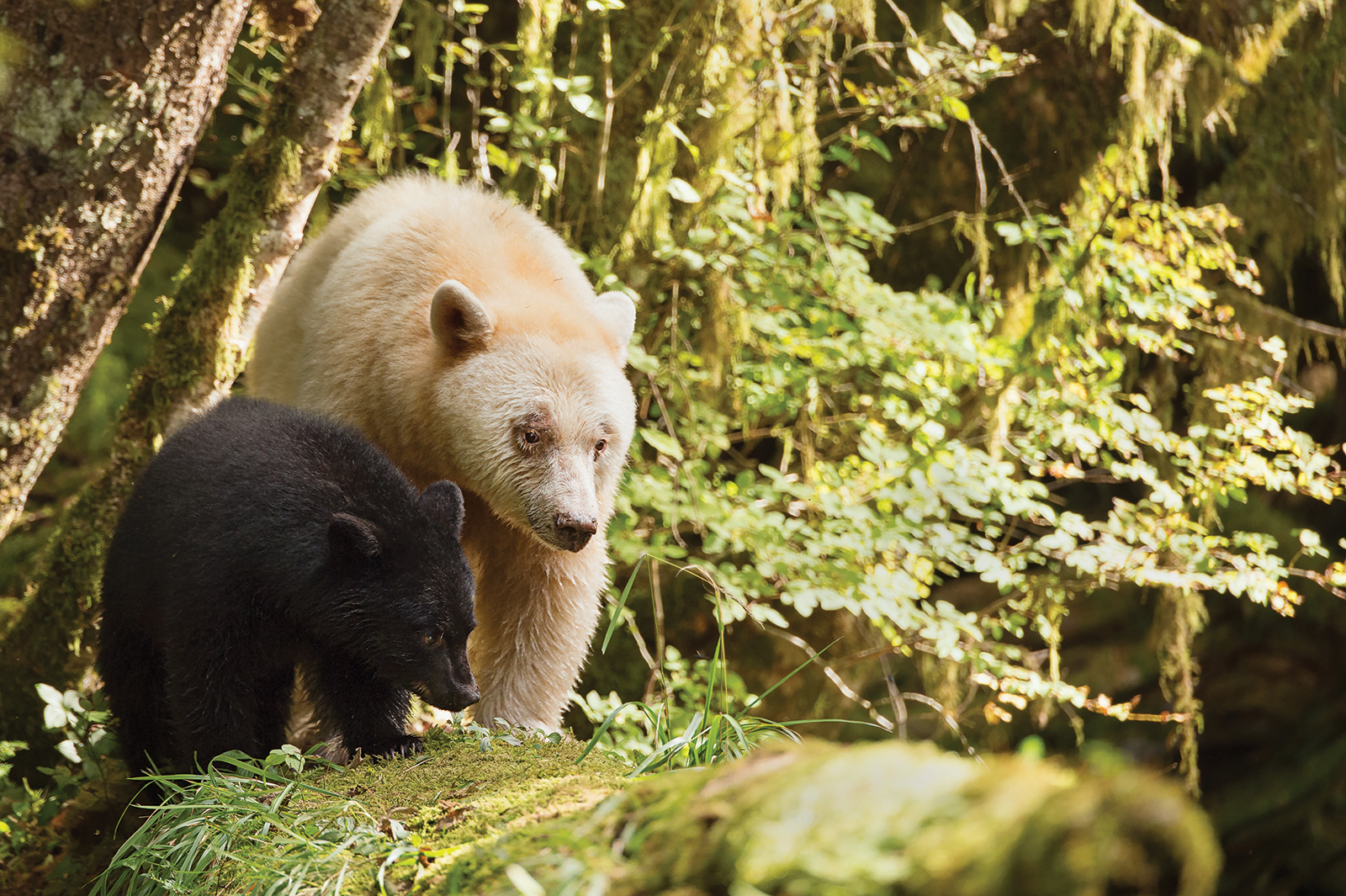 Photo by Daisy Gilardini. British Columbia’s Great Bear Rainforest is renowned for its population of rare Kermode bears, or spirit bears, which are actually a white variant of a subspecies of black bear. The animal’s ghostly colouring occurs because of a recessive gene, which means spirit bears can give birth to black cubs, such as the one pictured here.
“Big picture,” May/June 2018 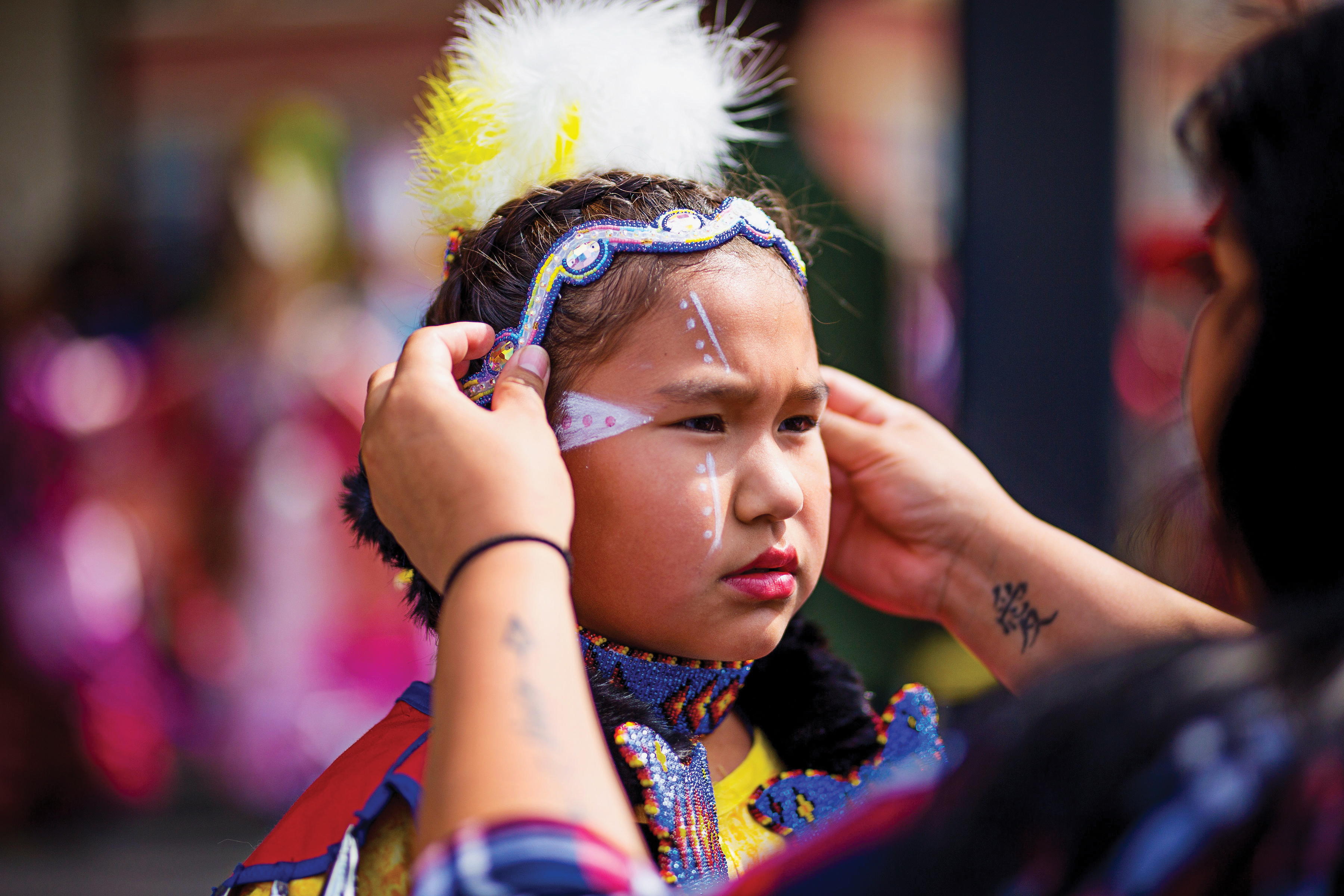 Photo by Jenn Fast. Andee Coy Winnipeg of the Siksika Nation prepares for a jingle dress dance performance at the Indian Village at the Calgary Stampede. Beyond its rodeo competitions and large-scale stage performances, the Stampede has become one of Canada’s largest public showcases of First Nations culture. “Stampede Nations,” July/August 2018 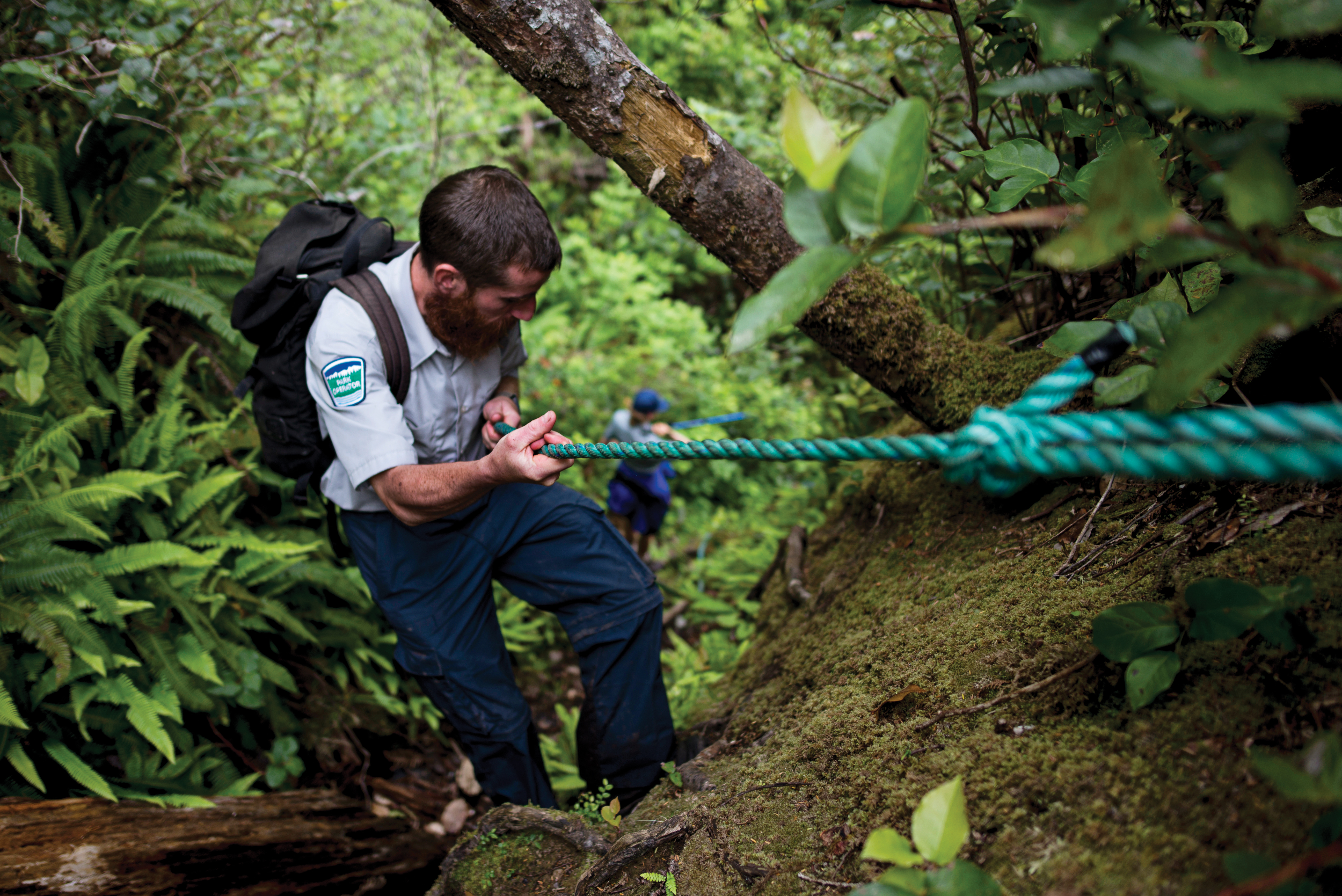 Photo by Matt Law. Park operator Liam Loftus lowers himself down a challenging section of trail in Cape Scott Provincial Park, a remote and rugged patch of wilderness on Vancouver Island’s northern coast. Park staff spend their summers practically cut off from the outside world, building trails and trekking hundreds of kilometres on foot, making a season here a test of physical and mental endurance. “The park at the edge of the world,” May/June, 2018 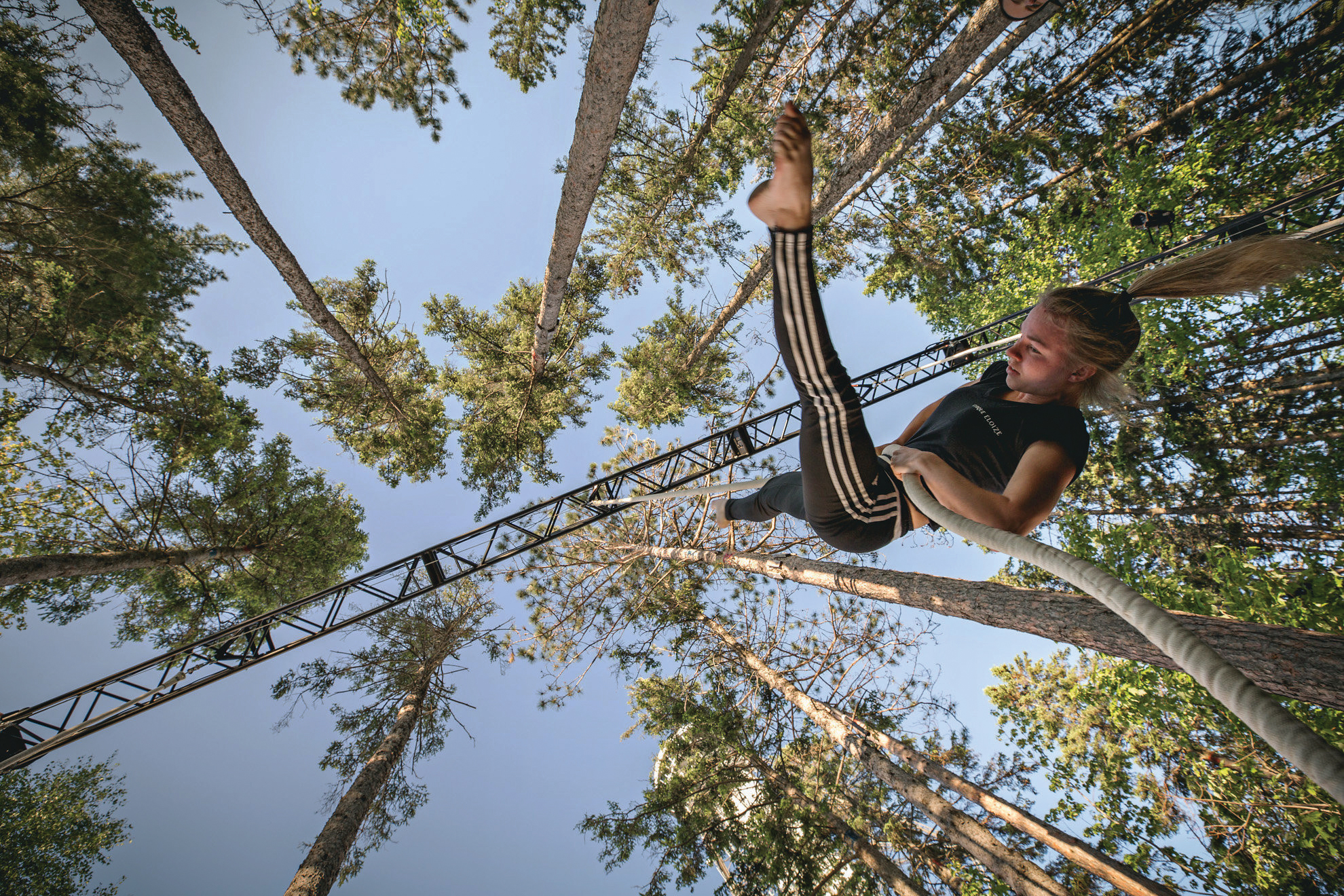 Photo by Christian Fleury. Kassandra Lebel practices an aerial routine near Cirque Éloize’s amphitheatre in Shawinigan, Que. In Acadian French, éloize refers to flashes of heat lightning on the horizon. That energy is the inspiration behind one of Canada’s most successful circus arts companies, Montreal-based Cirque Éloize, which celebrated its 25th anniversary this year. “Flying high,” September/October 2018