An Ottawa teen narrowly clinched the title of National Champion of the 2019 Canadian Geographic Challenge after a nailbiter of a final Monday in Ottawa.

David Landry, a 10th-grader at Lisgar Collegiate Institute, won the competition by a single point following eight rounds of tough questions on everything from landforms visible from space to Canadian inventions to Indigenous languages and cultures around the world.

This was actually Landry’s second crack at the top prize; he came in second behind last year’s champion, William Chapman. This year, he formulated a new strategy for the final, which was held for the first time in the new Alex Trebek Theatre at 50 Sussex Drive, the headquarters of The Royal Canadian Geographical Society.

“I really focused on visual aids more this year,” says Landry. “I focused a lot more on the video questions because you can’t repeat them and last year, I missed one word in the question that cost me the point.”

Landry took a commanding lead early in the competition, but by the penultimate round, fellow finalist Ryan Sharpe had crept to within four points of Landry. It all hung on the last round, a Dutch auction question worth up to four points for the competitor who could correctly guess the answer based on the first clue.

Sharpe, a 10th-grader from Oakville, Ont. and also a returning finalist who placed third last year, took the risk of locking in his answer on the first clue and proved correct, but it wasn’t quite enough to knock Landry out of the top spot.

Rounding out the top five finalists this year were newcomers Micah Colman of Ottawa, who finished in third place, Xavier Spano of Burlington, Ont. and Timothy Tao of Ottawa, who tied for fourth place. 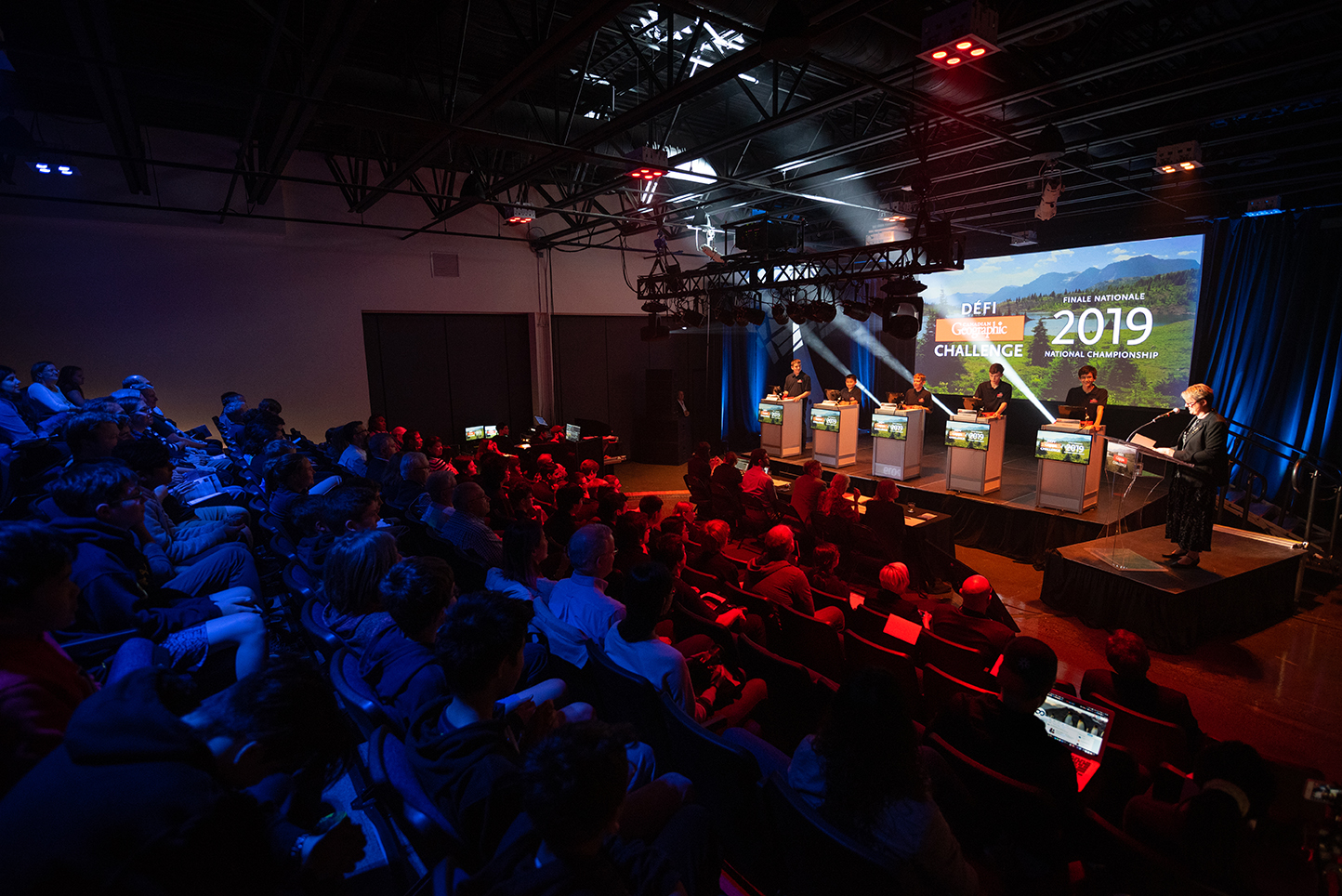 For the first time in the 24 years of the Canadian Geographic Challenge, the final was held in the RCGS’s own headquarters at 50 Sussex Drive, in the theatre named for one of the competition’s biggest supporters, Jeopardy! host Alex Trebek.

Landry says he plans to bank his $5,000 prize, and will try to nab a spot on Team Canada for the 2020 International Geo Olympiad, the senior-level geography competition being held in Istanbul, Turkey.

Thanks to One Ocean Expeditions, Colman, Spano and Tao will have the chance to explore Canada’s East Coast on a 10-day cruise aboard RCGS Resolute, stopping at Percé, Que., Sable Island, N.S., and Newfoundland’s Gros Morne National Park. Landry, who went on the trip last year, had some advice for his fellow finalists: “Take advantage of everything you do. Absorb the information and enjoy the experience as you get a good immersion into East Coast culture. Most of these places, you'll never go to again in your life.”

More than 22,500 students in Grades 4-10 participated in this year’s Canadian Geographic Challenge. The top 20 students in Grades 7 to 10 are invited to Ottawa to compete in the final rounds of the competition, which include a written test and a fieldwork test. Registration for next year’s Challenge will open in the fall; visit the Challenge website for more details. 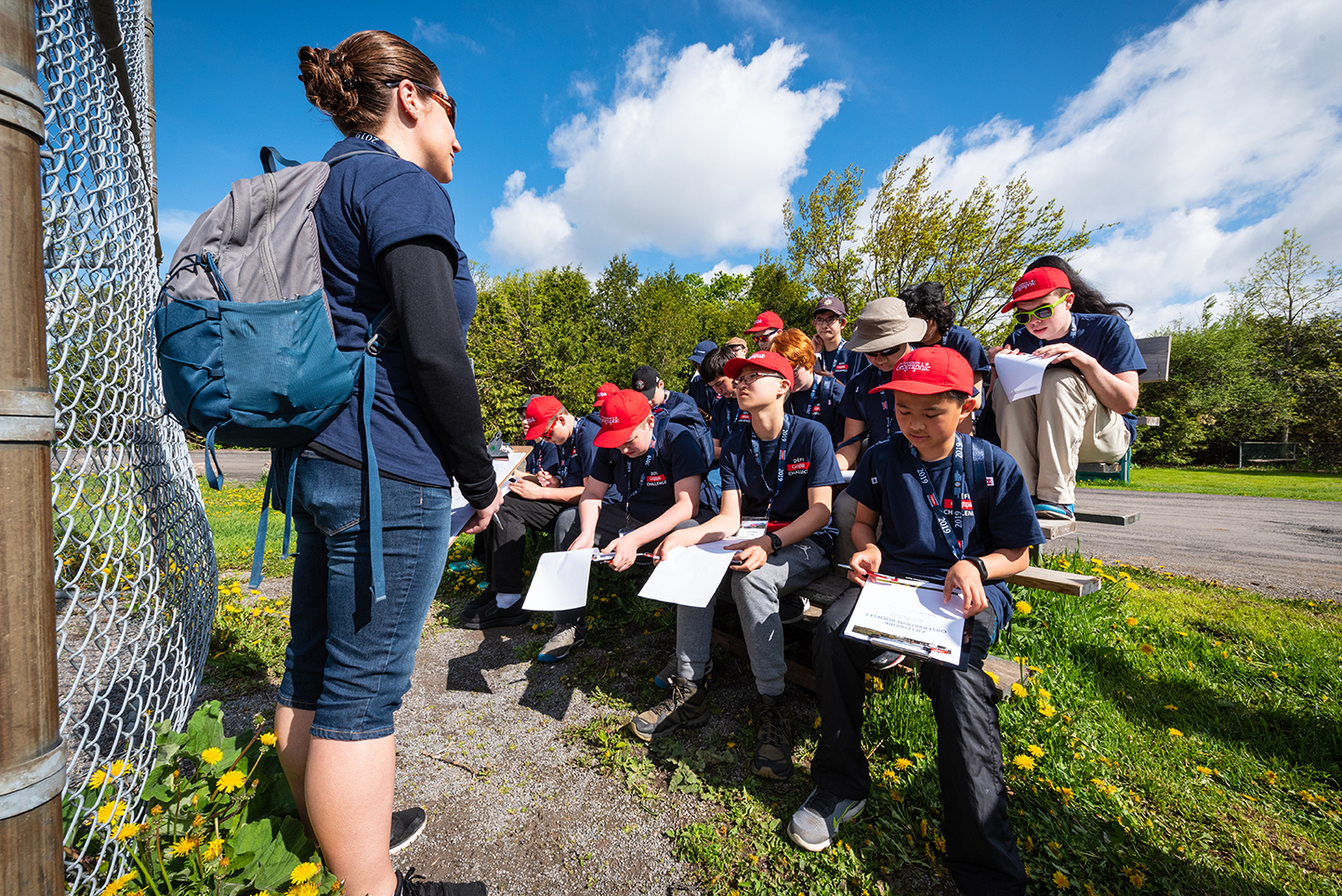 Education program coordinator Michelle Chaput briefs the 20 finalists before their fieldwork round at Ottawa’s Fletcher Wildlife Garden on May 26. 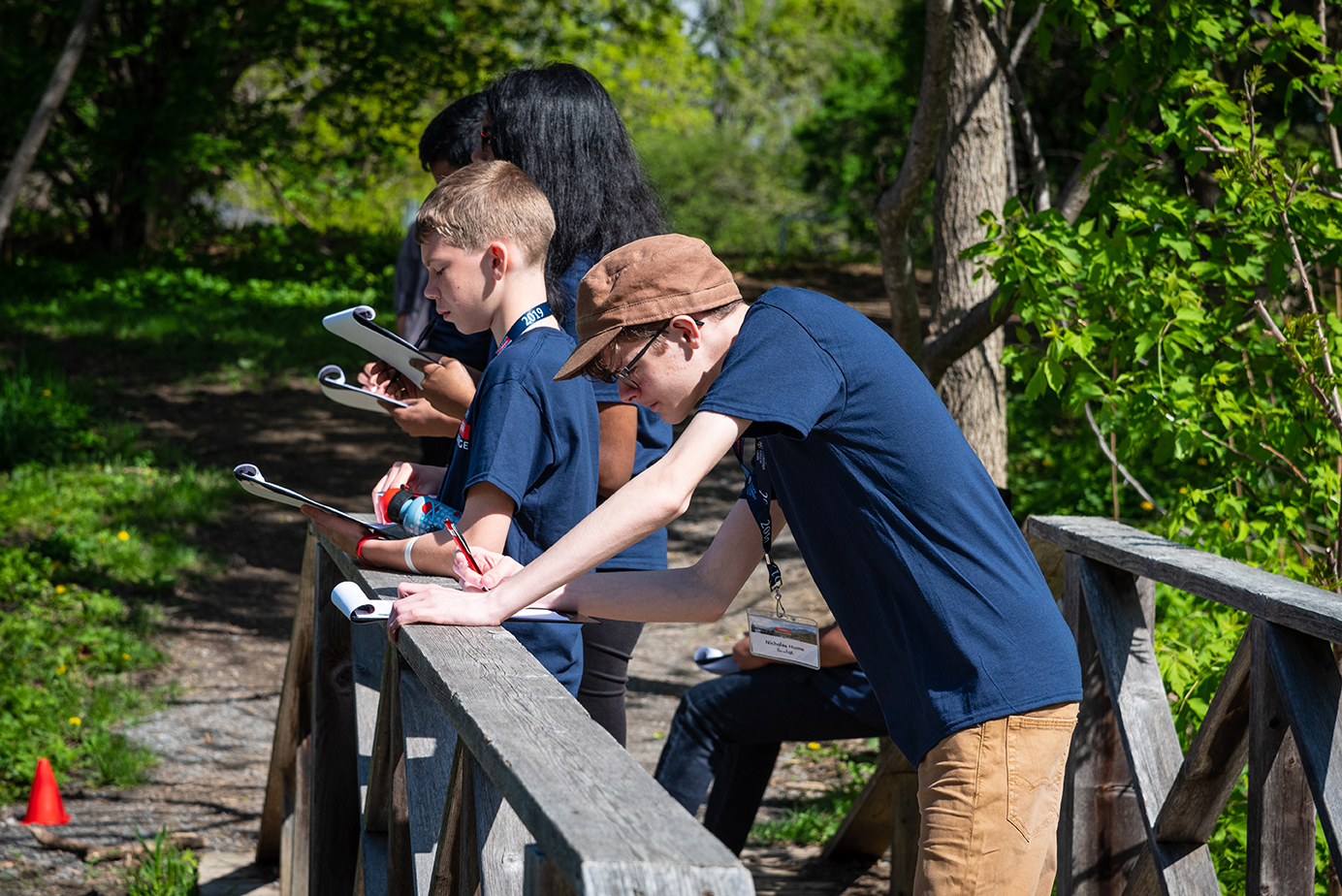 The finalists complete their fieldwork test at the Fletcher Wildlife Garden May 26. 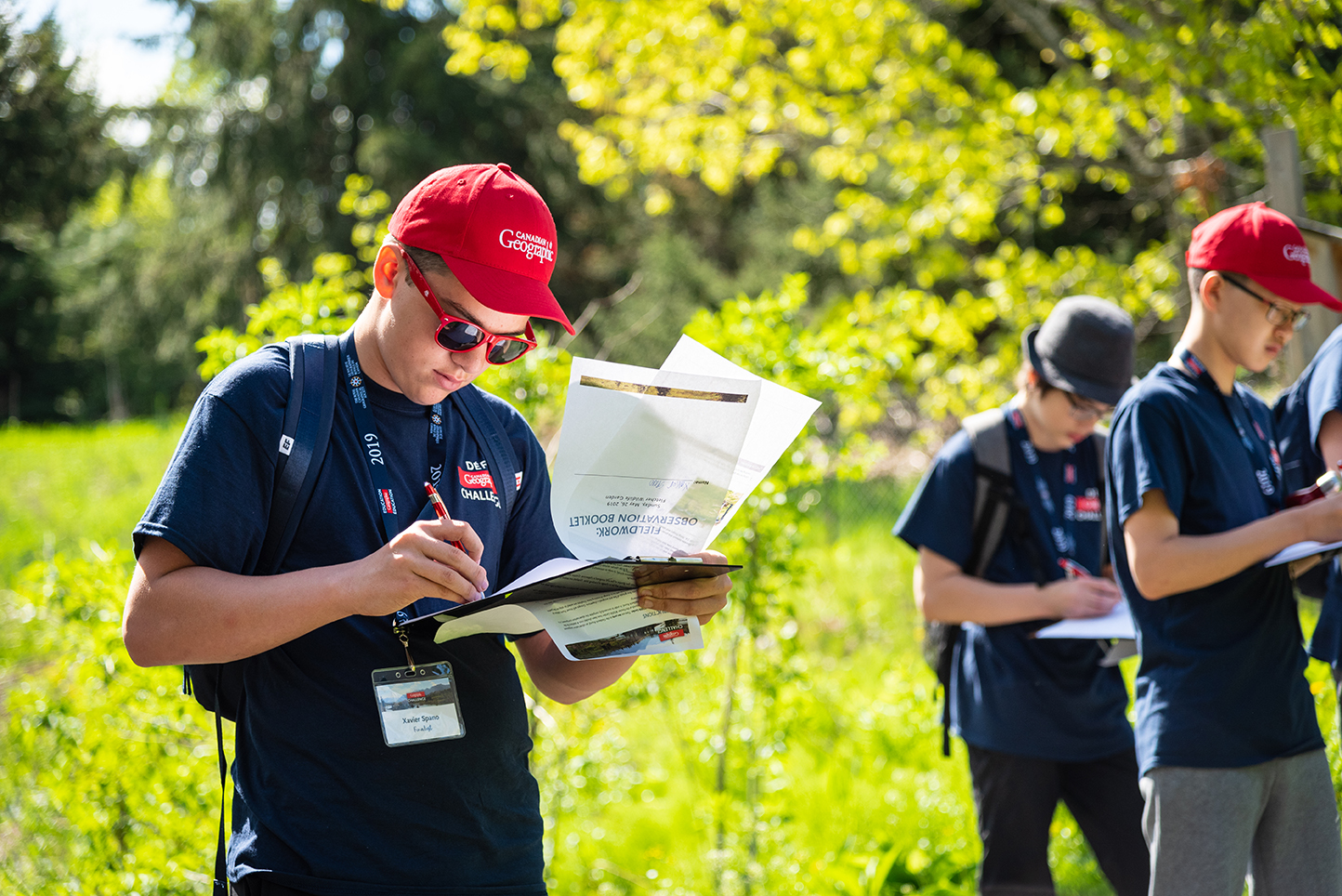 Xavier Spano, who would go on to make the top five, completes his fieldwork test at the Fletcher Wildlife Garden May 26. 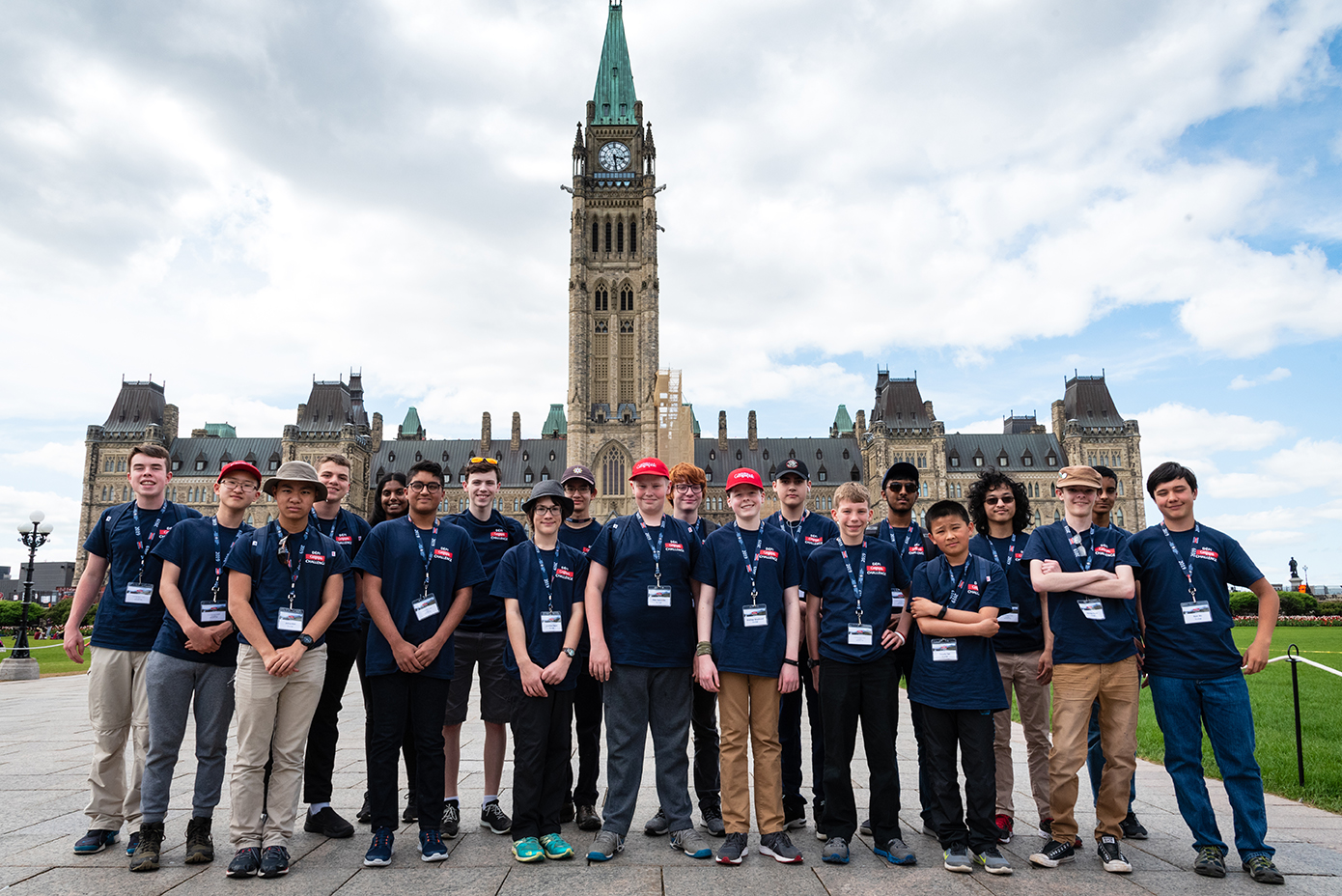 The 20 finalists pose for a group photo on Parliament Hill while sightseeing in downtown Ottawa. 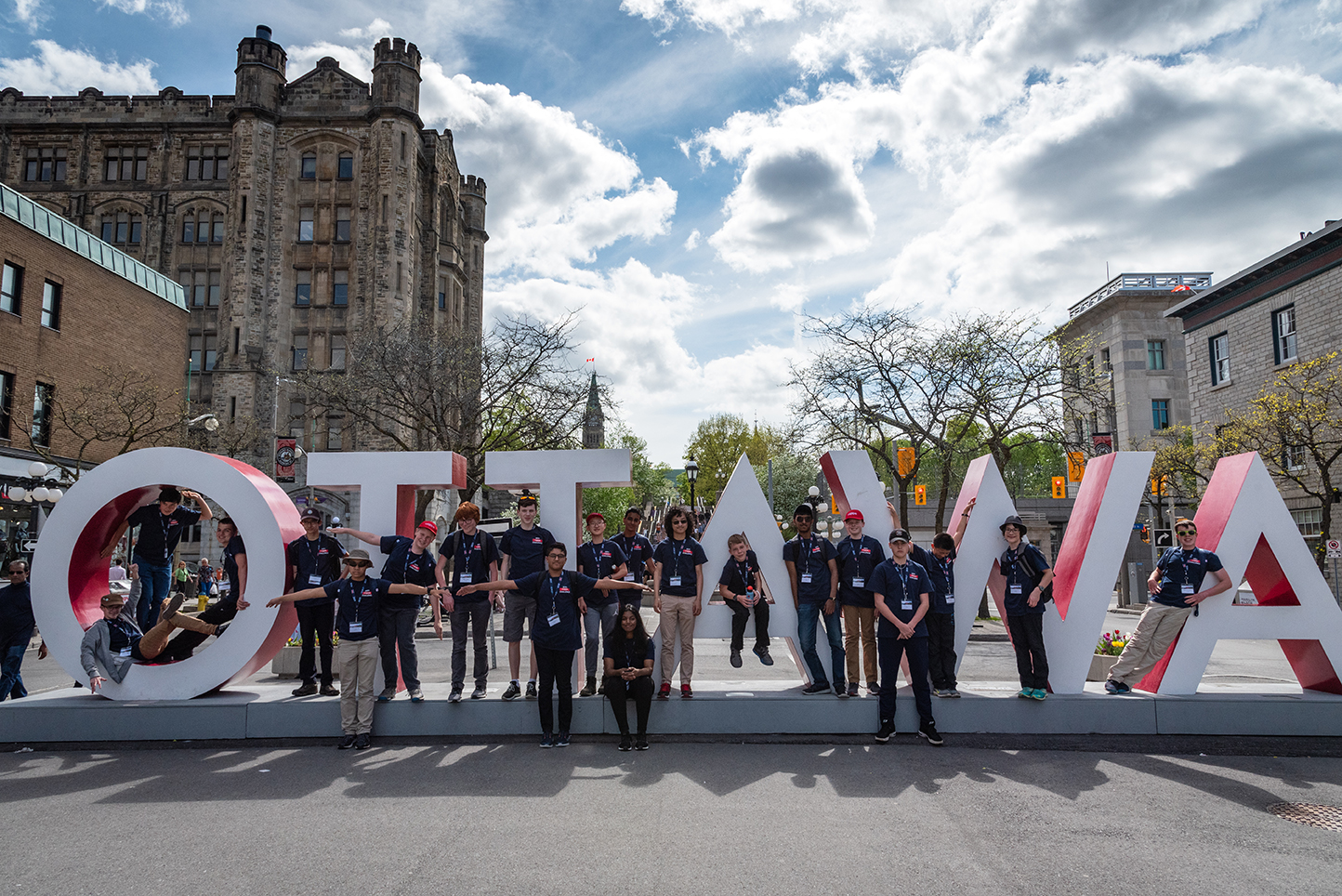 Posing with the Ottawa sign in the ByWard Market. 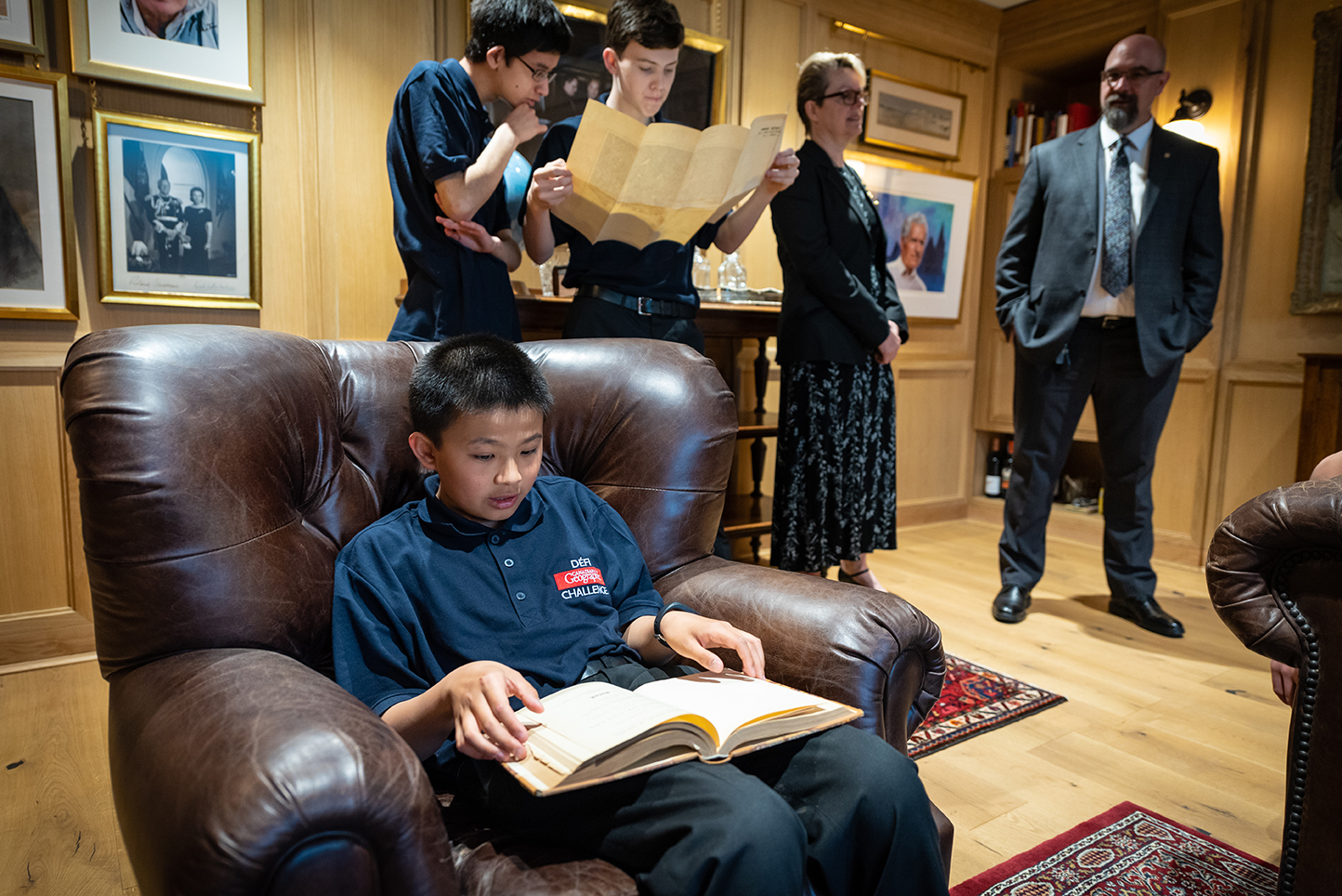 Timothy Tao, Ryan Sharpe and David Landry pore over some of the artifacts in the Sir Christopher Ondaatje Reading Room at 50 Sussex while waiting for the live final to start, as Jill Heinerth and Canadian Geographic Education chair
Paul Van Zant look on. 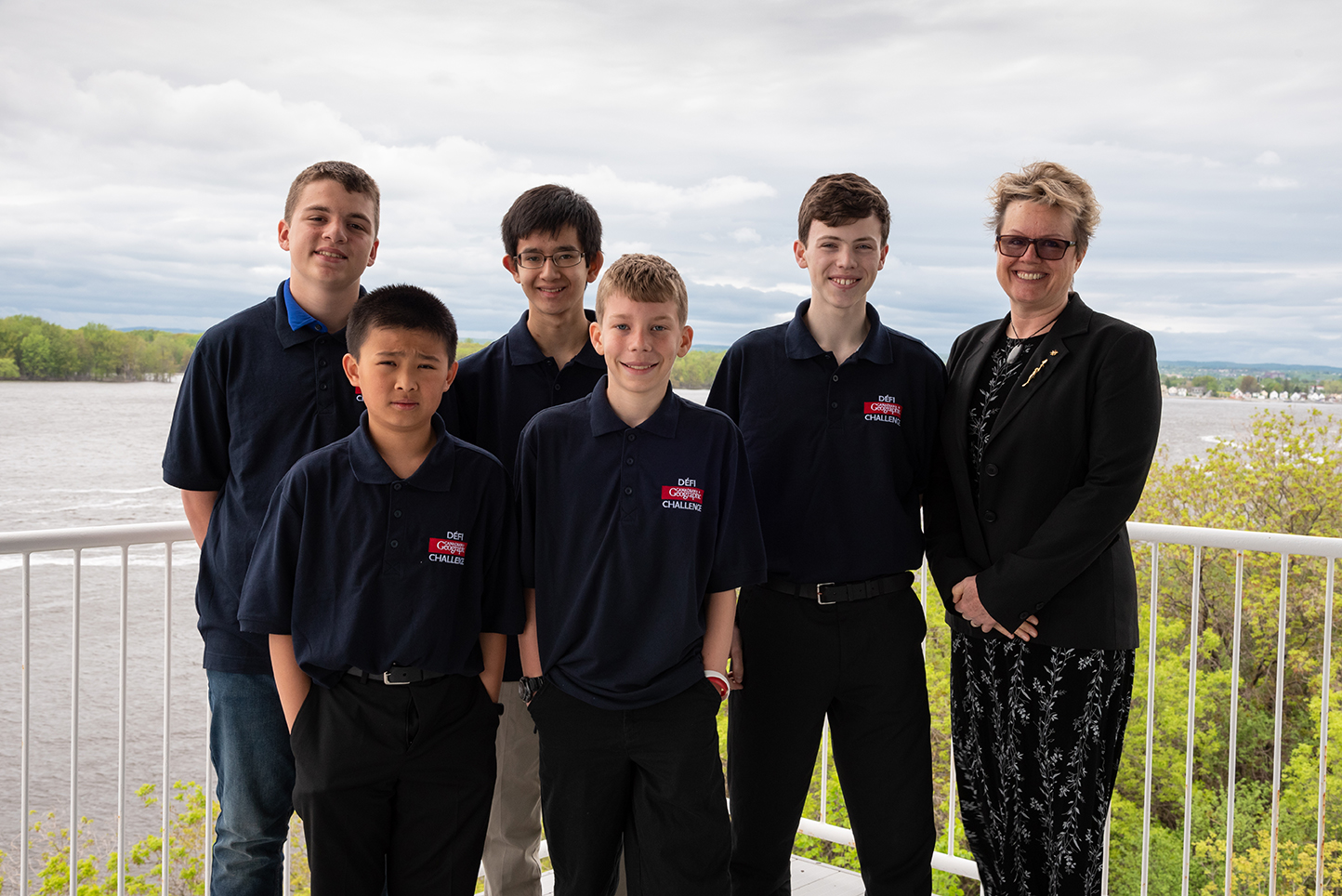 The top five finalists pose on the balcony at 50 Sussex with RCGS Explorer-in-Residence Jill Heinerth, the host of this year’s final. 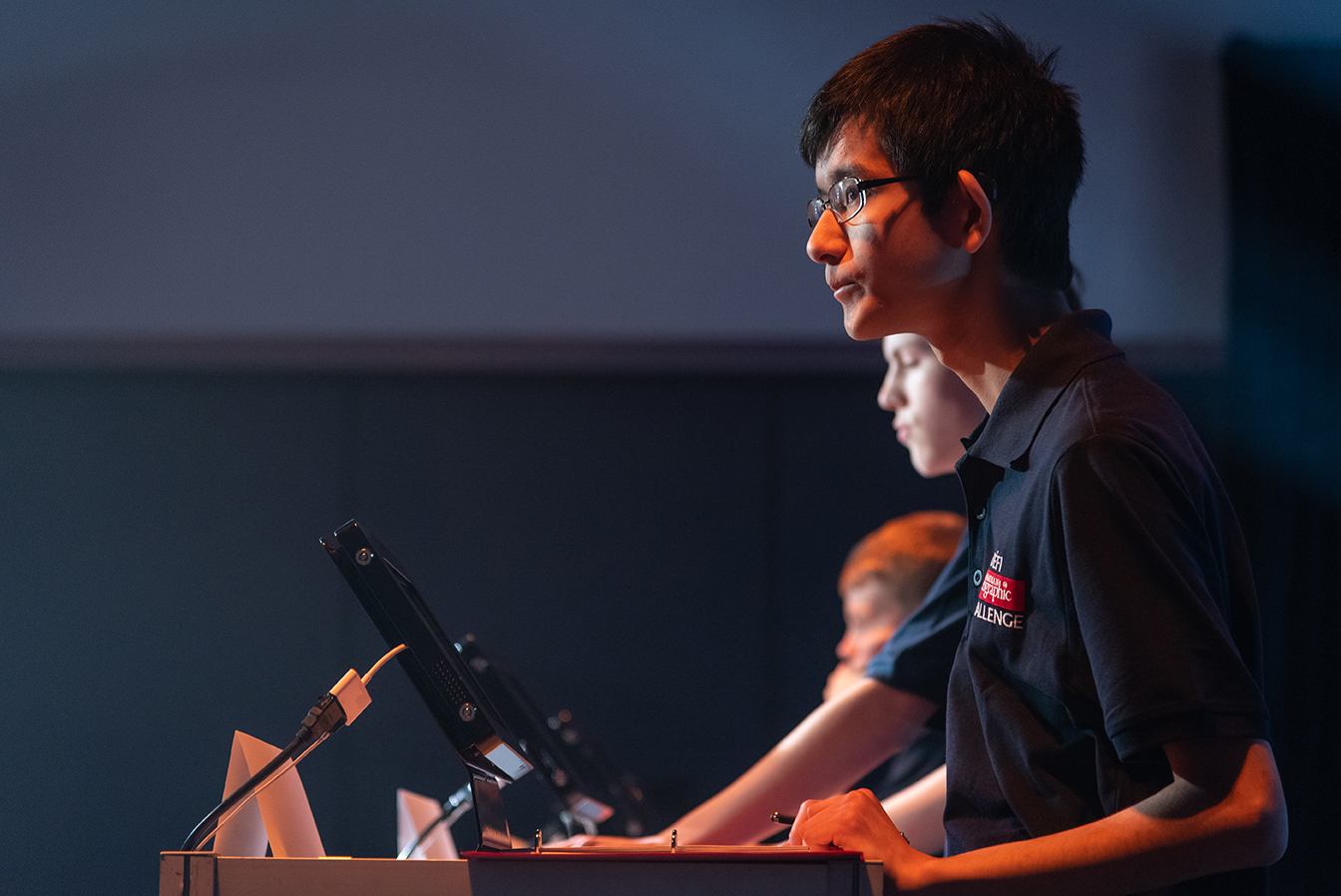 Ryan Sharpe concentrates hard on a question during the live final.