One year on, adventurer Bert terHart on his monumental world circumnavigation and future plans

Bert terHart is a British Columbia-based serial entrepreneur and adventurer who sailed non-stop around the world from November 2019 to June 2020. He’s one of only nine people — and the first from the Americas — to accomplish the feat using  traditional gear: a sextant, navigational log tables and pen and paper. Here, terHart reflects on his adventures at sea and discusses his plans to traverse Canada by canoe and on foot in 2022.

On how he caught the adventuring bug

My dad taught all his kids how to sail. One of my earliest recollections is from when I was five or six years old in Saskatchewan with him and my brother, weathering a squall in a small Enterprise [sailing dinghy]. I started sailing when I was young and it’s just been in my blood ever since. The Navy wouldn’t have me because I’m almost completely colourblind, so I joined the Army instead. When I left, I wanted to become an oceanographer, which I suppose was my first love as a vocation. But by the time I finished my service, the DFO (Fisheries and Oceans Canada) wasn’t going to sea anymore. I ended up in California writing code for healthcare professionals. My visa expired every year and I got sick of that so I brought everything back to Canada. That’s when I started thinking about getting back into sailing.

On his lifelong passion for sailing

When I was in graduate school, I almost failed out because I was windsurfing so much. I loved sailing, small-boat sailing, windsurfing — everything you can do in a boat under wind power. I had windsurfers on top of my car! I sold all my windsurfing stuff when I moved to California, though, because I didn’t think I would be interested in doing the kind of surfing popular down there. I started crewing on sailboats and doing more oceanic things. I moved to Gabriola Island, B.C. in 2007 and a month after I moved here, I bought Seaburban, the boat I still have now.

On his early expeditions

Most of the sailing I’d done pre-Gabriola had been down the coast of California and Mexico — races and things like that. As soon as I got Seaburban, I circumnavigated Vancouver Island, went to Alaska, around the Queen Charlotte Islands, all over Southeast Alaska and the Alaskan Peninsula, out to the Bering Sea and the Aleutian Islands. I used Seaburban for a couple of citizen science projects. I worked with UBC Forestry doing Sitka spruce genetic studies with a couple of PhD students on places like Kodiak Island, Afognak Island and the Kenai Peninsula. Before I left on my 2019-20 circumnavigation, I didn’t qualify for full membership in the Ocean Cruising Club. You had to have accomplished one trip of at least 1,000 nautical miles nonstop, and the longest trip I had made up to that point was about 800-and-some miles: Seward, Alaska back to Cross Sound. Even though I’d sailed tens of thousands of nautical miles, I’d never met the specific criteria!

On his historical inspirations

Looking at a map today, it’s hard to grasp how difficult it is to map something, and how unbelievably dedicated, professional, meticulous, driven, and persistent the early explorers of Canada were. The efforts of those early Canadians are humbling in every way, shape and form. What does it take for Samuel de Champlain to cross the Atlantic 27 times? What does it take for David Thompson to pack up, along with his Métis wife Charlotte Small and their children, and paddle and walk for thousands of kilometres between Rocky Mountain House and Fort William as a sort of summer vacation? I desperately wanted to follow in the wake of those people, to try to get some understanding of what it was like to endure some of the things they had to endure. I suppose that’s a big part of why I went on the circumnavigation and certainly why I chose to do it with just a sextant.

On his chosen route around the world

There is really only one way to sail nonstop around the world: you have to go around the Five Capes (Cape Horn, Cape Agulhas, West Cape Howe, South East Cape and South Cape, the five southernmost points of land on Earth. — Ed.). I sailed more than 6,000 nautical miles upwind, which is like sticking needles in your eyes. You’re going straight uphill and thrashing the boat to pieces. Every name in maritime history has had to go around those places, so when you get under Cape Horn, the weight of history suddenly engulfs you. It’s palpable. You feel the same sense of relief and purpose and accomplishment that I think every mariner who has ever tried to get around Cape Horn has felt — and that isn’t even the toughest one!

On circumnavigating the globe the “traditional” way

There’s a very small number of people who’ve actually sailed around the world nonstop, and only nine who’ve done it with a sextant. I did it without sponsorships, without financial support, not under anybody’s auspices or agenda except my own — basically the same way as when the British Admiralty gave James Cook his orders to “go over the horizon and come back in three years if you’re lucky enough.” I spent somewhere between two to three hours a day just trying to figure out where I was, not so much because I was going to hit land, but to avoid the weather. A distance of 20 nautical miles at sea may not seem like very much, but it’s the difference between, say, 40- and 65-knot winds, which is a very big deal. 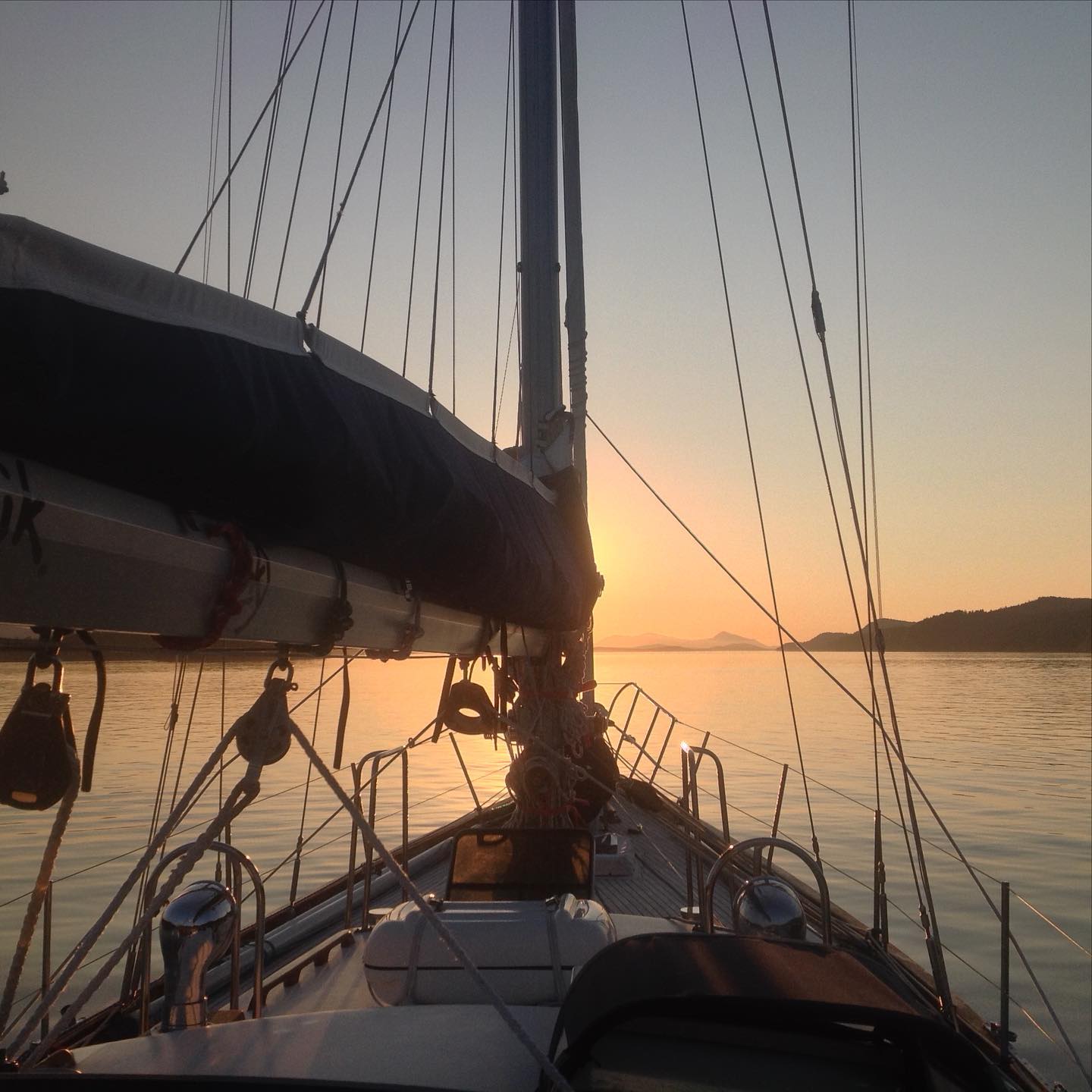 On being at the mercy of the ocean

The first time most people are on a small boat and the weather gets a little bit rough, the sound alone is enough to make them say “I’m never going to sea again,” because it sounds like everything on the boat is going to bits. The waves are smashing against the hull, everything is groaning, creaking, cracking, breaking. If the sail suddenly starts to flog it sounds like a cannon shot. The noise can be completely debilitating. Then there’s the motion. Even when there’s no wind at all, the ocean swell persists. It’s almost worse than when you’re actually sailing because without any wind to steady the boat, it’s like rolling downhill in a working clothes dryer. There’s very little downtime because if you’re not actively engaged in sailing the boat, you’re engaged in fixing the things you broke while sailing. It’s like any other machine with mechanical breakdowns: sails to sew, rope to splice, bent weathervanes, a generator that’s shorted out. Water’s a very corrosive environment that doesn’t agree with anything except itself. I took aboard the boat all the important books I’d never read cover to cover: The Tibetan Book of the Dead, the Qur’an, the Bible, the Teachings of Buddha. I never opened a single one! I never slept more than two hours at a stretch, and no more than four hours on any day of the trip.

On his plans for future adventures

In 2022 I will attempt a solo canoe crossing of Canada in a single season, in the footsteps — or paddle strokes — of Fraser, Thompson, Mackenzie, Fidler and all the early cartographers. I’ll navigate with a sextant and end up in those places of historical significance — for example, the confluence of the North and South Saskatchewan rivers, which from a fur-trading and mapmaking perspective was a very significant landmark — and I’ll take pictures of what it looks like now. I’m a very proud Canadian and would like to see Canada in the same way that First Nations peoples did: on foot and in a canoe. I plan to leave on April 1, 2022 and I expect the journey to take somewhere between seven and eight months. Weather permitting, I’d like to get all the way out to the Atlantic Ocean.

On how he prepares for his expeditions

You have to practice what you’re going to be doing. You never rise to the occasion, you always fall back to the level of your training, whatever that might be. If your level of training is abysmal, you can expect an abysmal experience. You need to practice the fundamentals, which in sailing is the very basic experience of throwing stuff off the boat and retrieving it. How could you grind in 300 feet of rope in the middle of a Southern Ocean gale if you’ve never actually practiced hauling stuff back onboard, at the dock or when it’s calm? It speaks to how unbelievably well-practiced the original cartographers, mapmakers and surveyors were. They could do things in their sleep that you and I would spend a literal lifetime learning how to do. When David Thompson came across the Rockies, he and his crew went through a pair of moccasins every day. In those situations, who makes your shoes? Practice also reduces the anxiety you would have when things really begin to go sideways. You can get away with some very poor planning because humans are unbelievably adaptible and tough. We as a species are capable of things that defy imagination, but there’s no substitute for practice. None.