Oh Canada jay! The story behind an icon-in-the-making

The first time I hand-fed a Canada jay, I was nervous. I’d read about how the notoriously bold bird would make a beeline toward any outstretched hand with food on it, determined to partake of whatever was on offer. As I stood on the snowy path in Ontario’s Algonquin Provincial Park, I was gripped with performance anxiety. Would the Canada jay like me? Would it be offended by the Eurasian bullfinches embroidered on my mittens?

And yet I was eager to meet a bird so memorable that it boasts at least 30 different names, each conjuring a distinct aspect of its personality, from the familiar “whisky jack” — an anglicized version of the Cree wîskicahk — to the colourful “camp robber” to the folkloric “gorbey” — derived from the Scottish word for glutton. There’s also the carnivorous-sounding “moose bird,” the frankly unsavoury “grease bird” and the potentially aggressive “venison hawk.”

Out of nowhere, a large and fluffy charcoal-backed bird swooped down, landed on my mitt and began to pick through the trail mix buffet. With its long tail, dark hood and bright white forehead patch, it resembled a cute, if overgrown, chickadee. Before digging into the dried cranberries, the jay tilted its head and sized me up with inquisitive black eyes. I held my breath as we stared at one another, but the Canada jay didn’t flinch. Unexpectedly tame around people, it regarded my mitt as its turf — and it knew exactly what it wanted. 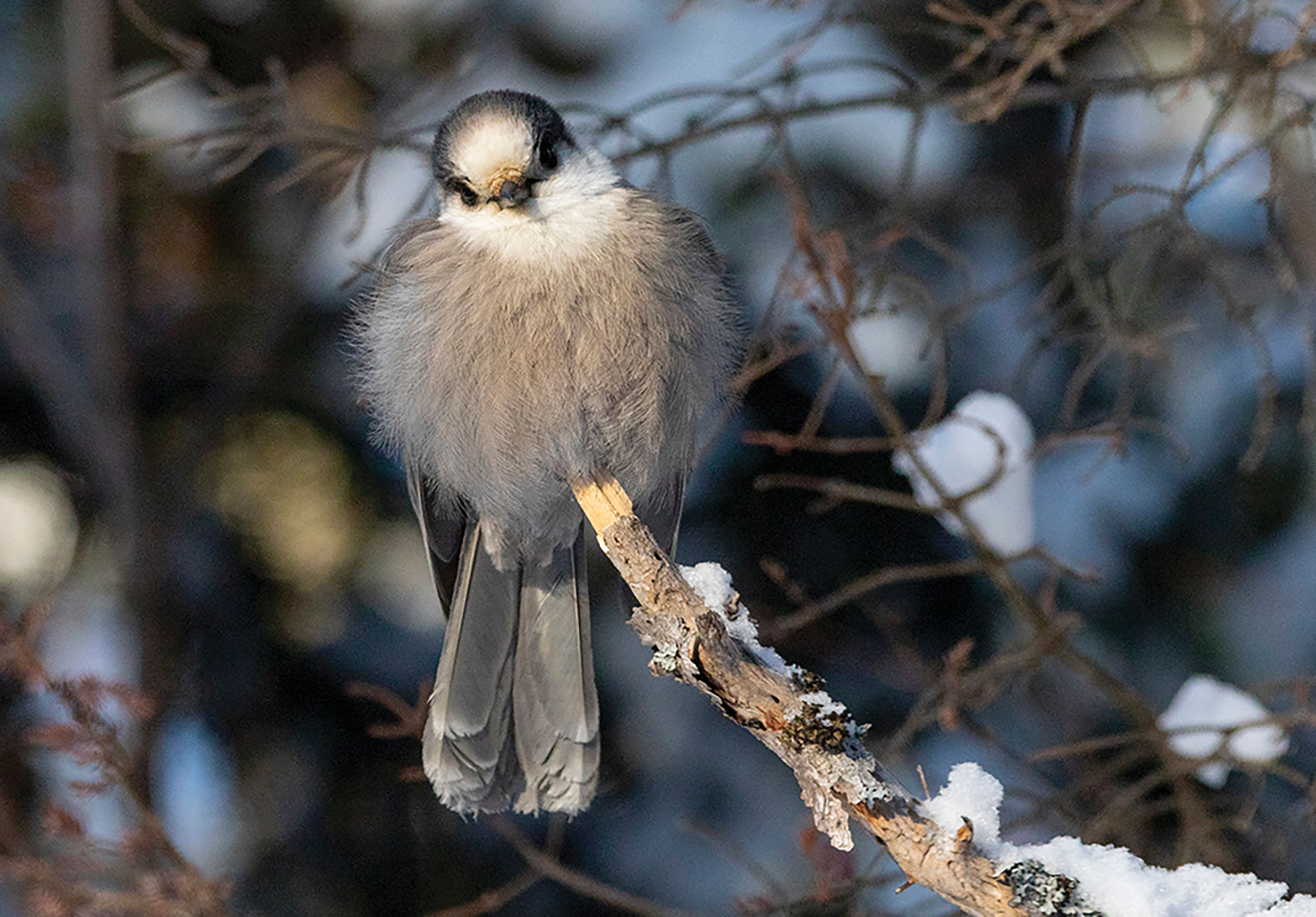 When puffed up in winter the jay’s feathers serve as a full-body parka. (Photo: Tina Sawicki/Can Geo Photo Club)

When I first read about Canada jay behaviour in A.C. Bent’s Life Histories of Birds, their boldness seemed improbable. Did these birds really break into loggers’ tents, rummage around for food, pry open boxes and steal whatever edibles they could from campers’ tables — everything from bacon to baked beans to soap? But seeing this one’s insatiable appetite and wily ways made me realize these stories were no joke.

I quickly learned that this fluffball of a bird is one of Canada’s hardiest, most intrepid species. It was also the official winner of Canadian Geographic’s National Bird Project, a countrywide contest held in 2016 to choose a national bird of Canada. The Canada jay not only inhabits every province and territory; it upends our expectations about bird behaviour and forces us to dispense with the pejorative expression “bird brain” once and for all. If anything, a Canada jay’s bird brain is something to be envious of — it boasts uncommon intelligence, a prodigious memory and a genuine curiosity about the world around it. Add to that the jay’s lack of timidity around people, and it’s no wonder Dan Strickland noted that this bird “is part of the psyche and national character of Canada.” Strickland, a retired Algonquin Provincial Park chief naturalist, has tracked Canada jays since the 1970s and was the driving force behind restoring the bird’s common name (it had long been known as the grey jay). 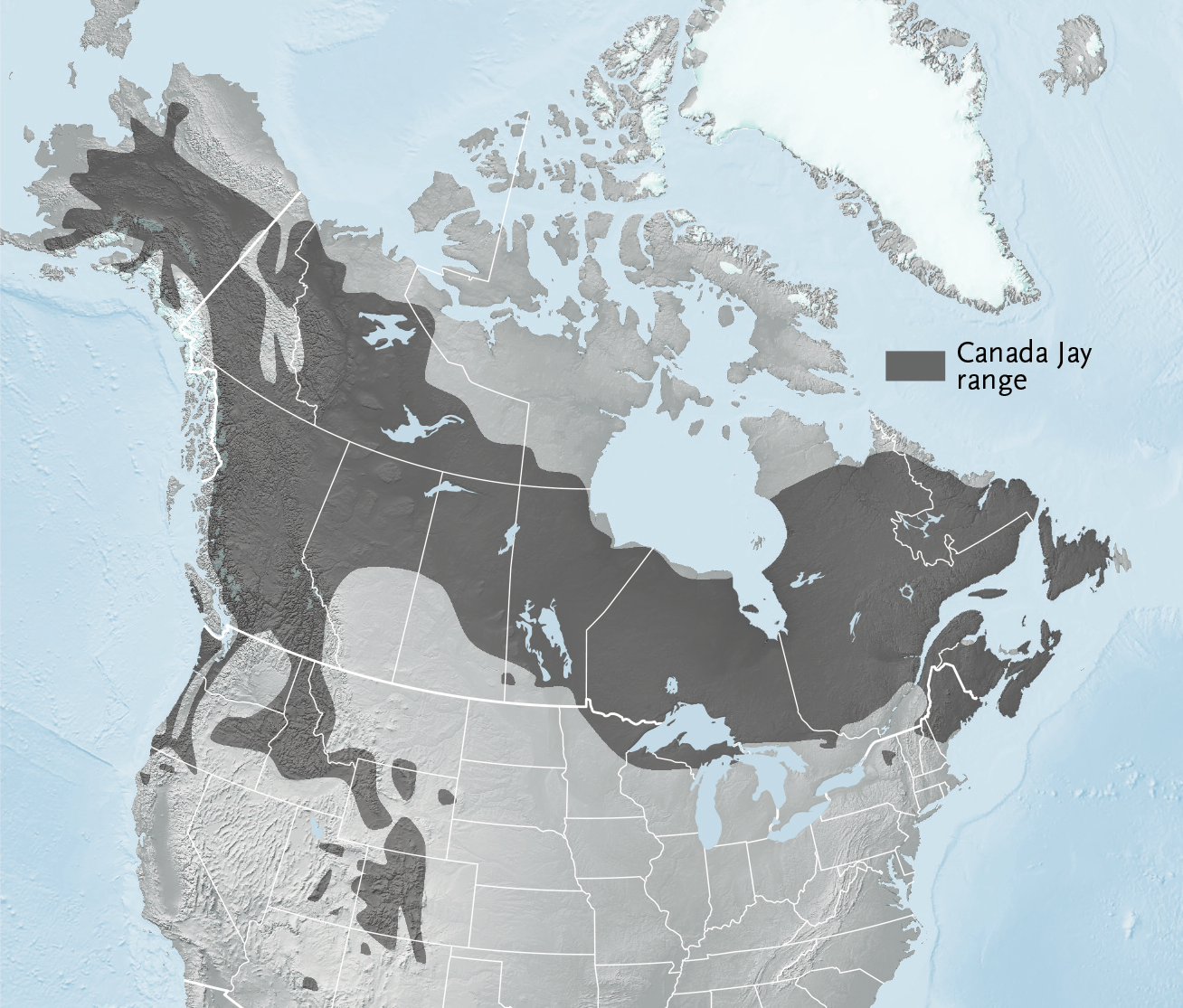 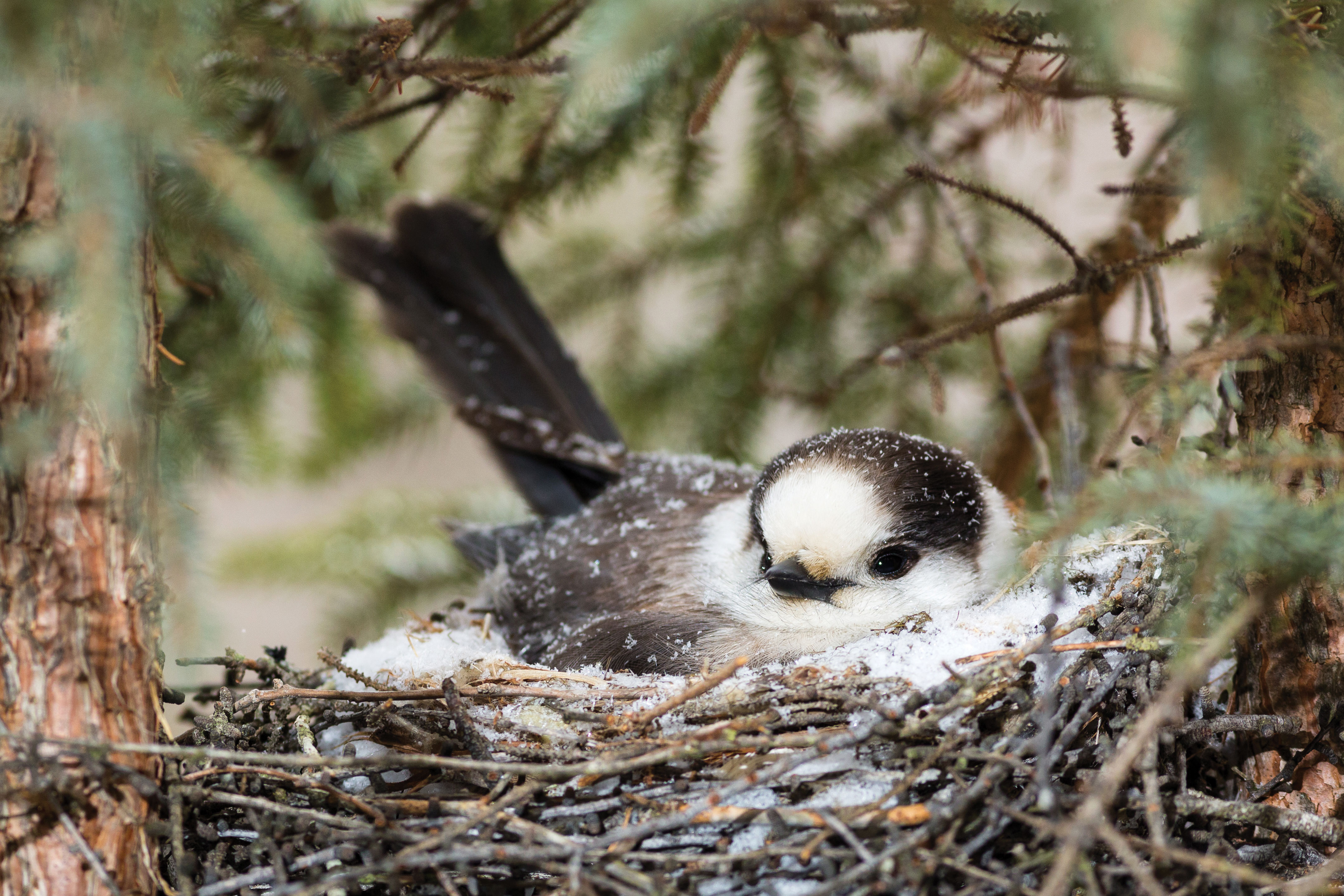 The Canada jay defies expectations. Its cute and often demure demeanour belies the fact that this bird has adapted its behaviour to survive — and breed — in the harsh winters of the boreal forests. “They sail through the winter even though there’s no obvious food around,” Strickland marvels. Not only that, but they fare surprisingly better in winter than summer, since the colder season means fewer predators. And as for those fluffy feathers, they puff up and serve as a full-body parka in frigid temperatures.

While many of the Canada jay’s multiple onomastic identities focus on its cunning nature and ability to socialize with people, none celebrate the bird’s ingenious food-storage technique that facilitates winter survival. Members of the fiercely intelligent corvid family, these jays are “scatter-hoarders,” but they’re the only ones to store their food high up in trees (to prevent losing it in the snow), squeezing their caches under bark or lichens. Even more spectacular, these omnivores don’t just store seeds like other jays — they cache an elaborate array of perishables, including berries, insects, mushrooms and even pieces of meat they’ve scavenged. They wrap each food morsel, amassed over the course of the summer and fall, in lavish amounts of sticky saliva, which they possess in abundance thanks to a biological superpower. That superpower? Extra-large salivary glands that stretch from the corner of the bird’s bill and almost meet inside the back of its head.

Once packaged, the food caches are tucked away in conifers where the tree’s resin slows down bacterial and fungal activity to prevent the perishable food items from decaying. This is where the birds’ enviable memory kicks in: they remember the precise location of most of their caches. And they’ve been known to hide up to a thousand caches in a single day!

We’re often told that birds maximize their chance of survival by breeding in the best possible conditions for genealogical success. So how would we explain the Canada jay’s choice to begin nest-building in February when temperatures in the boreal forest can hover around -30 C? Eggs are laid in March, then hatch in early April. There is often still snow on the ground when the young leave the nest in early May. It all may sound like madness, but it’s actually a highly enterprising strategy. Rearing their young before squirrels are as active and before migratory hawks arrive on the scene means there’s less chance their nests will be raided and, just as crucially, leaves the birds plenty of time to accumulate and store food for the upcoming winter. 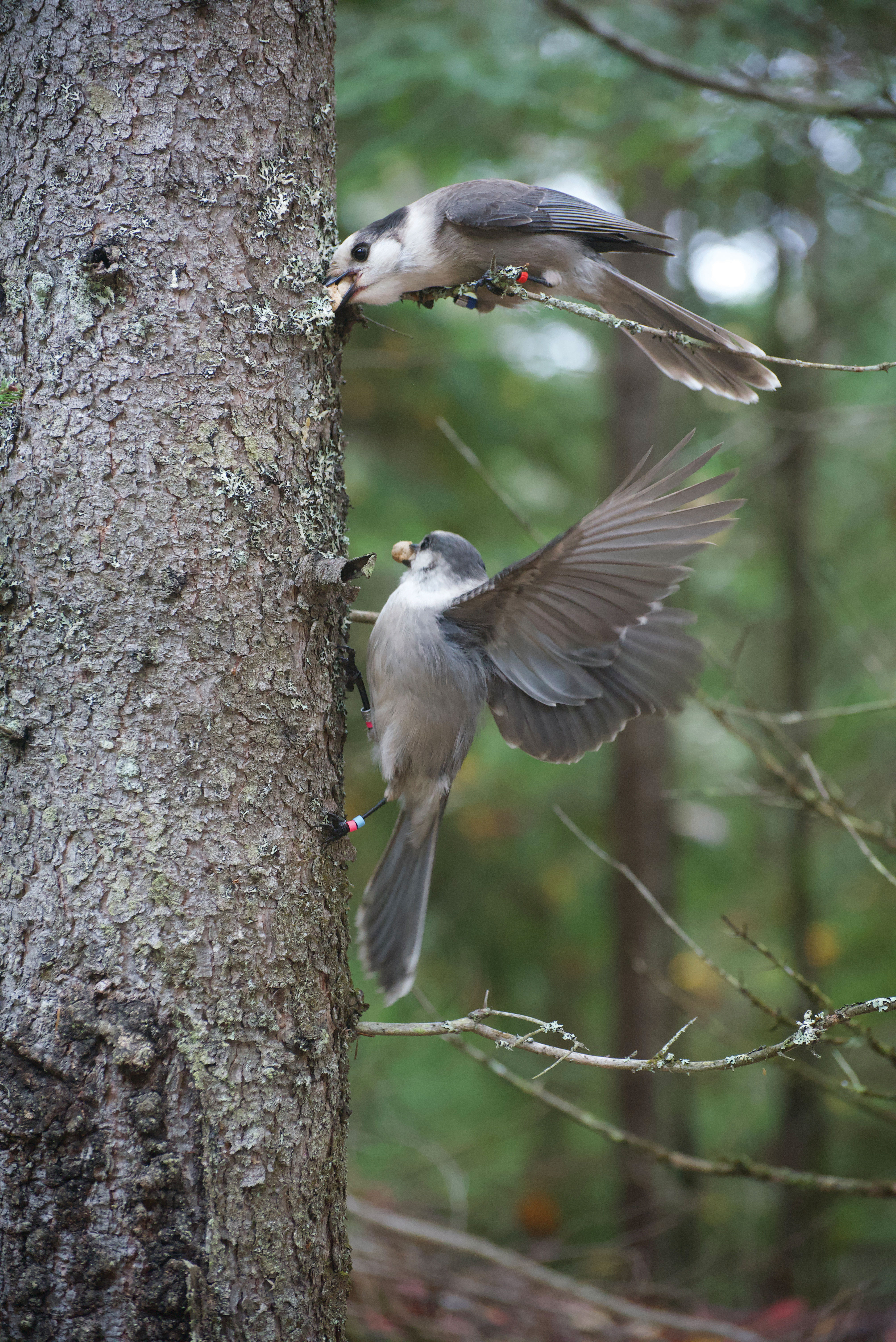 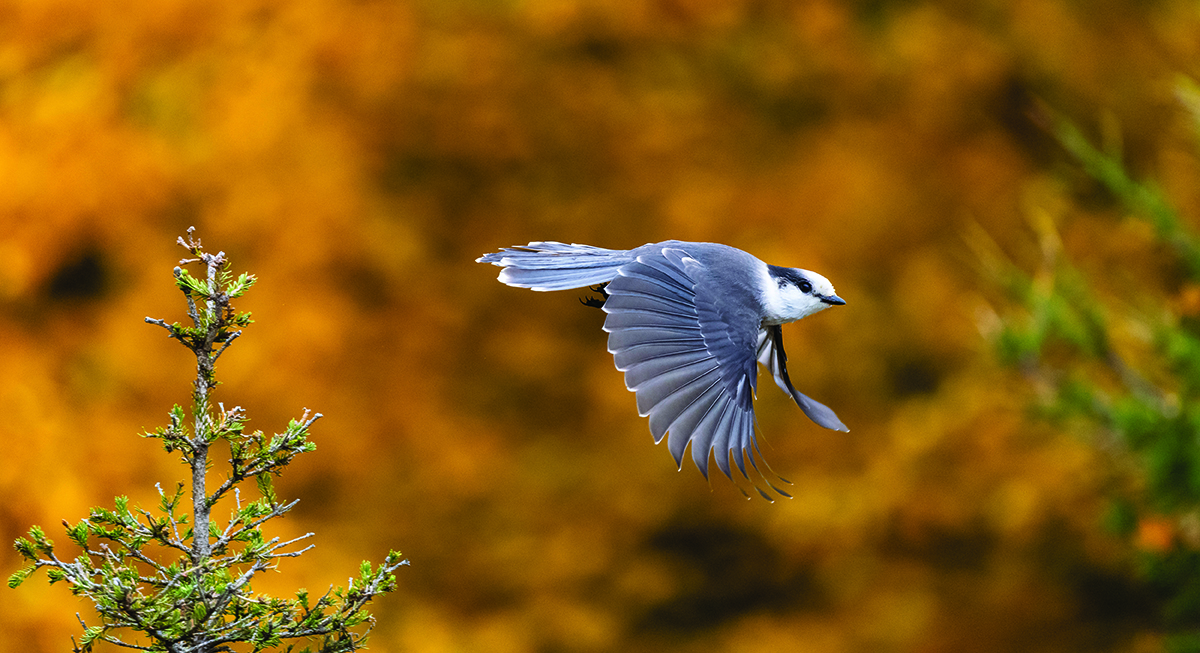 In summer and fall, a busy Canada jay will find and cache tens of thousands of food items to sustain it through winter. (Photo: Pchoui/iStock)

But nothing happens without its fair share of familial drama. Canada jays, which mate for life, produce two to five eggs each season, but only one of these nestlings will remain with the parents beyond their first spring. Intense rivalry ensues as soon as the chicks become independent and culminates in the dominant sibling kicking its brothers and sisters out of the parents’ territory. The displaced siblings must find a new territory, while the dominant sibling wins the right to remain with its parents for the coming winter. There has yet to be a family novel written about the Canada jay’s domestic intrigues, but I have no doubt it will be a great one.

"This fluffball of a bird is one of our hardiest, most intrepid species, and the official winner of the recommendation to become the National Bird of Canada."

Mischievous, inquisitive, fearless, it’s no wonder these birds have strong narrative potential. The Canada jay’s crafty nature and bold behaviour often invites comparisons with the Cree benevolent trickster and shapeshifter figure, Wisakedjak, although the names are etymologically distinct. Appearing in Anishinaabe stories, Gwiingwiishi discourages pettiness among people in favour of resilience, courage and empathy. In American folklore, in the guise of a “gorbey,” the bird has karmic properties — it is believed to be the soul of a deceased woodsman, and anybody who harms a gorbey will be subject to the same harm.

But though the feisty personality of the Canada jay can withstand many a thorny situation, it’s no match for climate warming, and the birds at the southern edge of their territory are in trouble. Warming temperatures and autumnal freeze-thaws are devastating news for the jays’ hoarding strategy, leading to the bacterial and fungal decay of their hidden food items. Strickland cautions that since the 1960s, the Canada jay population in Algonquin Provincial Park has decreased by two-thirds, with only one-third of their former territories occupied. “It’s a slow-motion train wreck,” says Strickland, “and the pipeline of young birds is drying up.” With fewer healthy young produced, the forecast for Canada jays in the park is dire: according to Strickland, there may be none left by the end of the century.

And yet they’re miraculous birds. A video of Koley Freeman, a PhD student at Ontario’s Guelph University, banding a young Canada jay chick shows the baby’s father swooping in without hesitation to feed his offspring while it’s in the researcher’s hand. “No other bird would do that,” says Strickland of their extreme tameness, “they live out their lives right in front of us.”

Slightly bigger than a robin, as fluffy as a kitten, fearless and daring, the Canada jay charms us — and compels us to do everything in our power to protect this uniquely Canadian bird. 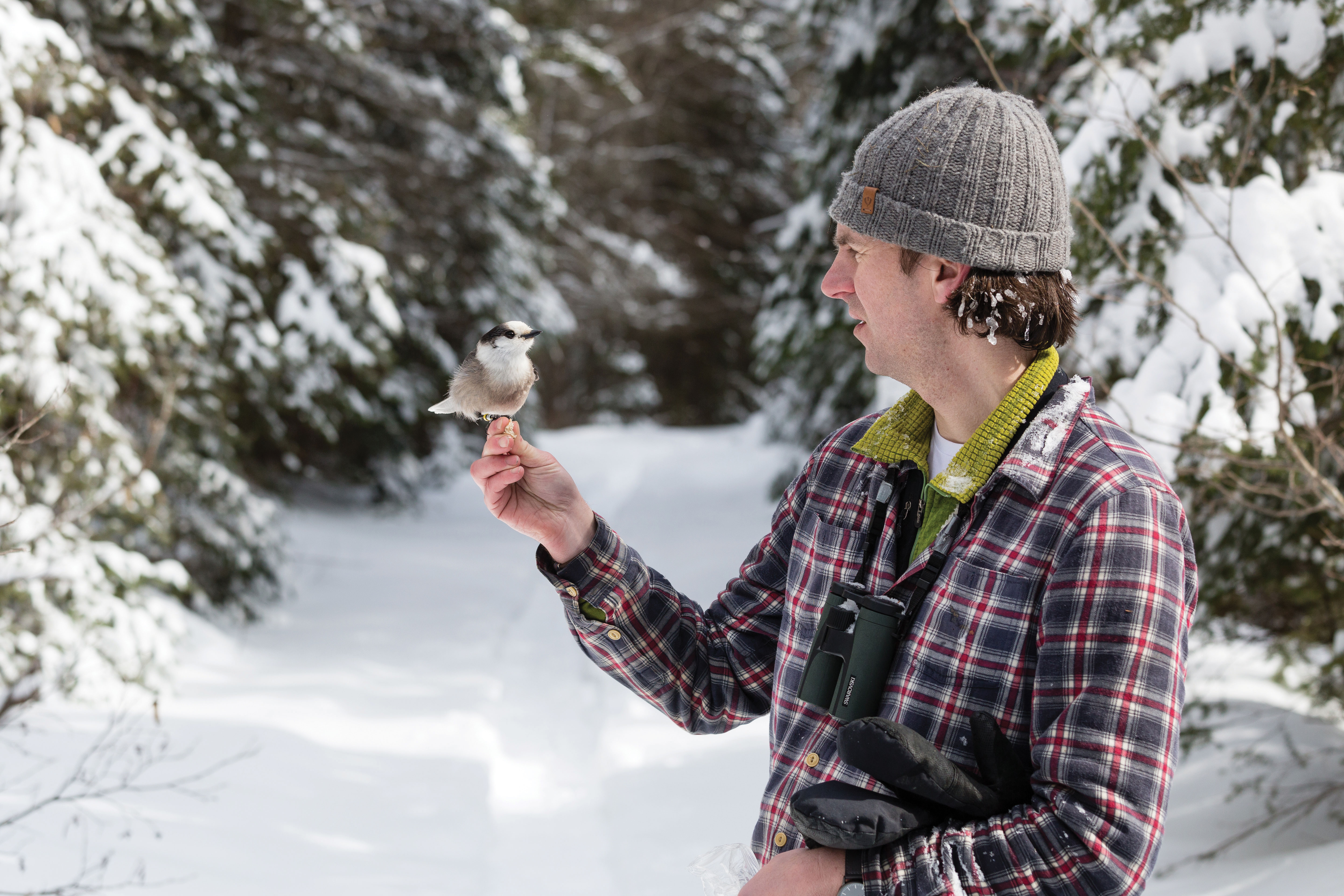 A Canada jay accepts a snack from researcher Ryan Norris. (Photo: Brett Forsyth Photography)
Read the chapter “The National Bird Project” by Canadian Geographic editor Aaron Kylie from the compilation The Canada Jay as the National Bird of Canada? here.