T’aalan Stl’ang: The beach that has everything
By Vanessa Fladmark
August 7, 2018
This spring, 40 Canadian youth aged 18-30 came together in Haida Gwaii for a 10-day expedition as part of Ocean Wise’s Ocean Bridge program. Ocean Bridge aims to empower young people to make an impact in ocean conservation by giving them the tools and confidence to lead educational and service projects in their own communities. Throughout the month of August, Canadian Geographic is featuring the voices of some of this year’s cohort as they reflect on their experiences in Haida Gwaii.

Skil Jaadaa hinuu dii ka’yaang, my name is Skil Jaadaa, and I’m from the Yahgu’laanas/Jaanas Raven Clan of Dadens, a village across from the site of K’yuusda in Haida Gwaii. I was ecstatic to learn I was one of 40 Canadian youth chosen for this program organized by Ocean Wise.

As an academic, living away from Haida Gwaii and studying shoreline cleanups, I felt that I was in need of reconnecting to my land and I wanted to help our shorelines that were impacted by debris from the 2011 Japan tsunami.

Our first day in Haida Gwaii, Danny Robertson of Marine Highlander Services gave an orientation before we boated out to K’yuusda and T’aalan Stl’ang for a remote cleanup and historic Haida village tour with Sandlanee Gid, Raven Ann Potschka. He prepared us for what we would find: large debris to leave behind and innumerable microplastics, broken up by harsh weather. Our cohort had read statistics on plastics, we thought we knew what to expect. But we were blindsided seeing the waves of debris that enveloped that special, beautiful place — a stark contrast after being so honoured and humbled by Raven Ann’s cultural tour of K’yuusda. 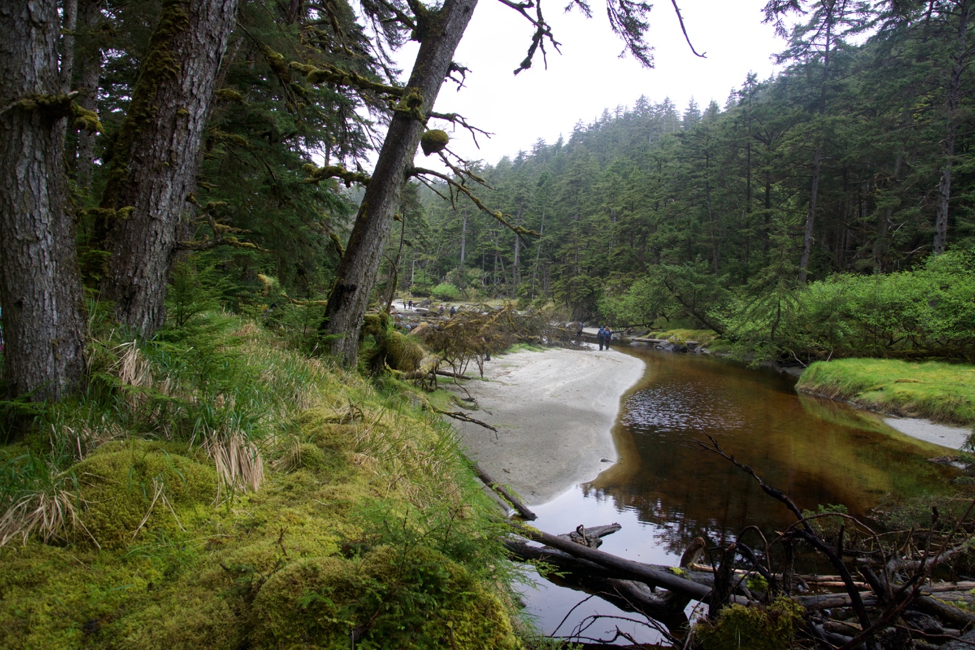 The end of the K’yuusda trail, where it opens up to the beach of T’aalan Stl’ang, or Lepas Bay. (Photo: Conner McDowell)

An excerpt from my Ocean Bridge journal for this cleanup describes the feeling: “As we walked through the forest from K’yuusda (where the trail opens up) to T’aalan Stl’ang (the beach that has everything), I held my white and black speckled agate against my heart, breathed the fresh air, listened to the birds, stepped over logs with ease, ate a piece of licorice root and felt so utterly and absolutely at peace. The first time in years, I felt deeply, truly home. T’aalan Stl’ang was the most dichotomous place I’ve ever experienced. It was so gorgeous with the wide open ocean waves crashing and the wildest protruding igneous rocks I’ve ever seen.

“Tidal pools galore, seemingly infinite mussels, barnacles, sea anemones and flowers sprouting amongst the rocks. Then the ugly reality of the reason we were there, the most numerous tiny and gigantic pieces of marine debris. Microplastics, bottles, tires and a concerning amount of rope and fishing nets. We cleaned about 100 kilograms and left big items to be picked up later.” 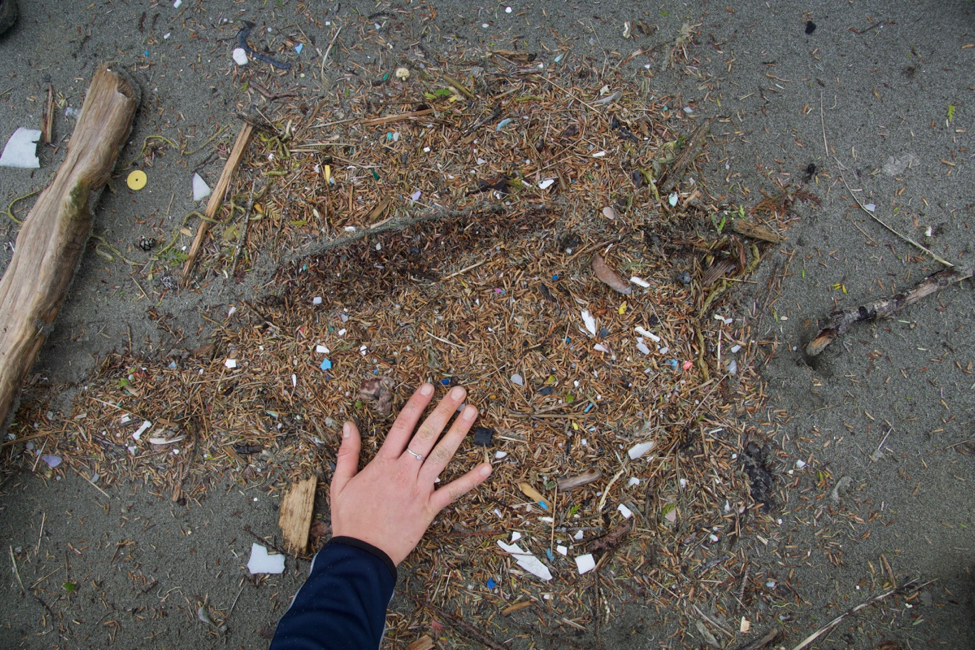 The hand of an Ocean Bridge participant provides scale to a pile of microplastics at T’aalan Stl’ang. (Photo: Conner McDowell)

This trip with Ocean Bridge was shocking, heartfelt and eye-opening. I learned from my study on shoreline cleanups that significantly more litter accumulates in remote, wave-exposed areas. However, the beaches where I grew up playing on Haida Gwaii, they were pristine in my memory. We would find the occasional sea glass or bottle, but never so interwoven with plastics.

The Haida community showed us how to dig for clams, trap crabs, explained the importance of fishing and taught us Yahguudang, to respect all things and know your place within the Earth. We saw that they were being impacted by plastic that wasn’t from them. T’aalan Stl’ang, the Haida Rediscovery camp site, is so remote that the community no longer has the resources to remove debris after the tsunami funding halted, although the waves of litter show no signs of slowing down.

This cultural and experiential learning was unforgettable to our group, who also organized a cleanup on North Beach with B.C. Parks, where we removed an additional 900 kilograms of debris. If there’s one thing the Haida Nation and the Ocean
Bridge experience have shown me it’s the strength in unity. When you interweave your values with others on ocean health and conservation, your individual voice becomes louder and we learned that through connections, we can change the world, one plastic item at a time. Haw’aa.

Vanessa Fladmark fell in love with the ocean from a very early age and dedicates her life to better understanding marine ecosystems through scientific research. She studied forage fish diets during her undergrad in Earth and Ocean Science at UBC, has been a research technician with the Pacific Salmon Foundation and is currently studying juvenile salmon diets for a Master of Science in Biological Oceanography at UBC.