Bridging the gap between conservation and culture
By Matthew Miller
August 17, 2018
This spring, 40 Canadian youth aged 18-30 came together in Haida Gwaii for a 10-day expedition as part of Ocean Wise’s Ocean Bridge program. Ocean Bridge aims to empower young people to make an impact in ocean conservation by giving them the tools and confidence to lead educational and service projects in their own communities. Throughout the month of August, Canadian Geographic is featuring the voices of some of this year’s cohort as they reflect on their experiences in Haida Gwaii.

During our remote wilderness expedition in beautiful Haida Gwaii, B.C., the 40 youth of the 2018 Ocean Bridge cohort came together as strangers, but left as friends. Originating from across Canada and representing a diverse group of individuals with different beliefs and backgrounds, we all shared some common ground: our love for the ocean and our passion to protect it. The purpose of the trip was to support the local community on ocean health and conservation related issues and projects, and to learn from locals about their culture and connection to the ocean.

The Haida people have deep roots in the archipelago, a rich culture, and a pride that shows with every story they tell or song they sing. Naturally, they have a strong connection to the ocean; their ancestors lived near the sea, harvested food and resources from it, and travelled across it in large canoes to trade, hunt, and explore. To this day, the Haida people rely on the ocean for their food and their economy. But environmental issues like climate change, ocean acidification, invasive species, and plastic pollution threaten their way of life and the natural state of the ocean ecosystems around them. The 40 of us divided up into teams to learn from the local community about how to tackle some of these problems. From this learning, we worked together to plan various projects and events for our trip.

As part of the marine debris cleanup team, I assisted in the planning and implementation of two remote beach cleanups. During these cleanups, we managed to collect more than 1,000 kilograms of garbage. As someone who has worked on ocean plastic research before, I consider myself very aware of the severity of the problem. However actually being out on these beaches, which act as natural catchment areas due to ocean currents and winds, and seeing the extreme amount of plastic debris that exists in what should otherwise be pristine areas, was really eye opening for me. It reinforced my passion for solving this problem and gave me the inspiration to increase my efforts. 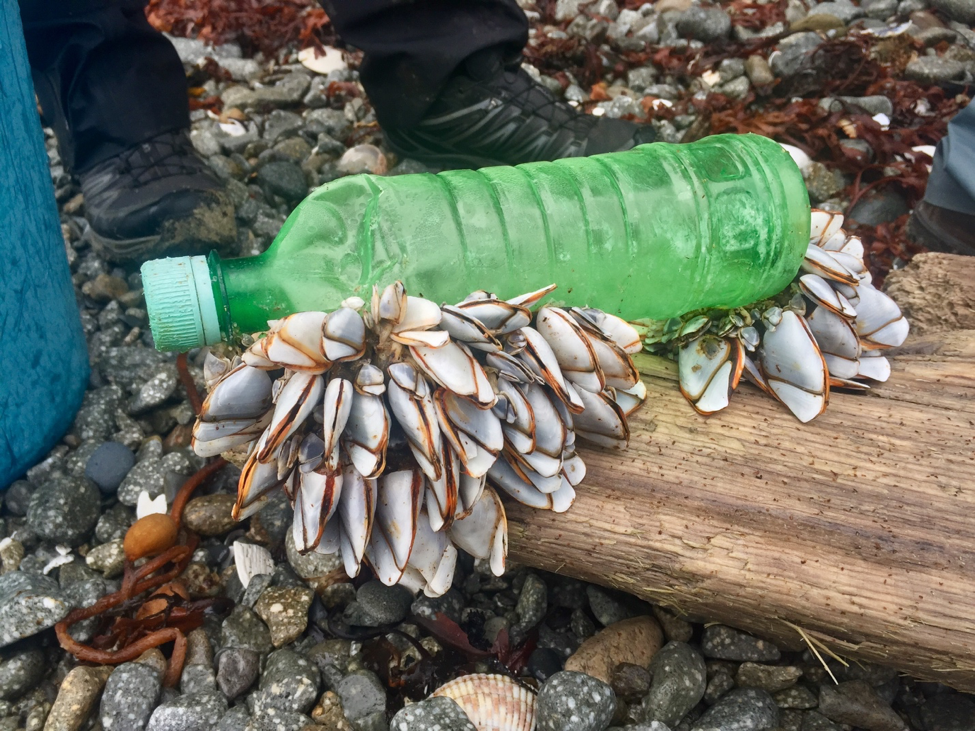 A colony of pelagic gooseneck barnacles attached to a plastic bottle, found washed ashore on K’yuusda beach near Lepas Bay. Ironically, the species name is Lepas anatifera. (Photo: Matthew Miller)
I was also part of the citizen science team, and for one of our projects, we collected data from one of the beach cleanups, documenting every single piece of debris collected. This was an extraordinary effort on everyone’s part. The data will be submitted to the Great Canadian Shoreline Cleanup for long-term monitoring. Another project we carried out was an invasive plant pull led by one of the park rangers. Known as ‘broom,’ this plant was introduced due to its nice-looking flowers, but it quickly spreads through coastal dune ecosystems and outcompetes native plants. We hunted around for broom in the treeline and pulled many plants. Activities like this one, as well as the beach cleanups, left many of us with a positive feeling. Having seen the tangible results of our efforts, we knew we had made a difference.

The experiences I had while on Haida Gwaii were profound. Walking through the ancient village sites in remote coastal rainforests, seeing the dugouts and corner posts of the long-houses that once housed hundreds of people, standing before a mortuary pole that a chief had been raised in after death, and hearing the stories from our guides whose ancestors had lived in the villages instilled a sense of humility, respect, a connectedness to nature, and even a spirituality in me. I have always been fascinated by ancient technology and innovation, so I was particularly interested to learn about things like how they carved such large and intricate canoes and poles, how they made fishing line, nets, and hooks, how they sustainably harvested bark from cedar trees in a way that allowed the tree to survive, and how they used certain plants for medicine. Like other First Nations in BC, the Haida people didn’t have written language until very recently, so all their knowledge was passed down through the generations by storytelling. If you ever have the privilege to listen to a Haida person tell a story, you will know why this worked. They are such great storytellers, using a unique non-linear technique that allows them to flow between different stories without losing direction.

Another memorable experience was when Chief Donald “Duffy” Edgards showed us how to successfully dig for razor clams, and then how to clean, cook, and eat them. This was an exciting and triumphant time for me, since I have tried a few times in the past to catch a razor clam, and have always failed (they are the fastest digging clams in the world!). 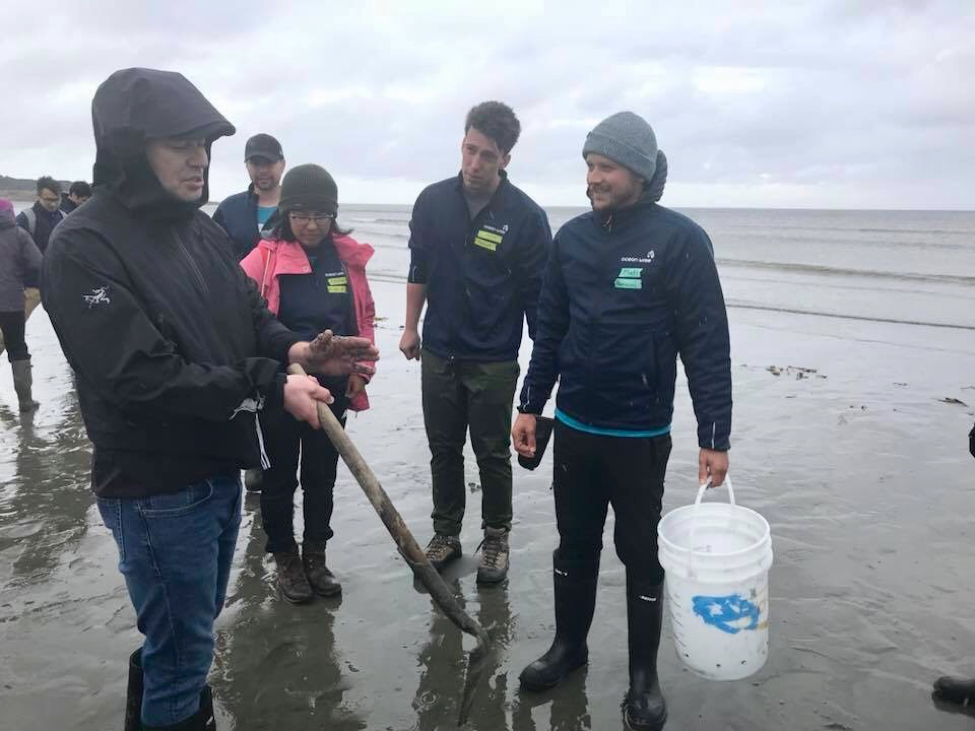 One lesson I think we all learned was that Haida Gwaii can be unforgiving, as we discovered when our plans to visit Gwaii Haanas were cancelled due to gale-force winds. Other experiences such as flash hail and rain storms during our invasive plant pull humbled us to the nature of this wilderness. But we learned that when plans fail,  instead of dwelling on what might have been, you adapt, make new plans, and forge on with positive spirits. In a place as powerful and spiritual as Haida Gwaii, you can’t help but feel that everything happens for a reason.

I’m sure I can speak for all of us when I say that our time and experiences in Haida Gwaii were very special, and will stay with us forever. I feel extremely privileged to have had this opportunity, to have met all the locals and fellow Ocean Bridge members, and to have learned from them and shared these experiences with them.

Haw’aa Haida Gwaii, we will see you again.

After discovering his interest in sustainable development, the environment and climate change, Matt Miller completed a Bachelor of Science specializing in fisheries and aquaculture and a Masters of Science in Ocean Science. He is actively educating local residents in his community of Victoria, B.C. about the need to protect our oceans through his local Surfriders chapter and teaming up with groups such as Let's Talk Science to reach out to elementary school children about the global plastic crisis.​