Tales of exploratory derring-do in Canada’s North have long captured the public’s attention, whether it’s firsthand accounts such as John Rae’s Narrative of an expedition to the shores of the Arctic sea in 1846 and 1847 or spellbinding narratives such as Ken McGoogan’s forthcoming Dead Reckoning: The Untold Story of the Northwest Passage and Hampton Sides’ In The Kingdom of Ice.

Equally compelling, however, is the host of artwork inspired by the voyages these and many other writers have recounted. As part of the North theme in its March/April issue (on newsstands March 20), Canadian Geographic, with the help of Library and Archives Canada, has gathered nine notable works that help show the history of Arctic exploration. 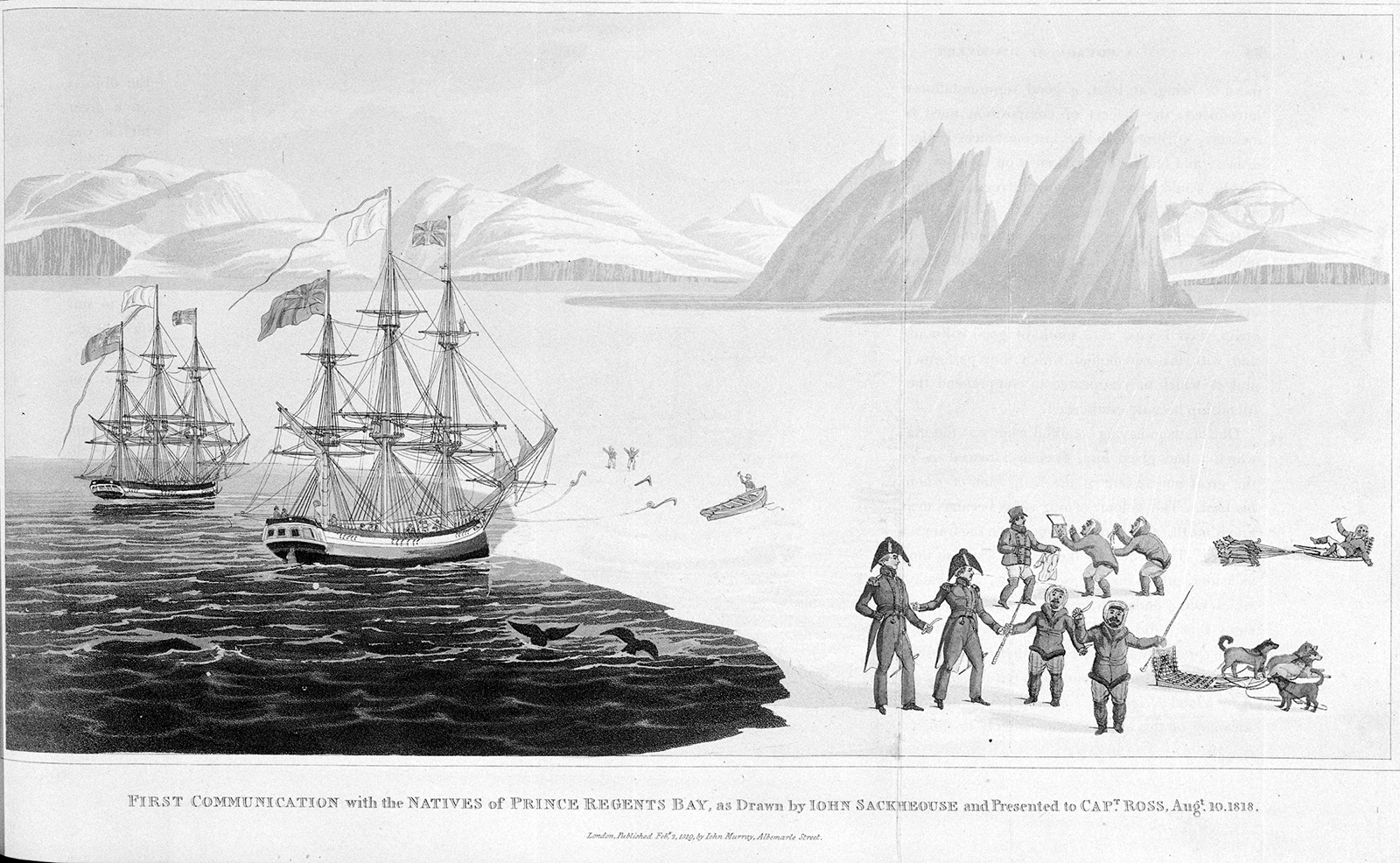 During their 1818 expedition, John Ross and his crew encountered Inuit on the coast of northwest Greenland. This image, drawn by John Sacheuse, an English-speaking Greenland Inuk who acted as the expedition’s interpreter, depicts that meeting, with Ross and William Parry showing the Inuit knives and mirrors. A full-colour version can be seen here. 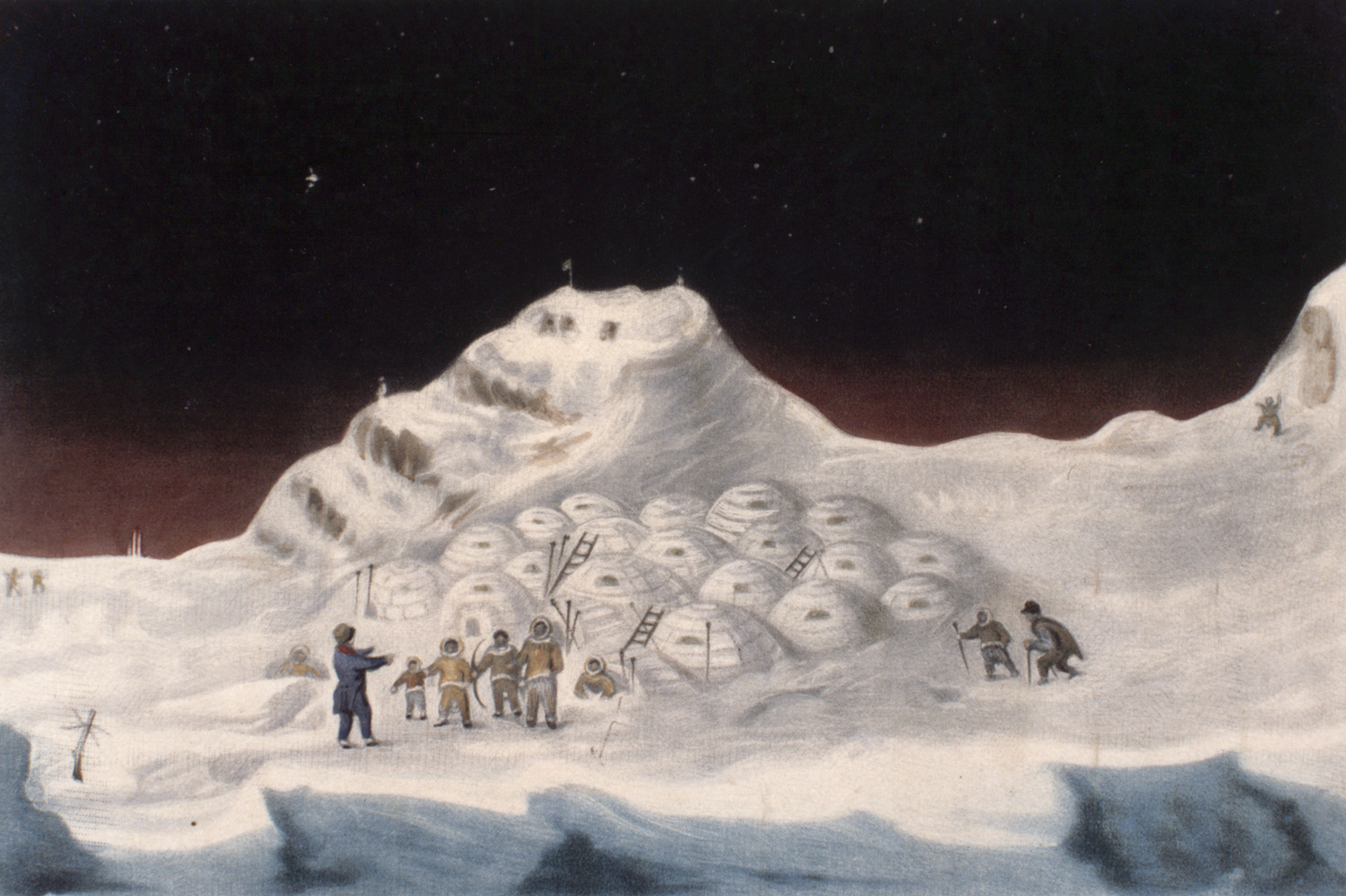 Ross returned to the Arctic in 1829, but it would be another four years before he made it back to England. His ship, the steamer Victory, became trapped in the ice of the Boothia Peninsula for four winters, giving Ross and his crew plenty of time for encounters with the local Inuit, as depicted in this engraving based on a sketch Ross did. 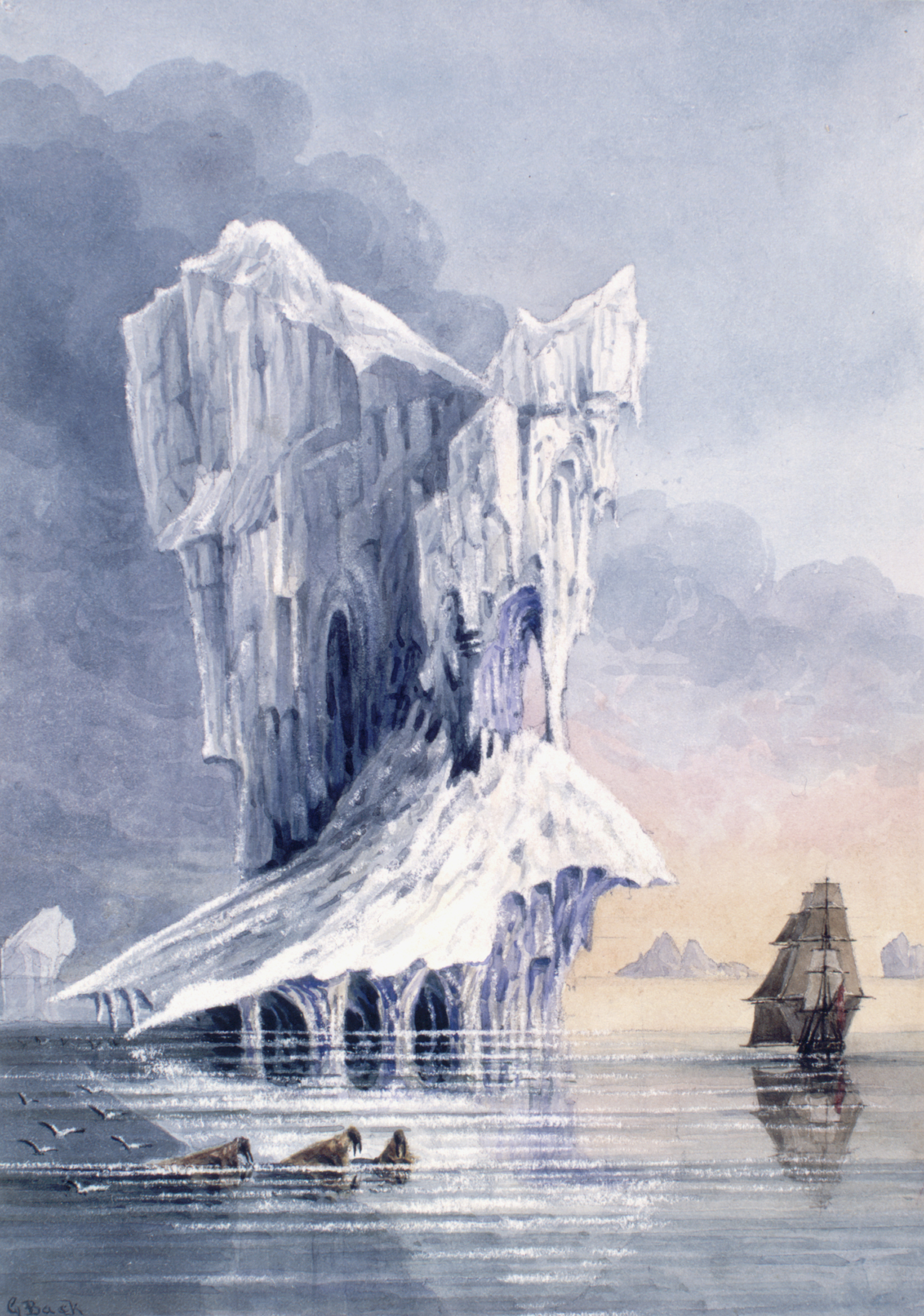 George Back’s 1836 voyage to the Arctic was a near-disastrous failure. He and his crew spent 10 months imprisoned in pack ice aboard HMS Terror before barely making it back across the Atlantic. Back painted this watercolour of Terror shown a month before the ship became icebound. 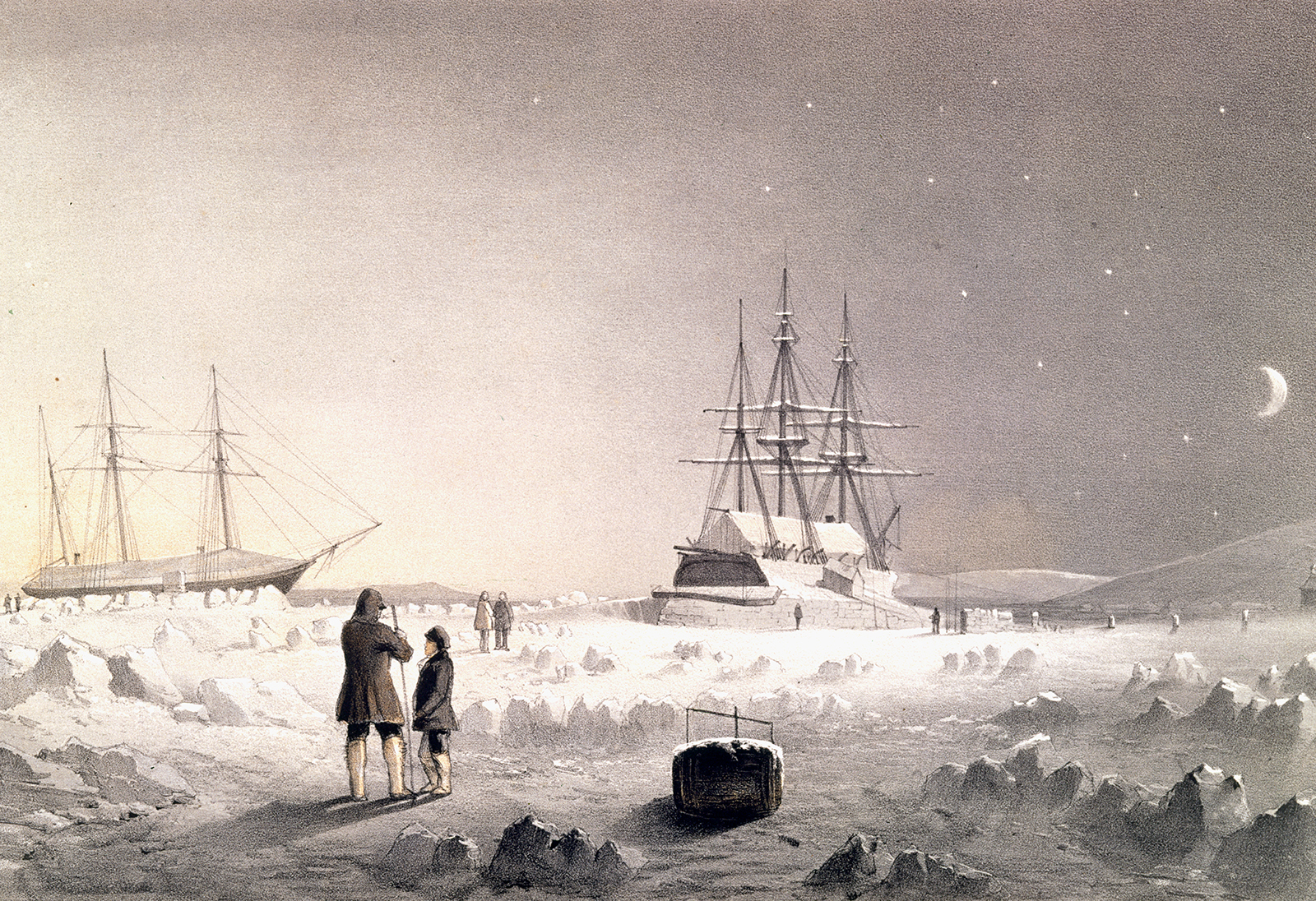 In 1852, Edward Belcher took five ships to search for John Franklin, whose own two ships, HMS Terror and HMS Erebus, hadn’t been seen by Europeans since 1845. Like so many vessels that came before and after his, Belcher’s ships became stuck fast in the ice. This print shows two of them, HMS Assistance and the Pioneer, which along with two of Belcher’s other ships were eventually abandoned to the ice. 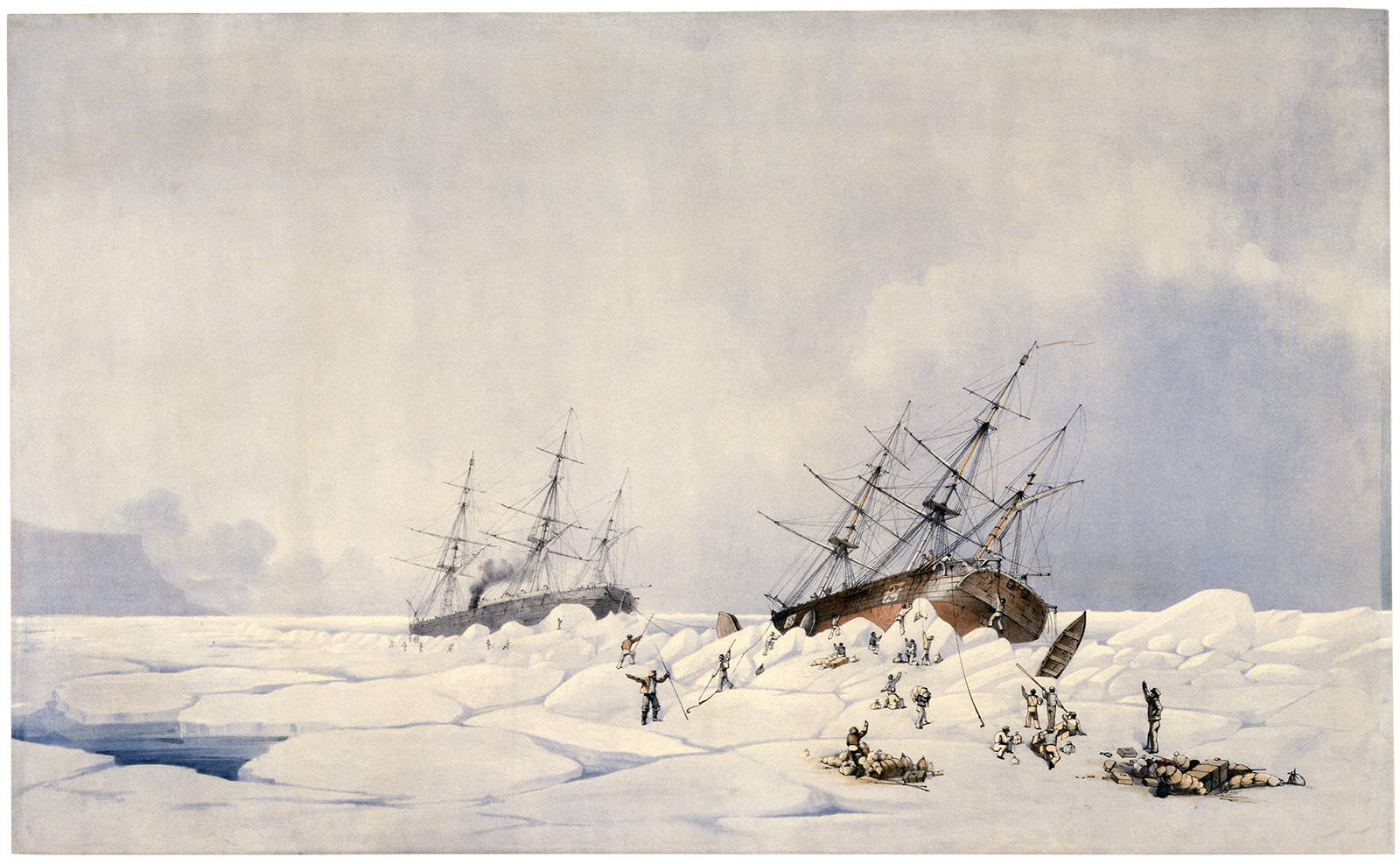 No. IV HMS Phoenix and the Breadalbane at the moment when the latter was crushed and sunk. The field of ice, easing off from the Phoenix passed astern to the Breadalbane, and entering her bow, she filled and sank in less than 15 minutes, in 30 fathoms of water, ca 1855. (Image: Edward Augustus Inglefield Collection/Library and Archives Canada, accession number 1989-399, c000227k)

Many of the vessels involved in attempting to discover Franklin’s fate became legendary in their own right. One of these was the Breadalbane, which along with the HMS Phoenix sailed into the Arctic in 1853, as this image shows, to resupply Edward Belcher (see above). The pack ice tore a hole in the Breadalbane, which quickly sank. The location of the wreck remained a mystery until 1980, when it was discovered by Joe MacInnis. Today, it’s the northernmost known shipwreck in the world. 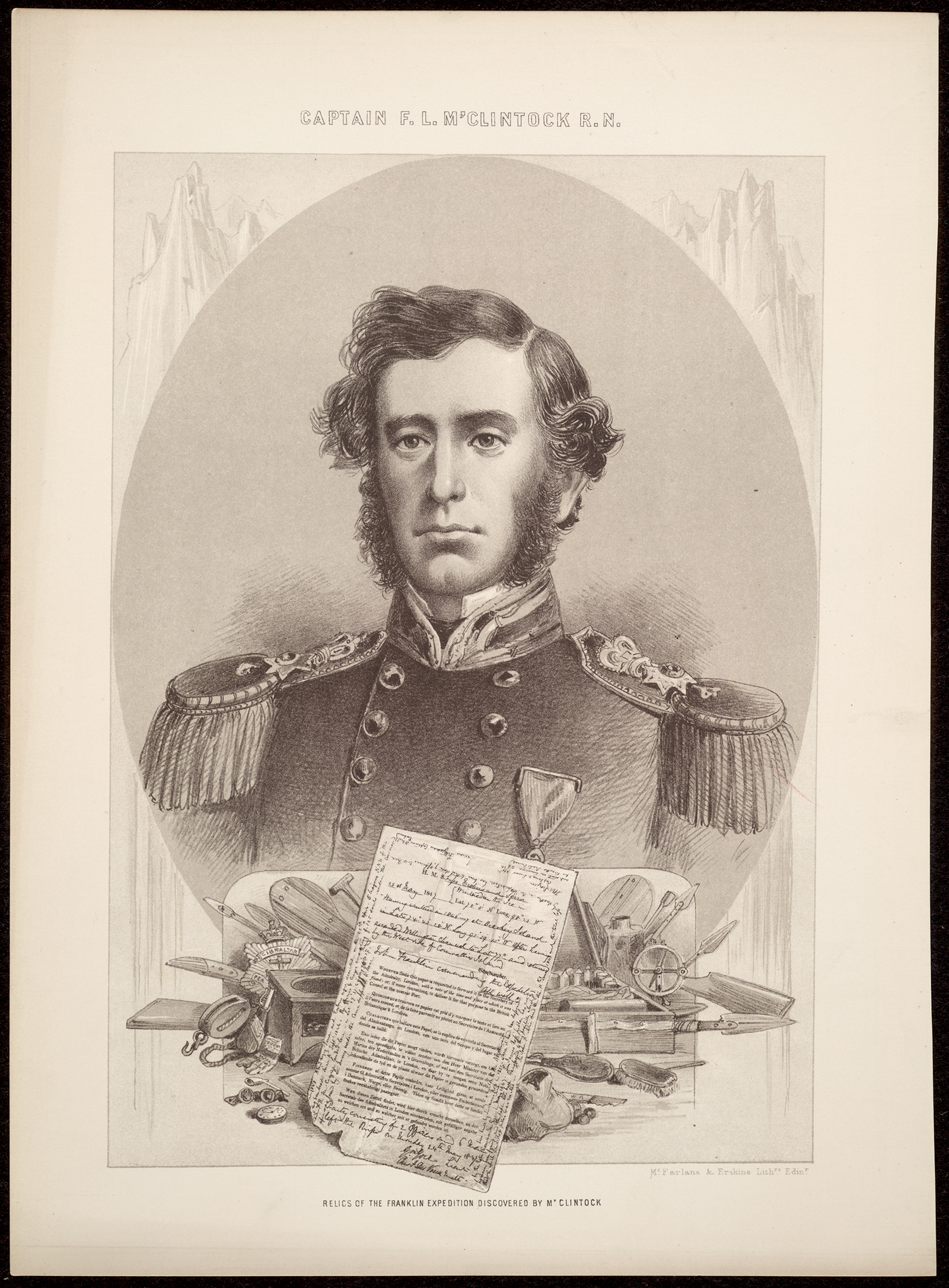 Of the many expeditions that set out to find Franklin, Francis McClintock’s 1857-59 journey is perhaps the most famous. It was during this voyage that McClintock and his crew discovered a cairn containing what’s now known as the Victory Point letter — a document left there by some of Franklin’s crew that explained part of what had befallen the expedition. This image shows McClintock, along with the Victory Point letter and various Franklin relics McClintock’s men recovered. 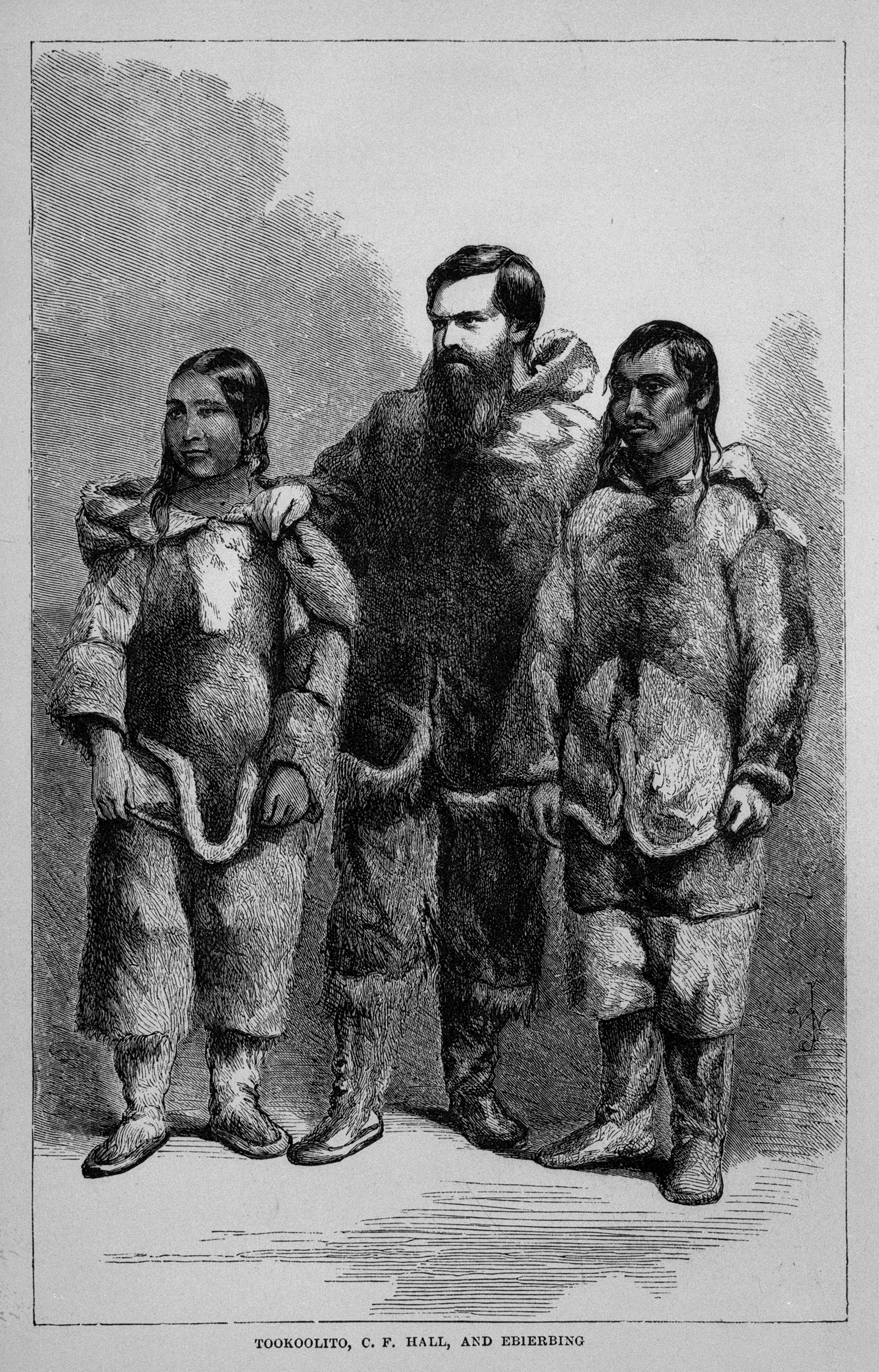 In 1860, Charles Francis Hall, an American from Cincinnati, travelled to the Arctic, determined to find survivors of the Franklin expedition that had disappeared 15 years ago. That didn’t happen, of course, but Hall did prove that Frobisher Strait was actually a bay and also found traces of Martin Frobisher’s presence, 282 years after the Englishman had attempted to mine gold in the region. During his journey Hall relied on Ebierbing and Tookolito, two Inuit guides who spoke English. The trio is pictured in the engraving shown here. 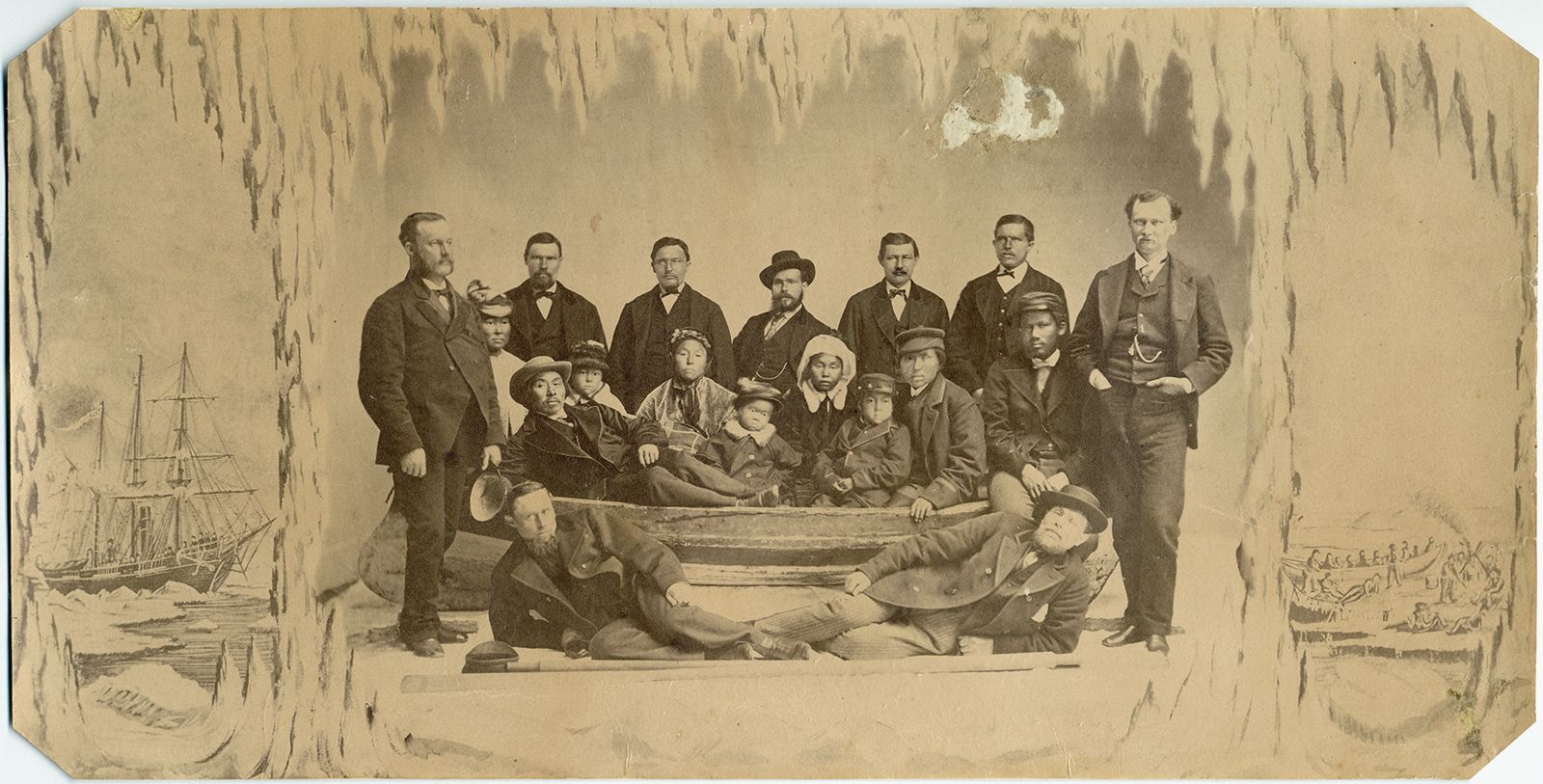 Hall was also involved in the disastrous 1871 attempt of the Polaris expedition to reach the North Pole. About four months after the ship set sail, Hall died in mysterious circumstances. In 1872, as Polaris attempted to sail south from northwest Greenland, 19 people became separated from the ship and spent the next six months drifting about 2,000 kilometres on an ice floe before a sealing ship plucked them from the water off the coast of Labrador. This photograph of the survivors was taken in St. John’s, shortly after their rescue. 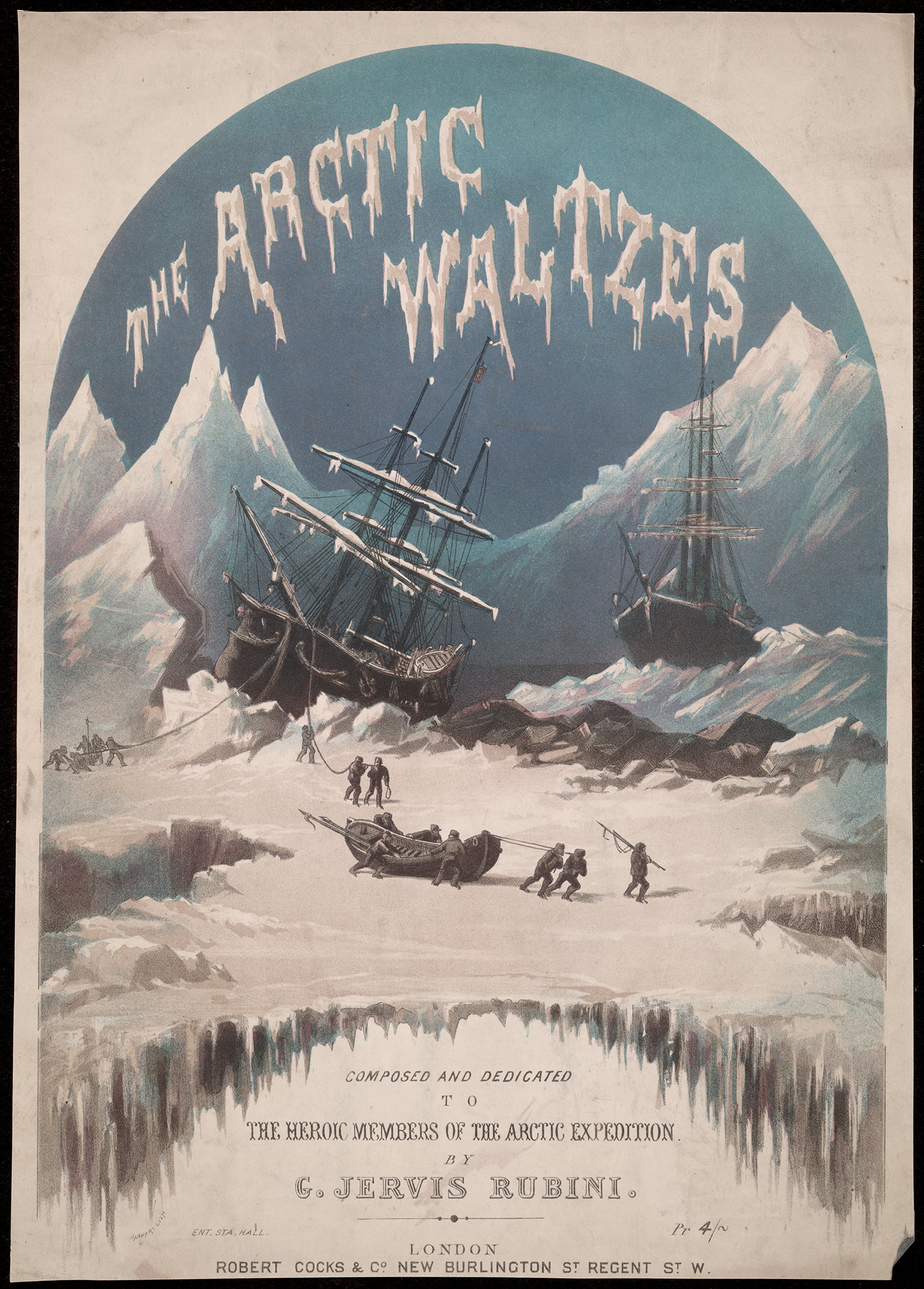 The appetite for all things related to Arctic exploration extended beyond mere books, newspapers and magazines to include musical tributes such as G. Jervis Rubini’s The Arctic Waltzes, which was “composed and dedicated to the heroic members” of the British Arctic Expedition of 1875-76. The cover of the work’s sheet music — complete with towering peaks, jagged pack ice and men hauling sledges —  may well have been designed to capitalize on the public (and certainly not altogether untrue) perception of the Arctic as an alluring yet harsh mistress.