Niagara Falls is actually a marvel of engineering

A book by environmental historian Daniel Macfarlane reveals the decades of technological feats and cross-border politics that went into “fixing” one of North America’s most important natural sites
By Can Geo Staff
August 21, 2021

If you’ve ever stood at Table Rock on the Canadian side of Niagara Falls, watching the water thunder past and feeling the mist on your face, you might have been tempted to imagine what this natural wonder must have looked like hundreds of years ago, before the casinos, hotels and haunted houses moved in. The truth? Pretty different.

Since the late 19th century, the falls have been heavily engineered to generate energy behind a flowing façade designed to appeal to the estimated 13 million tourists who visit each year. Essentially, this natural wonder is now a tap: huge tunnels channel the waters of the Niagara River around the falls, which ebb and flow according to the tourism calendar.

A recent book by environmental historian Daniel Macfarlane reveals the technological feats and cross-border politics that facilitated the transformation of one of the most important natural sites in North America.

Read an excerpt below from Fixing Niagara Falls: Environment, Energy, and Engineers at the World’s Most Famous Waterfall.

Before the Second World War, engineers had envisioned a series of submerged weirs as well as various configurations of control dams. But the models now indicated that these would not be flexible enough to meet the treaty’s flow parameters. A control structure with gates, what some might term a dam, which could maintain the pool level for power diversions while also distributing the flow to the cataracts in a satisfactory way, emerged as the backbone of a new water control regime, along with fills and excavations to reconfigure the riverbed and lip of the cataract. The 1949 Federal Power Commission report on Niagara development had placed this control structure near the outlet of Lake Erie at Buffalo, some eighteen miles upstream. But engineers now believed that the optimal location was right above the Falls. In addition to a control structure, the remedial works would include reclaiming the flanks of the Falls so that no unsightly trickles would be obvious and a greater volume of water could be channelled to the shortened crest of the Falls. These fringes would be reclaimed and landscaped to serve as viewing areas.

This speaks to the hybridity inherent in the design. Organic elements were accommodated and factored into their mechanical creation, incorporated as part of the dynamic infrastructure: i.e., the new envirotechnical system engineers were creating would not work properly without normal weed growth and ice formation. Designing remedial works and power station intakes to withstand or deal with ice, particularly frazil ice, was a paramount concern. Formative studies of the impact of ice formation had been done in the Niagara River over the previous century, and many of the engineers from Ontario Hydro and the US Army Corps of Engineers were on the leading edge of ice studies. There was still “a dearth of factual data” about ice, however.

Whereas a “controlling criterion” in the studies underpinning the 1929 Niagara Convention and Protocol was a satisfactory depth of water in the high-flow section of the Horseshoe Falls in order to create a satisfactory colour effect, now complete coverage of the flanks was equally important. But what was the acceptable minimum depth and distribution? Several aspects had changed, after all, since 1929: there was the submerged weir, and additional diversions had been authorized in the 1940s. The engineers “agreed that an attempt would be made to establish a scenically satisfactory flow per foot over the flanks in advance of the tests in order to present a target at which the tests would aim.” 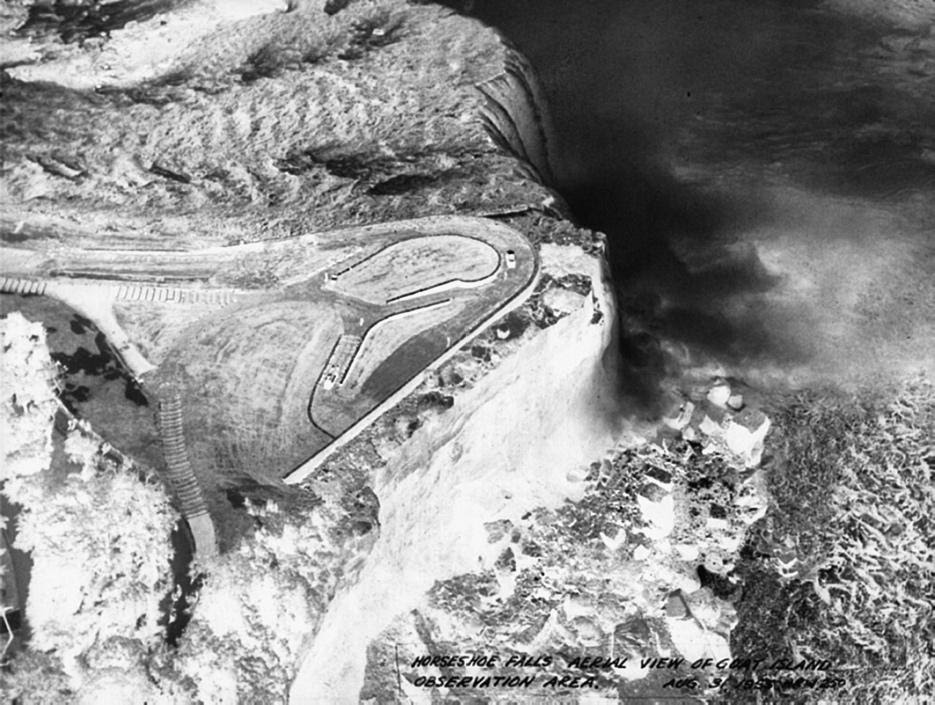 Figure 5.8 Creation of Terrapin Point on the US flank of the Horseshoe Falls. (​Photo: Ontario Power Generation)

On the model, engineers simulated dikes and barrages in the cascades above the horseshoe to deflect water to the edges – eleven different model designs in all – and then they tried with fills and excavations. The latter were ultimately recommended since they were more aesthetically pleasing, no more expensive, and less susceptible to ice damage. But the precise placement and size of fills and cuts needed further tests: for example, lesser amounts of excavation at the flanks could produce an unbroken crestline on the model with the river flow at 100,000 cfs, but not at 50,000 cfs. 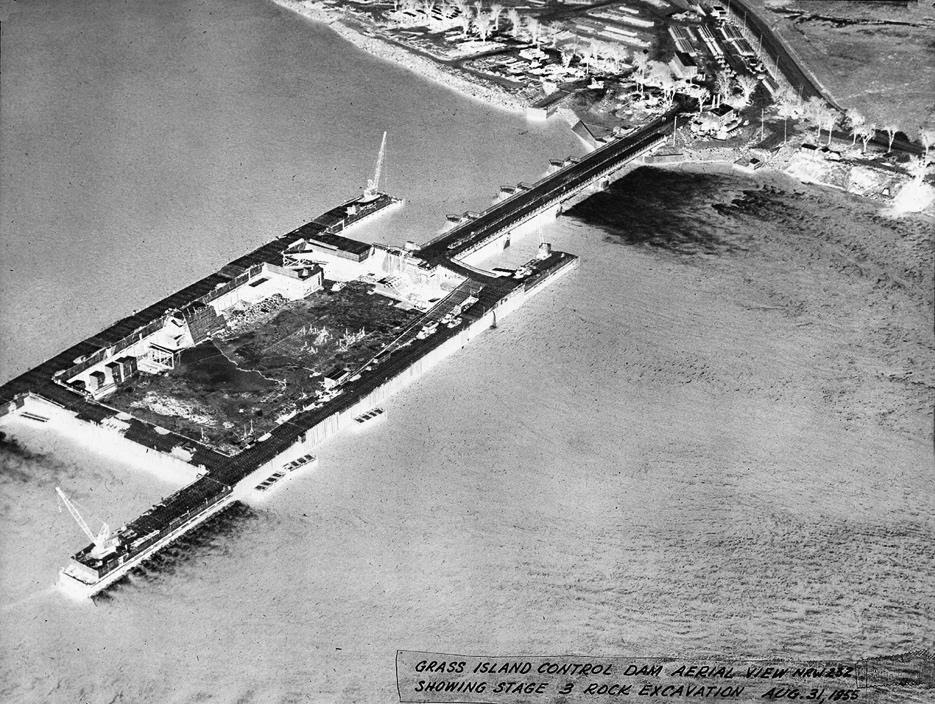 While a control structure had emerged as the preferred method in place of weirs, what should its dimensions and features be? The engineers went to the model to test the different options: A dam across the entire river, or only part of it? Or another dam at the head of the river by Buffalo? Should a control dam have sluices or movable gates so that water flows to certain sides of the river could be better controlled, and to deal with ice? The models were used to progressively eliminate the less suitable solutions. The control structure would be most useful on the Canadian side of the river, since the riverbed slanted in that direction. The proposal for a short dam from the American shore to join a longer structure from the Canadian shore, with a gap in between, was rejected because the costs would be out of proportion to the resulting benefits.  Settling on a control dam extending from the western shore, experiments indicated that it needed to be a minimum of 1,550 feet long and feature thirteen gates/sluices. 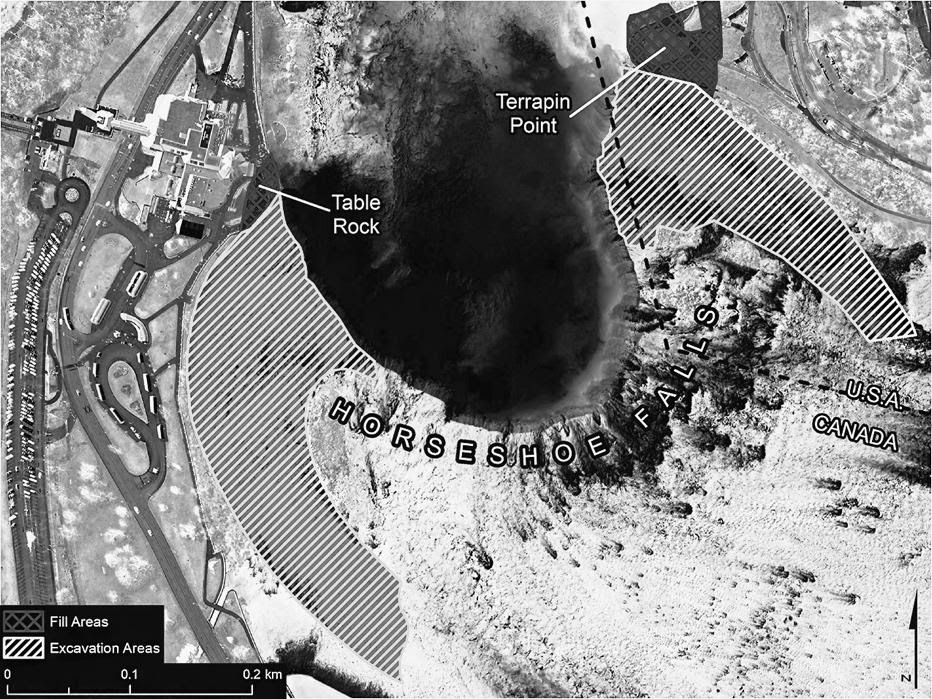 The 1950 Niagara Diversion Treaty authorized this altered water regime, as well as the remedial works that would compensate for this loss of flow. The remedial works were designed to produce continuity along the rim, an uninterrupted “curtain of water” with a sufficient “impression of volume” and an appropriate shade of water colour. They were also intended to reduce spray and mist, which the parks commissioners were sure discouraged visitors. The official history of Canadian Niagara Parks claims that the spray problems were reduced, at least at the scenic tunnels. While it was debatable whether the mist and spray had actually dissipated near the Falls, and whether erosion had really been curtailed to the extent claimed, the waterfall was taller and cloaked by a liquid veil. Parts of both reclaimed flanks of the Horseshoe Falls were landscaped, walled or railed, and turned into prime vantage points. The public flocked to these viewing stations. This all spoke to the commodification of the Niagara experience: nature was simplified and ordered, sanitized and tamed, and packaged for convenient consumption. 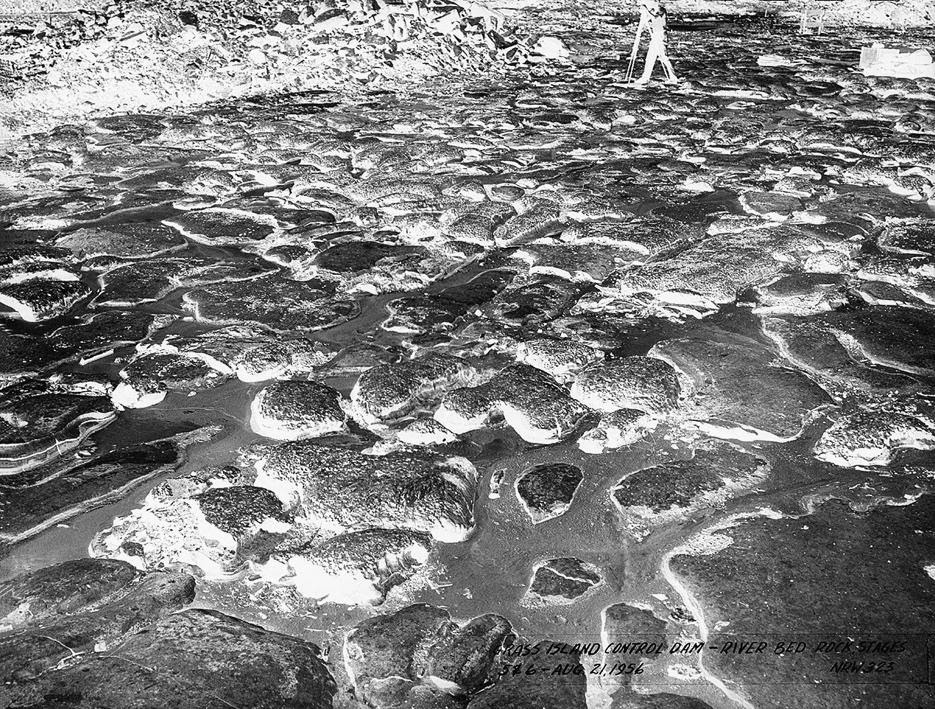 Niagara Falls still involved a huge volume of plummeting water. Granted, it could now be turned on and off – or at least up and down – like a tap, or like workers punching in and out of their shifts. Time itself was further reconfigured with the creation of the pumped-storage plants that hoarded the water according to the needs of the generating stations, rather than nature’s clock. The manipulation of Niagara Falls raises interesting questions about the supposed divide between natural and artificial, between human and non-human.

Excerpted with permission from Fixing Niagara Falls: Environment, Energy, and Engineers at the World’s Most Famous Waterfall by Daniel Macfarlane, 2020, UBC Press, Vancouver and Toronto, Canada. For more information go to www.ubcpress.ca.