When the cod fishery collapsed, fisherman Eugene Maloney’s livelihood is yanked out from underneath him. All his pride, all his life, everything he’s ever known is suddenly gone. Gene doesn’t recall spending days and weeks on land, certainly not in summertime. But here he is with fishing gear that’s no longer of any use. In the spring of 1992, when the Canadian government shuttered the cod fishery, Gene had fished his last cod, marking an abrupt end to a five-generations-old way-of-life for the Maloney family. But every bit the enterprising Newfoundlander, Gene turns the end of the fishery into a new beginning. He pivots to boatbuilding, a self-taught practice he continues today, in his eighties. Set in Bay Bulls, Newfoundland and Labrador, Last Fish, First Boat revisits the 1992 cod moratorium through a fisherman’s eyes. It’s an old story that holds new meaning in 2020, as a global pandemic put Canadians from coast-to-coast-to-coast out of work, stuck at home and needing to pivot. Like Gene’s story, where there’s will, Canadians will find their way.

Last Fish, First Boat is a six-minute animated film, adapted from the 2019 book, Cod Collapse: The Rise and Fall of Newfoundland’s Saltwater Cowboys, by journalist and Fellow of The Royal Canadian Geographical Society, Jenn Thornhill Verma, with still-frame animation by visual artist, Kat Frick Miller. Filmmaker Matt LeMay co-produced the film with Verma and Miller. Indie electro-rock duo, Paragon Cause, produced original music for the film. Funding for the film was provided by the Canada Council for the Arts.

Canadian Geographic is hosting the film for the public, while McIntrye Media is handling distribution to schools, libraries and other institutions interested in using the film (and its compendium curriculum for learners of all ages) for educational and instructional purposes.

Why is the cod collapse relevant today?

Atlantic cod, the species, is better known as Northern cod, the population, to most Newfoundlanders and Labradorians. In the thirty-year period pre-dating the moratorium (between 1962-1992), cod in Canada are estimated to have declined by greater than 90 per cent, reports Dalhousie University fisheries biologist, Dr. Jeffrey Hutchings. That’s two million tonnes of cod, which for the sake of understanding says Hutchings, is the equivalent of about 26.7 million humans (based on an average adult body weight of 165 lbs).

The moratorium on cod was meant to last two years, but thirty years later remains in effect. There is a commercial cod fishery, however; In 2006, the Department of Fisheries and Oceans (DFO) Canada reopened the so-called “stewardship fishery.” While research within the last five years showed the cod population may be bouncing back, more up-to-date assessments show a cod comeback remains hampered mostly due to flailing capelin populations (spelled caplin in Newfoundland and Labrador), cod’s primary prey; and due to warming ocean waters as a result of the global climate crisis. The latest research also shows overfishing attributed an even greater role in the cod collapse than originally thought. In December 2020, DFO released the first-ever Rebuilding Plan for Atlantic Cod. The plan is an important step for bringing this formidable species back from the brink, but doesn’t go far enough to address the known issues at play.

The cod moratorium was the largest mass layoff in Canada’s history. Unemployment rates reached a high in Newfoundland and Labrador in 1992 of 20 per cent, the greatest in the country, where unemployment was, on average, two-fold lower at 11.2 per cent. Today, as the coronavirus (COVID-19) pandemic put millions of Canadians out of work and forced everyone to stay at home, Gene’s story and the cod moratorium is more relatable than ever before.

The national unemployment rate more than doubled from 5.6 per cent in February 2020 to 12.3 per cent by June 2020. The unemployment rate today remains high, at 9.4 per cent in January 2021. The country’s highest unemployment rates are in Newfoundland and Labrador (12.6) and Alberta (11.1), largely due to oil and gas industry downturn and job losses, which many have related to the days of the cod moratorium.

Last Fish, First Boat is a story about reinvention at a time when the world is crashing down around you. Fisherman Gene Maloney is anyone facing a personal or professional identity crisis and Bay Bulls, Newfoundland and Labrador is every community forced to renegotiate its own existence when the status quo is no longer tenable.

The film offers a light-hearted perspective too. The summer after the groundfish fishery closure, with boredom setting in, everything on land got a lot more attention as houses and gardens were spruced up. The painted fences of 1993 could be today’s home improvement projects. With Canadians then and now landlocked and housebound, many turned their attention to refurbishments at the homestead. Of course, not everyone has the luxury of a fenced-in yard or roof over their head. When events of this nature happen, everyone is displaced, but some are more vulnerable than others. How we respond as a community is especially revealing.

Yet another parallel between the moratorium and today’s pandemic is that neither were an act of God. Both could have been prevented. Preventing future threats requires learning from our past.

The making of Last Fish, First Boat entailed creating more than a dozen new works of art by Kat Frick Miller. Miller relied on reference photos taken by Jenn Thornhill Verma in the summer of 2018 when she researched her book, Cod Collapse. Miller then created still-frame illustrations, where small-moving elements created the animation. 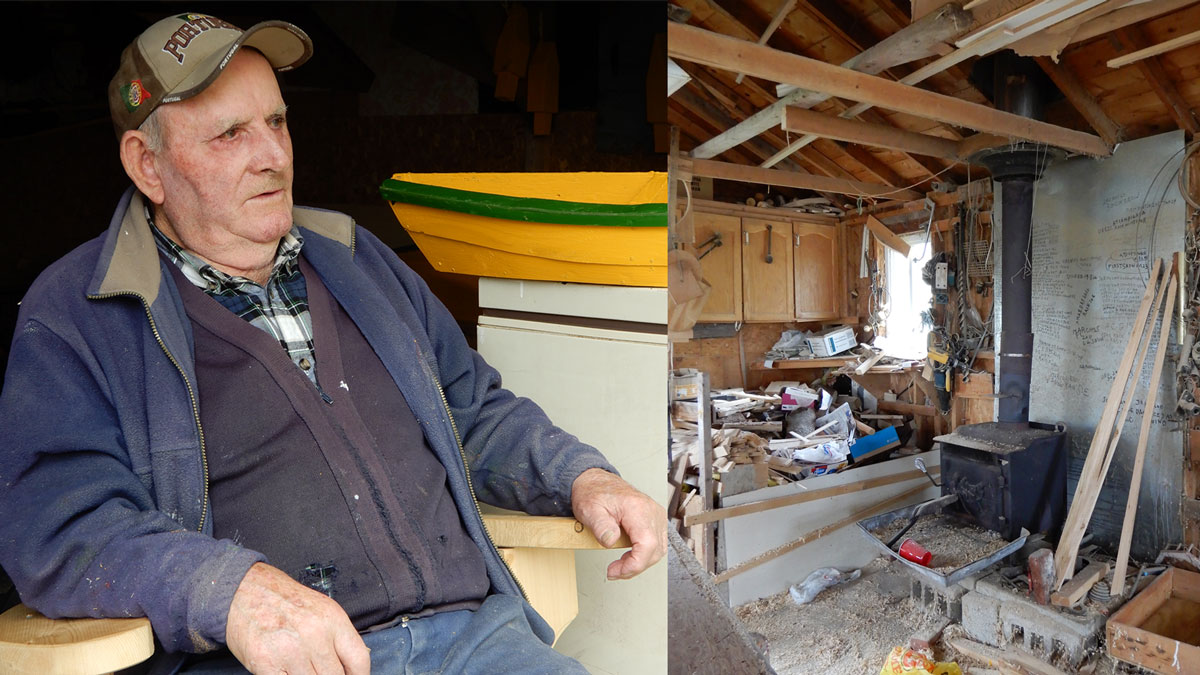 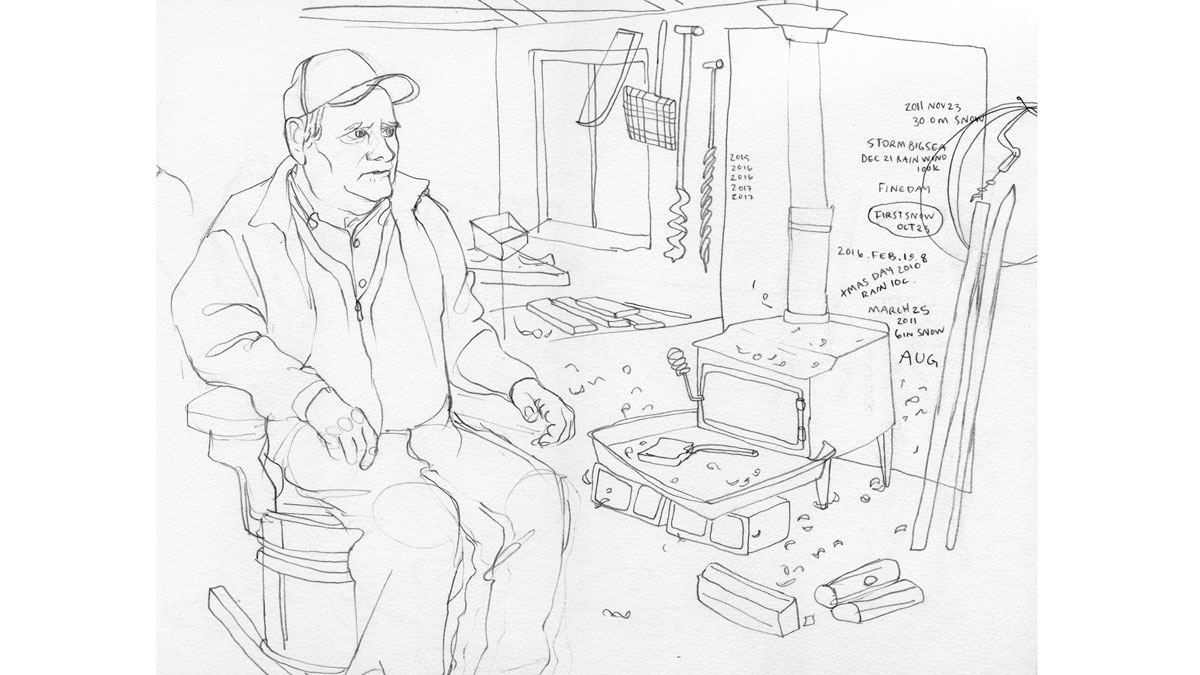 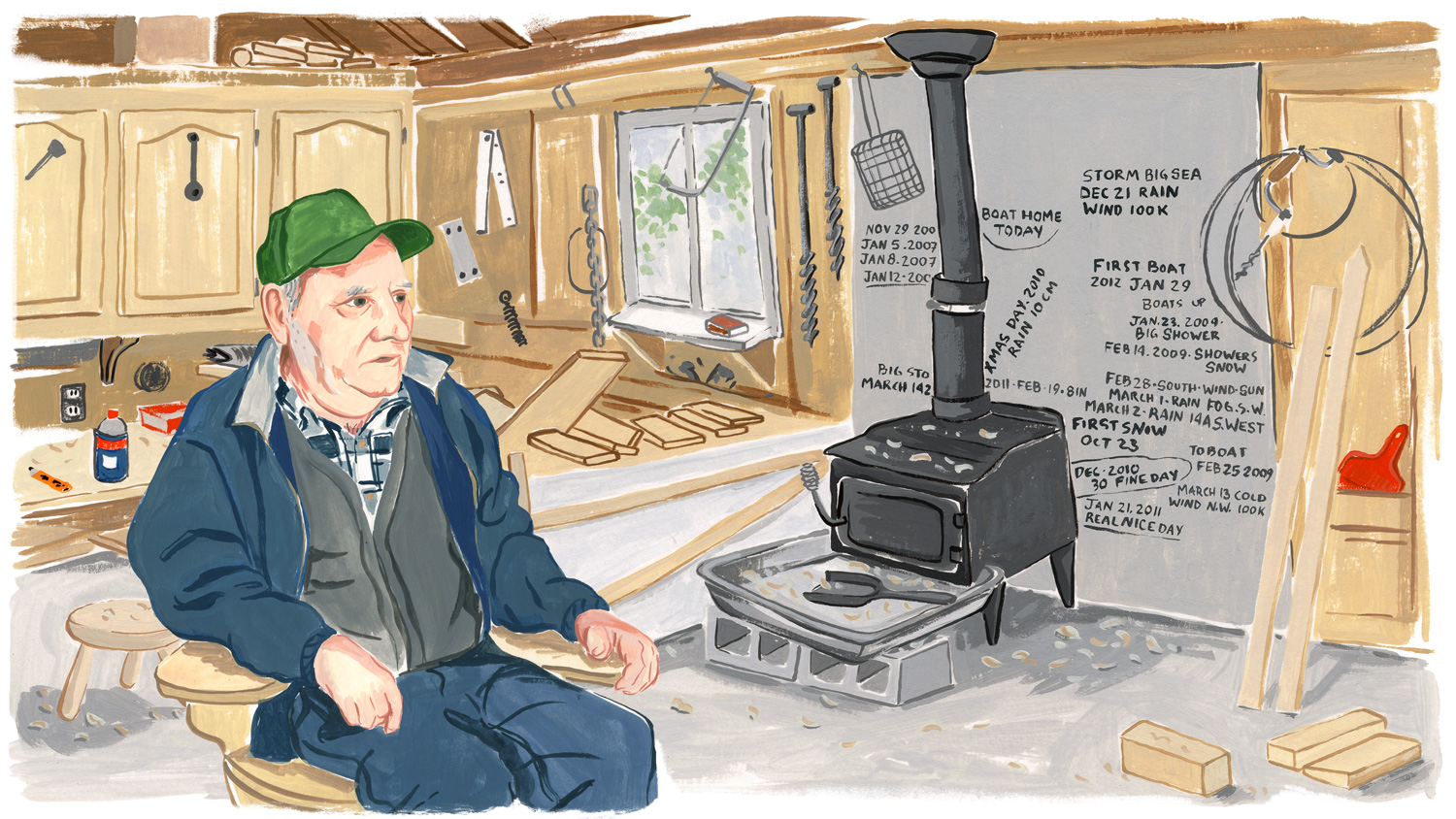 Kat Frick Miller is an artist and book illustrator living in Nova Scotia. Miller received her Bachelor of Arts from NSCAD University in 2009. Kat is known for her playful work exploring east coast heritage and culture. Her vibrant colours and whimsical exploration of the Maritimes lend a distinctive personality to her work. In 2018 Miller illustrated If I Had an Old House on the East Coast, a celebration of the East Coast lifestyle and cultural heritage, by Wanda Baxter and published by Nimbus Publishing. Miller works in traditional mediums including watercolour, ink and gouache.

Jenn Thornhill Verma is a journalist and landscape painter living in Ottawa, from Newfoundland and Labrador. Verma has Masters degrees of Fine Arts (Creative Nonfiction, University of King’s College) and Science (Medicine, Memorial University of Newfoundland). In 2020, Jenn became a fellow of The Royal Canadian Geographical Society. In 2019, she published her first book, Cod Collapse: The Rise and Fall of Newfoundland’s Saltwater Cowboys, which features Jenn’s cover art and is available in print and e-book, by Nimbus Publishing. In 2020, Jenn’s landscape art was recognized for best cover (magazine) at the Atlantic Journalism Awards (AJAs). Jenn has also been nominated twice for best profile article at the AJAs and as best new magazine writer at the National Magazine Awards.