“Deeply held preconceptions keep us from seeing the true nature of some animals. The polar bear is a prime example,” writes Michael Engelhard in his new book, Ice Bear: The Cultural History of an Arctic Icon. “Over the past eight thousand years, we have regarded it as food, toy, pet, trophy, status symbol, commodity, man-eating monster, spirit familiar, circus act, zoo superstar, and political cause célèbre. We have feared, venerated, locked up, coveted, butchered, sold, pitied, and emulated this large carnivore. It has left few emotions unstirred.”

With those words, Engelhard, a wilderness guide in Alaska who has a master’s degree in cultural anthropology, sets out to unearth the history of the attitudes and beliefs that govern the relationship between humans and polar bears. “No such title exists,” says Engelhard, “so I wrote my own.”

Here’s an edited excerpt from the book, which is available starting Nov.14.

Today, no animal except perhaps the wolf divides opinions as strongly as does the polar bear, top predator and sentinel species of the Arctic. But while wolf protests are largely a North American and European phenomenon, polar bears unite conservationists—and their detractors—worldwide.

In the new millennium’s politics, polar bears play the part whales played in the 1980s. From a theatrics-as-protest perspective, their shape lends itself better to impersonation than that of a rainforest or whale. Activists take advantage of this. Dressed as polar bears, they show up in the most unlikely places—the Kremlin, or Ottawa’s Parliament Hill—as nonhuman “climate refugees”. In an act billed as “part protest, part performance,” Greenpeace paraded a mechanical polar bear the size of a double-decker bus through central London, as part of its Save the Arctic campaign. Fifteen puppeteers operated Aurora the bear, which had an articulated head and neck, a mouth like an ice cave, and the real bear’s “slightly lazy” ambling gait.

When climate change became a pressing political issue, zoos that had closed polar bear exhibits or were planning to do so because of their high costs reversed course, making sure polar bears were on hand. In part, this reflected zoo visitors’ growing interest. But zoos also stepped up their breeding programs when the species was listed as threatened—many of their bears were well past the reproductive age. They soon increased their holdings also with abandoned cubs and “problem” bears removed from the Arctic.

Like captive breeding programs and reintroduction efforts in general, science-assisted interventions in the field raise the question of what constitutes wildness, or the bearness of polar bears. One of several emergency actions proposed to relieve starving bears has helicopters airlift food to the “most accessible” ones, at a cost of $32,000 per day. Other last-ditch efforts biologists suggest include relocating bears farther north, where sea ice will last longer; moving more bears to zoos; and even euthanizing those unlikely to survive on their own. Some Inuit who decry even the radio-collaring of polar bears as disrespectful to the animals and who are tired of “outsiders” meddling say to just let them be.

With the polar bear caught in the media’s limelight, some Canadians began to consider it a more fitting national emblem than the beaver. In an attempt to oust the official signature animal—“the dentally defective rat”—one senator reminded her fellow citizens that a country’s symbols are not constant and can change over time. When that senator pitched it as a new national symbol, the polar bear had already reinvigorated Canada’s oldest trade, which the animal rights movement’s stance against wearing fur had previously damaged. Since the bear’s numbers were thought to have declined and restrictions on hunting it consequently tightened, its value as status symbol rose, to a level comparable to its first appearance in Europe during the Middle Ages. Sports hunters now pay up to $30,000 to shoot a polar bear in Canada. In the last five years, the price of pelts alone doubled, with the best selling for $20,000 or more. Even in small amounts, legal polar bear hair, used in fly-fishing, is hard to obtain. Like real flies, lures made with the hollow hairs settle gently on water. There is no equivalent, and patches of pre-treaty skin with hair sell for $6 per square inch in the United States.

All this encourages poaching, especially in Russia, where 40 to 200 bears are killed each year. Their skulls and skins enter the market with false Canadian documentation, the forging of which itself is a lucrative business. The resurgent demand for fur rugs, claws, carved masks with polar bear fur, and similar items comes largely from Russia and China, where a growing middle class spends money on status symbols that are passé in the West. South Koreans, on the other hand, buy dried polar bear gallbladders for “medicinal” uses, at $3,000 a piece.

Canadian politicians say that initiatives to outlaw the trade or hunting are based more on emotion than on science and that the hunting quotas are sustainable. (Inuit and trophy hunters kill about 600 polar bears per year.) In the feelings it awakens, this controversy resembles the “seal wars” of the 1970s and 1980s, when big-eyed, white “baby” harp seals clubbed on sea ice caused furor and even French sex symbols became activists. Impassioned appeals, however disguised, come from both sides. “A ban would affect our ability to buy the necessities of life, to clothe our children,” an Inuit representative at the 2013 Convention on International Trade in Endangered Species conference said. “We have to protect our means of putting food on the table and selling polar bear hides enables us to support ourselves.” Perhaps by intention, this statement counts on our empathy, on our instinct to nurture and protect the human young and frail.

The same spokesman redirected the discussion toward the root cause of the polar bear’s plight. He accused the United States of compensating for its lack of action on climate change and pollution of the Arctic from drilling and mining, of using the polar bear as a blunt tool, because it is “the perfect poster child.”

Contradictions abound. Matters quickly get complicated. Inspired by the Nazca lines and children’s drawings, the Icelandic artist Bjargey Ólafsdóttir used organic red food dye to paint a gigantic polar bear outline on Langjökull Glacier, as part of a concerted effort by artists and environmentalists to call attention to the 2010 United Nations Climate Change Conference in Cancun. It looked as if Earthlings had made a statement for extraterrestrials, showing them that they care about bears. 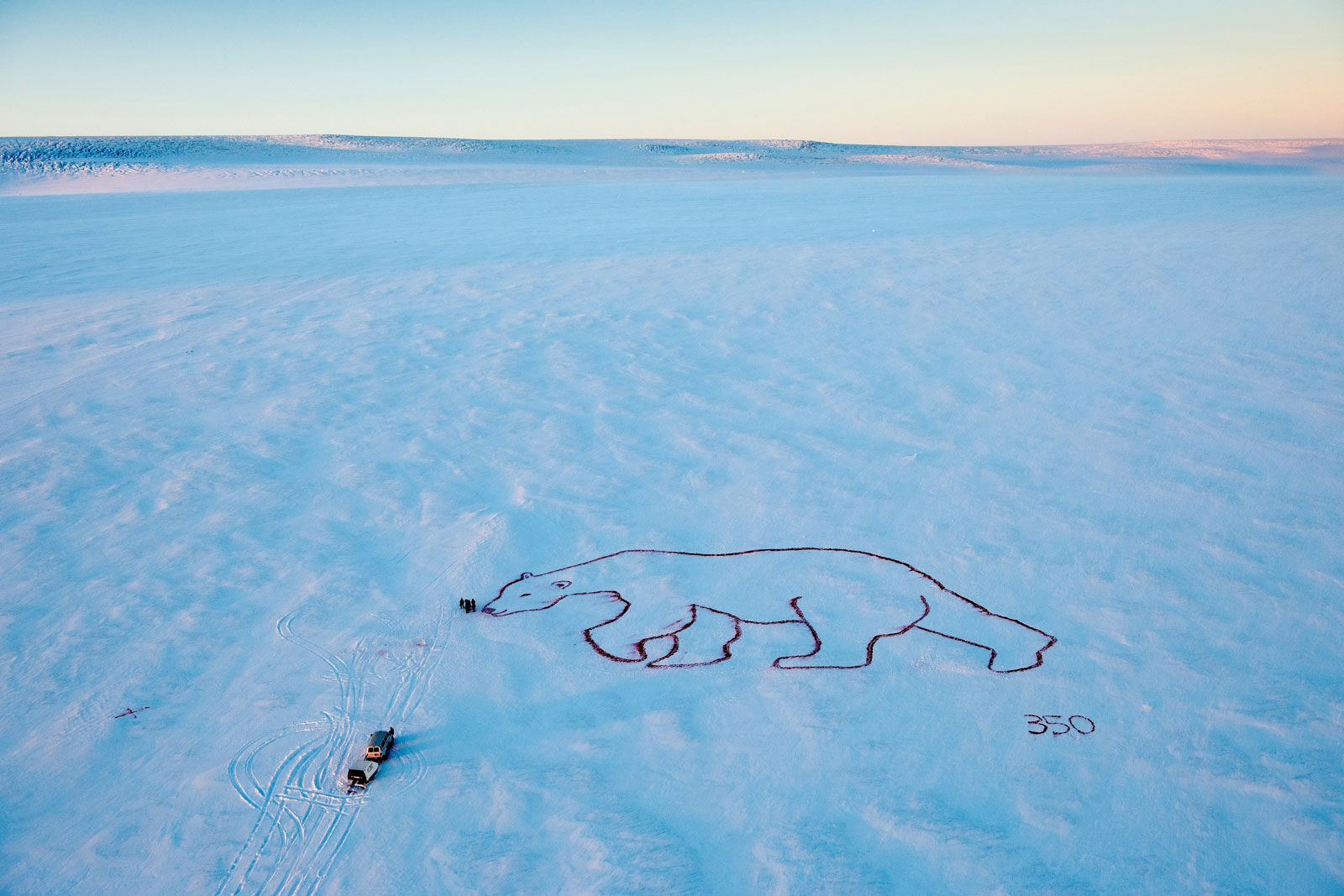 The Icelandic artist Bjargey Ólafsdóttir painted this outline on Langjökull Glacier to draw attention to activists’ demands to reduce the amount of CO2 in the atmosphere from its current level of 400 parts per million to below 350 ppm. (Photo: Christopher Lund.)

Less than half a year later, coast guard personnel killed a real polar bear stranded on Iceland’s northern coast—as bears have since Norse times—because it might disappear into the fog, wander into more densely populated areas, and there pose a risk to the public. A fraction of said public was very upset by the killing. It suggested marooned bears be outfitted with radio-collars and monitored—and restrained only if they became dangerous. Or they could be tranquilized and transferred to the Reykjavík zoo. Or officials could catch, cage, and repatriate strays to Greenland, where, of course, they might also get shot, as part of that country’s hunting quota for Natives. The polar bear killing in Iceland in 2010, like one in 2008, garnered attention domestically and internationally. Many people thought it “unfortunate” that Icelanders were killing bears when most of the world (and some prominent Icelanders) felt that the bears needed special protection. A rich Icelandic businessman offered the use of his private jet, and to pay for the polar bear’s relocation.

Like the bear that Viking merchants traded to Europe’s nobility, the emblem of nature conservation is precious as a commodity and as a pawn in political maneuvers. Even if we never reach the point where polar bears are fed bear kibble from helicopters, bears today, managed and marketed, no longer seem quite “pure” or genuinely wild. While the blending of consumer logos and wildlife might strike some people as odd, it is also no longer limited to the corporate sector. The president of Polar Bears International, a former marketing director, is dedicated to turning the bear into a recognizable environmental brand, “spinning” its image on guided tours outside Churchill. Still, overexposure and a desensitized public could weaken the message and the “Lord of the Arctic” fade to a new cliché. Some critics think polar bears have already begun to disappear in the white noise of our culture. “The polar bear has lost a lot of its cachet,” the writer Jon Mooallem said in an interview. “It’s become too political. It doesn’t really resonate with environmentalists anymore and it ticks off everyone else.” Summing up the dilemma of image, Mooallem claimed that, “In the twenty-first century, how species survive, or go to die, may have to do more with Barnum than with Darwin.”

Book excerpt from Ice Bear: The Cultural History of an Arctic Icon, by Michael Englehard, published by University of Washington Press