By protecting the Muskwa-Kechika, a vast, wild region of mountains, glaciers, and boreal forest in north-central B.C., we can create a climate refuge for vulnerable species
By John Weaver
September 24, 2019

We know that if we want to deal with the climate crisis and its impacts, we need to take significant steps right now. But not all of those steps are about switching from coal to solar or wind power. We also need to take big, bold steps to provide wildlife room to roam in order to help them survive rapidly changing conditions.

One place we can take such a step is in the Muskwa-Kechika — a spectacularly wild region of rugged mountains, verdant valleys, glaciers and boreal forests in north-central British Columbia. The Muskwa-Kechika is one of the most intact wild areas remaining on the planet. Four times the size of Vancouver Island, it is an area with few roads (98 per cent roadless) and little resource development. The result is intact forests, clean water, and healthy wildlife populations. Caribou, for example, are thriving there, unlike in southern B.C. where almost every caribou population is skidding toward extinction.

In addition to its namesake rivers, the Muskwa and the Kechika, the area contains the unprotected headwaters of the mighty Liard and Peace Rivers. The 300-kilometre stretch of the Rocky Mountain Trench (which is so prominent it can be seen from space) that bisects the Muskwa-Kechika is the last wild section of this amazing geologic feature left in B.C.

It’s not just its very light human footprint that makes the Muskwa-Kechika unique. It also has a high level of habitat diversity due to its varied topography, different landforms, and many lakes and wetlands — all of which provide options for plants and animals to adapt as climate heating accelerates. In particular, this diversity offers wildlife important “climate ramps” — the ability to move to higher elevations along slopes leading up to the Continental Divide or along river valleys from mouth to headwaters. 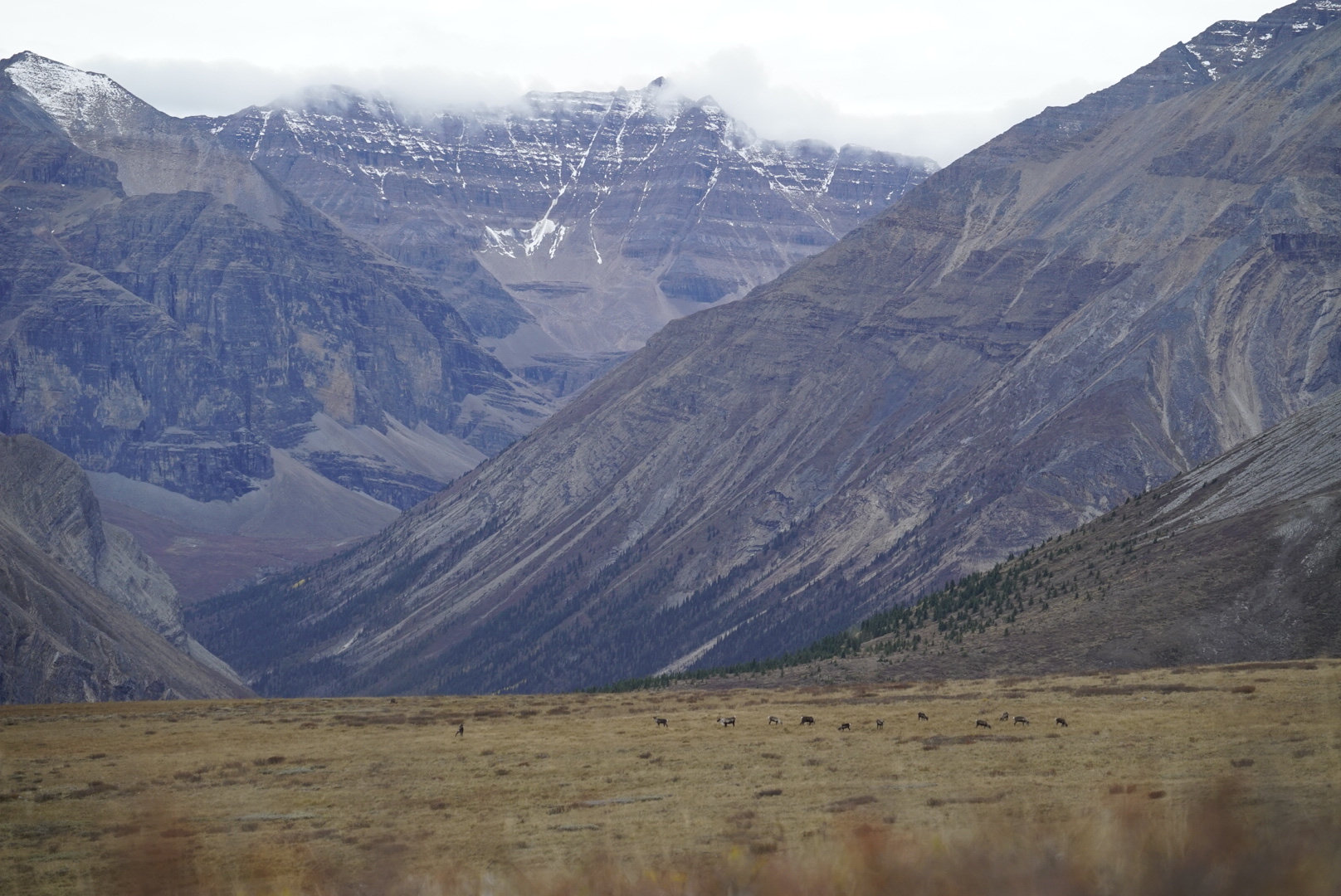 Unlike in southern B.C., caribou are thriving in the Muskwa-Kechika. (Photo: Ryan Dickie, winterhawkstudios.com)

Recognition of the Muskwa-Kechika’s world-class features is not new. The Muskwa-Kechika Management Area (MKMA) was established in the late 1990s in a first effort to protect some of its most important pieces. But in the face of a hotter climate and continuing impacts on wildlife and waters from industrial resource development, we now understand that we have to do more. With only a fraction of the area currently protected, there is still a long way to go to ensure real long-term protection for species and spaces throughout the Greater Muskwa-Kechika. Connecting existing protected areas and expanding protection into additional wildlife-critical areas to the north and south of the MKMA can create an incredibly important climate refuge for vulnerable species, including coldwater-dependent bull trout and Stone’s sheep, a unique sub-species found almost nowhere else on Earth.

Wildlife Conservation Society Canada has mapped a larger and better-connected network of protected areas across the Greater Muskwa-Kechika. We used the latest scientific thinking about conservation and resilience, as well as the latest available data on species and habitats. We focused on four species as our guides in this work: woodland caribou, bull trout, Stone’s sheep and moose. By analyzing the areas of greatest importance to these species, we were able identify where protection of lands and waters could have the most efficient impact.  We also looked at how critical habitats for these species will shift in the face of climate warming and how we can protect those all-important climate ramps. Because all four species need large landscape (or aquatic) areas, conserving their habitats will help protect many other species as well.

The result is a proposal to essentially double the existing area of protection in the Muskwa-Kechika to create a globally-significant protected network in what has been called “the Serengeti of the North.”  That may sound like a recipe for conflict with loggers and miners, but in reality, our proposed network has been carefully designed to avoid the few areas in the Greater Muskwa-Kechika where there is any tangible interest in resource development. Doing that while still ensuring that we protect core habitats and connections is achievable because of the scale we are working on here. 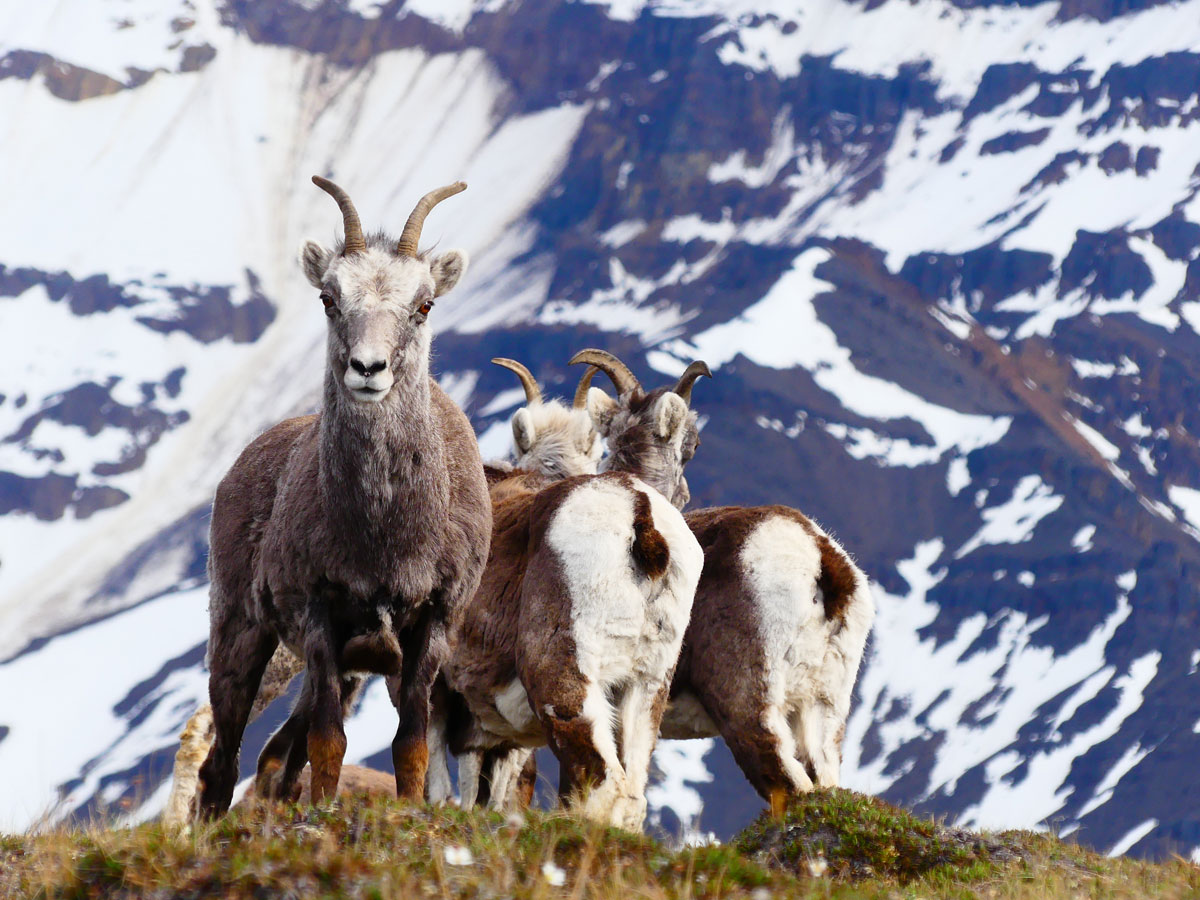 Among the vulnerable species that would benefit from protection of the Muskwa-Kechika are Stone’s sheep, a subspecies of thinhorn sheep. (Photo: Krystall Kriss)

Too often in the past, governments have established protected areas only with an eye to reducing conflict with logging or mining or to protect scenic — but not necessarily highly productive – places.  And too often that has left us with “postage stamp” protected areas cut off from one another and of limited value to wildlife. In the Greater Muskwa-Kechika, we can take a bolder and more proactive approach that better matches the challenges of our times. Here we still have the opportunity to build something great from the ground up by using science to guide land management decisions that will serve both people and wildlife for generations to come.

The Kaska Dena First Nation is advancing its own proposal for an Indigenous Conserved and Protected Area based upon their spiritual beliefs, traditional knowledge and culture. Our recommendations match quite closely to their mapping. This kind of new and innovative approach offers new opportunities for place-based conservation and sustainable economies with real benefits for communities.

For those of us not lucky enough to live beneath the waves of mountain peaks in the Muskwa-Kechika, we can still be content in knowing we have taken a bold step to ensure that places this wild and free continue to exist on our planet.

Dr. John Weaver is a senior conservation scientist with WCS Canada. He has produced vital wildlife research that led to the sevenfold expansion of Nahanni National Park and a groundbreaking conservation plan for Alberta's Bighorn Backcountry.