The author, actor and member of Monty Python wrapped up the Canadian leg of his North American book tour with a sold-out show in Ottawa
By Harry Wilson
October 20, 2018

He opened with a few jokes, of course.

Like how Graham Chapman, his fellow member of Monty Python, once quipped of Regina's location, "Why didn't they put it over there?" Or how John Cleese, another of his Python collaborators, recently tweeted "As you probably know, Michael Palin has written a book about a famous wreck. Having seen him recently, I assume it's an autobiography."

But after the initial wisecracks were over, Palin, the famed British comedian, author, actor and globetrotting explorer, deftly shifted from getting a few laughs to weaving a spellbinding tale of nautical history for the nearly 300 people who packed The Royal Canadian Geographical Society’s Alex Trebek Theatre at 50 Sussex in Ottawa last night to hear him talk about his new book, Erebus: One Ship, Two Epic Voyages, and the Greatest Naval Mystery of All Time.

Clip: Michael Palin on touring Canada with the cast of Monty Python

The book traces the history of HMS Erebus from its launch from a dockyard in Wales in 1826 to its groundbreaking sighting (along with HMS Terror) of the Antarctic continent in 1841 to its final — and fateful — voyage into the Canadian Arctic as part of Sir John Franklin’s expedition to find the Northwest Passage in 1845.

“I started to read about what this little ship had achieved, and the more I read, the more admiring I became of men like James Clark Ross and his crew and what they achieved with Erebus, particularly on their Antarctic journey," said Palin. "It was four years and an amazing amount of information was gathered that no one had ever known before. These were guys going into the unknown, and I just found the image of this little ship going off down through the icefields of the Antarctic extraordinarily powerful. What they did and what the ship represented inspired me a great deal."

Palin’s Ottawa appearance capped the two-city Canadian leg of his North American promotional tour for Erebus. On Wednesday night in Toronto, 400 people lined up around the block to see him at The Opera House. 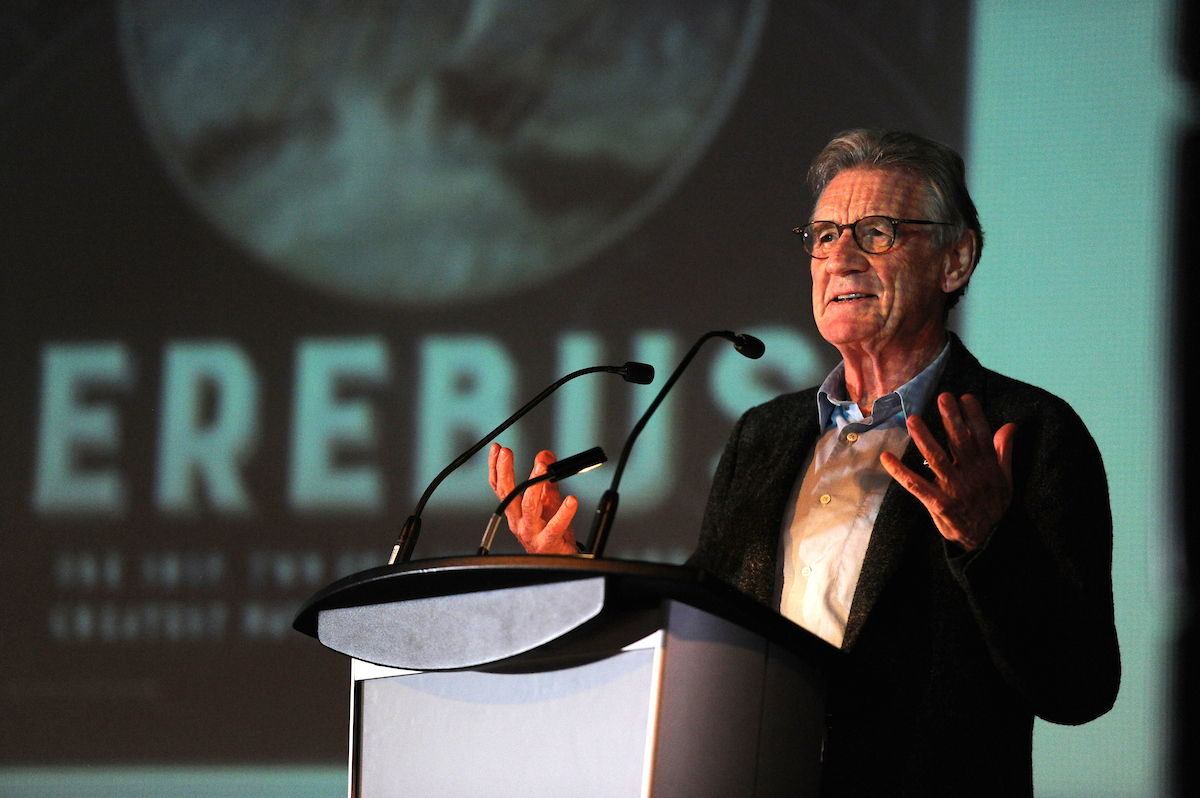 As he did in Toronto, Palin spoke for more than an hour in Ottawa before fielding audience questions on everything from how he came to write about Erebus (he became intrigued while researching a talk on Joseph Hooker, who was the assistant surgeon and botanist on the ship when it sailed to the Antarctic in 1839) to what he thought about a forensic artist reconstructing the faces of crew members of the Franklin expedition (in a word, brilliant).

Clip: Portraits of the Franklin expedition

After the question-and-answer session, Palin got a surprise when he became the inaugural recipient of The Royal Canadian Geographical Society’s newest honour — the Louie Kamookak Medal. “This medal is awarded for a noteworthy deed that has served to advance the discipline of geography,” said John Geiger, the society’s CEO. “Michael, by your decision to tell the story of Erebus, you have shared with your immense audience your own fascination with these remote places of the Earth. For your achievement of this brilliant book, and for the many gifts you have given to geography, I am honoured to announce that you are the first-ever recipient of the Louie Kamookak Medal."

"This is a wonderful surprise and a total honour," Palin said of being awarded the medal. "I never met Louie, but before he died [in March 2018], he'd agreed to take me on a 10-day scouting expedition across King William Island. Sadly, that never happened, but I kind of felt like I knew him. I really don't think I deserve this, but thank you all the same."

Read an excerpt from Erebus: One Ship, Two Epic Voyages, and the Greatest Naval Mystery of All Time