Canada's brightest young geography stars will also have the opportunity to meet adventurer Mylène Paquette, who will host the live final May 28
By Tanya Kirnishni
May 22, 2018

This coming weekend, youth from across the country will descend on Ottawa to take part in one of Canada's biggest student competitions. From May 26 to 28, the 23rd annual Canadian Geographic Challenge will see the country's brightest young geographers vie for the title of National Champion.

More than 22,000 students in Grades 7 to 10 participated in this year's Challenge. Twenty students qualified for the national final, which consists of a written test, a fieldwork round and a live trivia-style final. Only the top five students will advance to the live final, which will be held at the Canadian War Museum. Adventurer Mylène Paquette, the first woman from North America to row solo across the North Atlantic, will be hosting the final.

In advance of their big weekend, the finalists were asked to share a little bit about their hobbies, role models and dreams.

Aakash is a member of his school’s robotics team, as well as the writing and science clubs. His role models are Carl Sagan, Neil deGrasse Tyson and Brian Cox. Aakash wants to work in the field of physics/astrophysics or as a software engineer. 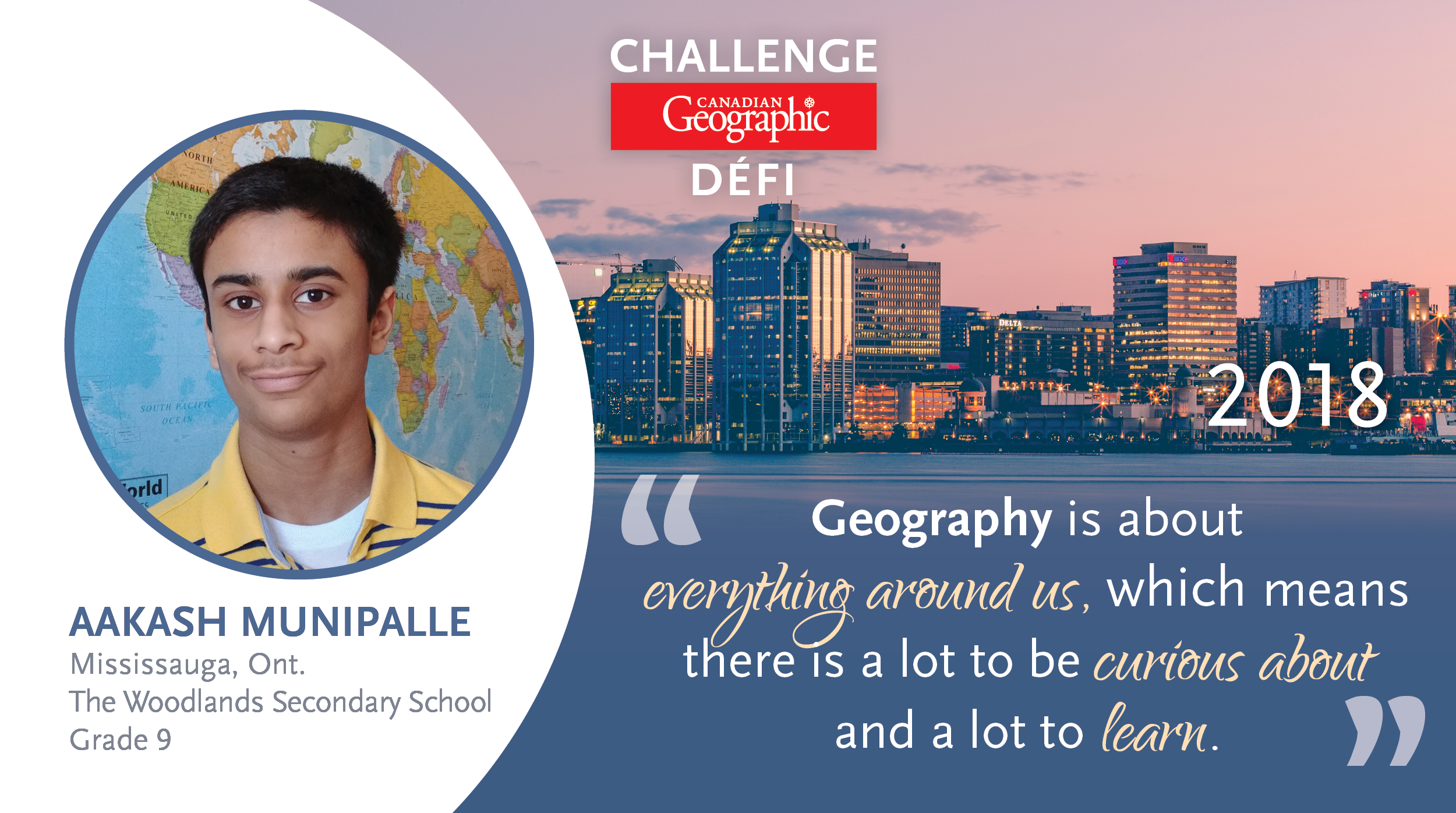 Daniel is on his school’s Reach For The Top team, plays in the music program, and participates in Model UN. He is interested in problem solving and physical geography and wants to become a civil engineer or an urban planner. 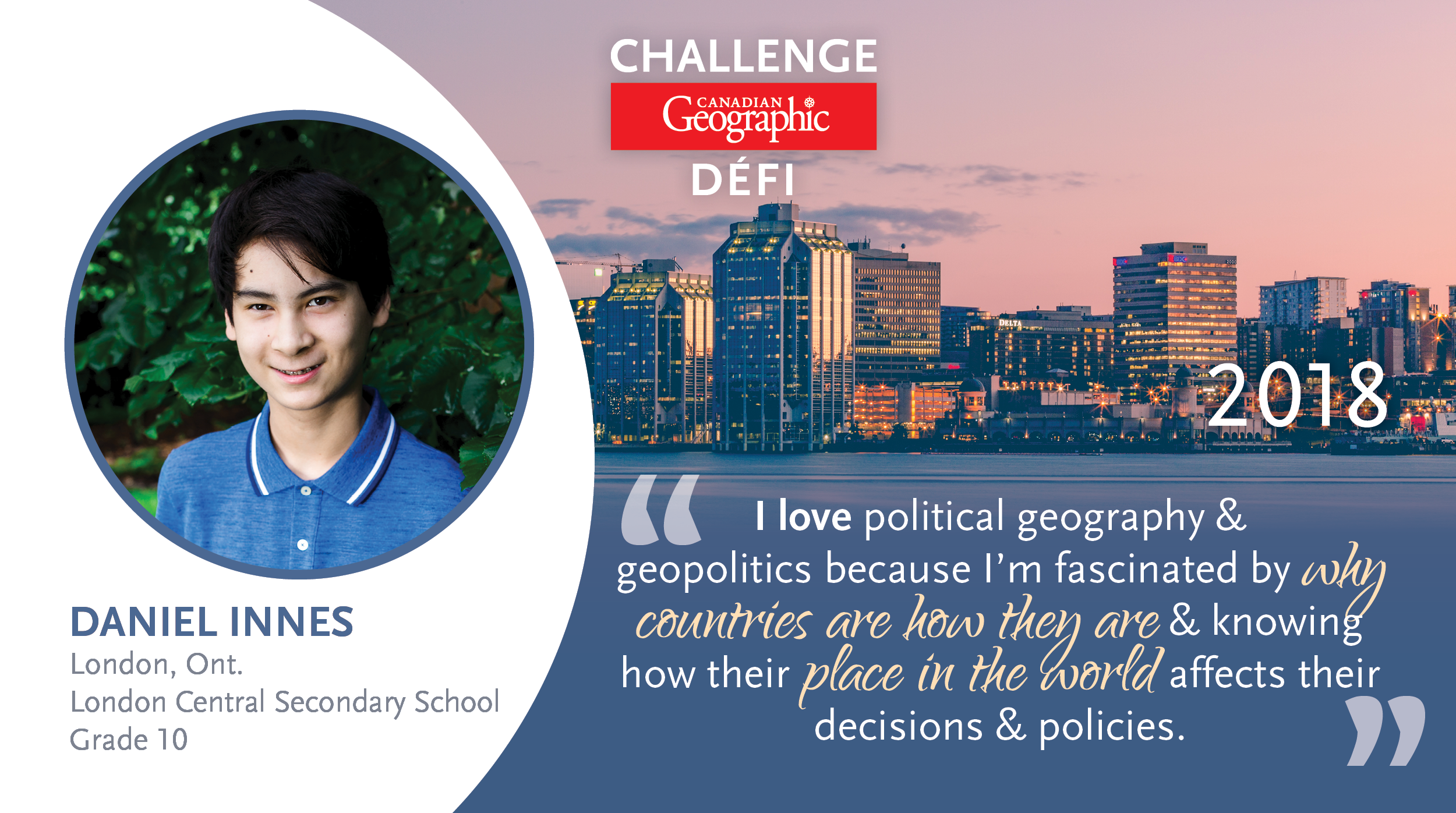 David leads an active life and participates in baseball, curling, and swimming. He is also a member of his school’s junior jazz band, the school’s Reach For The Top team, and he volunteers at a local Boys and Girls Club. 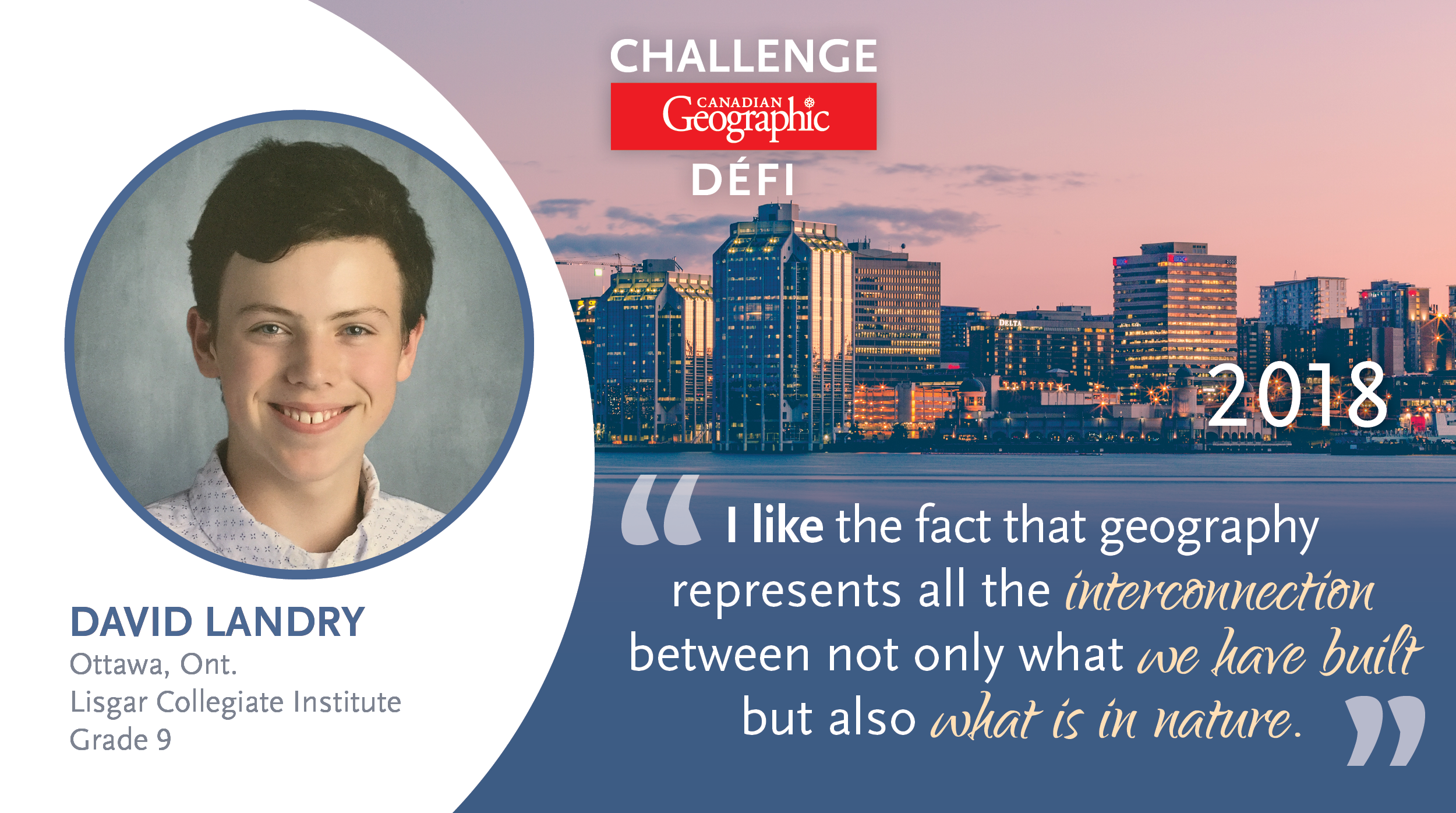 Dhruv wants to become a psychiatrist and is interested in how health care data can contribute to overall quality of life in an area. His role models are his parents, who support and encourage him to be his best self. 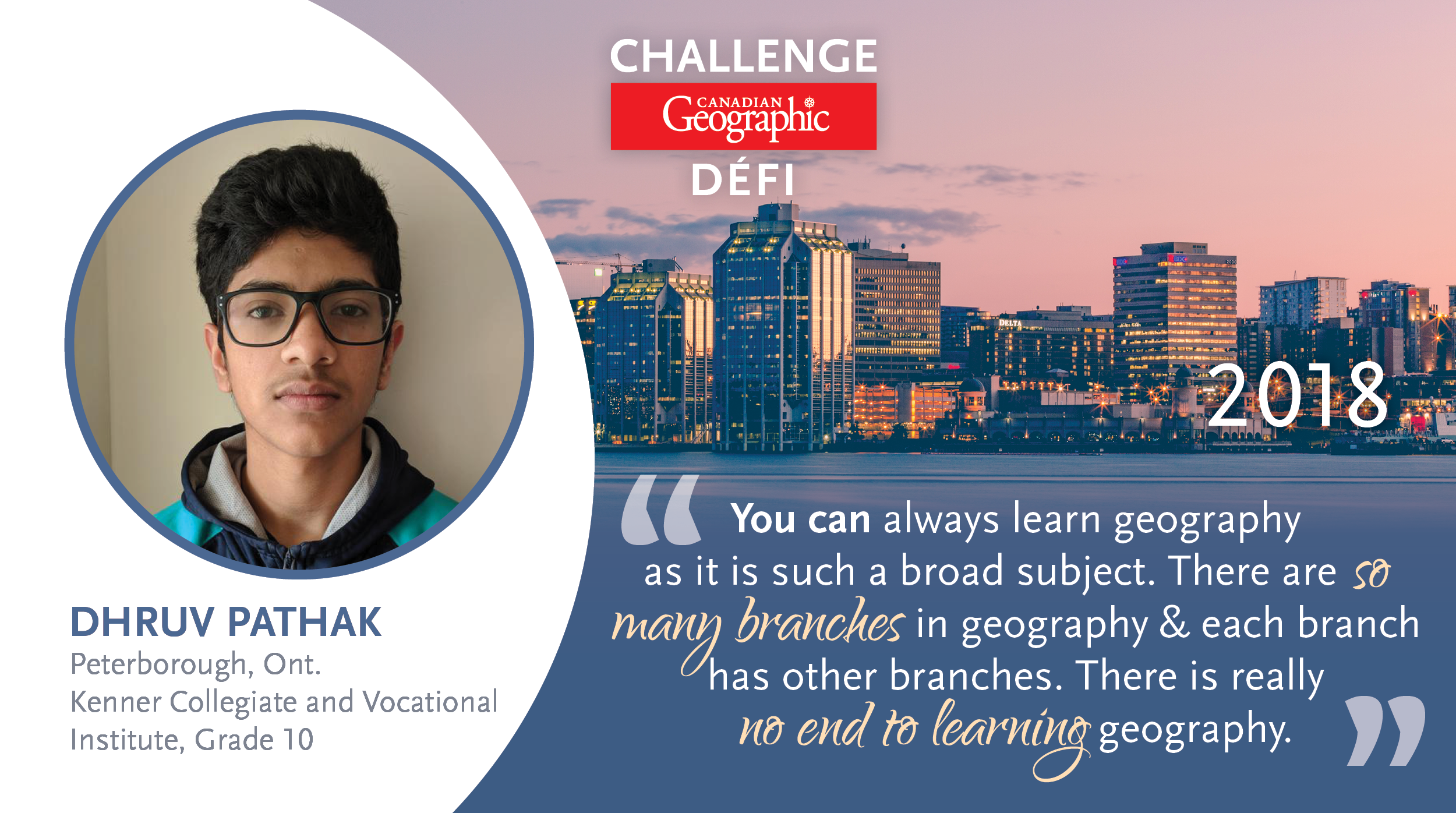 Erik participates in student council and takes karate classes after school. He loves animals and wants to become a veterinarian. Over the course of many family vacations, Erik has visited more than 50 zoos and aquariums. 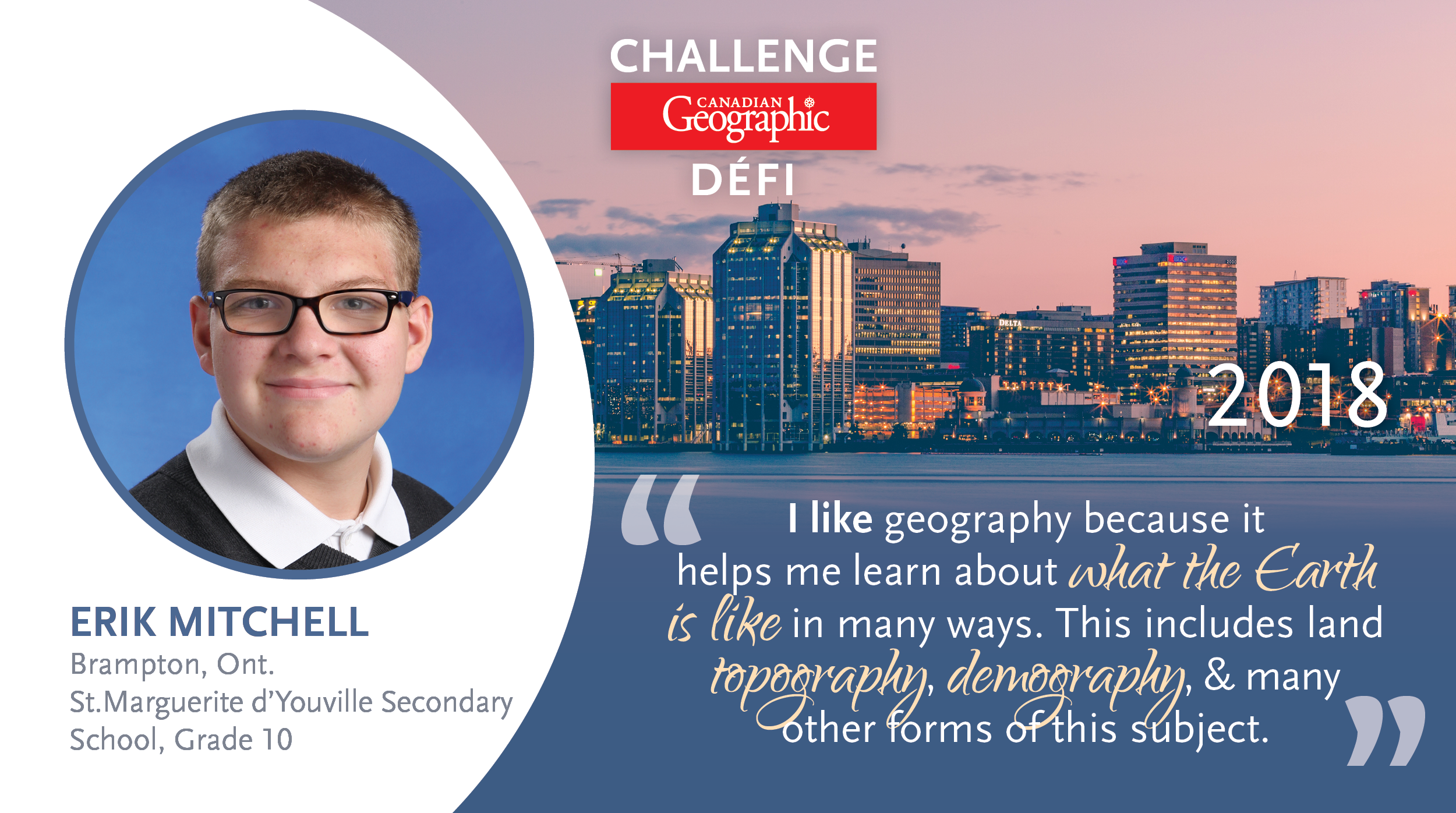 Evan loves to travel and experience new cultures. In his spare time, he plays soccer, skis, goes mountain biking, and hangs out with his friends. He also plays trombone in a jazz band and volunteers at a community food kitchen. Last year, Evan made the top five in the Challenge and competed in the live final. 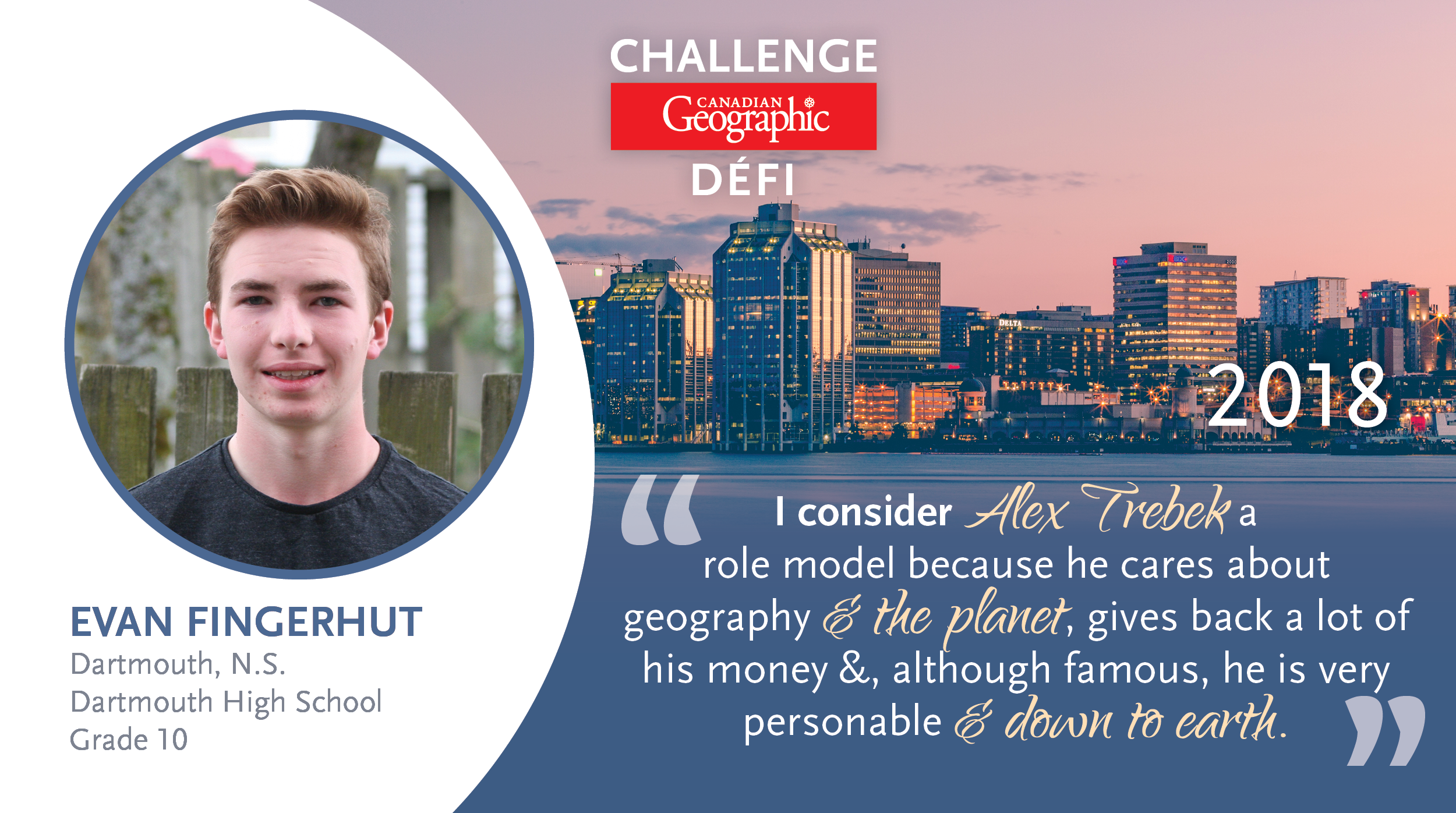 In his free time, Herman enjoys swimming and playing tennis. He looks to his Catholic faith for guidance and considers Jesus Christ to be his role model. Herman wants to become a lawyer to help people who struggle against injustice. 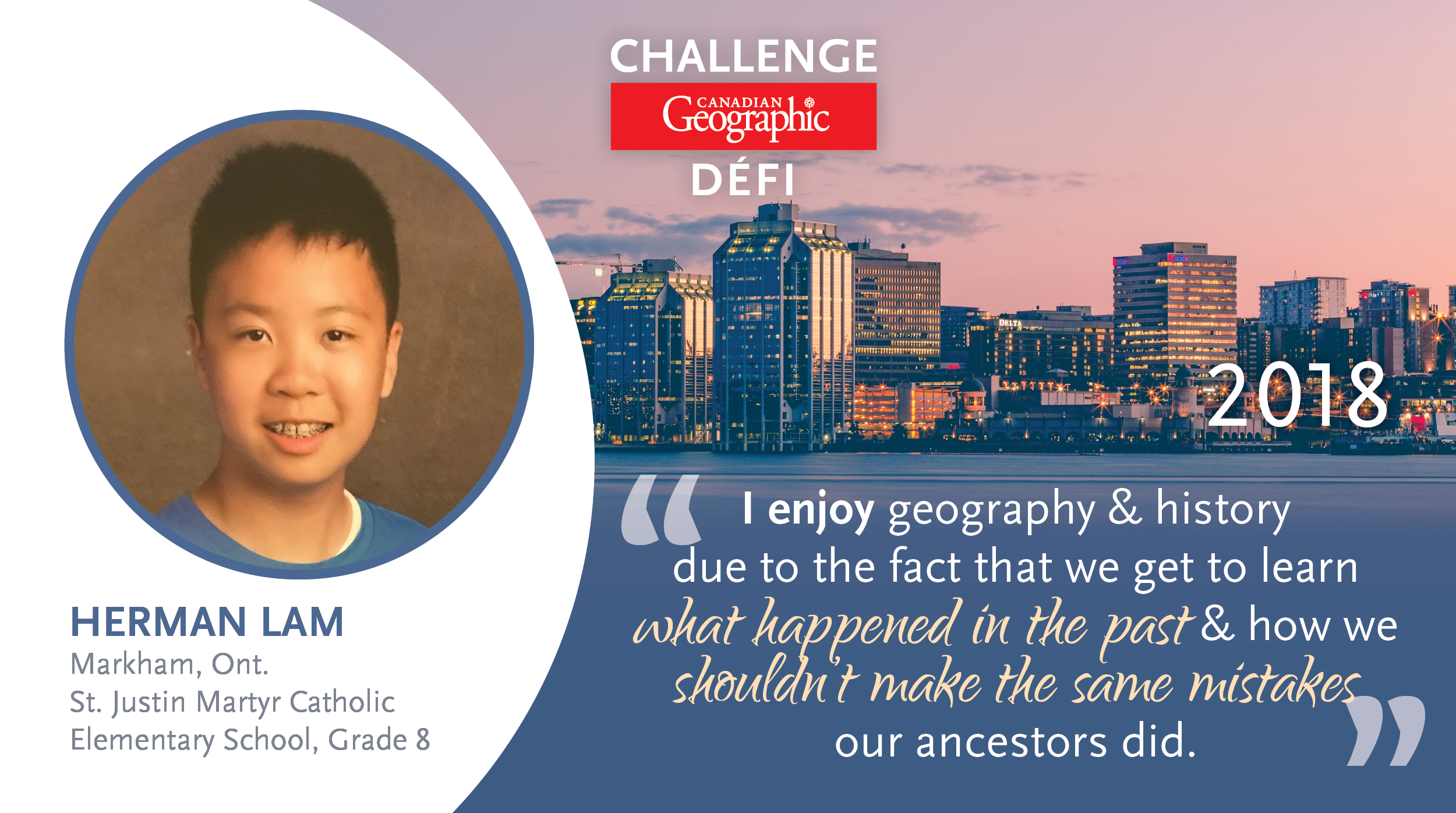 Jake believes geography is best learnt outdoors and loves to go cross-country skiing and canoeing. He wants to work in environmental conservation and admires the work of late filmmaker and conservationist Rob Stewart. Jake was a top five finalist in the 2017 Challenge. 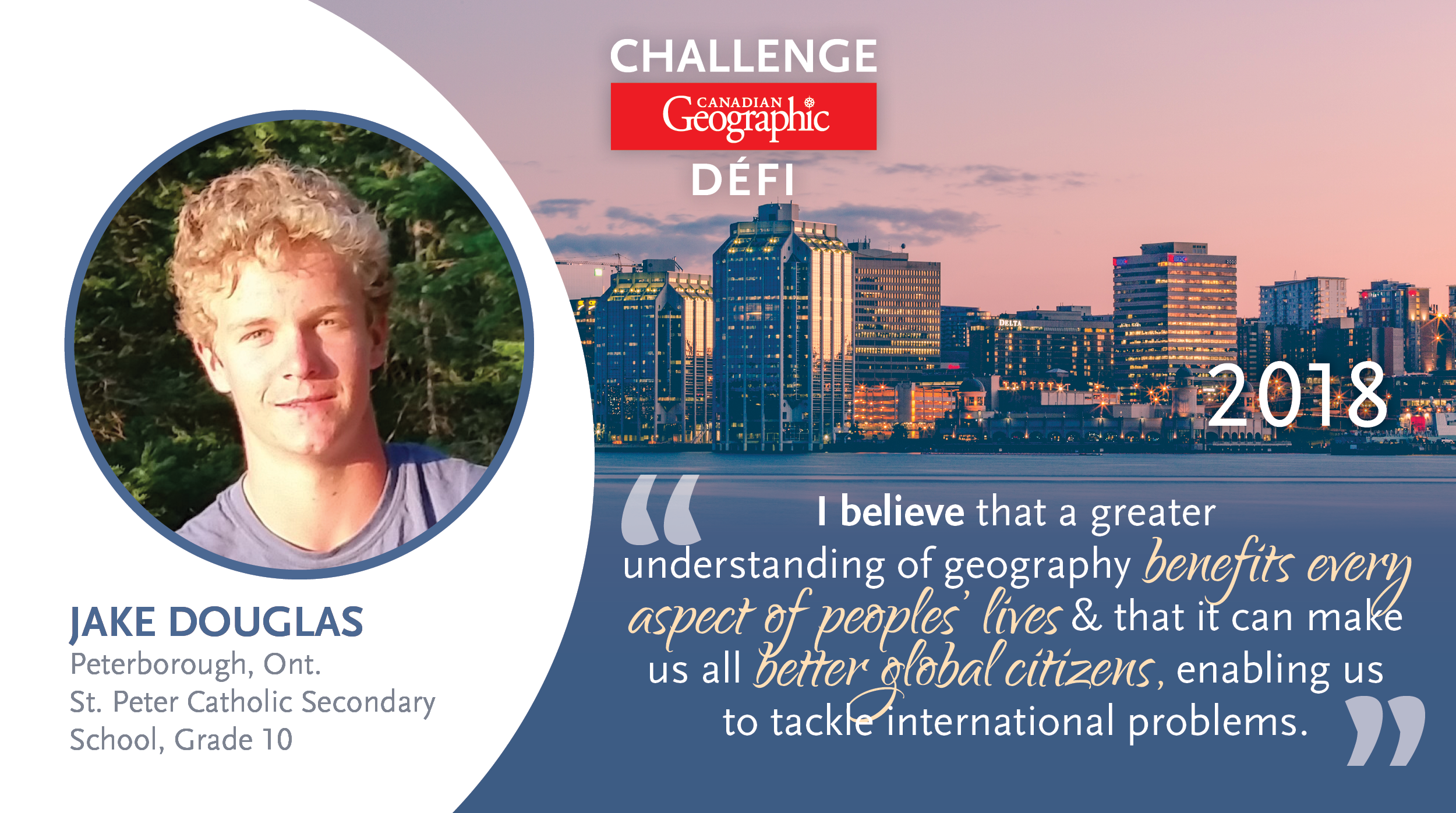 Jerry loves trivia, competing in math contests and science fairs. He participates in cross-country and track, swimming, and volunteers at his local community centre. Jerry enjoys coding and hopes to pursue a career in robotics or computer science. 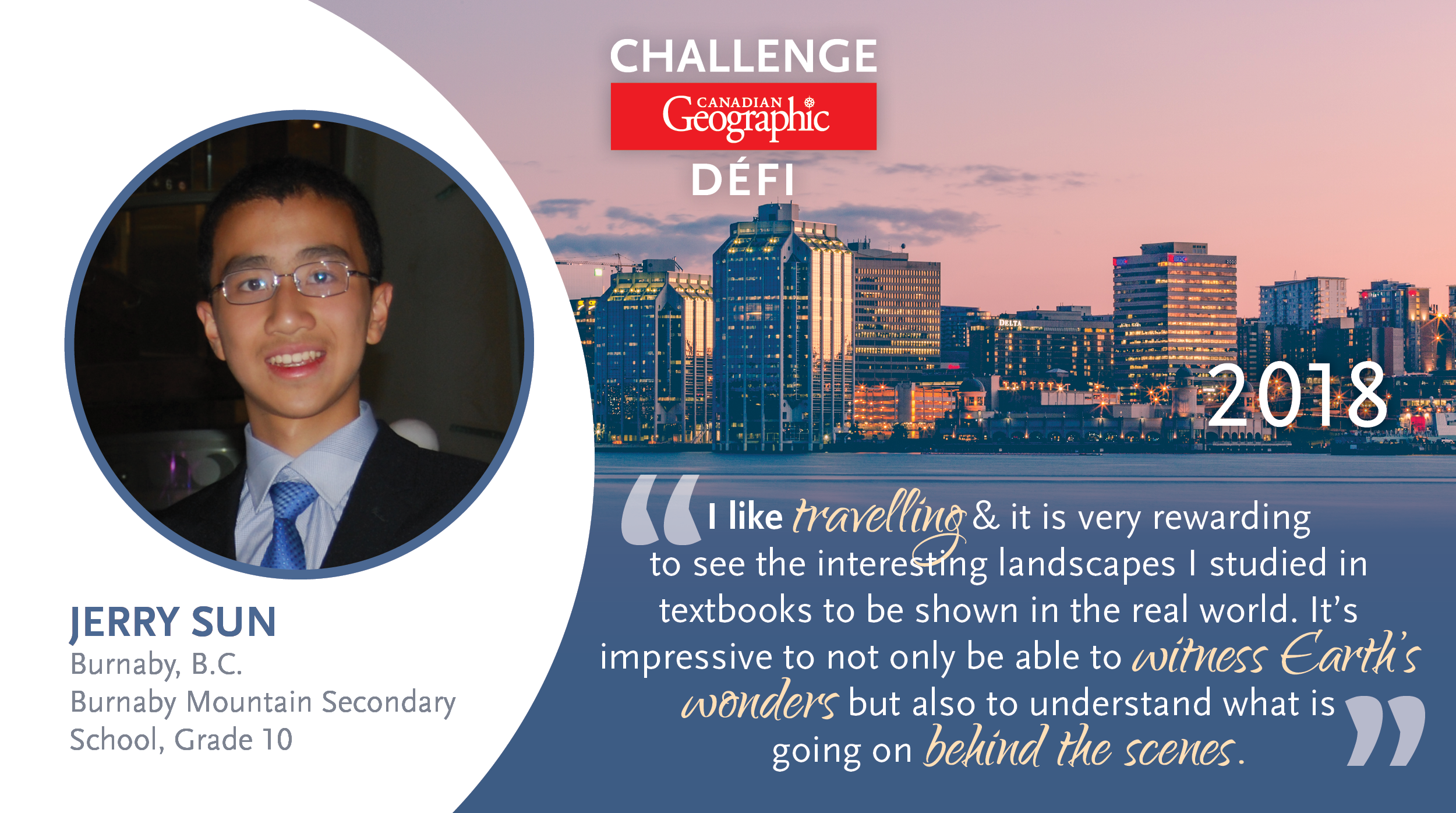 Lamia is whirlwind of activity. She does boxing, tae-kwon-do, swimming, photography and art. She also plays piano, flute, ukulele, and sings. At school, Lamia participates in Me to We, Theater Troupe, FLL Robotics, math club, and equity club. 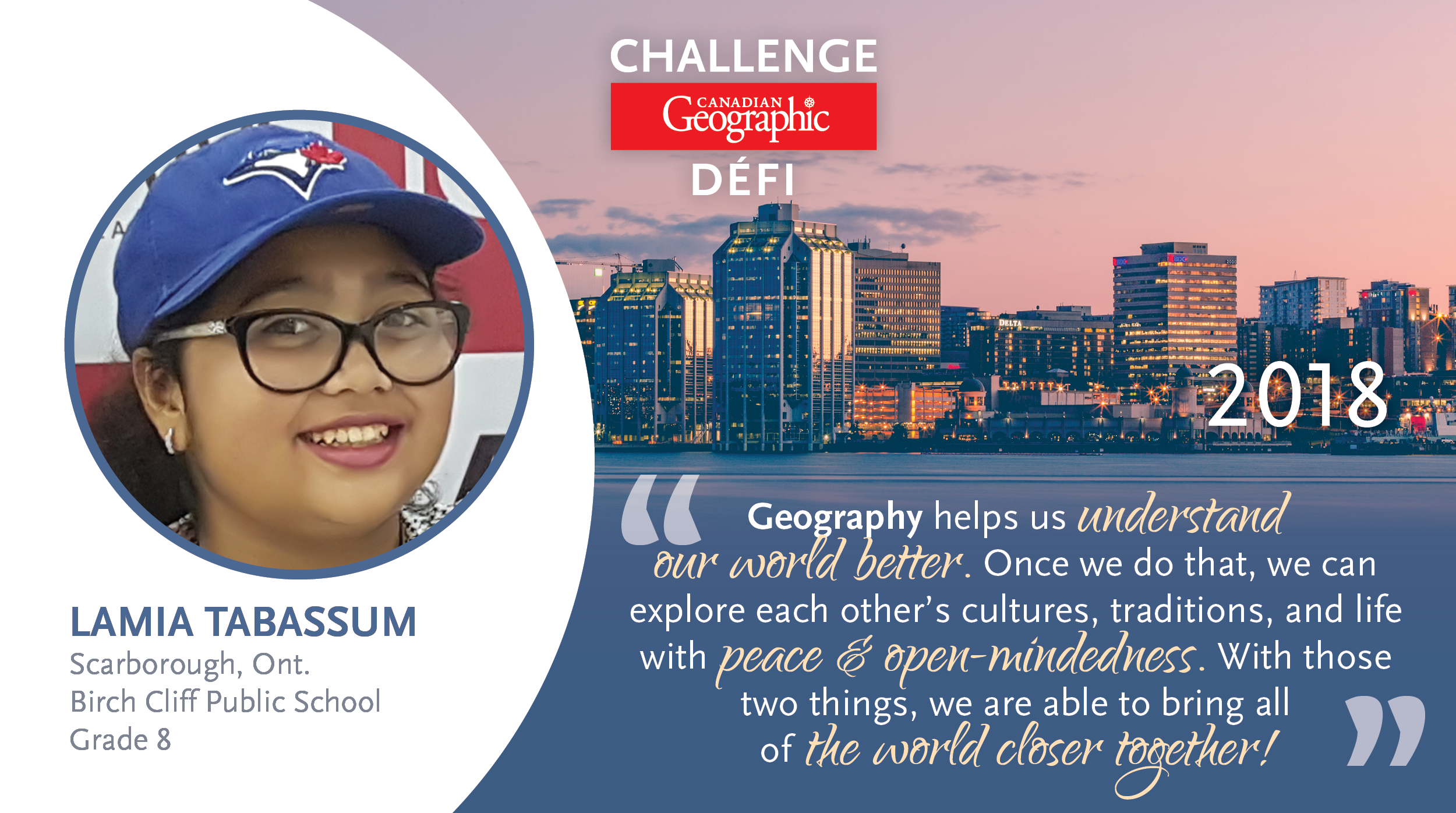 Nich, a cartographer in the making, draws his own maps, digitally and by hand. He loves watching documentaries and keeps up with politics. Nich is in debate club and aspires to be like Sir Winston Churchill, whom he admires for his determination. 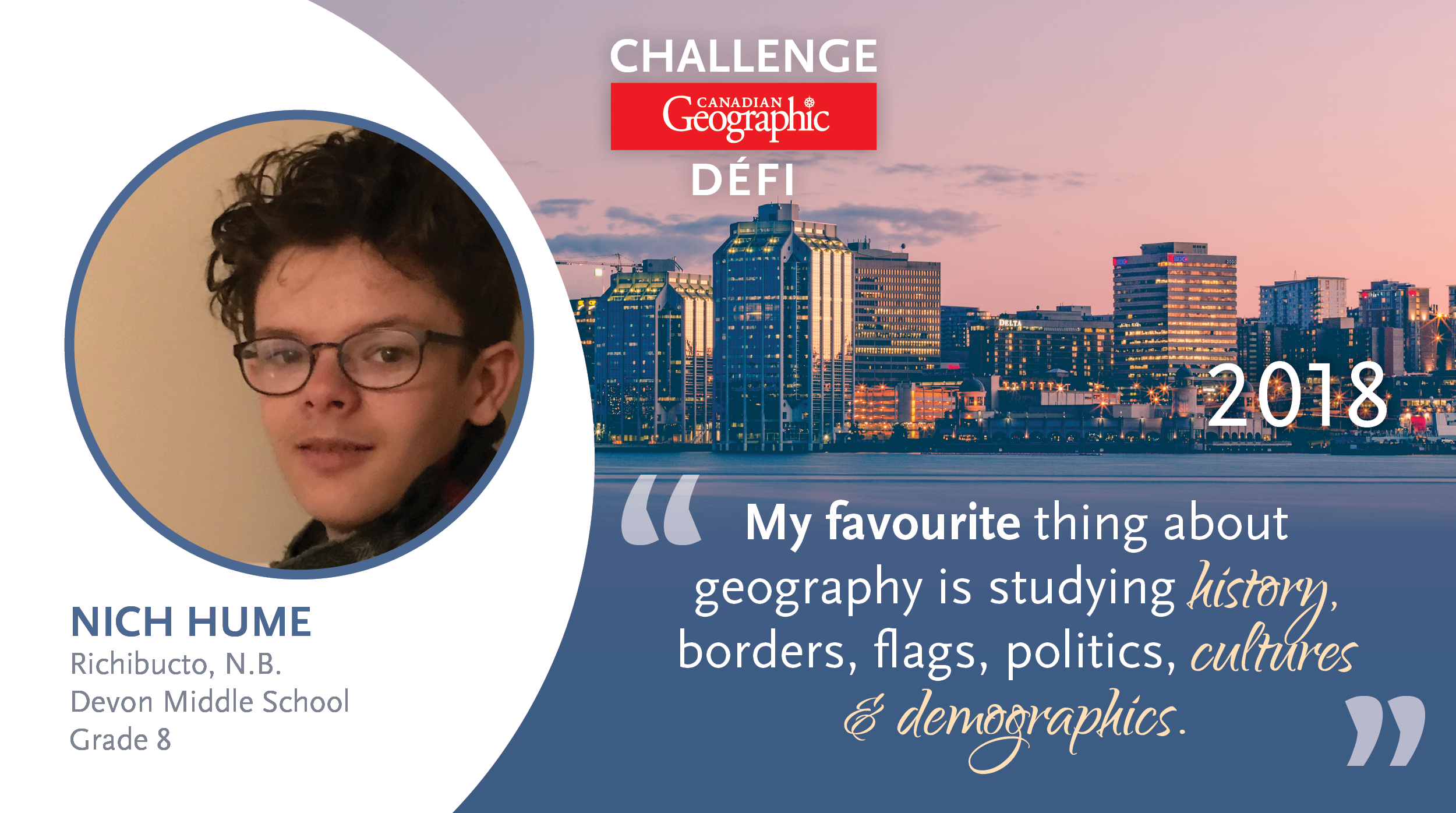 In his spare time, Noah enjoys reading, travel, and music. He plays both piano and guitar. Noah also likes swimming, badminton and participates in his church fellowship. His career interests include engineering, cartography, and architecture. 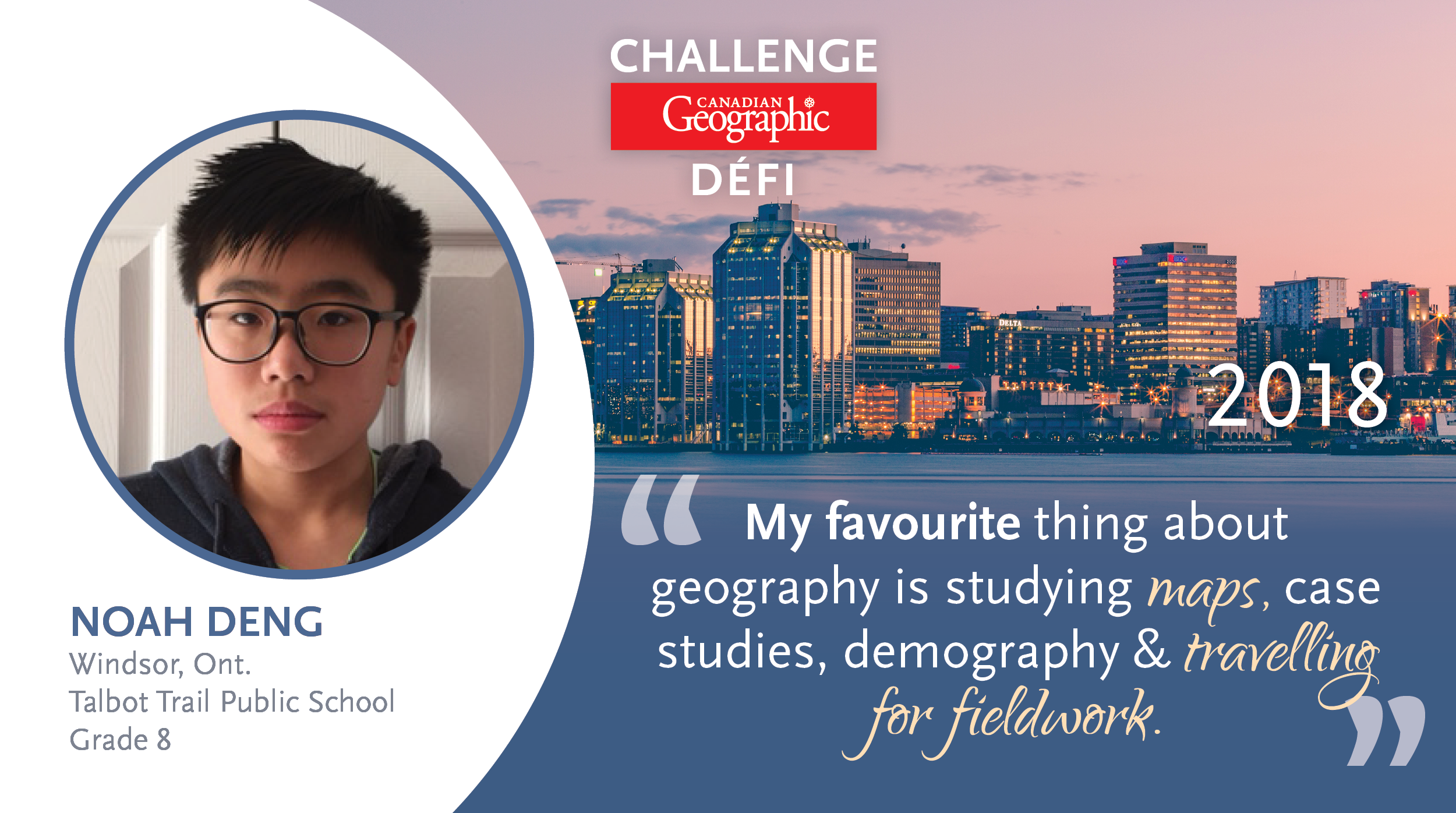 Ryan loves learning new things and at school he participates in Reach For The Top and Model UN. Ryan’s other interests include table tennis, badminton, collecting stamps, playing the trumpet, and writing. 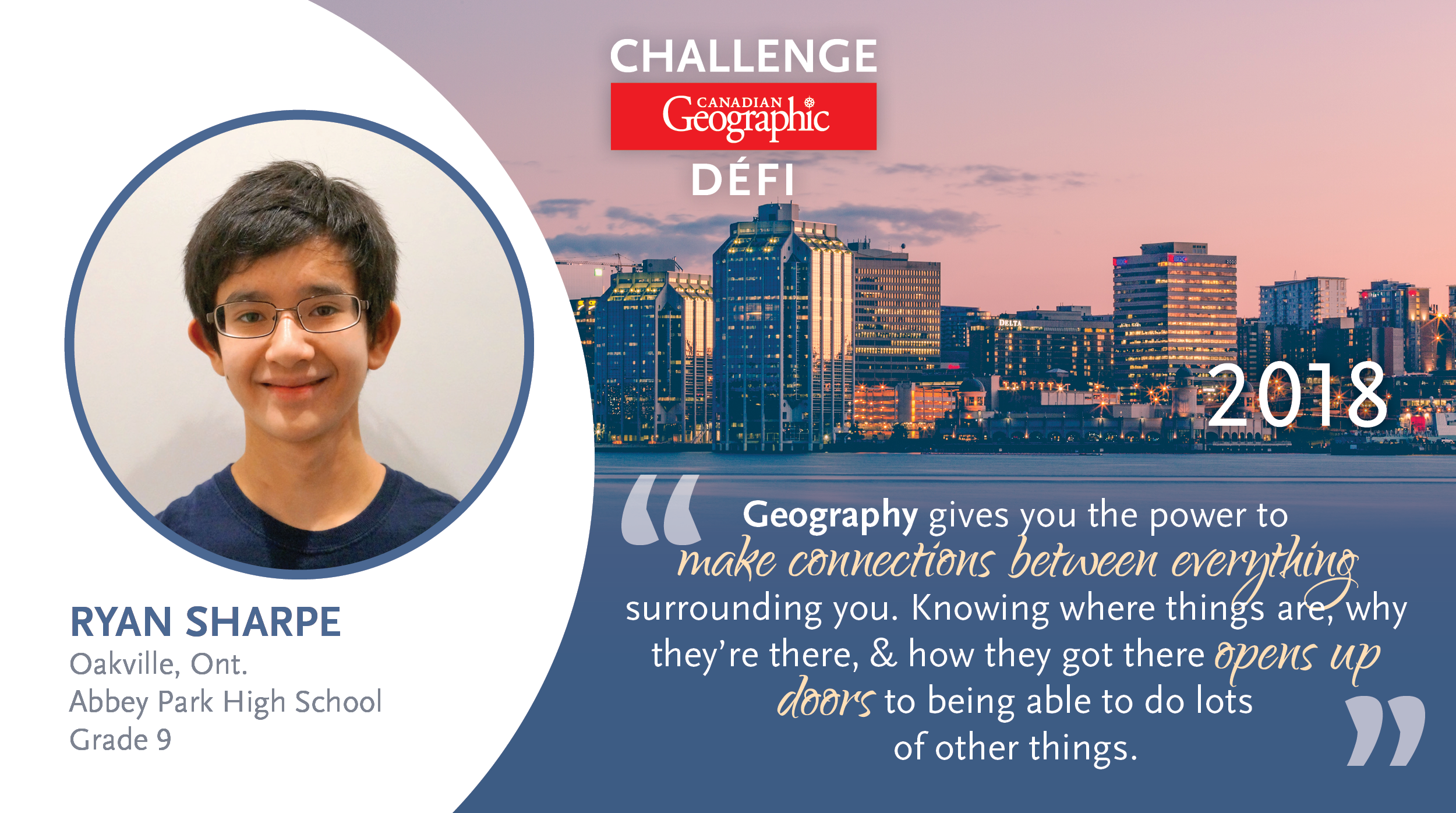 Ryan spends his free time outdoors. He enjoys biking, participates in Scouts, and does whitewater kayaking. His favourite subjects in school are math, science and engineering. Ryan is interested in a career in hydraulic engineering or architecture. 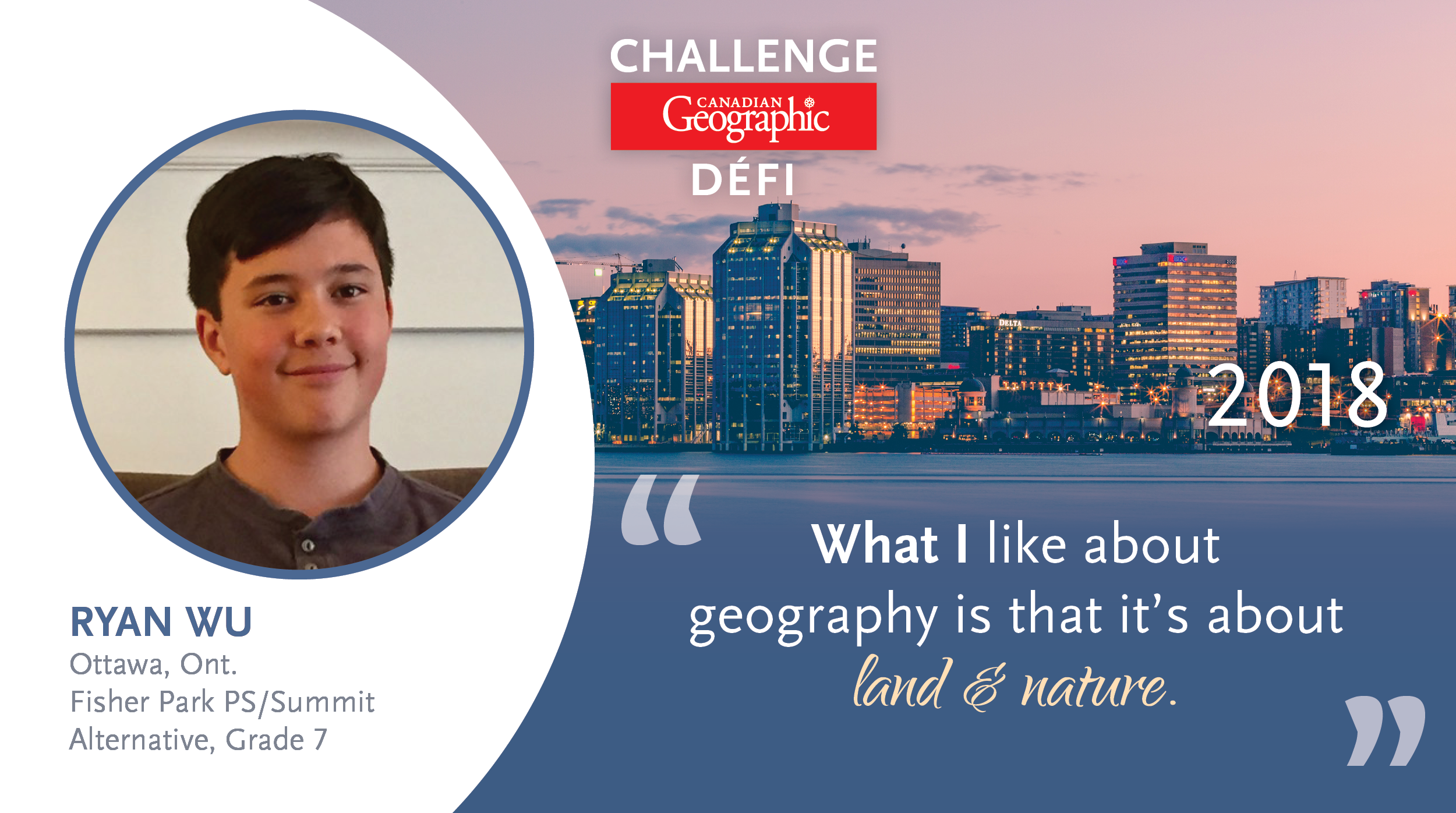 Spencer volunteers as a swim instructor for children with special needs. He is a co-chair of his school’s Youth in Philanthropy club, sits on the student council, is a member of BBYO Jewish youth organization, and does cross-country running. 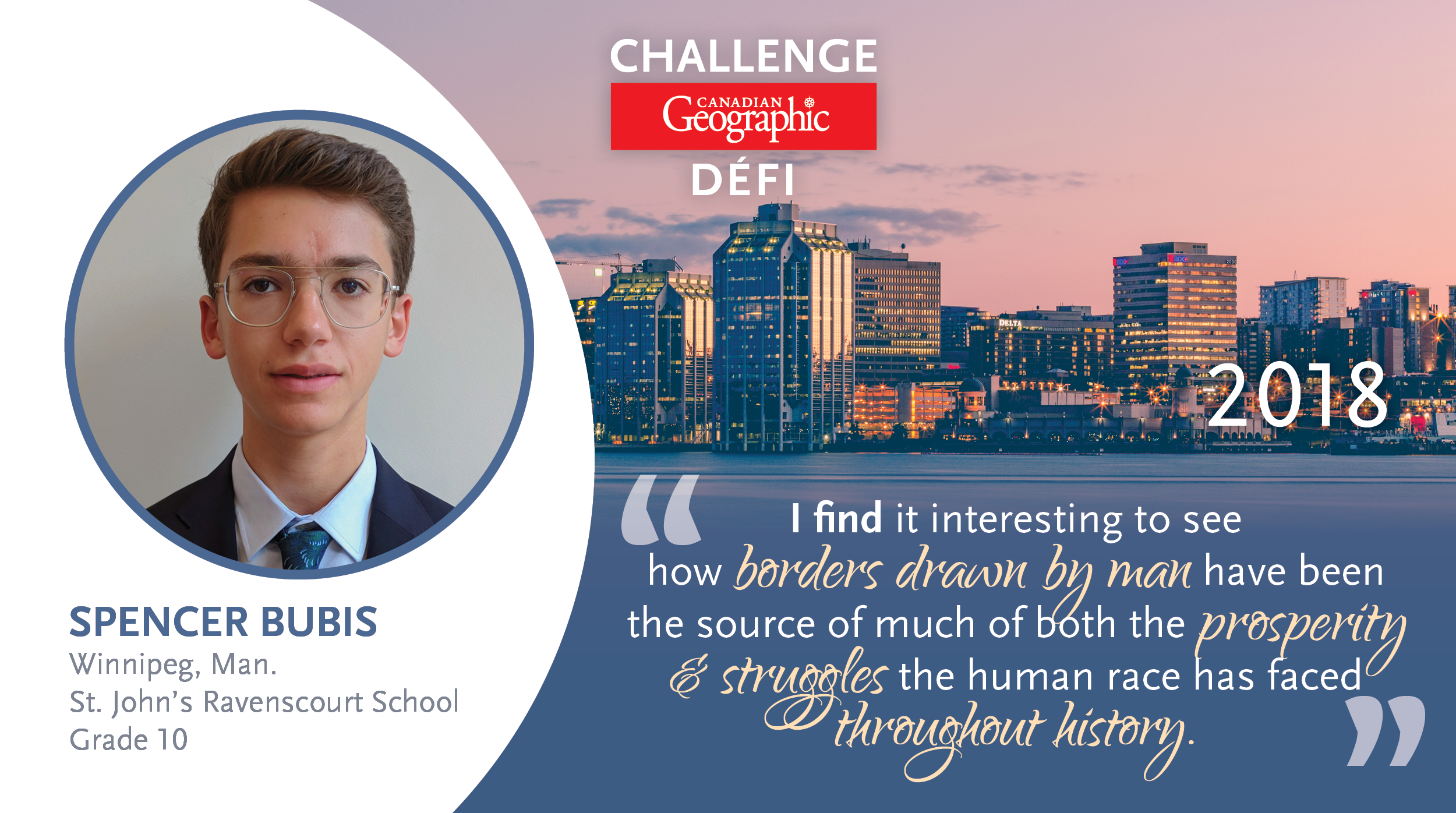 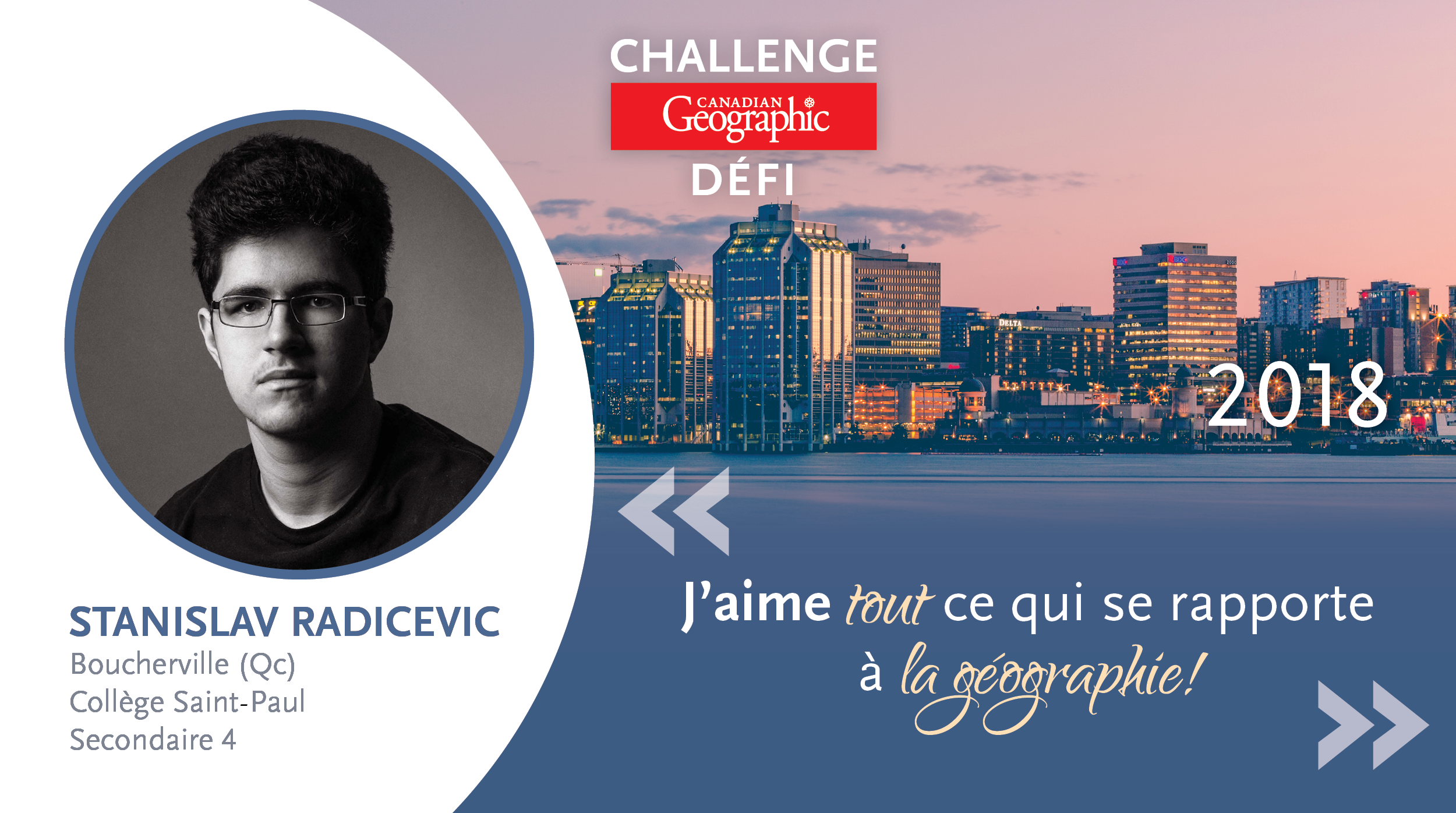 Tawfeeq participates in the school council and debate club. He enjoys computer programming and wants to become either an engineer or a programmer. For Tawfeeq, faith is important and he considers the prophet Muhammad his role model. 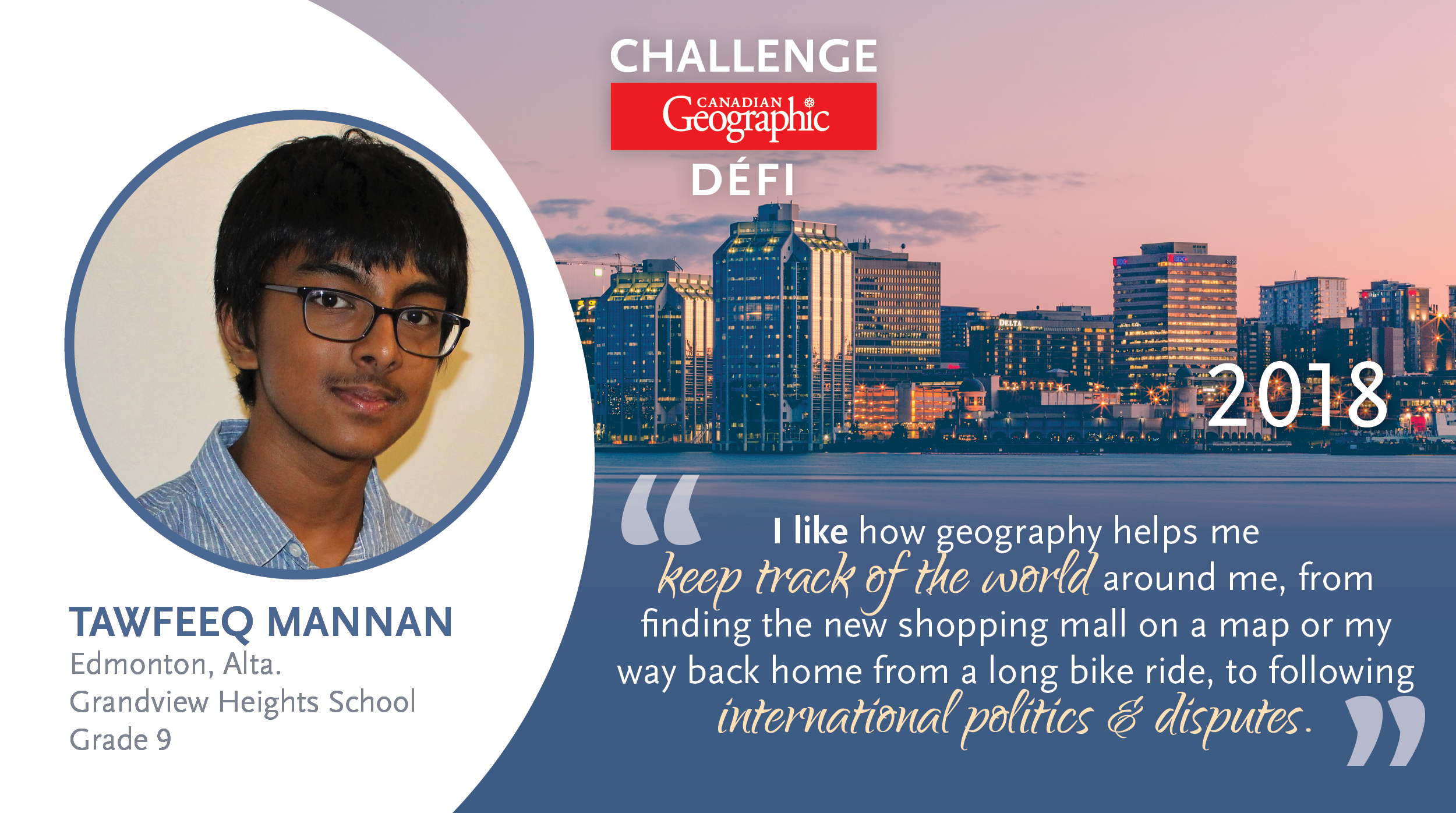 Tony loves reading, exploring the outdoors, and spending time with family and friends. He plays piano, takes swimmming and martial arts classes, and enjoys coding and robotics. Tony wants to become a lawyer or a mechanical engineer. 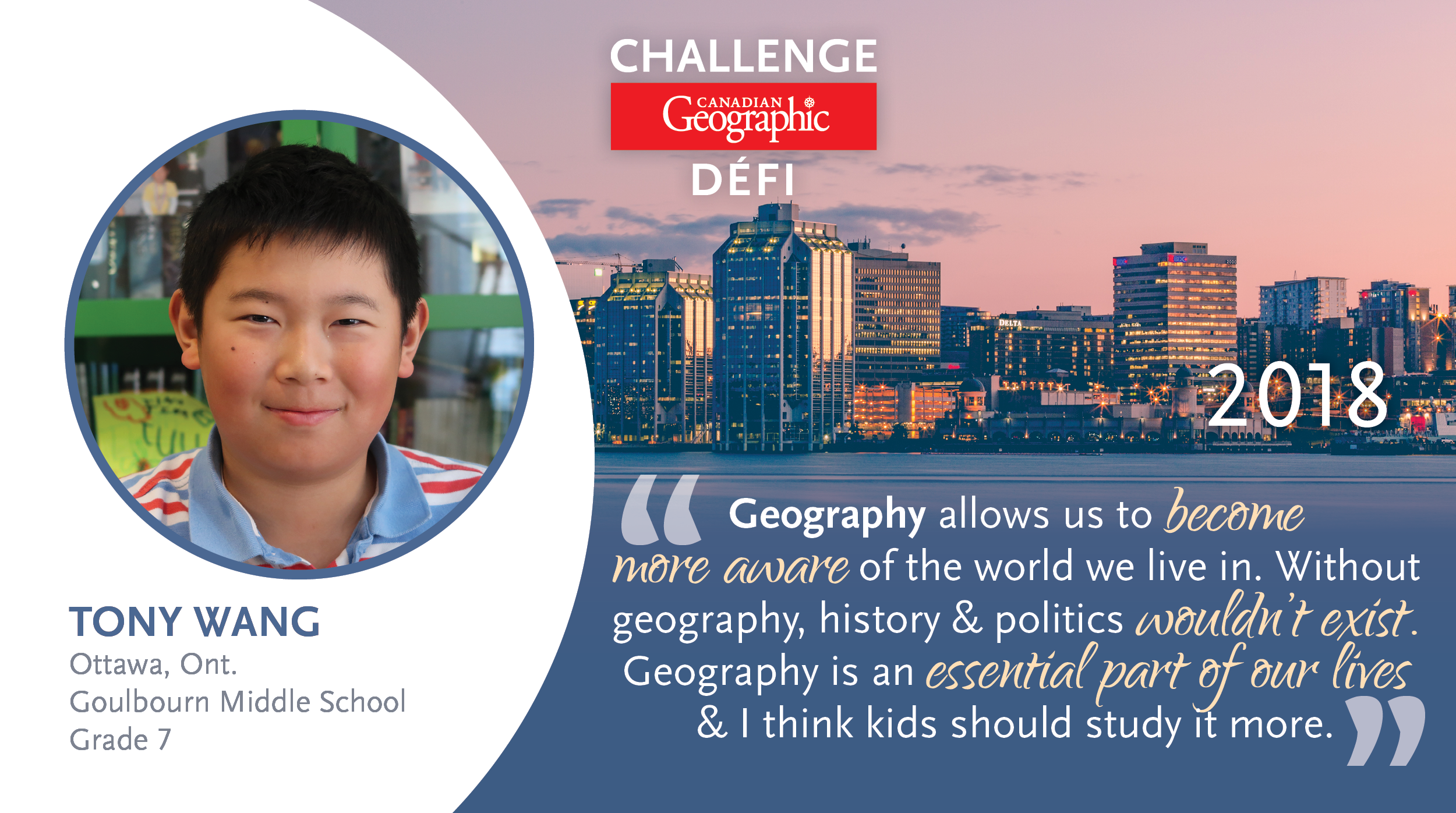 In his spare time, William enjoys sailing, gaming and music. He plays the bagpipes and is learning German. William admires explorer and cartographer David Thompson and considers him one of the greatest land geographers who ever lived. This is William’s third national final! 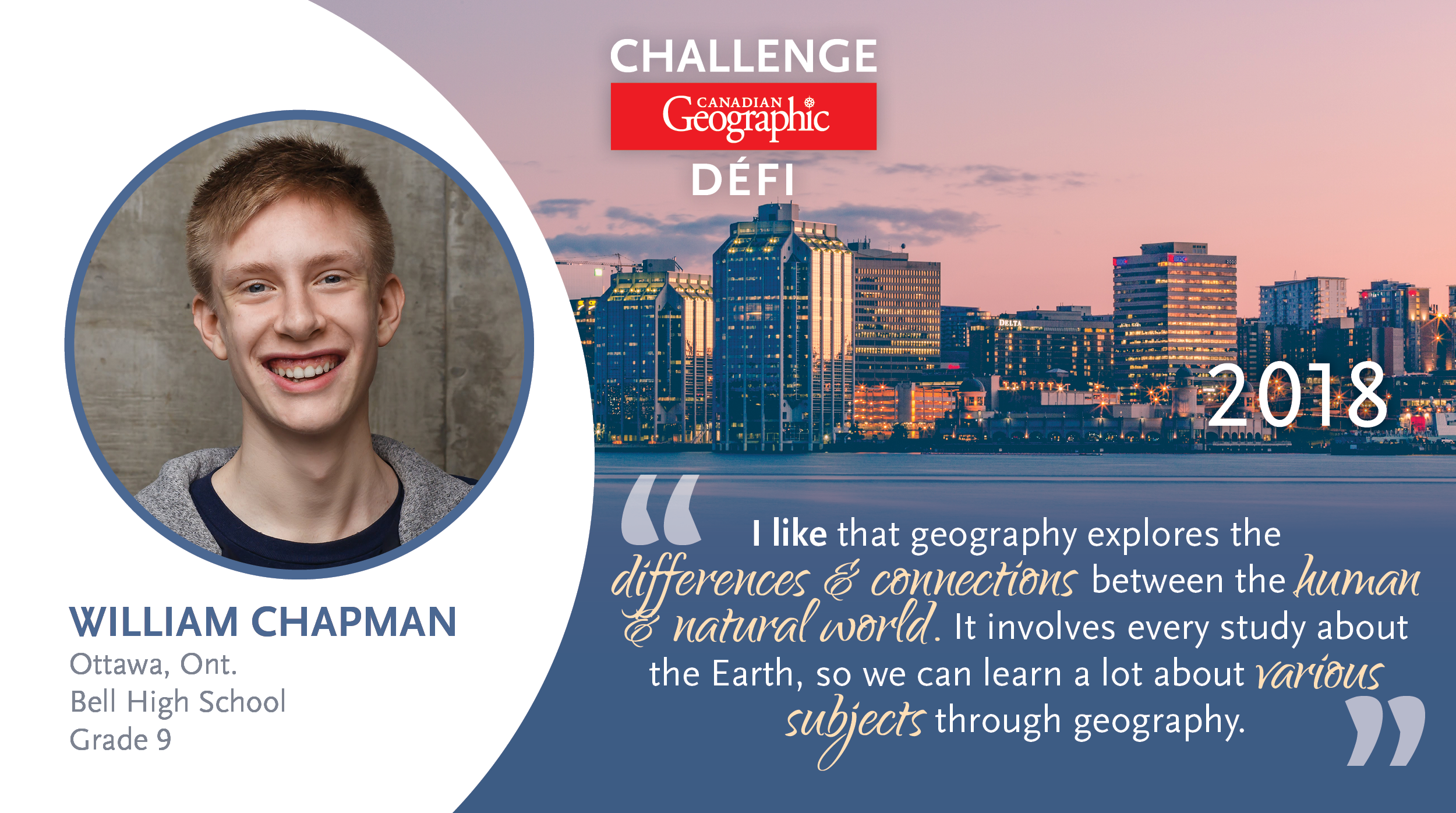 William enjoys reading, watching sports on TV, and playing video games. His favorites subjects are math and geography, and he is active in his school's math club and runs a cartography club. 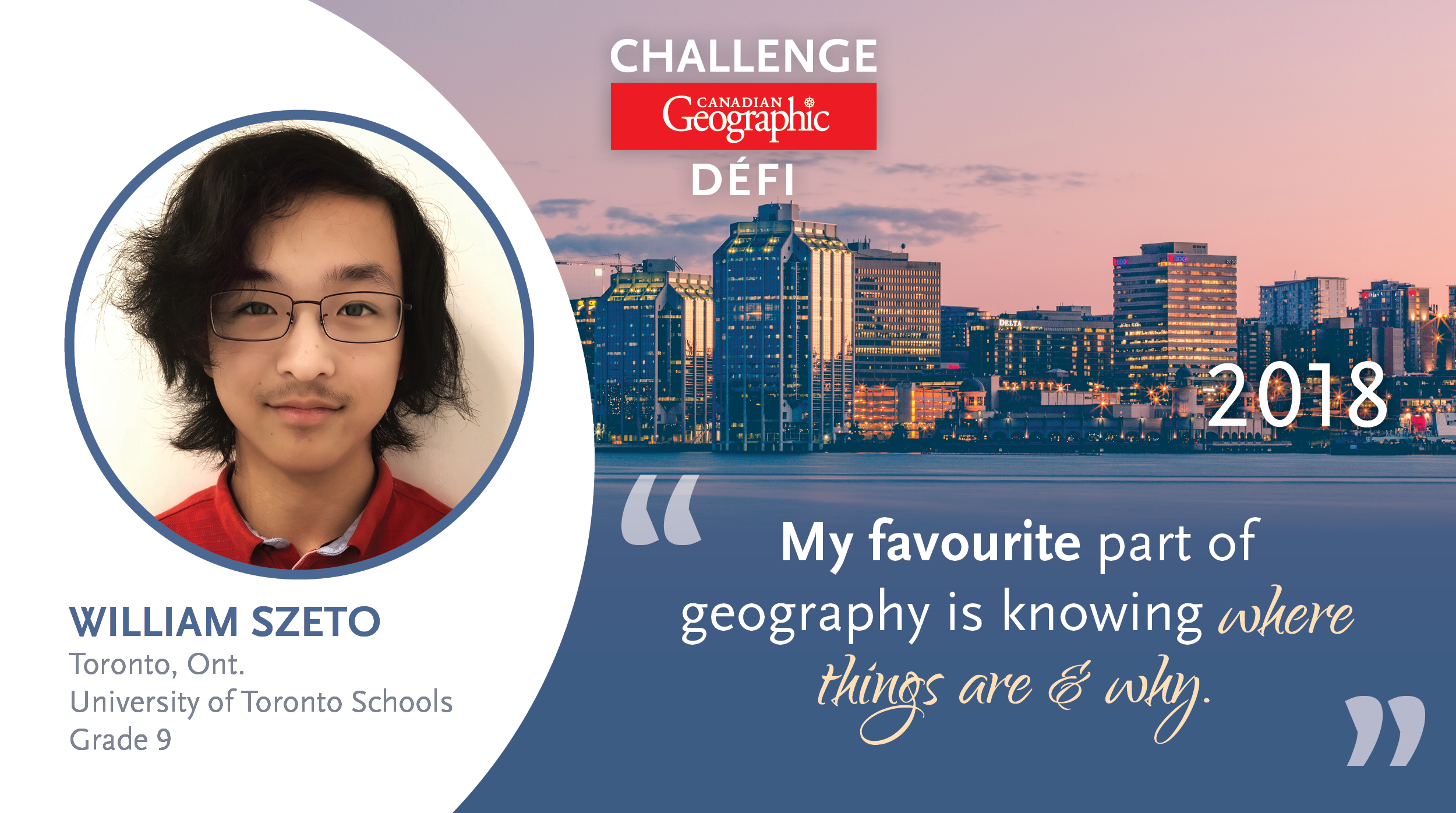