On a grey morning in St. John’s, April 12, 1980, Terry Fox stooped to fill a jug with Atlantic water — to pour into the Pacific at the end of his journey — touched the pebbles in the surf, spoke to some local reporters and started running. Few attended the start of the 21-year-old’s Marathon of Hope.

He rose before dawn each day to face another 42 kilo­metres, as well as pounding spring storms in Newfoundland, scorching heat in Ontario and, although he didn’t know it yet, the return of the osteosarcoma that had taken his right leg. But his resolve to reach his geographic goal drove him, as did his fundraising goal of $1 million (and later $24 million, or $1 from each Canadian at the time) to further cancer research and his need to prove that cancer victims do not lose an ounce of their humanity and need not give in to despair.

Fox received little or no reception in many communities but was buoyed along wherever locals did come to cheer him on and donate to his cause. Of course, the athlete and activist from Port Coquitlam, B.C., was forced off his route in Thunder Bay, Ont., on day 143. His cancer had spread to his lungs, and he died just months later, on June 28, 1981.

Communities, businesses and individuals donated $1.7 million while Fox was running. A national CTV telethon
in his honour a week after his marathon ended brought in $10.5 million. Since then, annual Terry Fox runs and other Terry Fox Foundation initiatives across Canada and around the world have raised almost $800 million for cancer research.

Well before he took those first strides in St. John’s, Fox had told a friend that he aimed to run the length of Canada and, in a sense, he did (see inset map, top right). Few national symbols have proven as potent, unifying or enduring as the optimistic young Fox outrunning cancer for 5,373 kilometres.

See the map and text below for a timeline of his legendary run. 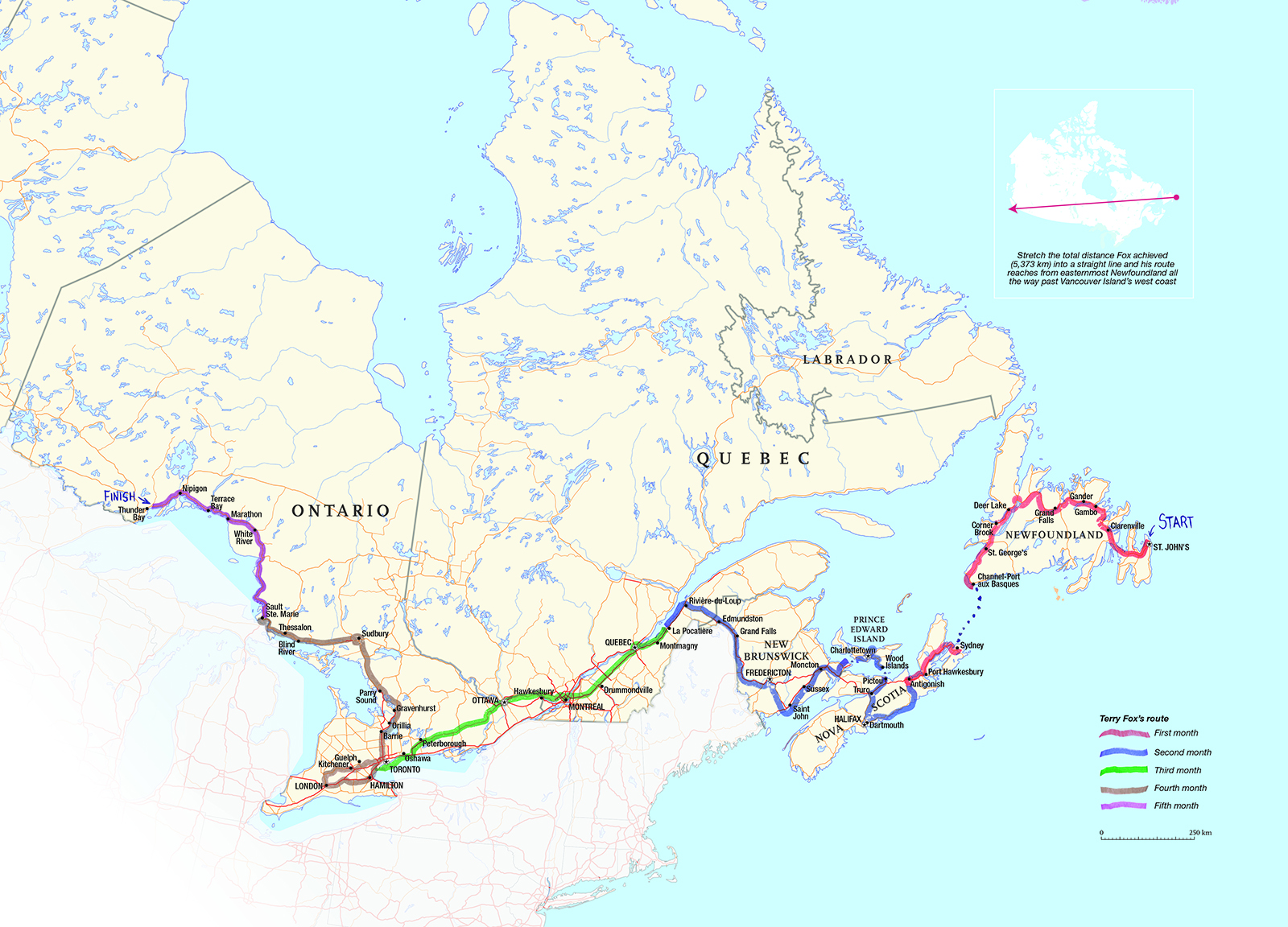 Terry Fox’s 1980 Marathon of Hope, with the months of his journey highlighted in different colours. (Map: Chris Brackley/Canadian Geographic)

Terry Fox embarks on his Marathon of Hope. Despite the freezing weather, he insists on wearing shorts as he runs so his artificial leg is clearly visible.

On his way to Gander, locals in Gambo line up and press money into Fox’s hands as he passes. “That’s when I knew that the run had unlimited potential,” he writes.

Fox is presented with $10,000: $1 raised for each person in the ferry terminal town.

Fox runs to a vocational school with about 50 students who have worked to raise $3,000 for his cause.

People throng to greet Fox in Charlottetown, which energizes him after a run defined by dizzy spells and freezing temperatures.

A lack of publicity in New Brunswick means Saint John has no event planned.  At the last moment, the mayor gets a radio station and local paper behind Fox and locals start turning out.

In his diary, Fox relays his frustration about being honked at frequently and even forced off the road by motorists unaware of his marathon.

As he arrives in the provincial capital, Fox is already featured on the cover of the French newspaper Le Soleil.

As he crosses the Ottawa River into Hawkesbury, a crowd of thousands, a marching band and balloons usher Fox into Ontario. Provincial police begin providing an escort.

Fox uses his good leg to kick the opening ball for a CFL exhibition game between Ottawa and Saskatchewan, receiving a standing ovation from the crowd of 16,000.

Fox celebrates his birthday with 2,000 people at the town’s civic centre, where he is given $14,000 and a new artificial limb.

Hockey legend Bobby Orr presents a $25,000 cheque to Fox, who calls the encounter his journey highlight.

Halfway between Sault Ste. Marie and Wawa, Fox has to run up the brutal three-kilometre-long Montreal River Hill.

After suffering a painful coughing fit just east of the city, Fox runs on for several kilometres before asking to go to a hospital. The next day, he holds a press conference to announce that his cancer has returned and he can run no further.

Stretch the total distance Fox achieved (5,373 kilometres) into a straight line and his route reaches from easternmost Newfoundland all the way past Vancouver Island’s west coast.