The man who saved the Kinsol Trestle | Canadian Geographic

The man who saved the Kinsol Trestle

Master carpenter Gordon Macdonald on restoring an iconic B.C. bridge, the value of heritage infrastructure, and why he's set his sights on the Antarctic
By Suzanne Morphet
January 2, 2018

The historic Kinsol Trestle in the Cowichan Valley on Vancouver Island is one of the largest wooden bridges in the world. Completed in 1920 as part of the Canadian Northern Pacific Railway and abandoned in 1979, the bridge appeared destined to be torn down.

In 2006, the regional government announced it would demolish the structure and replace it with an imitation bridge made of pressure-treated wood in order to close the gap in the Cowichan Valley Trail — now part of the Great Trail — so pedestrians, cyclists and equestrians wouldn’t have to make an eight and a half-kilometre detour around the Koksilah River. That’s when Gordon Macdonald stepped in.

Macdonald, CEO of Macdonald & Lawrence Timber Framing in Mill Bay, B.C., helped convince the government that the bridge could — and should — be saved. The process took about two and a half years and involved replacing unsound timbers and rebuilding 17 structural piers, but the bridge reopened in 2011 and is today a spectacular and popular feature of the trail.

Here, Macdonald discusses his efforts to save the iconic trestle, his recent work in Antarctica, and the value of heritage structures.

You were working in Britain while much of the early discussion over the fate of Kinsol Trestle was happening. Is it possible you returned to the Cowichan Valley just in the nick of time in terms of saving the trestle?

The timing was just right. During the previous decade the bridge had been inspected and studied many times, but always from the perspective of replacing the rotted elements rather than repairing them. I returned from the U.K. where I had been repairing timber buildings, many of them in worse shape than the Kinsol, and I was able to bring a fresh perspective to the team.

You were fortunate to be able to work with Ralph Morris, CN Rail’s Senior Engineer and the person responsible for the Kinsol Trestle for more than 30 years. What was that like?

Of the more than 4,000 bridges that Ralph was responsible for in his Western and Mountain Division work, the Kinsol had always been a favourite. When Ralph retired from CN, he held on to all of the early notes, drawings and details related to Kinsol as a keepsake. He knew that these old files would be of no interest to CN once the bridge was decommissioned, so he presented them to the Cowichan Valley Museum and Archive, where they had been sitting largely unexplored ever since.

With the enthusiastic support of curator Kathryn Gagnon, Ralph and I went through the old files together looking for information relevant to our project, and it was an absolute gold mine. Ralph and I became good friends, and he gave me huge confidence in proceeding with the repairs. Without his pragmatism and common sense, I doubt I would have had the courage to take on the project.

Watching Ralph take such pride in the repairs, and seeing his trestle come together was one of the most rewarding aspects of the project for me. Sadly, Ralph died before the project was complete, so we held a private service in his memory at sunrise on the morning of the official opening. I like to think that Ralph was the first to cross the bridge that morning.

Today there’s much more emphasis on worker safety than there would have been when the Kinsol Trestle was built. Did you hear any horror stories about how the trestle was built or maintained?

The bridgemen, as they were known, were pretty savvy when it came to keeping safe on these big structures, and they had well-practiced ways of going about each task. They were specialists who knew their trade and their own limitations. That said, one of the old gentlemen that I interviewed as part of the project described travelling out onto the Kinsol (un-roped of course) with a replacement brace over his shoulder, and his tools on his belt, while brushing the fresh snow off the timbers with his boot as he went along 80 feet above the river.

Our team worked more than 31,000 person-hours in the period leading up to the trestle's opening day, and right through two winters. During that time we missed only one day of work when there was simply too much snow to reach the worksite. Despite all the different tasks and precarious positions that we endured as part of the project, we only had two minor injuries: a broken nose and a broken pinkie. I’m really proud of how hard our team worked to make the job safe, and how they all looked out for one another like a family.

Someone hiking or cycling a trail that was once a rail bed, and crossing trestles such as the Kinsol, wouldn’t necessarily appreciate the time and money that went into their original construction. How lucky are we to have this infrastructure in the Cowichan Valley?

We tend to think about these big trestles in terms of their timber structures only, but there’s also a lot of work associated with the foundations and approaches. For example, the whole north slope of Kinsol consists of blasted rock that came from the cut which the trail now runs through. From a heritage perspective, this greater landscape of the Kinsol, including its relationships to other bridges and its connectivity with Victoria is all very important. The opportunity to incorporate this important piece of our national history in the Trans-Canada Trail is wonderful. 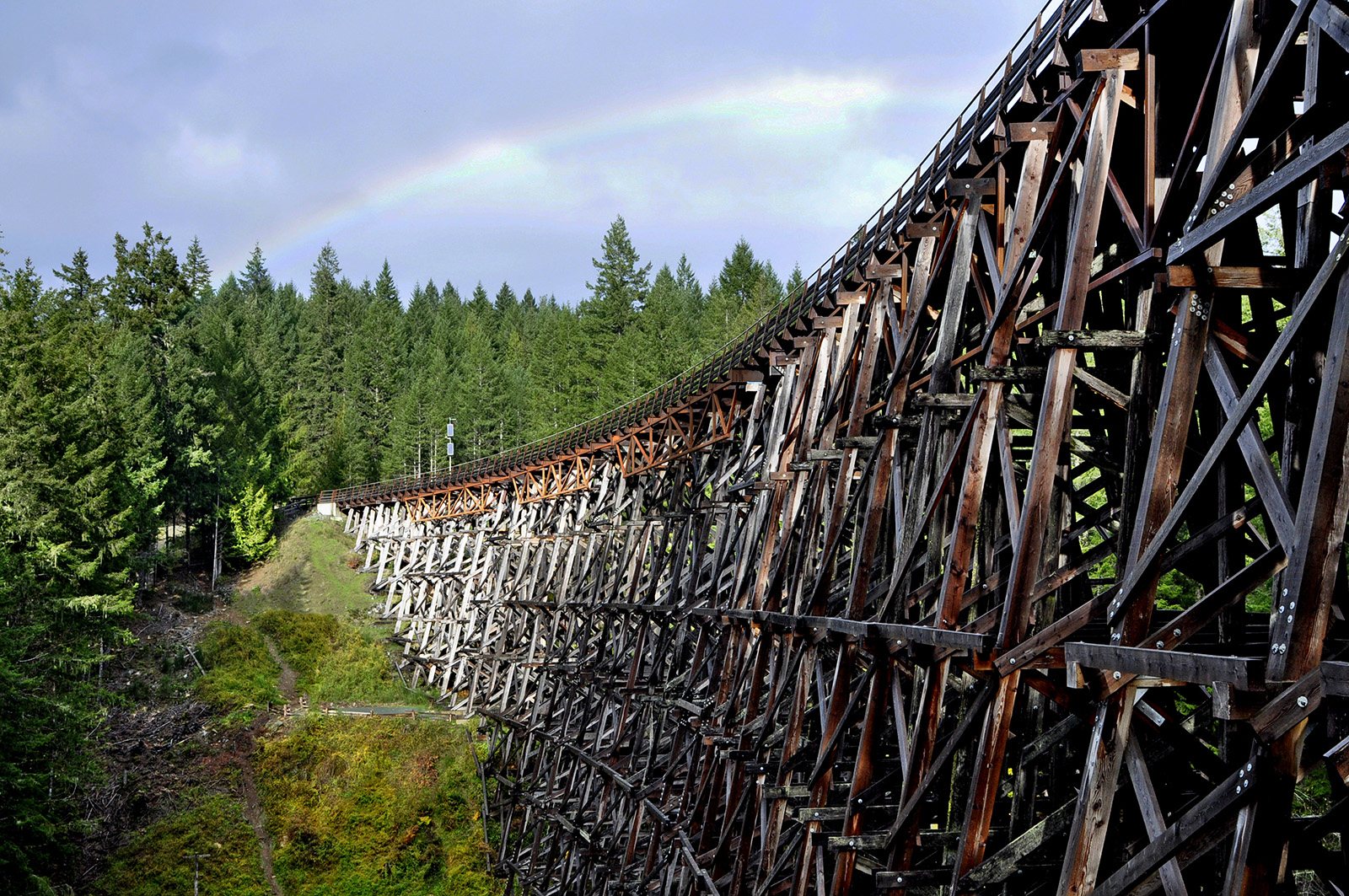 In addition to being the CEO of Macdonald and Lawrence, you have another company, Heritageworks, that specializes in conserving historic timber buildings all over the world. You’ve worked on medieval castles in Europe and you’ve recreated a 30-tonne Roman war machine for the BBC. Do you have any favourite projects?

I’ve had the privilege of working on some wonderful projects over the years, and with a great variety of interesting and talented people. My work has taken me to six continents so far (including Antarctica), but working here in B.C. is still my favourite. Our province is just so rich in stories and history. I’m currently working with the Mowachaht/Muchalaht First Nation and Parks Canada at Yuquot on the west coast of Vancouver Island. This is a place that has been gradually and continuously shaped by human habitation for over 4,000 years. To put this into some sort of global perspective, the central ring of Stonehenge was erected during this same period. Just imagine what it would be like to walk across a world heritage site like Stonehenge, while having a conversation with one of the direct descendants of the people who built it more than 4,000 years ago; that’s the sort of thing I enjoy thinking about when I’m chatting with the Williams family out at Yuquot.

You’re doing a PhD in Archaeology and Ancient History at the University of Leicester. Not many carpenters — even master carpenters — pursue PhDs. What’s your motivation?
My thesis examines the impacts of global climate change on polar heritage, and how these changes are forcing us to reconsider the ways that we investigate and record historic landscapes. Canada has an important role to play in the stewardship of the Arctic, and I hope that my research can contribute in some small part to these greater policy discussions.

Tell us more about your work in Antarctica. How did you get involved with the Antarctic Heritage Trust, what’s your role, and what’s the next phase of that project?

For the past 14 years I’ve been working with the New Zealand-based Antarctic Heritage Trust to conserve the expedition huts of the early explorers Scott, Shackleton and Borchgrevink. I lead the building conservation effort at these huts, while my colleagues in New Zealand head up the artefact conservation work and make the whole project possible. The Trust is responsible for the care and maintenance of four historic buildings and a number of related monuments that date from the so-called ‘Heroic Age of Antarctic Exploration,’ when Victorian and Edwardian adventurers tried to attain the South Pole.  More recently, we’ve been working with an important piece of 20th century history: the original hut of Sir Edmund Hillary, who led the New Zealand contingent of the Trans-Antarctic Expedition. When I was a kid I had a photo above my bed of Hillary and Tenzing Norgay, both of them grinning and looking very pleased with themselves after their successful climb of Mount Everest. You can probably imagine how thrilling it was for me to meet Sir Ed in Antarctica, and share a mug of tea with my childhood hero.