A mammoth journey: how scientists traced a mammoth’s migration

Around 17,100 years ago, a male woolly mammoth traced a steady path north of the Brooks Range of mountains in northern Alaska. It was an area he had frequented in the last two years of his life, hundreds of kilometers from where he had spent much of his time as a juvenile, or as a younger adult. By the end of his approximately 28 years of age, this mammoth had travelled 70,000 kilometres — equivalent to almost circling the earth twice.

This mammoth’s story is one that was told through the strontium isotopes that accumulated in its tusks over its lifetime — chemical tracers that allowed an international team of scientists to work out where this particular mammoth had travelled over the land.

“This is the closest you can get to constructing the life of an extinct animal,” says Clément Bataille, a professor of earth and environmental science at the University of Ottawa, who co-authored the new research.

Bataille is a specialist in the field of strontium isotopes. Isotopes are versions of the same element, with differing numbers of neutrons. There are four different isotopes of strontium that occur naturally — and the ratio between these differs according to the geology of the land. As this mammoth feasted on the plants in different geologies, these isotope mixtures entered its bloodstream and were incorporated into its tusks, year on year — a bit like tree rings.

“Except the tusk will look more like a bunch of stacked ice cream cones,” says Bataille. 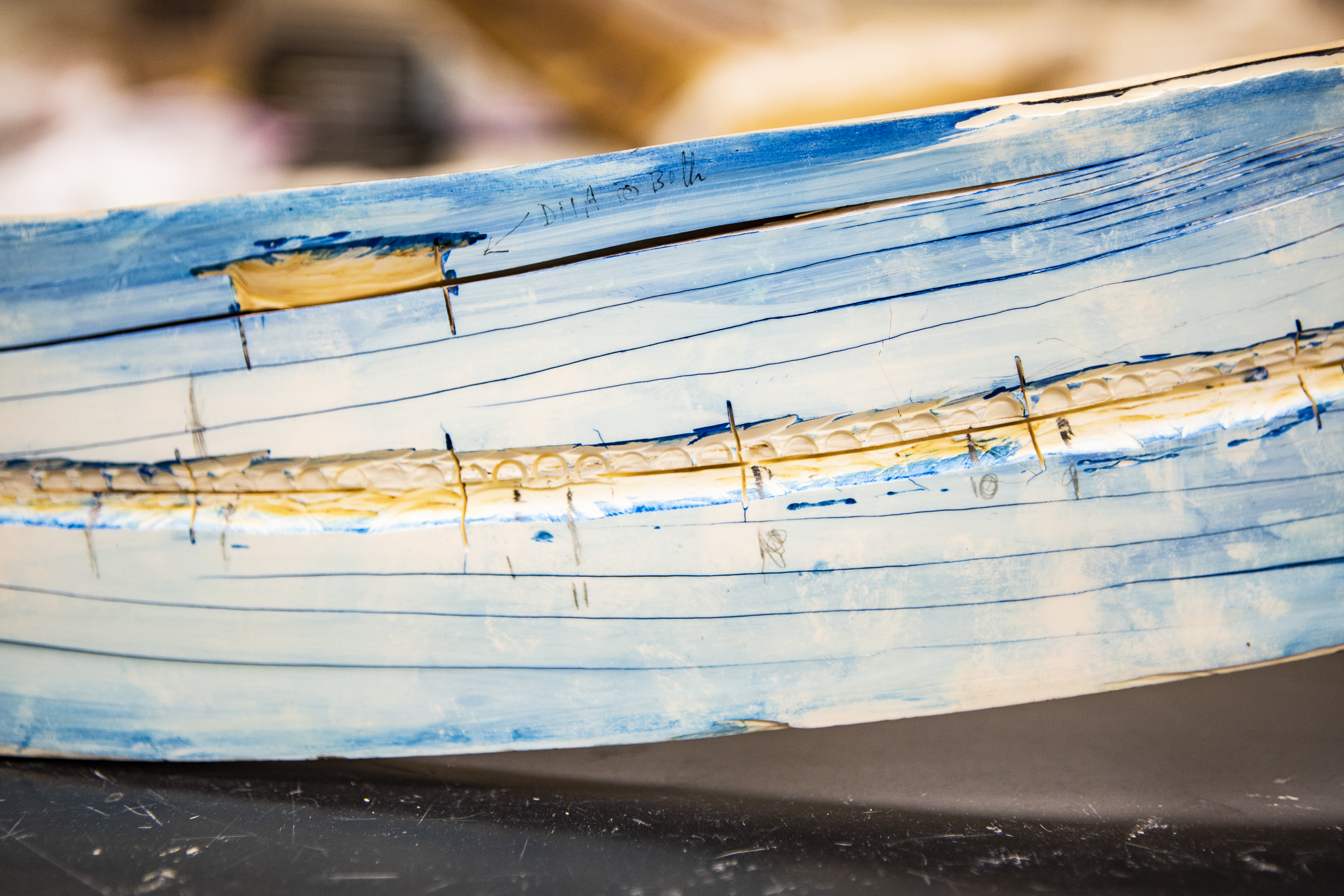 A cross-section detail of the mammoth's tusk, with blue stain revealing growth lines. Samples were taken along the tusk using lasers and other techniques, allowing isotope analysis that provided a record of the mammoth’s life (Photo: JR Ancheta, University of Alaska Fairbanks).

The tip of the tusk is the oldest part, and the base is the youngest. The team split the tusk into two and used a special instrument to analyse the isotope ratios in the tusk — they focused on strontium, but also looked at oxygen, carbon and nitrogen.

Once they had analysed the isotope ratio, they could figure out where the mammoth had travelled on the landscape.

“What's really nice is that the geology of the (Alaska) region is extremely complex, one of the most complex geologies that exists in the world,” says Bataille. The complexity is good, he says, because there’s different types of rock all over the place, with different isotope ratios, making it more obvious where the mammoth travelled. “The mammoth is really moving on the landscape, the changing geology, very, very rapidly.”

The scientists constructed millions of possible walk routes, and found that only a few could have possibly fitted with the isotopes.

As a juvenile, the mammoth moved a bit less when he was with his maternal herd. Then, at 15 to 17 years of age, the mammoth was kicked out of his maternal herd and moved much more on the landscape. “He would just take off and do a lot of kilometres, like 500 or 600 kilometres in two months, going to very different areas,” says Bataille. It was hypothesized that when the mammoth became sexually mature, he travelled much further between maternal herds.

“The long distance movement might reflect also a resource need, and resource use,” says Bataille, “because the Arctic is a place with really harsh landscapes and with limited resources on the tundra. So maybe at some point, some areas become drier, or the climate is not as good in some regions — and so the mammoth just takes off.” 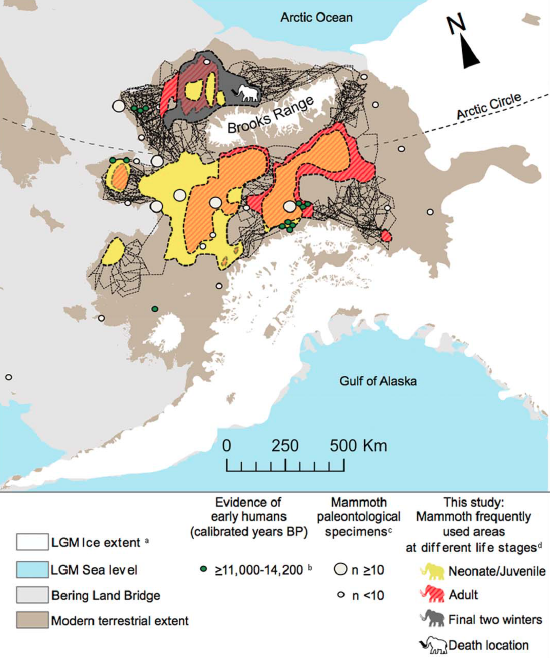 Interestingly, the mammoth’s core areas of use are mirrored today in the current migration patterns of caribou, which suggests that these areas have been used by herbivores for many millennia. It’s also interesting that the areas this mammoth frequented most often are the sites where many other mammal remains were found, in addition to some of the earliest sites of human civilization in Alaska.

“At the very end of his life, at one point he moves up north, says Bataille, “and he had moved up north a few times before that —  north of the North Slope, in particular. But usually he just stayed there a little bit and then came back the next year. In this case he goes up and stays there for about two years. And what we saw is that he just moved a little less.”

The scientists saw in the isotopes of the tusk that there was a sharp increase in his nitrogen isotope as he approached the high valleys. “This is a very strong signal for starvation,” says Bataille.

The team are currently working on a similar study using the tusks of a female mammoth from around 2,000 years after their male died.