Learning to surf in Santa Monica

Bordered by Venice Beach and other L.A. neighbourhoods, oceanside Santa Monica is compact, innovative and laidback-chic. It’s also the best place to learn to surf in the region.
By Nick Walker
August 23, 2017

Saltwater is flying as my new friend, Karen from Toronto, shakes her surfboard in my direction and shouts over the sound of breaking waves: “I’m so cold, but this is so much fun!” I choke out an exhilarated agreement, still finding my breath, point my own board into the breeze and we run back at the Santa Monica surge to try this yet again. 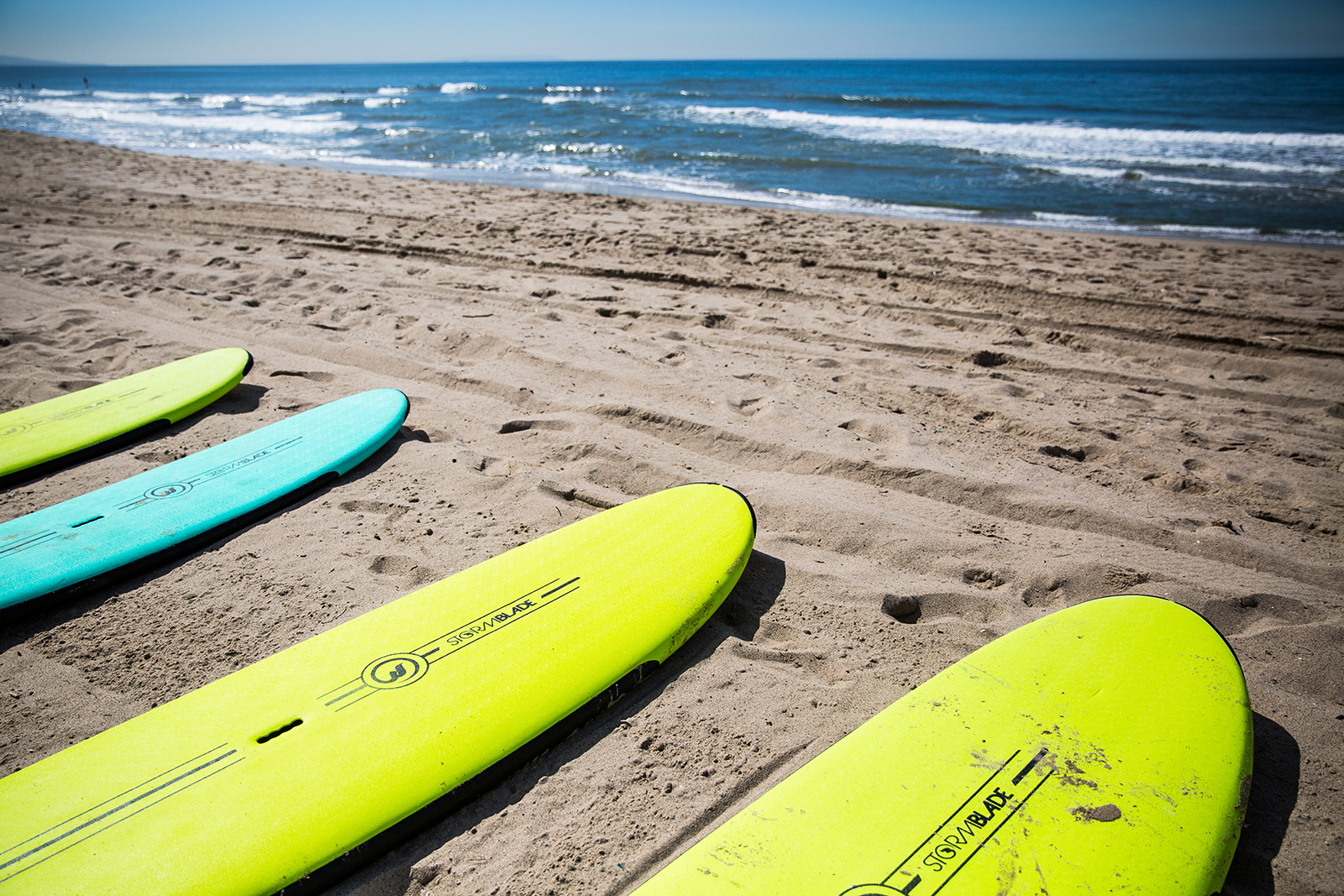 Over the last two days I’ve cycled quirky Venice Beach, stopping to gawk at Canadian postmodernist Frank Gehry’s weird, bright purple “Norton House” and the exhibitionist bodybuilders and gymnasts at Muscle Beach. I’ve conquered the Santa Monica Pier, with its 1920s-built carousel and rainbow amusement park, margarita-slinging Mariasol Mexican restaurant and kitsch vendors, who for $20 will sell you a Route 66 “End of the Trail” sign or a mid-century-style Santa Monica poster. I got an ice cream cone and gave $10 to a drummer wailing away to — and not at all ruining — “(Sittin’ On) The Dock of the Bay.”

And if one is going to learn to surf in the Los Angeles area, the perfect place to start is Santa Monica Beach, where an endless supply of waves rolls in between the pier and the Venice Breakwater to the south, all part of the long strip where not just L.A. surf culture, but, many would argue, beach culture itself was born. The swell here is consistent and generally mellow, and while these beach-break waves don’t always provide the “face” that seasoned surfers like to play on, they’re plenty big enough for riders like me.

That’s what brings me to the sand in front of stilt-legged Lifeguard Tower 18 before the start of a group lesson with Learn to Surf LA, where I small-talk with Karen and a few first-timers about our collective lack of experience on most kinds of boards and the probable coldness of the Pacific Ocean in early March. Even so, it’s a sunny 25 C day, and Santa Monica Beach is clean and somehow all but empty. Translate those conditions to sandy shores in any of Canada’s seaside cities, and you’d have to mark your territory. 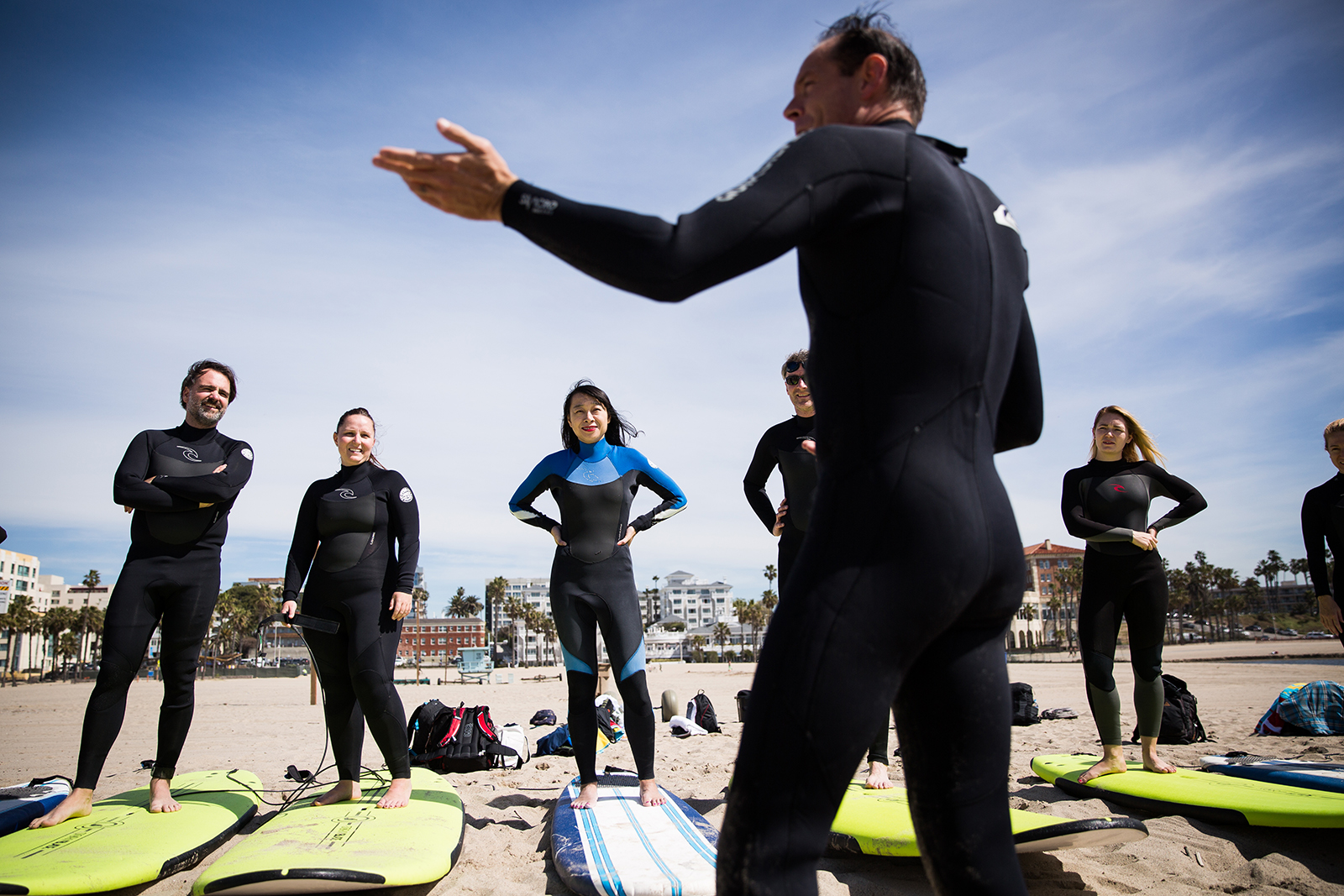 We squint across our private beach to see our neoprene-clad, smiling instructors hauling a sort of big-wheeled wagon stacked high with boards and bins full of wetsuits. They introduce themselves as Chris Tennberg, Oscar Galvan and Joey Jennings, a trio of perhaps unsurprisingly laid-back California types who seem genuinely pleased to join us out here under the sun. The Learn to Surf school they say, when I ask about volume, has turned out thousands of new surfers since it was founded in 2002, here in Santa Monica Bay but also on Malibu, Manhattan and Zuma beaches and in L.A. proper.

As I squeak into my suit, tugging at folds and crevices where things can’t possibly be supposed to fit this way, I realize our coaches, who share decades of experience on the waves in California, Hawaii and far beyond, are as at home in their wetsuits as I am an alien in mine. I am eastern Ontario exposed. 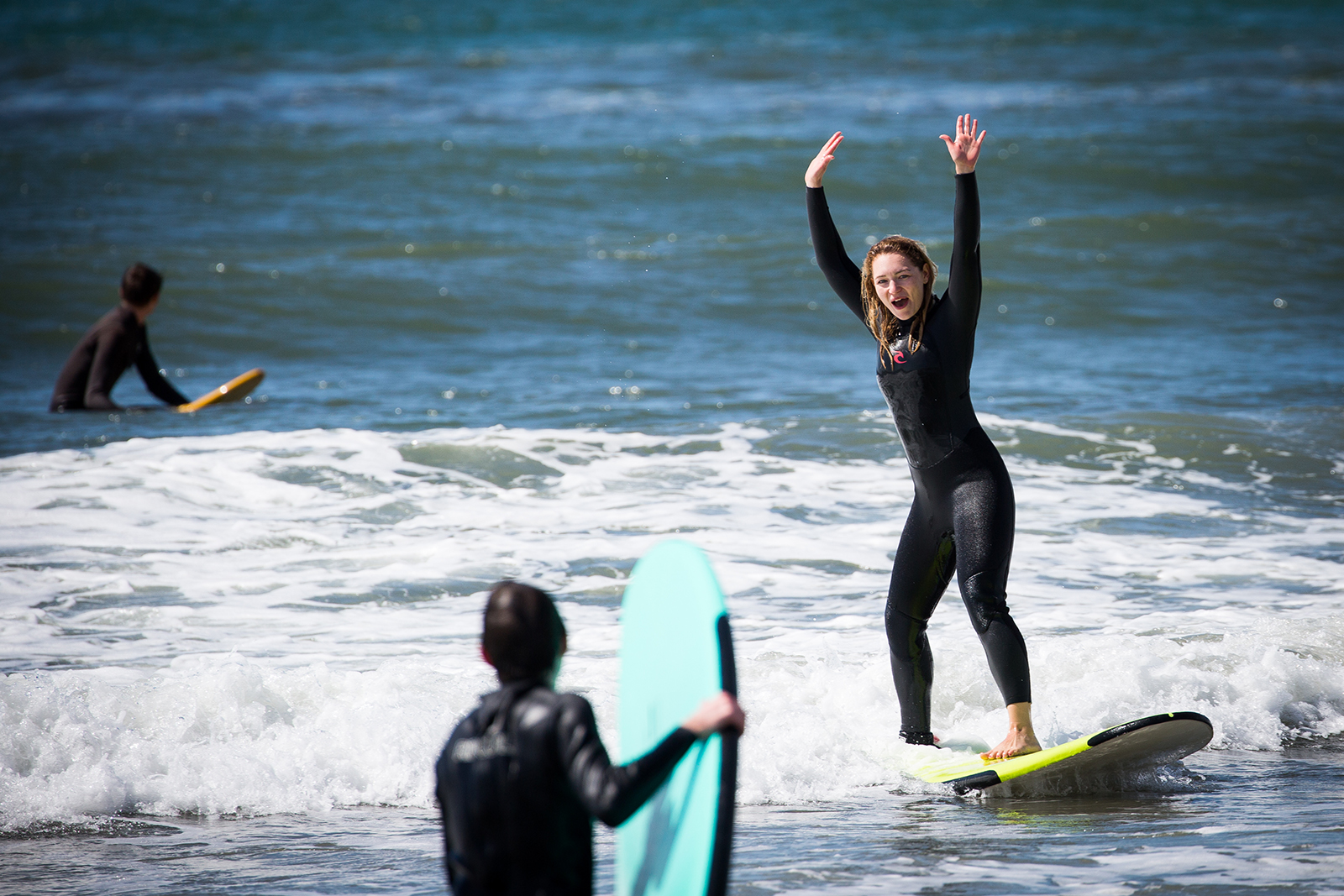 For the first part of the lesson, we repeatedly practice “popping up” up from prone paddling to posing like we’re riding big waves, except our boards are on the sand. As I push up off my hands and swing my lead foot through it feels easy, natural, like nothing can stop me when we’re finally allowed in the water.

I am wrong, of course. Physics and the unfamiliar win again and again. When the surge starts launching me toward shore and I attempt to pop up (but too late and too far forward), the board noses under and I tumble head-first. Or I anticlimactically roll off the side when my hand slips off. The water is 14 C — even with a wetsuit on, chilly enough to induce gasps when the first few waves break around my head. Within minutes, though, all that paddling and chugging back into the waves has warmed up everything but my feet, which I can’t really feel now in any case.

Jennings watches my struggles and reminds me to look to the beach instead of the board. He sees me pop up to one knee and make it only that far before either skimming up to the sand or disappearing into the surf. A couple of times he helps me work out the timing by sitting nearby on his board, both of us turned sideways to ride out the punier swells until a perfect white cap approaches. When it does we turn to face land, and he tells me to paddle hard and then “Pop up!” The second time we do this, I manage to stick the landing and glide into shore for a few blissful seconds. “There it is,” says Jennings as he paddles away to aid someone else. “I knew we’d get you surfing.” 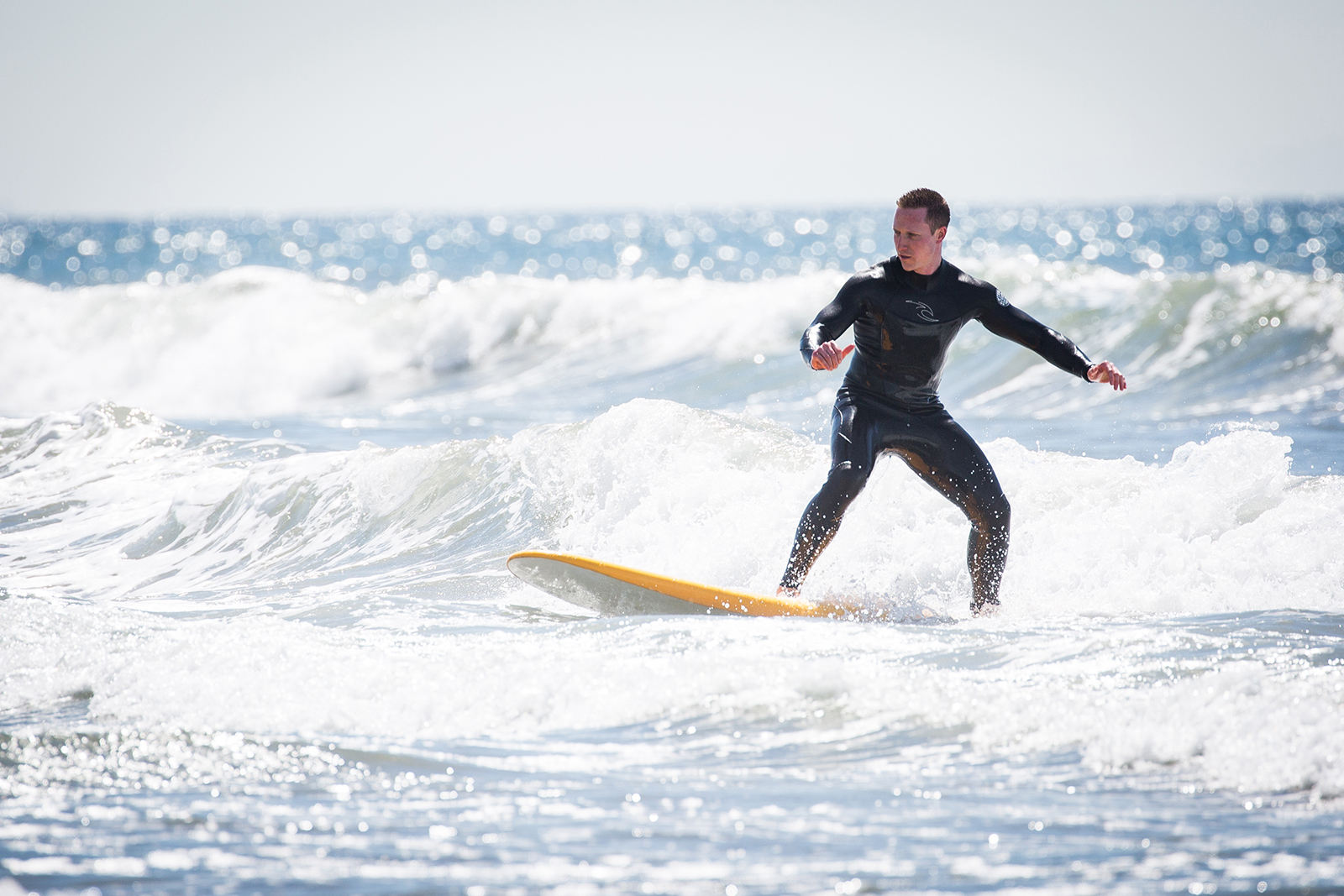 After an hour and a precious handful of successful rides, my legs and arms are on fire, my feet are numb and sand has collected in every bend of my wetsuit. And I just want to keep running back into the surf. This, I’ve decided, will not be a mere mark on my travel checklist, but groundwork for future wetsuit-required excursions in Canada — stormy Tofino, B.C., Ingonish Beach in Cape Breton, N.S., or even Lake Superior’s north shore. “When did you start learning to surf?” my future travel companions might ask. And I’ll say, “A few years back, in Santa Monica, California.” 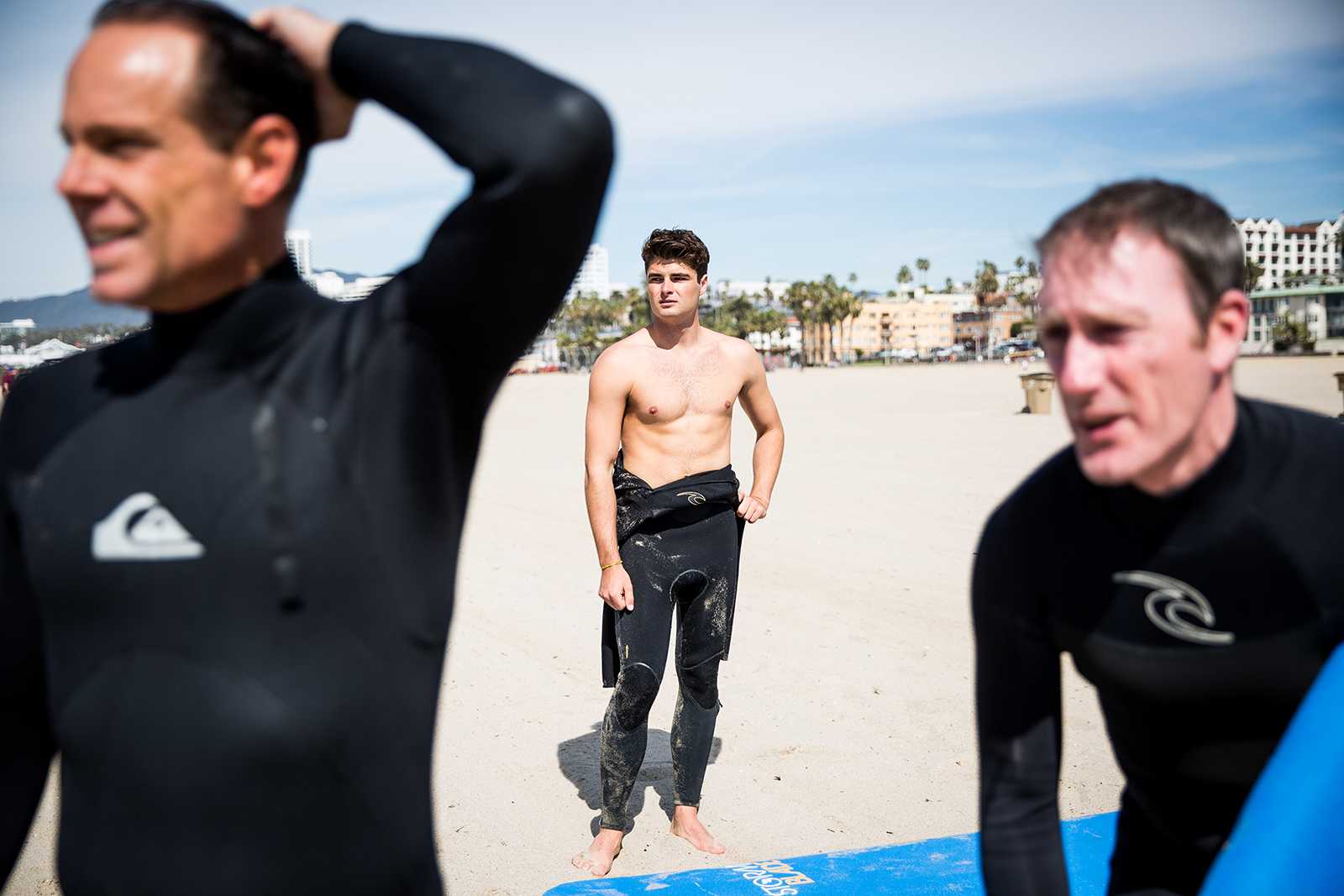 Instructor Joey Jennings (centre) and others watch the stragglers return to the beach after the lesson. (Photo: Max Whittaker/Visit California)

STAY HERE
Besides crisply modern, elegant suites and a spa equipped with eucalyptus steam rooms and dry saunas (could there be a better way to restore yourself after a day spent falling into the waves?), Loews Santa Monica Beach Hotel lays rightful claim to the best ocean-view pool and lounge area in the city. Cosy up to one of several fire pits and clink cocktails while watching a contender for North America’s most beautiful sunset burn out around the Santa Monica Pier. Between 11 a.m. and 9 p.m., take the Santa Monica Free Ride — an open-air, electric shuttle sponsored by local hotels — right from Loews Santa Monica to many of the city’s sightseeing, shopping and culinary hotspots. 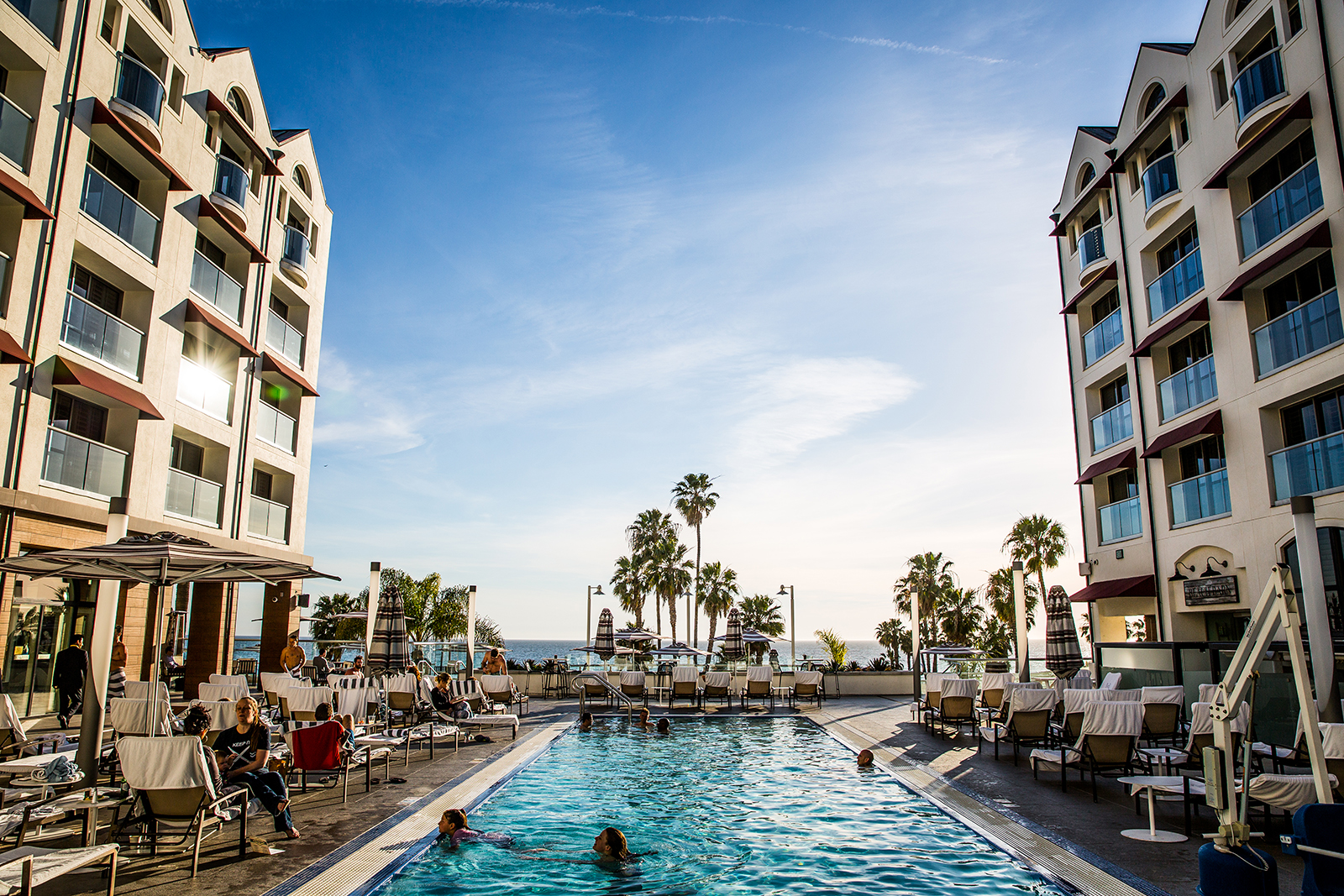 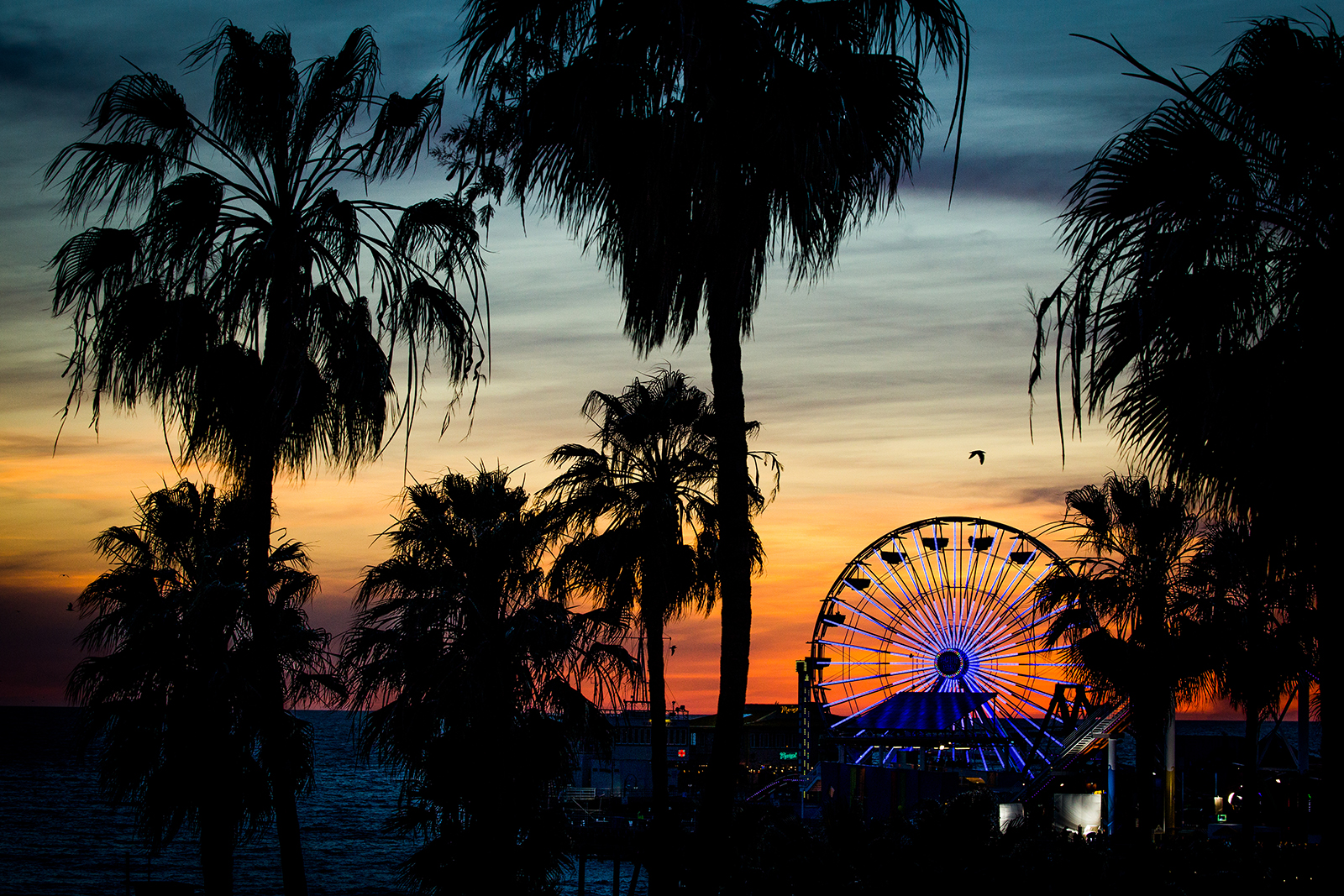 EAT HERE
Cassia, a Southeast Asian-inspired bistro opened in 2015 by Paris Cordon Bleu-trained chef Bryant Ng, his wife Kim and another couple, has been making its own kind of waves. Its shareable dishes — many a remarkable marriage of Vietnamese tradition and ingredients and French techniques — are without exception delectable. The spicy, chilled Vietnamese “sunbathing” prawns, tender grilled pig’s tail and sweet coconut jam-infused kaya toast are alone worth a trip back to southern California. And as is Santa Monica’s restrained way, although we spy Cindy Crawford in the bustling dining room on our way out, Cassia’s other patrons appear to be allowing her to enjoy her experience undisturbed. 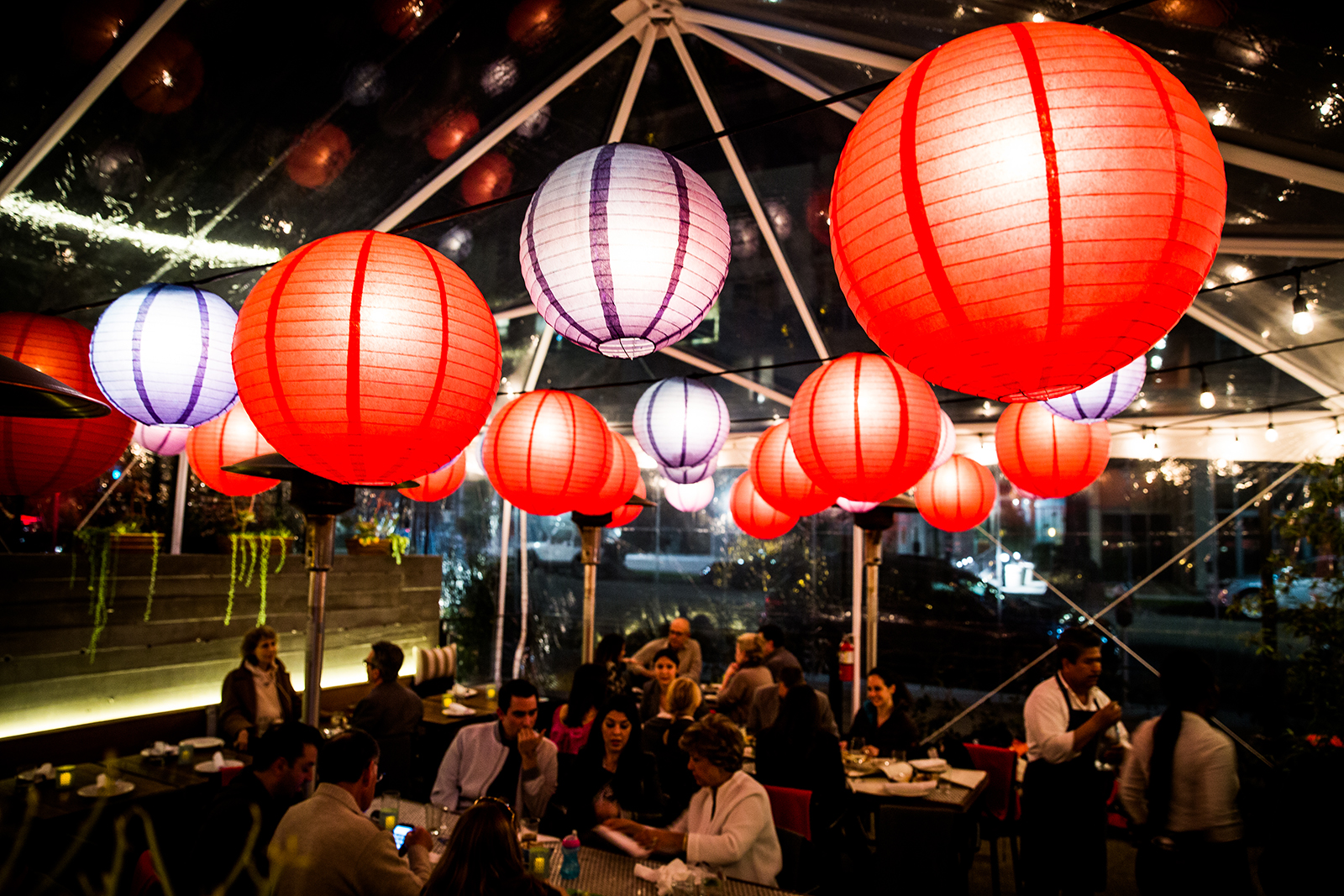 A few blocks up from the beach and just off Santa Monica Boulevard, Cassia serves fresh takes on southeast Asian cuisine with a French influence. (Photo: Max Whittaker/Visit California)