Kakiniit: The art of Inuit tattooing

Inuit tattoos, or kakiniit, were once banned. Now they are worn with pride.
By Jana Angulalik
With photography by Denise Peterson
July 26, 2021

A river intertwined in legend as old as time runs gently from Iqaluktuuttiaq Lake to the Arctic Ocean — and nestled along the estuary among low-rolling hills is my hometown, Iqaluktuuttiaq (Cambridge Bay). This river, or kuugaq as we say in our mother tongue, Inuinnaqtun, is a popular spot to fish all months of the year. So too is the enormous lake it runs from and the ocean they flow to. Ovajuq is a legend that shares the story of a family of giants that lived on Kiilinik Island long, long ago. They starved to death and formed our three mountains; their bladders had burst and eventually formed the many streams, rivers and lakes found on Kiillinik Island, our home.

Much like our knowledge that has seen us through thousands and thousands of years, some of our kakiniit — traditional Inuit tattoos — are still being passed down from generation to generation. I often find myself wondering: what lands did our birthright markings travel and which waters did they navigate when we Inuit lived a solely nomadic lifestyle? Some tattoos fuse modern with traditional designs; others are older than Canada, older than the borders separating Inuit Nunangat, older than the English language. Hand-poking today consists of poking modern tattoo ink into the skin, one dot at a time, whereas skin-stitching is a method where a needle and thread dipped in ink is sewn through the skin and leaves a mark that darkens as it heals — methods older than any books we can find information on kakiniit in.

Our markings survived the years they were banned by our colonizers. Now our beautiful markings are being proudly worn, coming out of secrecy, filling up spaces and faces. Whether they are hand-poked, skin-stitched or machine work, they are always only for Inuit to wear. Our kakiniit are here to stay. Never to be banned again. Never to carry shame again. 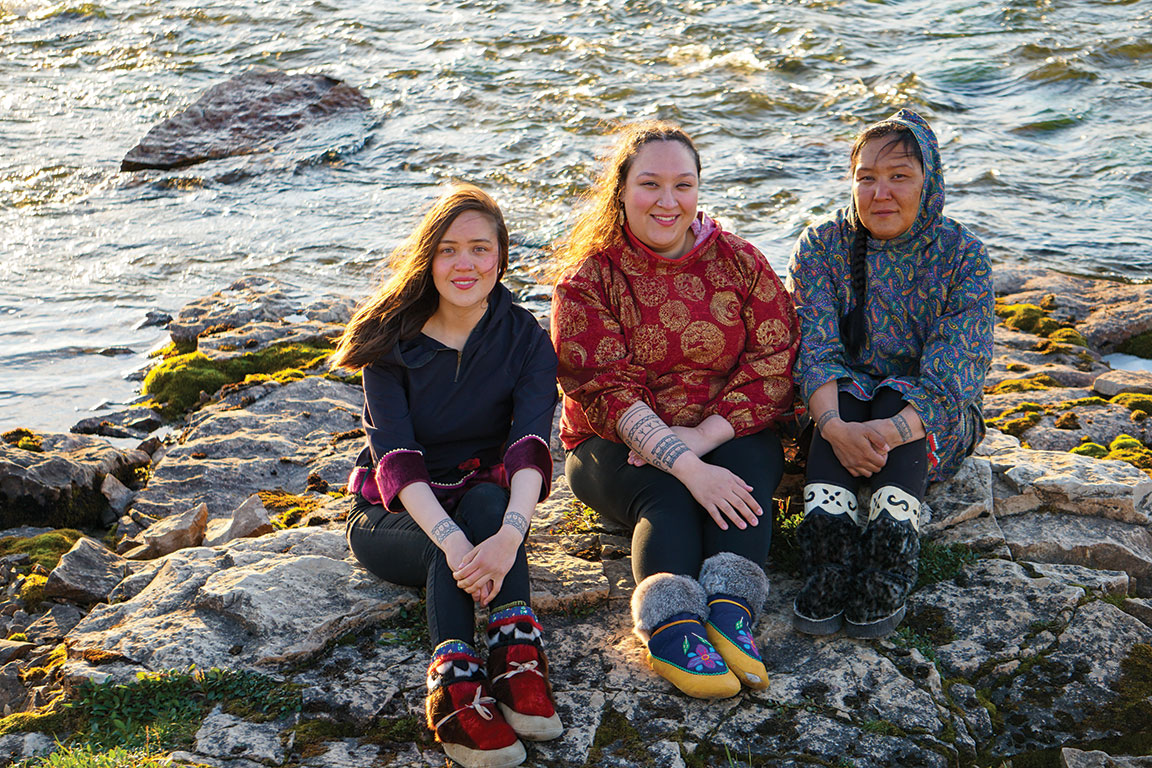 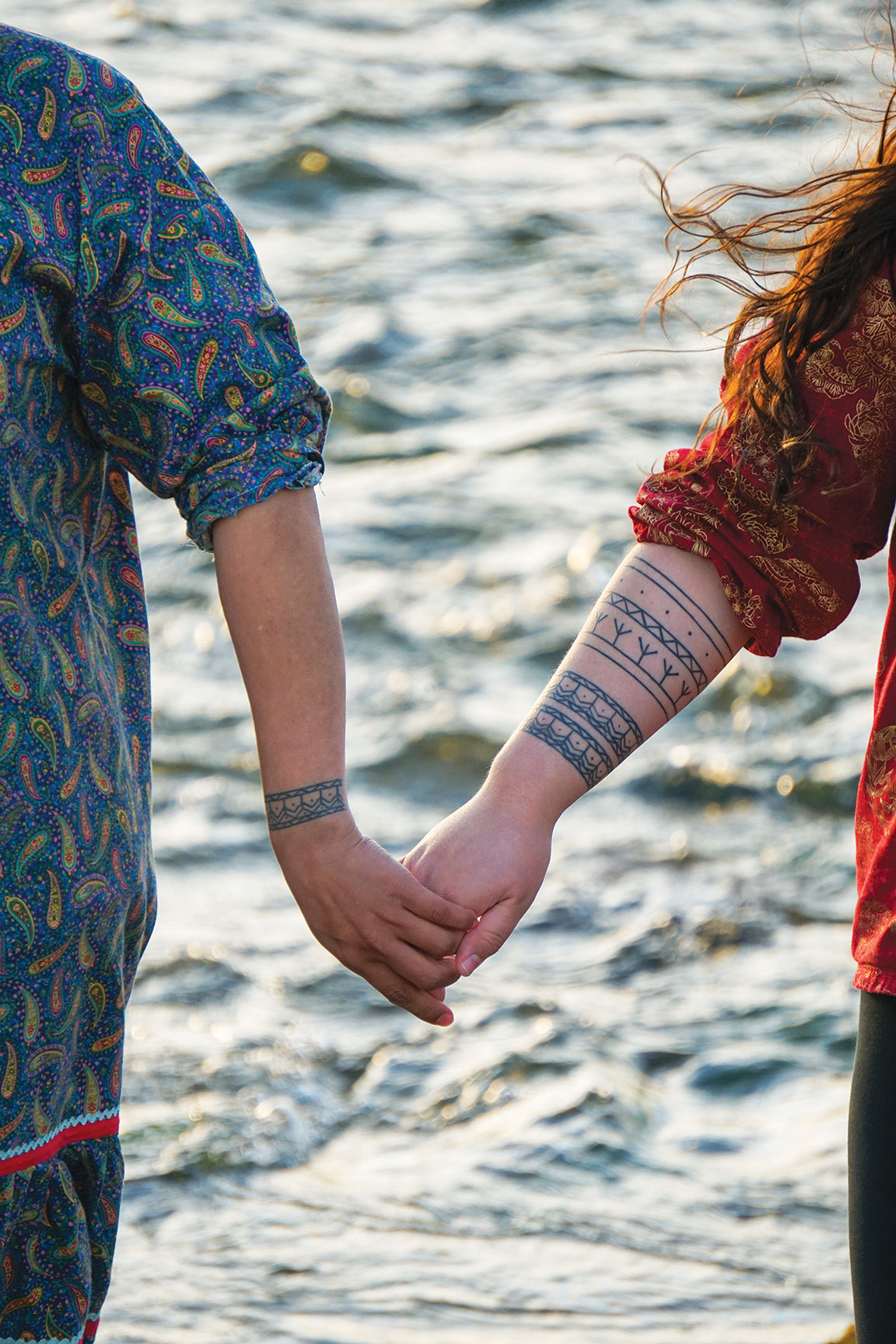 It was no surprise that Tammy, granddaughter of Matriarch Bessie Pihuak Omilgoetok and the late Paul Omilgoetok, agreed to have her family’s photo shoot at “the River,” where Tammy is often seen casting her rod with the midnight sun.

Eight o’clock in the evening in mid-August above the Arctic Circle is filled with pastel skies and a sun that we’re getting used to seeing set once again after a summer with 24-hour sunlight. A perfect night not only to honour kakiniit but also to honour some of the women who wear them proudly, so willing to share with the world, with you. Letting beauty flow like the kuugaq, we all laughed on that brisk, late summer evening. It was important to photographer Denise Peterson and me to work with Pihuak first and foremost because she is the oldest tattooed woman in our community, wearing her traditional forehead and wrist markings at the age of 81 — markings she remembers her great-grandmother wearing, and now she wears them along with three of her granddaughters.

It was as if time had stopped or slowed down — even the undulating kuugaq stream seemed to have paused in awe. One by one, the captivating and eloquent Matriarch Pihuak and her family arrived and made their way riverside. I was completely mesmerized and wondered if the fish swimming beside us also halted mid-water to see four generations of Omilgoetok women and children dressed in their best hand-sewn outfits, with the wind helping itself, dancing in their hair. Head to toe in Inuit beauty. For one of Pihuak’s granddaughters, Genevieve, her wrist markings from her great-great-great-grandmother bring a sense of pride and identity. It’s a statement that her family is still here. And they aren’t going anywhere. 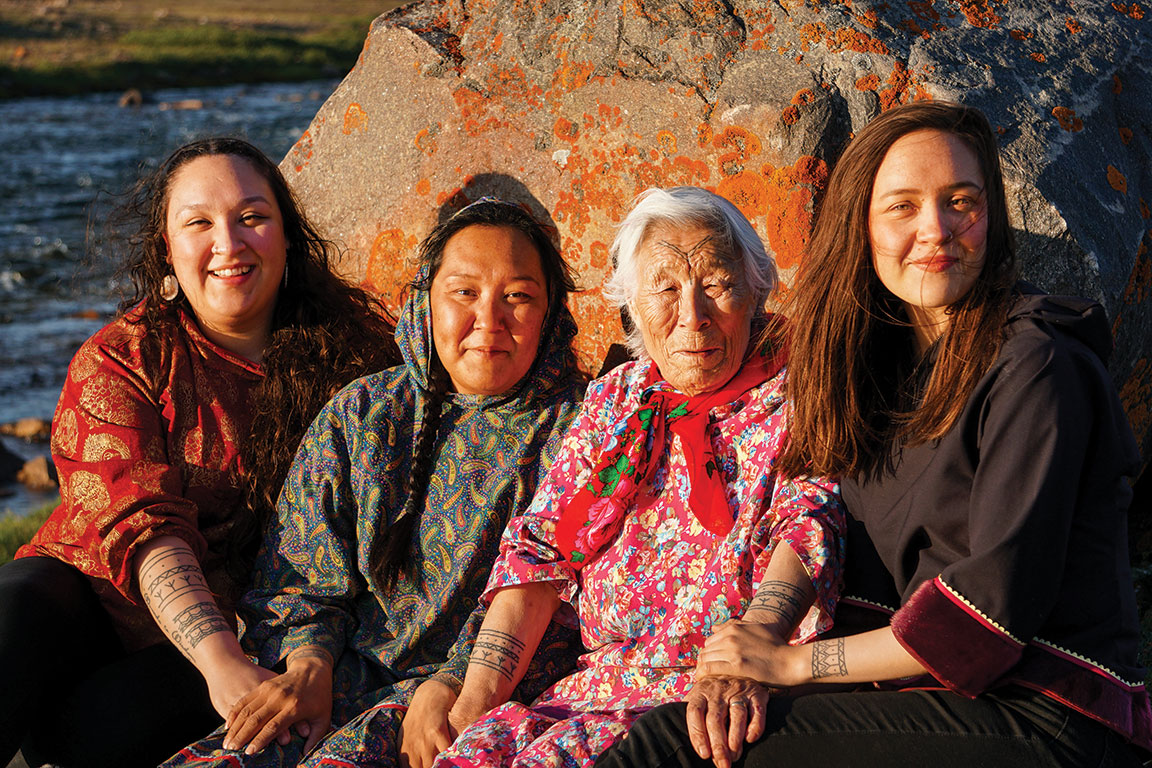 "Our markings survived the years they were banned by our colonizers." 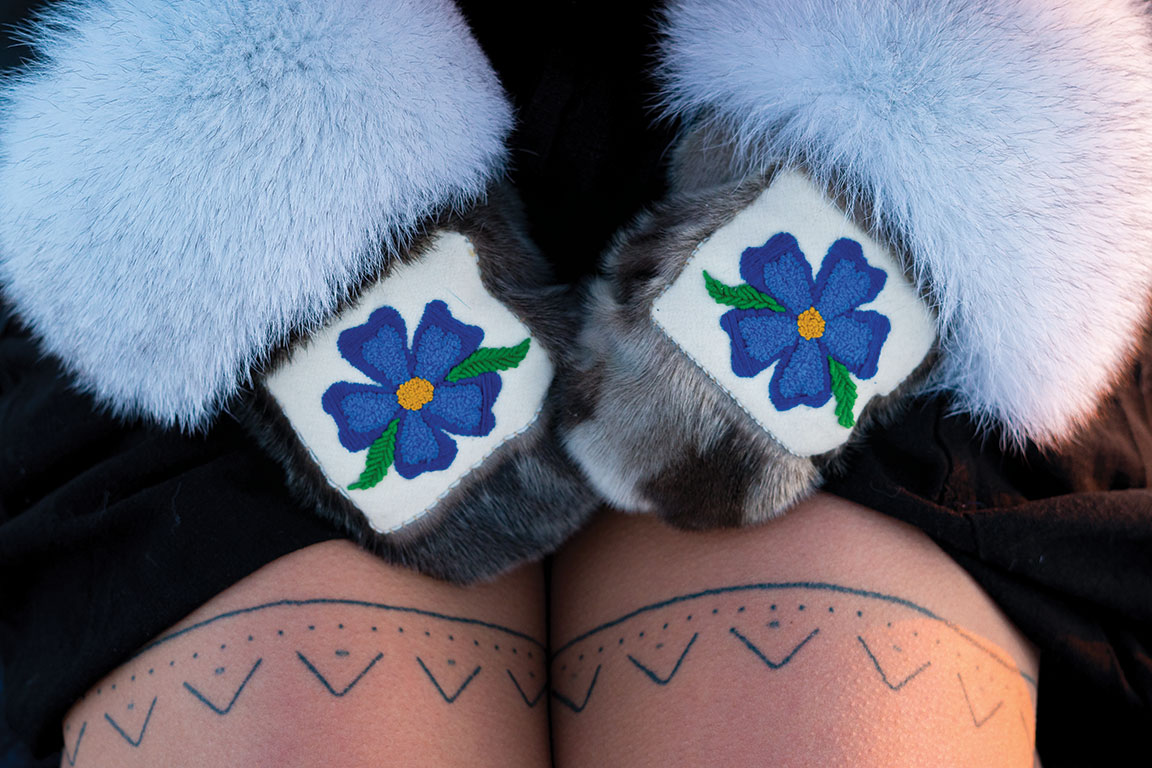 The same water that flows from the kuugaq can be seen here at West Arm, matching the beauty of Darlene Iryirituk Dyer, who graciously took a break from her three beautiful children to share with us her story of her mother bearing tattoo — signifying she is a mother — found on her chest. Although this may not be a traditional tattoo, the mother bearing tattoo resembles an amauti, the traditional garment used by Inuit women to carry their babies. After weeks of being patient for clear weather, on a late August evening the skies seemed to clear up and the winds died down just for Darlene, Denise and me as we met up along an arm of the ocean — even the mosquitos had left us in peace.

Darlene is as vibrant as hot pink sunsets yet gentle as pastel sunrises, a woman who effortlessly embodies the traits of the sweetest mother and a woman who nurtures all those she loves. Her forehead and chest tattoos are two ways she draws her strength, as she finds they represent her as a whole being, as if her tattoos were always meant to be. She shares with me that the dots on her forehead tattoo represent her new skill of sewing, a skill that allows her to provide beautiful garments for her family and brings her closer to her culture. “I proudly wear my markings to help carry into the future generations what my family had lost,” she says. Other ways of gathering strength and creating joy include making memories on the land with her family and friends. As she shared with us such deep and wonderful meanings, I couldn’t help but wonder if the birds watching her from the sky were swooning at the timeless and beautiful being she is.

As the river flows from summer into fall, Ariel Anisalouk Taylor stood before Denise’s camera, showing her cheek and wrist hand-poked tattoos. On a mid-September evening with winter around the corner and a crisp in the air, she confidently posed in front of Iqaluktuuttiaq, our hometown of 1,700 people. Her markings represent her family to whom she is daughter, sister and aunt. She feels strongly connected to her culture through wearing her tattoos — and immense pride that she is one of the few but growing young Inuit with facial tattoos. When I see Ariel, I often wonder how many ancestors are smiling down because she wears her kakiniit so magically, for kakiniit were once banned and done only in secret. Now look at us, look at her: our youth are thriving. 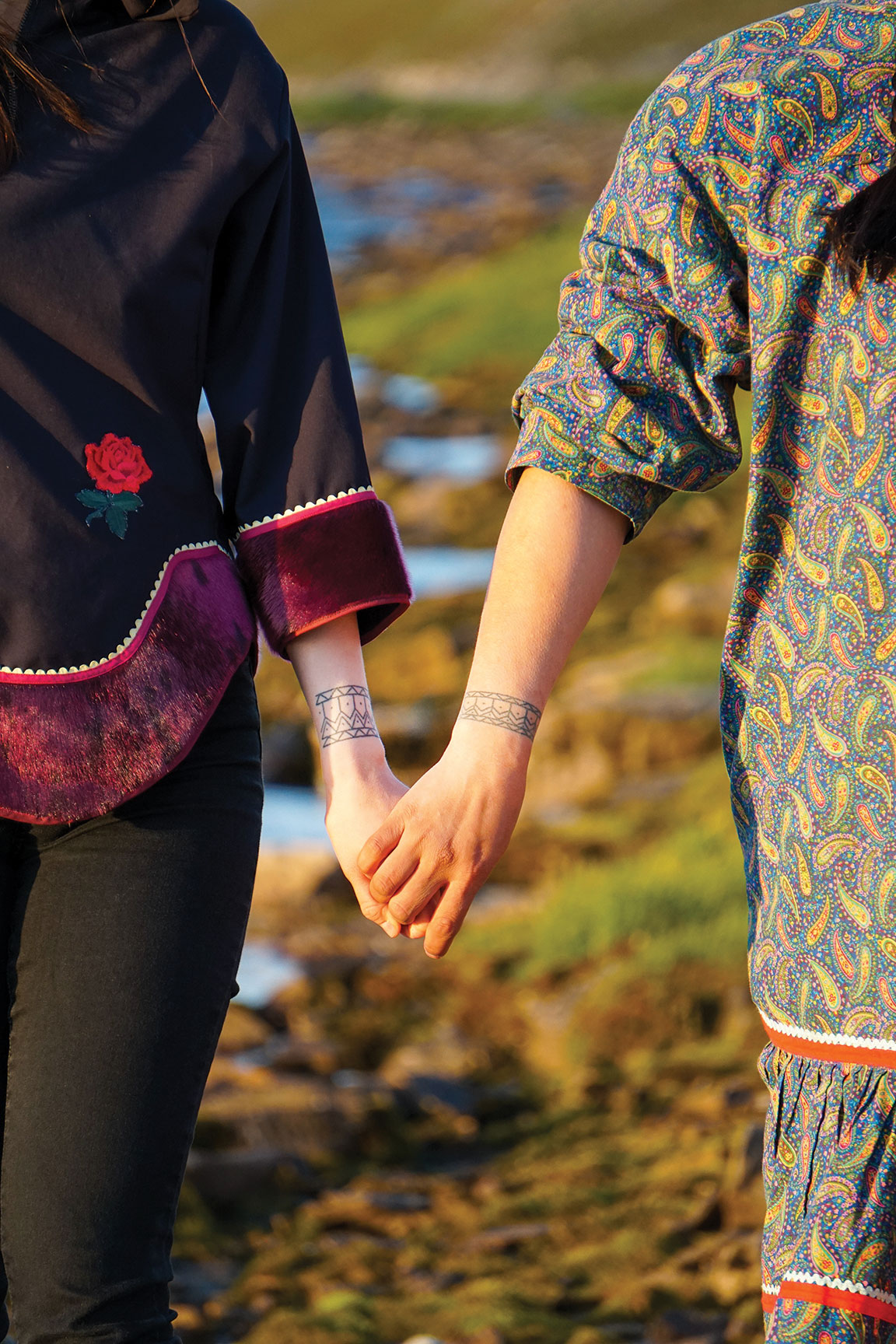 Geneviève Lafrance (left) and sister Tammy Omilgoetok (right) show their wrist tattoos on the banks of the kuugaq. 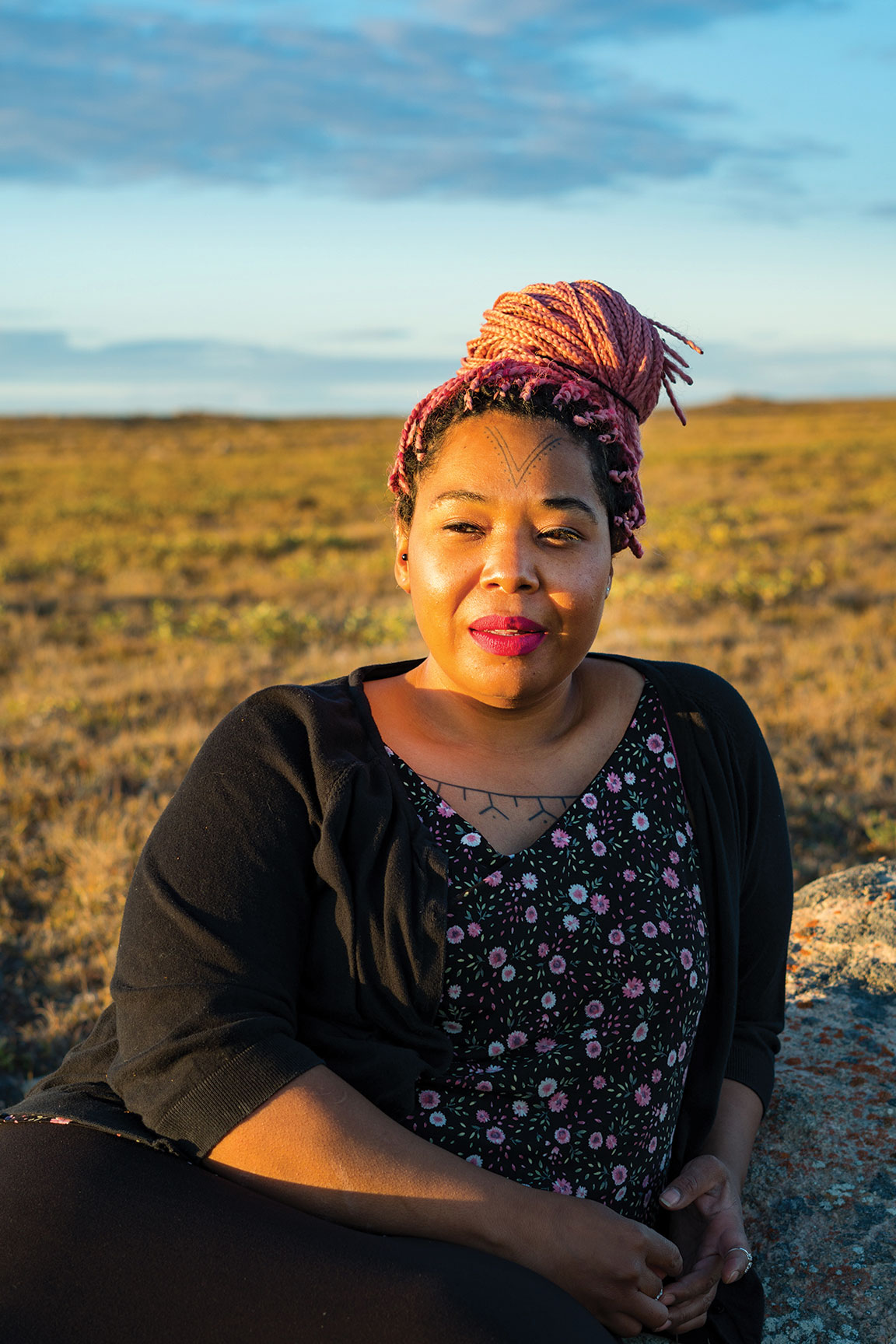 Finally: Amaamaga, my mother, a sweet saxifrage flower yet a fierce warrior of a human. She has an enormous heart filled with love, despite the effects of genocide that she faced, and that we as Indigenous People still face to this day. Alone, she raised three children and three grandchildren, all while healing from her wounds and passing on valuable and loving knowledge along the way. At the age of 55, she received her first kakiniit, her forehead tattoo that represents her holding her late daughter, Patricia Anne Kikpak. This marking helped my mother through her grieving process by allowing her to finally let my sister rest. It allowed Amaamaga to move on with her life, releasing her daughter to the afterlife where she awaits. Often, our forehead markings, before our culture was interrupted, signified entering womanhood — the first tattoo to mark shortly after menstruation began. Now, we are reclaiming our culture and adapting it to fit our life today. My mother’s forehead tattoo is such an example of reclamation, healing with the aim to thrive instead of just surviving. And this year, at the age of 58, Amaamaga finally received her chin tattoo that she had been waiting for me to give her since I learned how to hand-poke and skin-stitch in 2017.

As I prepared to give my first facial tattoo, on my mother’s chin, I peered over my shoulder to see Amaamaga calmly sewing a pair of mitts, looking peaceful and content. I took this moment to be grateful for the strength she has carried through her 58 years. I became emotional because she taught me the value of intergenerational healing — a common aspect and a thread between all Inuit who are tattooed. There we were, healing together. I remember the enormous feeling of pressure and pride with each poke as the afternoon sun filled my home. Like the never-ending flow of our kuugaq, my mother’s strength and love for her family, her people and her community has never ceased. Her session was the calmest session I have ever had, only the sound of the needle hooking her skin, allowing ink to enter and become one with her. Once her chin was completely marked, I placed my tattooed forehead onto hers, and while we shared a moment in the physical world between just us three Inuit ladies, I knew without a doubt that our ancestors filled the room and finally I didn’t have to wonder where my strength comes from — I was looking right at her, my mother tattooed, beaming with pride and joy with her new kakiniit. 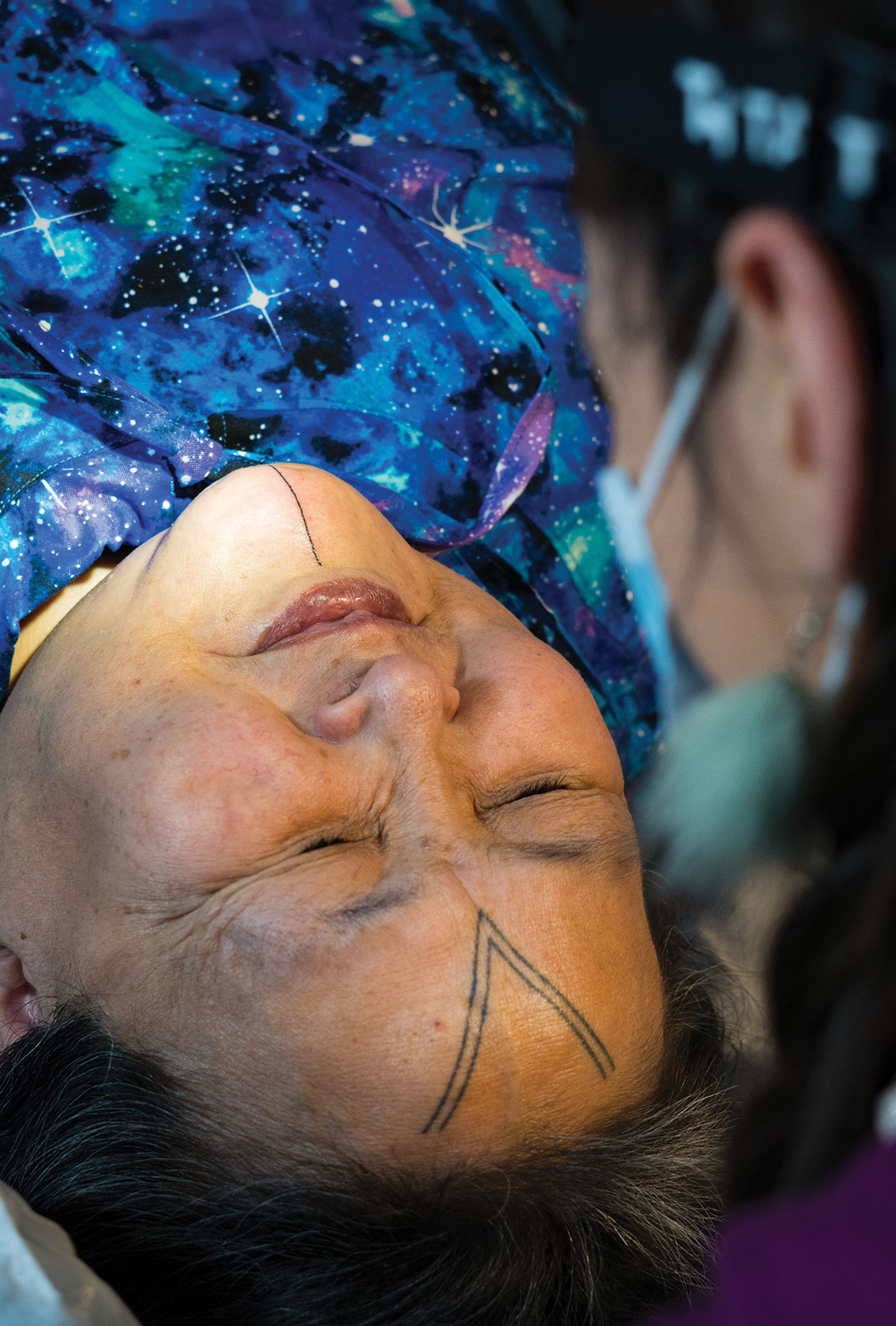 Bella Angulalik smiles in excitement as she waits to see her traditional chin tattoo. Bella had her forehead tattoo completed by another Inuk tattoo artist, to whom Bella is also related. 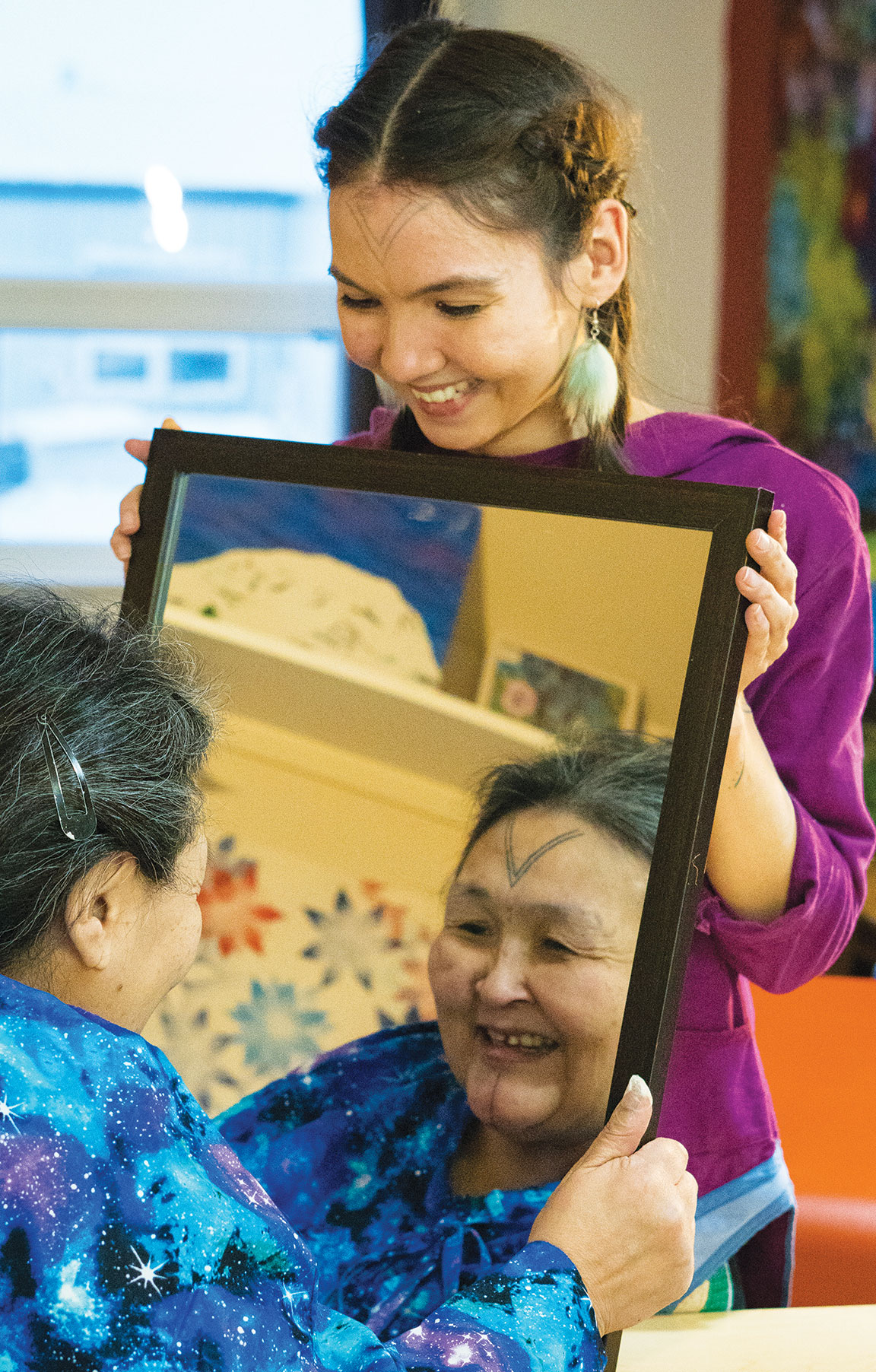 Bella beams with pride as she is shown her kakiniit, handpoked by her daughter, Jana Angulalik (pictured). Both women have matching forehead tattoos that were handpoked by their relative. 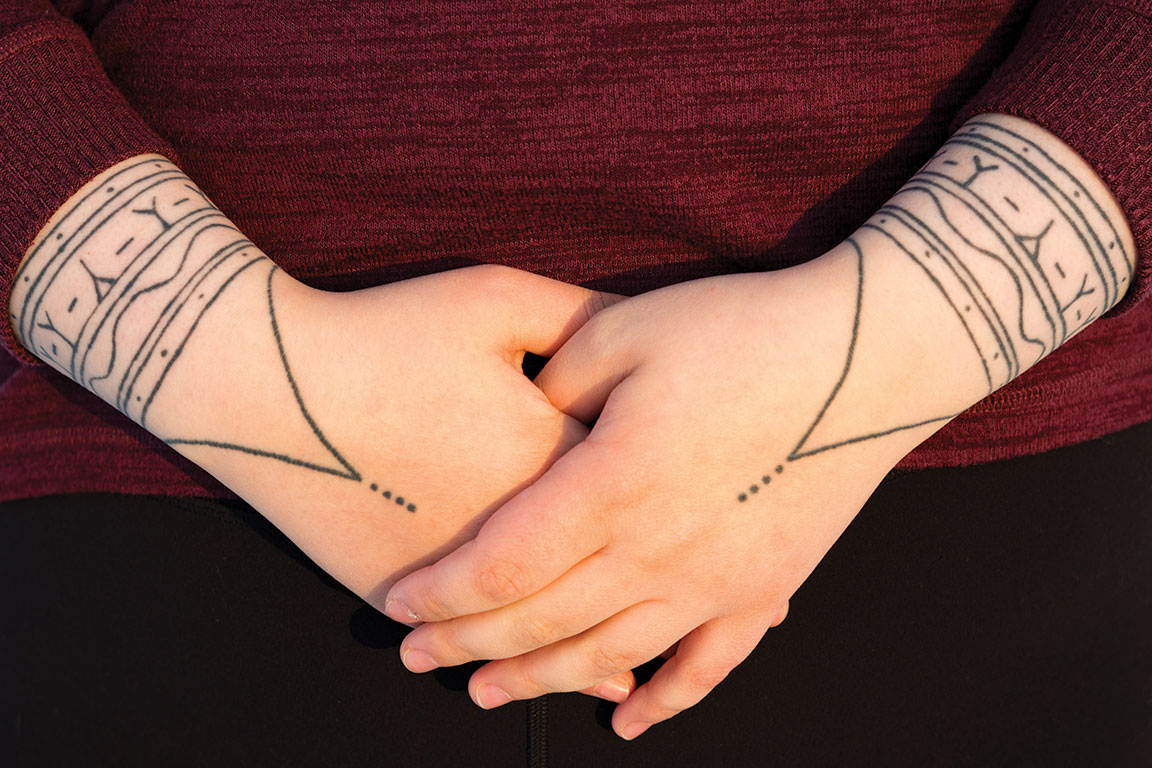 "There we were, healing together." 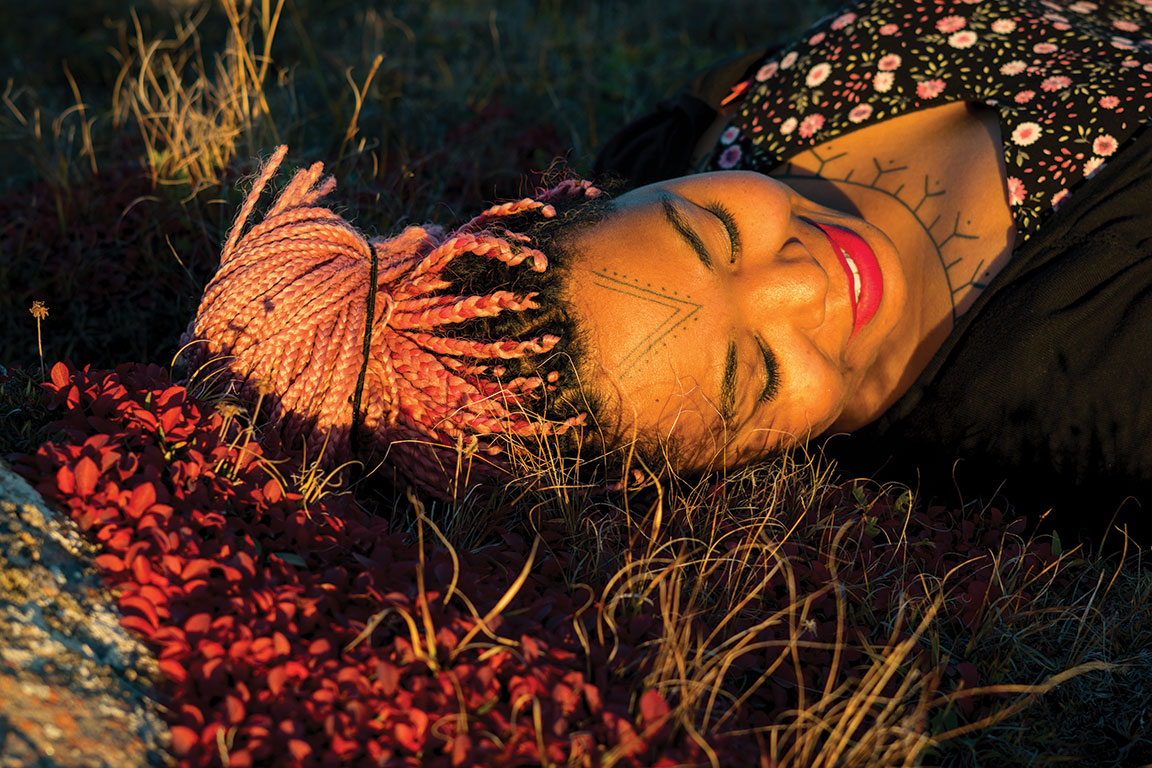 Darlene Dyer with her facial and chest tattoos. The chest tattoo — or mother bearing tattoo — is given to Inuit women after they become mothers. 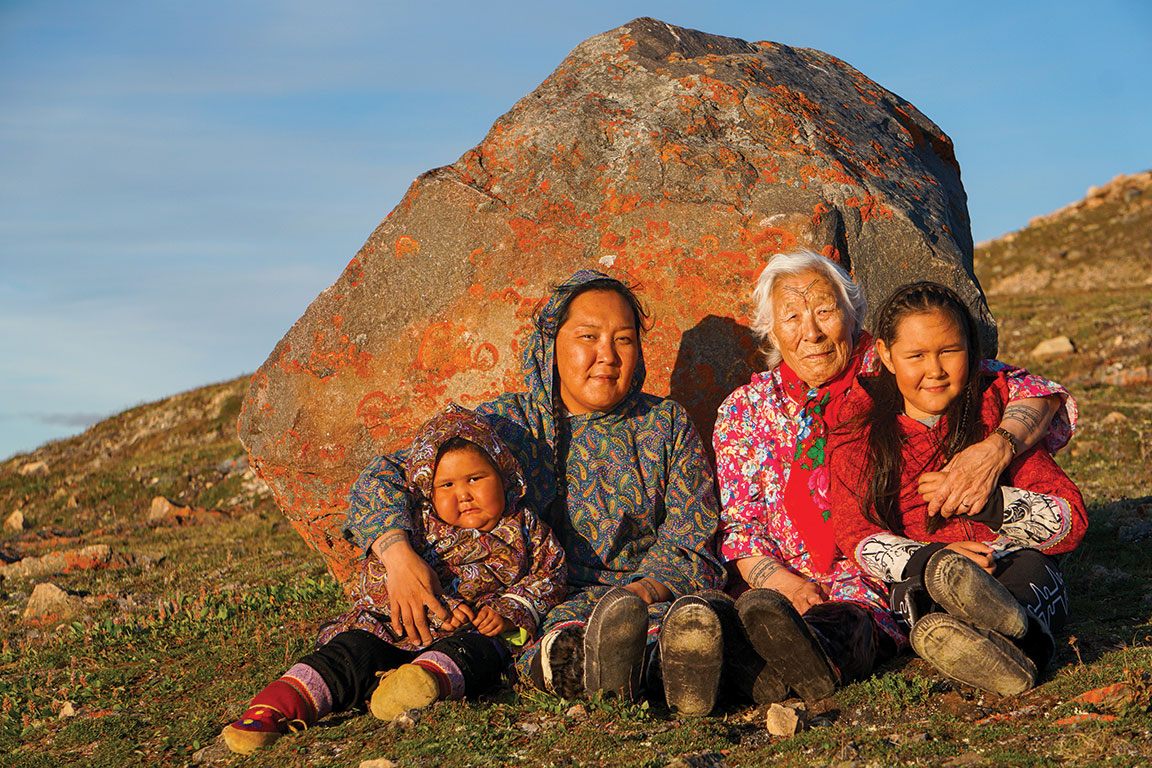 Tammy‘s daughters Lily and Alicia join in for a photo with their great-grandmother Bessie. From left to right: Lily Evetalegak, Tammy Omilgoetok, Bessie Omilgoetok and Alicia Omilgoetok.

"Look at us, look at her: our youth are thriving." 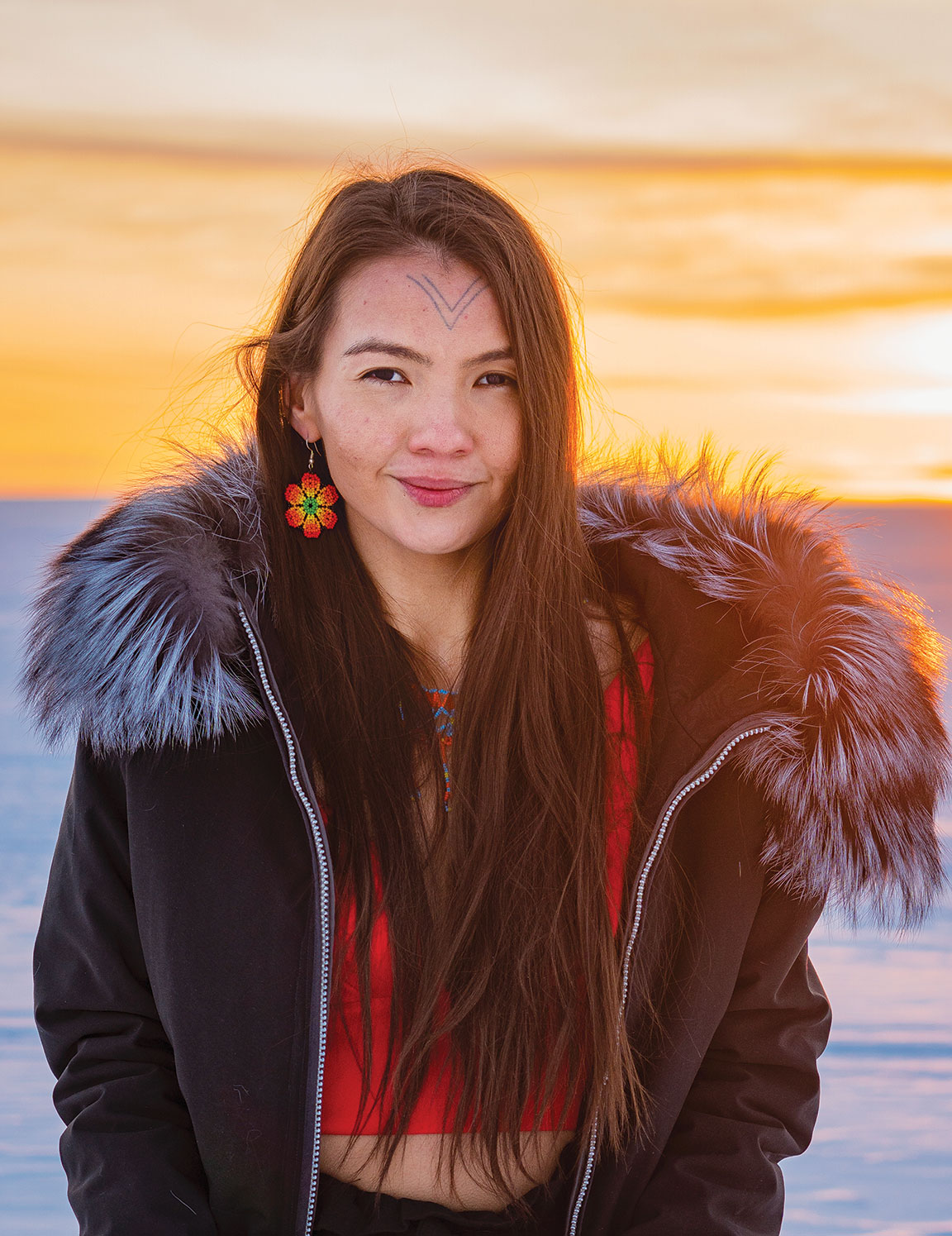 Jana Angulalik is photographed at sunset. 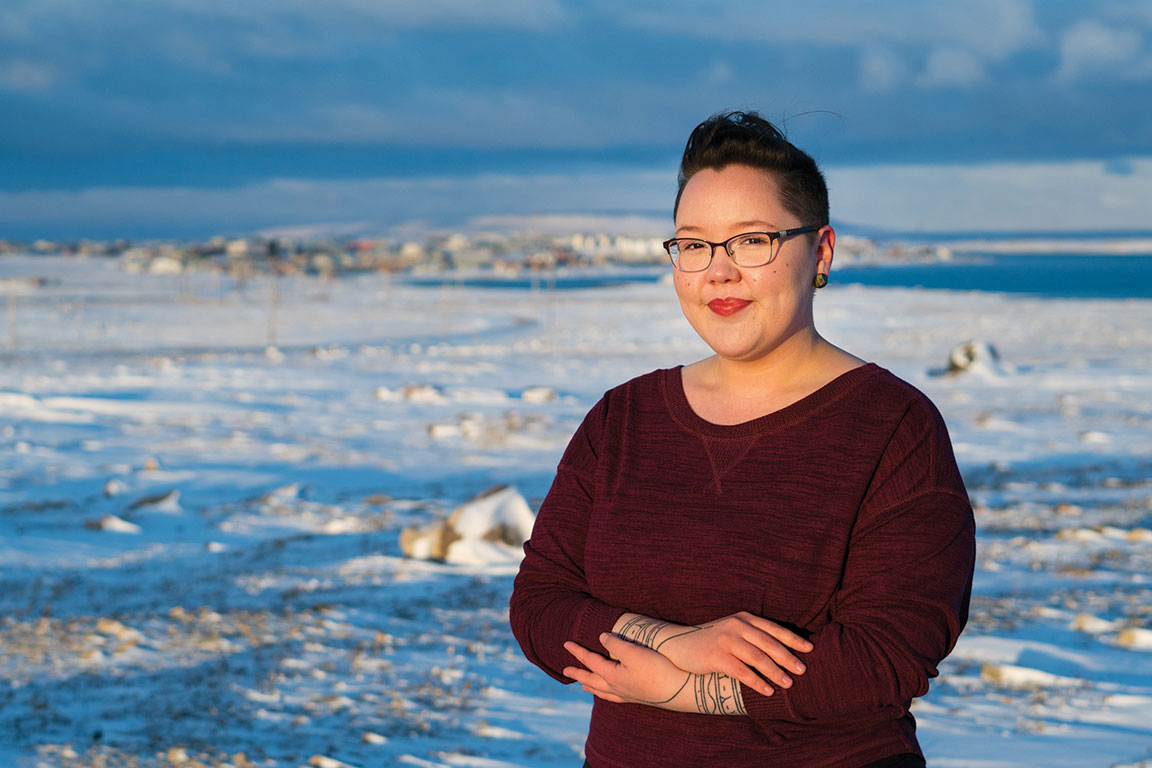 Ariel Taylor shows her cheek and wrist tattoos in front of her hometown Iqaluktuuttiaq (Cambridge Bay). 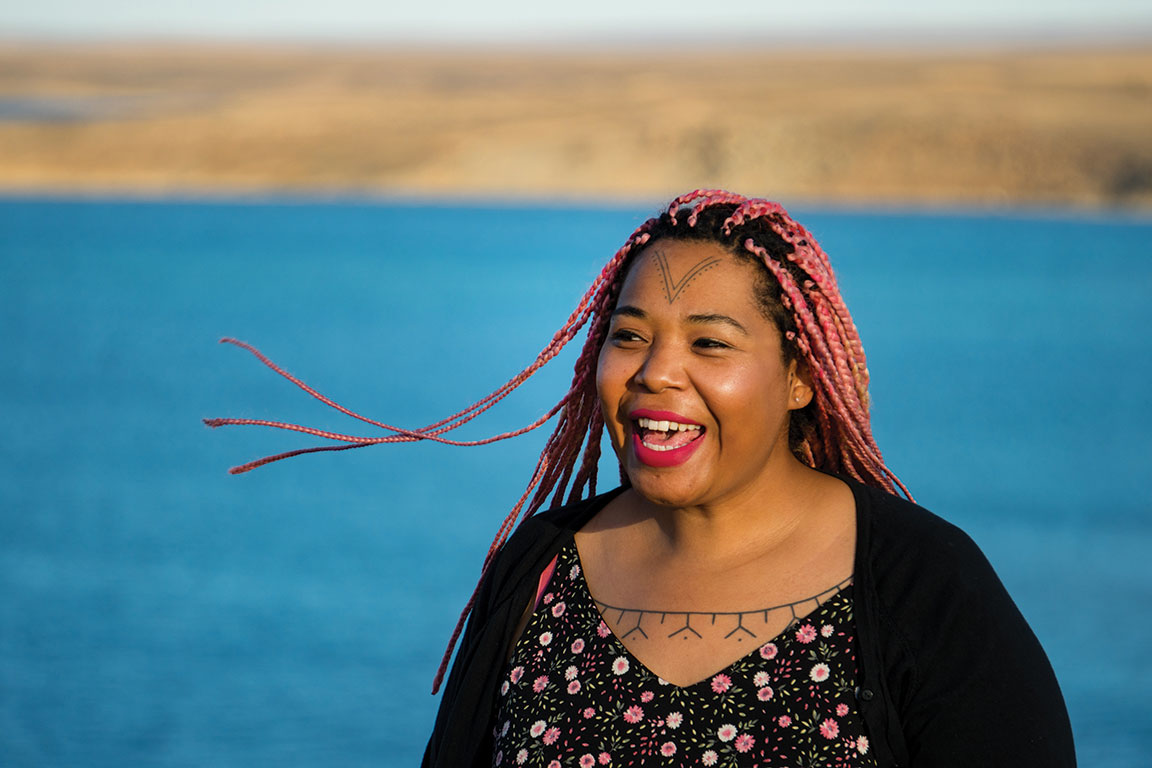 Darlene Dyer laughs in the wind at West Arm.