The bestselling author and RCGS CEO has been given the honorary degree of Doctor of Laws
By Can Geo Staff
June 7, 2019

The University of Calgary has recognized Royal Canadian Geographical Society CEO John Geiger with its honorary degree of Doctor of Laws. The degree, which was conferred during the university’s 2019 Science and Graduate Studies convocation ceremony on June 6, is the institution’s highest academic honour.

The degree citation presented by the faculty of graduate studies noted Geiger’s authorship of the bestselling Frozen in Time: The Fate of the Franklin Expedition and his influential work The Third Man Factor: Surviving the Impossible — a book that became the basis for a documentary and which has continued to “open up a complex area of human experience.” The citation continues, “With the sensitivity of a poet and the precision of a scientist, Geiger brings us closer to ourselves and leaves us with a richer understanding of our true nature.”

The university also recognized Geiger for his leadership of the RCGS, which in the last year alone has seen the geographic education non-profit move into iconic new headquarters at 50 Sussex Drive, Ottawa, and launch the Indigenous Peoples Atlas of Canada, touted widely as the most ambitious program in the Society’s history:

“His work as governor, president and now CEO of The Royal Canadian Geographical Society have made him a national treasure ... [John Geiger] is a man who reminds us of the power of combining the hard work of connecting to the Earth and then taking up the pen to connect us to its majesty and mystery.” 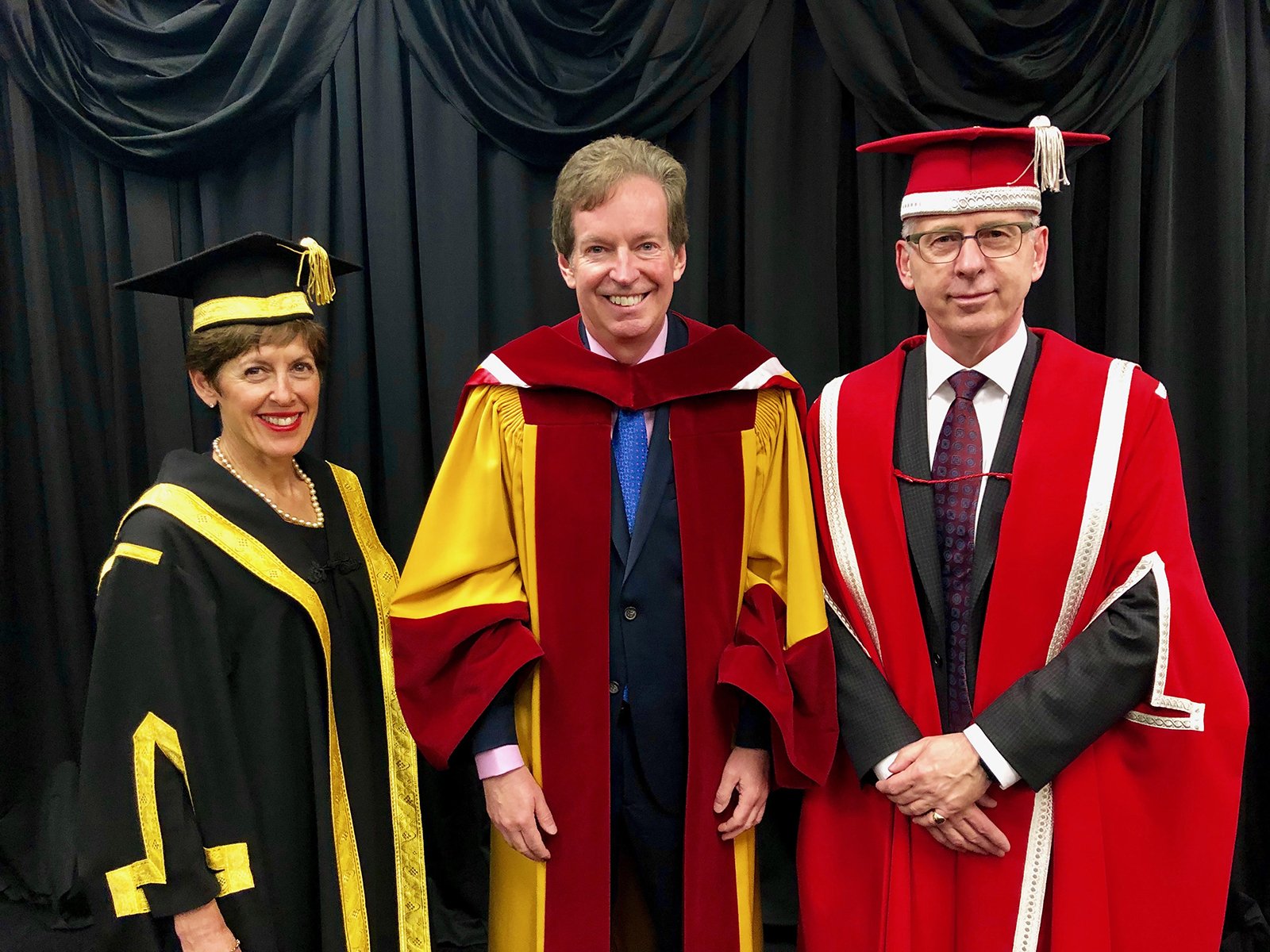 Geiger, who has a degree in history from the University of Alberta, in Edmonton, is also a senior fellow at Toronto’s Massey College, a National Champion of the Great Trail and an Honorary Fellow of the Royal Scottish Geographical Society.

During his acceptance speech, he spoke on exploration’s deep ties to the advancement of scientific research, to confirming traditional knowledge and furthering cultural understanding — reasons for the constant pressure on the RCGS to fund more and more expeditions. Most of all he celebrated the essential human drive that underpins every expedition, a hard-wired impetus that often overrides our survival instinct and puts us at risk.

It is not foolish to embrace such potential harm, he explained. Voluntary risk has never been more pervasive than it is now, and many expeditions have led to great societal benefits, such as the products of space exploration. On a personal level, exploration is a test of one’s abilities and limits, and has brought many face-to-face with a powerful sense both of themselves and of something much greater: “For those who have had the experience,” said Geiger of extreme examples of this phenomenon, “it is deeply personal, sometimes spiritual, and therefore precious.”

To the University of Calgary’s 2019 graduating class, then, he said, “All of you have been equipped with a wonderful education. But there is something else you need, something that can’t really be taught: You need to be open to risk.”