“It’s at the very core of everything”: The significance of Canada’s wild rivers

Only a third of the world’s rivers longer than 1,000 kilometres remain free-flowing. In North America, 70 per cent of those are in Canada. Meet some of the people who want to keep it that way
By Brandon Wei
June 13, 2019

Sixty years ago, British Columbia’s Bridge River Valley was known as the “land of plenty” to the St’át’imc people. Home to deer, moose, and Chinook salmon, the valley — located in the province’s southwest, a few hundred kilometres north of Vancouver — sustained several First Nations communities for thousands of years.

In 1959, that natural abundance was washed away. Two massive dams were constructed as part of the Bridge River Power Project, diverting the flow of Bridge River and flooding the valley.

“We had everything up there,” says Gerald Michel, land and resource coordinator for the Xwisten people who live along Bridge River. “We even had caribou and elk, but the elk have been hunted out and the caribou are long gone.”

The creation of new reservoirs blocked the migration corridors of the native ungulates, forcing them onto highways, where they are frequently struck and killed by vehicles, Michel says. And high-release flows from Terzaghi Dam, which occur when power demand is high or to regulate water levels downstream or in the reservoirs, are playing havoc with fish populations.

“[The flows] are killing fish and destroying fish habitats,” says Michel. “After 2016, we’ve noticed we’ve lost 70-80 per cent of our small fishes. They’re flushed right out of the system.”

The deteriorating health of the Bridge River and the surrounding ecosystem is just one example of what can happen when a river’s course is manipulated by human activity, particularly power generation.

A landmark study published last month found that only one-third of the world’s rivers longer than 1,000 kilometres remain free-flowing. In North America, more than 70 per cent of those rivers are in Canada.

Bernhard Lehner, a co-author on the study and an associate professor of global hydrology at McGill University, says infrastructure is the main culprit — with hydroelectric dams being the most problematic. 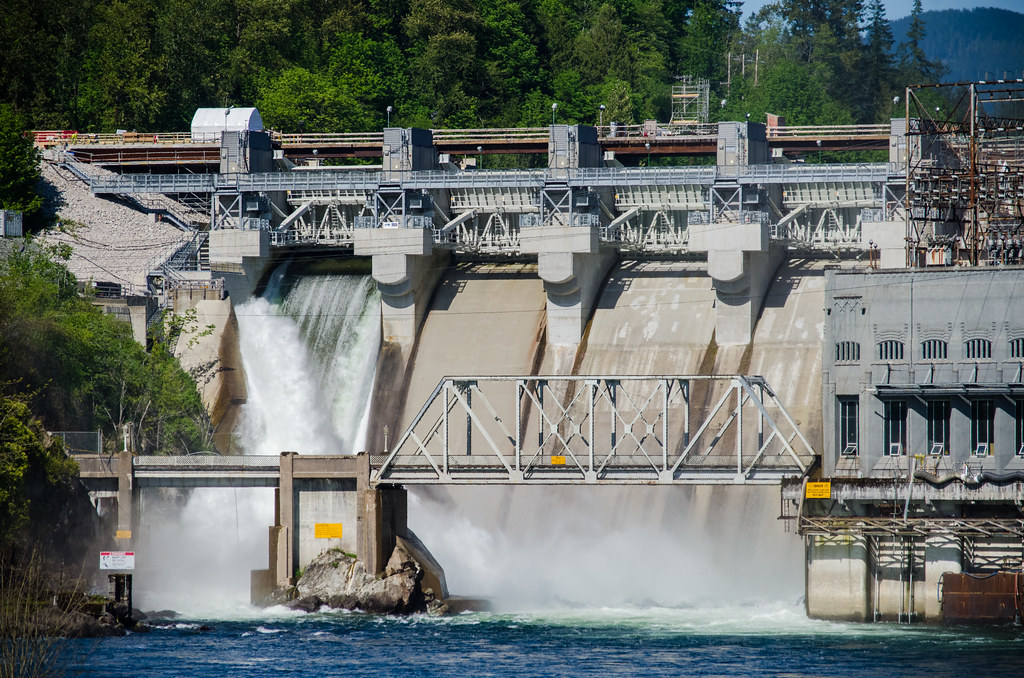 Ruskin Dam on B.C.’s Stave River, a tributary of the Fraser. (Photo: Jeff Hitchcock/Flickr/CC BY 2.0)

Free-flowing rivers prevent the buildup of pollutants in habitats, deliver nutrients and sediment to estuaries, and are crucial to mitigating the effects of climate change, says Heather Crochetiere, a freshwater specialist at World Wildlife Fund Canada.

“Intact ecosystems are better able to adapt to changes in temperature and flow levels,” she says. “When rivers are barrier-free, they act as natural corridors for fish and other species to relocate to conditions that may be more suitable for their survival.”

Crochetiere and Lehner are among a growing number of experts who are calling into question the “cleanliness” of hydropower as an alternative to fossil fuel power generation. With some 3,700 hydropower projects either planned or already under construction worldwide, Lehner says it’s time to reignite the conversation over which renewable energy sources are best for people and the planet.

“Our goal is not to say ‘Stop hydropower.’ In some places, there might be alternatives: solar power, wind,” says Lehner. “We just want to shed some light on the fact that hydropower isn’t perfect.”

The “people of the Nass River”

Andrea Reid is less equivocal. A fisheries scientist and citizen of the Nisga’a Nation, she doesn’t view hydropower as clean energy, given the documented tendency of projects to displace communities and do irreparable damage to ecosystems.

“In many cases, it has eroded the places [communities] used to call home,” she says. “They can’t even live in those places anymore because they’ve been flooded out.”

Reid’s research is focused on the Nass, Fraser and Skeena Rivers — B.C.’s most productive salmon-bearing rivers — and highlights the huge differences in the health of those watersheds.

The Fraser River, which has been dammed along a few of its tributaries and is therefore shallower in its lower reaches, now becomes a lot warmer in the summer compared to the Nass and the Skeena — a trend which is worsened by climate change. This can seriously jeopardize salmon, which are cold water animals, she says.

The Nass River, which flows southwest from the Coast Mountains to Nass Bay by the Pacific Ocean, remains one of B.C.’s last near-pristine river systems and is a fundamental part of the Nisga’a Nation’s identity.

“The word ‘Nass’ is actually a Tlingit word that means ‘guts’ because of its food capacity. The Nisga’a are the ‘people of the Nass River,’” says Reid. “It’s tied to our origin stories. There are water ceremonies that are practiced. There are ceremonies around the first salmon to return. It’s at the very core of everything.” 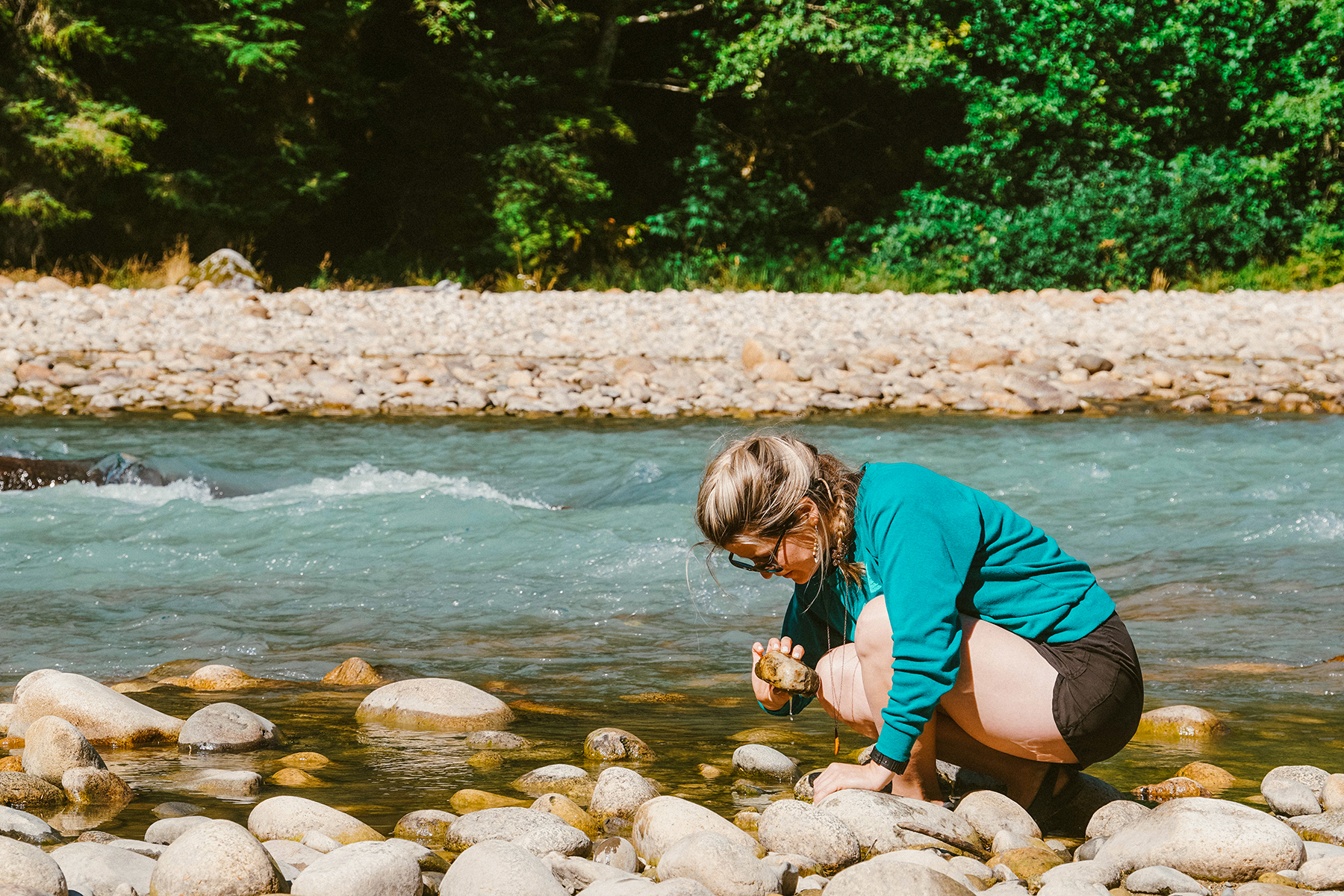 Last summer, Reid spoke with elders across B.C. about the significance of Pacific salmon. What they ended up sharing, however, went much deeper.

“It was about fish, but it was also about the river and people’s connection to it,” says Reid. “Some elders were brought to tears talking about how they used to be able to drink directly from the river, and now they never can. Some even feel compelled to wash their hands after they touch the river, concerned over what’s in the water.”

Reid says she understands the important role hydropower can play in supplying urban centres with an alternative to more polluting forms of energy, but that too often, projects are approved without a full understanding of their potential impact.

“They’re not assessed in terms of the environmental impacts of, if we add this dam to this system, and there are already five dams in that system, what that’s going to do to the totality of the environment,” she says.

Guardians of the Liard

Crochetiere says that a challenge to making informed water management decisions is the lack of data on Canadian watersheds. Many of Canada’s wild rivers are extremely remote, which makes consistent monitoring and reporting difficult.

One such data-deficient river is the Liard. Flowing more than 1,200 kilometres from the Yukon, across northern B.C., to Fort Simpson in the Northwest Territories, it is Canada’s longest wild river. 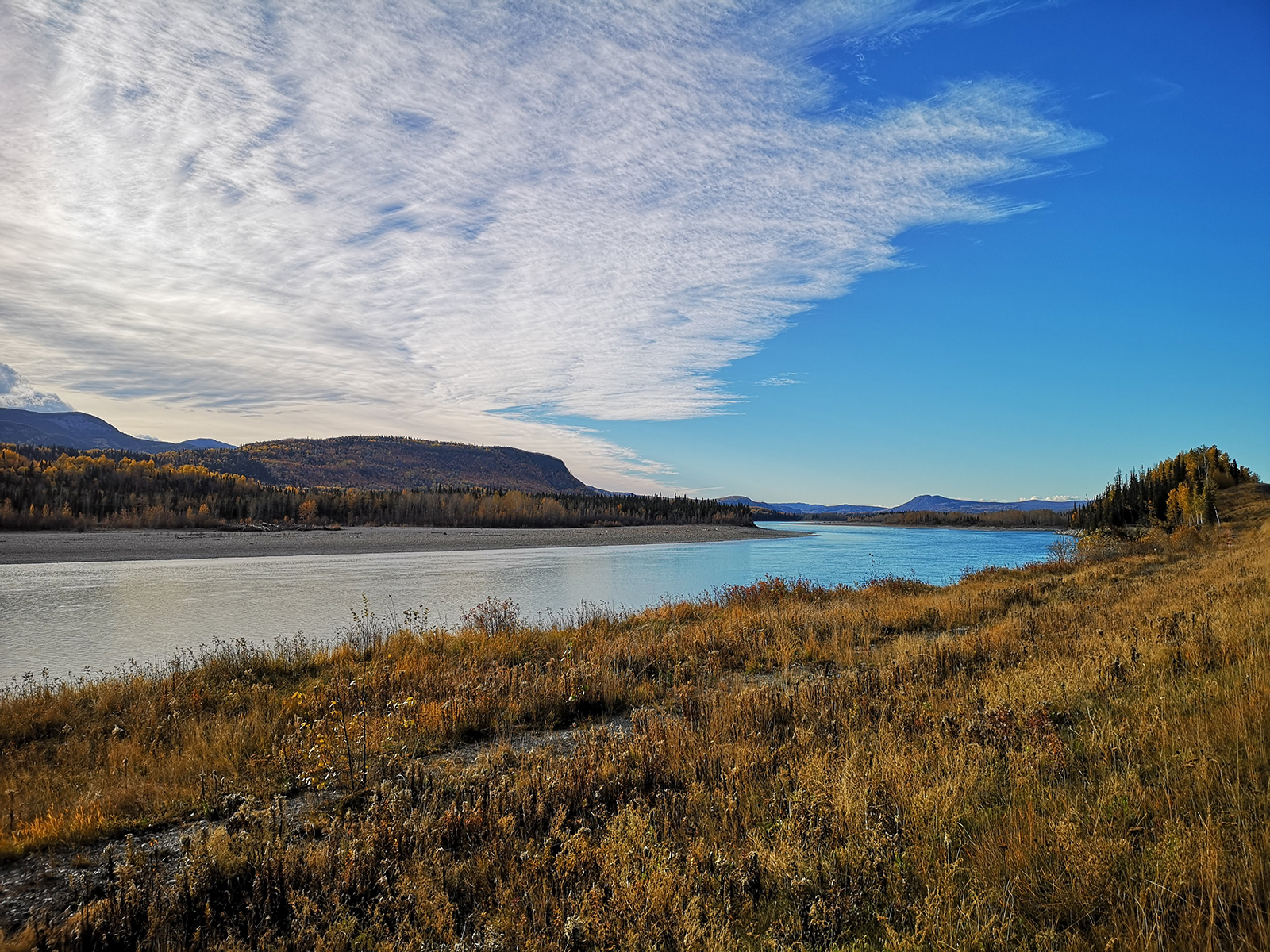 The Liard River. A land stewardship program by the Kaska Dena First Nations recently expanded to include freshwater monitoring, to better understand the health of the river and its tributaries. (Photo: Heather Crochetiere)

Wild rivers are rivers that remain relatively unaffected by human activity. For the Kaska Dena people, who have lived along the Liard for thousands of years, it’s important that the Liard maintains this status.

“We started the program just from complaints coming in: animals being poached, finding wasted meat, the influx of hunters,” says Tanya Ball, traditional knowledge coordinator and full-time Guardian with the community of Lower Post in northern B.C.

Last fall, WWF Canada and Living Lakes Canada helped the Kaska Guardians expand their project by starting a freshwater monitoring program on the Liard and some of its tributaries.

Part of the program included training in sampling benthic invertebrates: organisms that live in or on sediment at the bottom of freshwater bodies and are an indicator of a river’s health, Crochetiere says.

Living Lakes Canada led the training in benthic sampling with help from WWF Canada, who gave technical advice and helped the Guardians identify the exact sites they wanted to monitor.

Ball says they’ve since installed gauges that measure water levels in the Blue River and the Dease River, the latter of which drains into the Liard.

And while the Guardians are still waiting for the lab results from their benthic sampling, Ball says the species they found — such as caddisflies, which are sensitive to poor water quality — indicate the water isn’t polluted. The Guardians plan to do more invertebrate sampling this August. 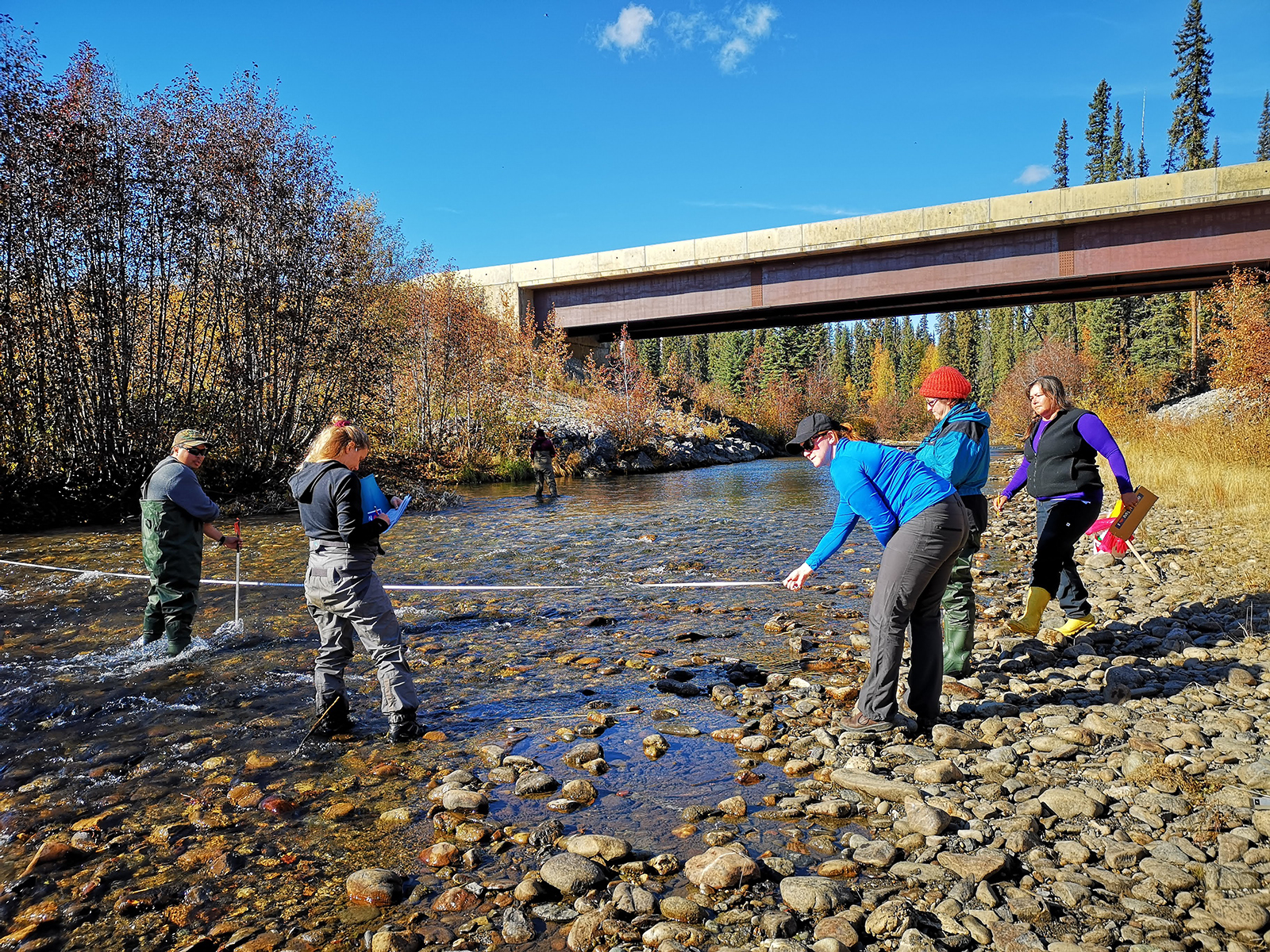 “We want to create our own baseline studies of the rivers and their tributaries in our area,” says Ball, emphasizing the significance it holds for her community.

“We live and hunt along its shores. We depend on it for sustenance. And we haven’t had to worry about pollution or degradation of the area — at least, as of yet.”