A huge part of Canada's northern geography, peatlands are critical to regulating our climate — and more
By Meg Southee
April 30, 2020

The beauty of peatlands may be something that requires a bit of time to appreciate — the subtle colours and contours, the rich tannins of pooled water, the delicate foliage and flowers of low-lying plants and grasses. But we should all appreciate what peatlands do for us.

That's a little easier today, thanks to a new visual story map created by WCS Canada that highlights the huge importance of these areas for climate control, wildlife and people. WCS wants people to see the tremendous beauty and diversity of these areas, while deepening their understanding of their importance. And one of the most important things they do is store carbon.

One square metre of peatland in northern Canada has around five times the amount of carbon found in one square metre of tropical rainforest in the Amazon. Globally, it’s estimated that peatlands store upward of 550 billion tonnes of soil organic carbon, about 30 per cent of the carbon stored in all the world’s soils. Of this, approximately 25 per cent (150 billion tonnes) is stored in Canada’s northern peatlands and forest soils.

These vast carbon-rich landscapes are a big piece of Canada’s geography — peatlands cover over 1.1 million square kilometres or approximately 12 per cent of the country. And the huge amounts of carbon stored in northern peatlands can be locked in for centuries — up to 7,000 years. In comparison, rainforests mostly store carbon above ground and release their carbon over about 100 to 500 years.

This long-term storage of carbon in Canada’s peatlands may not continue, however, if climate change and human development continue to disturb critical areas, such as the vast Hudson Bay Lowlands in Ontario and Quebec, unchecked. When peatlands are disturbed, carbon can be released quickly, making them a carbon source instead of a carbon sink.

Rising global temperatures have led to rapid thawing of permafrost, which is altering carbon-storage dynamics in peatlands, including increasing the amount of carbon dioxide and methane being released. On the other hand, as new unfrozen peatlands form, more carbon may be taken from the atmosphere due to increased plant growth. So understanding how climate change is going to affect the ongoing carbon balance in these vast carbon storehouses will need continuing research. 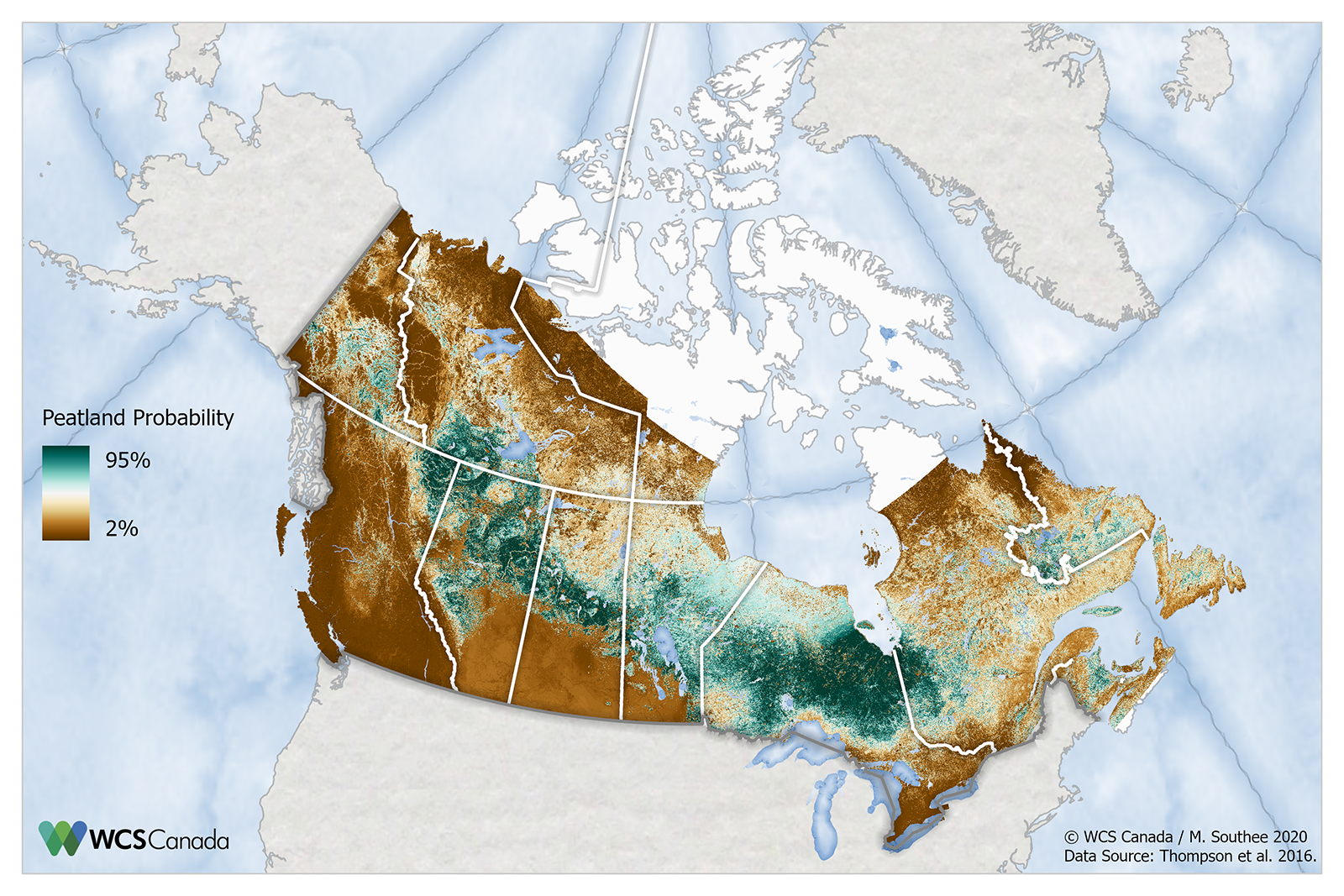 What’s clearer is the impact of human development on peatlands. When mining projects or other developments lead to the draining of peatlands, the peat dries out and becomes more susceptible to fire, which can release huge amounts of greenhouse gases. These fires can linger, smoldering below the surface for years before emerging again as permafrost thaws.

When peatlands are flooded to create hydroelectric reservoirs, meanwhile, carbon dioxide and the even more powerful greenhouse gas, methane, are released. Currently, the Hudson Bay Lowlands contain some of the last mighty undammed rivers of North America, which transport large quantities of nutrients and organic material to the coast and make the bay’s coastal zone very biodiverse.

These lowlands are home to a great variety of life, including many nationally and globally rare plants and lichens. Species of national conservation concern found here include caribou, wolverines, polar bears, lake sturgeon, red knots and Hudsonian godwits.

The draining or drying out peatlands doesn’t just impact the climate; it also affects the rich abundance of species that rely on these areas. In fact, peatlands play an important role in biodiversity conservation, protection of species at risk, water storage and water purification, and in maintaining air quality.

Peatlands are also part of the traditional territories of many Indigenous Peoples across Canada who remain deeply connected to these places as a basis for their social, community, cultural, and economic values. In fact, First Nations are often playing a central role in conserving these places, through monitoring and stewardship as well as through new Indigenous Protected and Conserved Areas, while also sharing their deep traditional knowledge with scientists.

We have much to gain from properly caring for peatlands and a lot to lose from poorly planned development. The impact of proposed major mining activities and roads in Ontario’s Ring of Fire on peatlands and their carbon storage, water filtration and wildlife habitat functions, for example, need to be examined before we start building roads or mines.

Simply carrying on with business as usual in these highly sensitive areas could quickly compromise these irreplaceable values and unlock vast amounts of carbon — the last thing our atmosphere needs right now. And as we have seen with the current COVID-19 crisis, disturbing wild areas can have serious unintended consequences. We need to better appreciate how the health of these places is tied to our health.

We really do owe peatlands a little more respect.

Meg Southee is a GIS Analyst and Spatial Data Manager for WCS Canada who has created a number of story maps over the years displaying important maps and associated information for WCS’ work in Ontario in particular.