The steps being made are towards Canada’s goal of 25 per cent protection of land and ocean by 2025
By Madigan Cotterill
August 19, 2020

Characterized by vast expanses of wilderness and natural beauty, Canada is a land of rich but also troubled biodiversity. Threats such as habitat loss, climate change, and displacement due to human activity are only some of the problems that wildlife and ecosystems face in the country.

“Biodiversity is definitely under threat in Canada and in British Columbia,” says Johnathan Wilkinson, Minister of Environment and Climate Change. “It is under threat around the world, whether you’re talking about marine habitats or terrestrial habitats for animals and plants.”

Wilkinson says that in Canada we now have close to 700 species that are either listed as species at risk, or in the process of going through the listing process.

“That’s a very big number, and it shows the extent of the challenges we face.”

To address this issue and invest in Canada’s nature, the Government of Canada launched a $1.35 billion Nature Legacy initiative, which was announced in the 2018 federal budget. Part of the legacy includes doubling the amount of protected land and oceans across Canada. As the single-largest investment in nature conservation in Canadian history, the initiative will also help species at risk and advance reconciliation with Indigenous Peoples.

To advance this initiative, the government recently revealed a new investment to protect and restore species at risk and habitats in southeastern British Columbia.

Over the next four years, the federal government will be providing $2 million in funding to support the Kootenay Connect project, started by the Kootenay Conservation Program. Launched in 2019, Kootenay Connect is a four-year project that helps to restore and protect species at risk habitats and ecological connectivity within the Kootenay area. This advancement will not only help to protect natural ecosystems today but also in the future.

“We have to do things to start to turn this around,” says Wilkinson.

Habitat restoration and improvement, stewardship, and connectivity are all elements to protecting and enhancing biodiversity in Canada and elements of Kootenay Connect.

“Sometimes we don't realize how much ecosystems are providing us. For many of us in Canada, we live in rural areas, and so we are a part of the ecosystem,” says Marcy Mahr, the project manager for Kootenay Connect. “On a daily basis we are interacting with the habitats and the wildlife around us. It’s very important for us as Canadians to see ourselves living within ecosystems.”

The $2 million investment, provided through Nature Legacy’s Canada Nature Fund, will provide Kootenay Connect with the opportunity to create a package of projects including the ability to monitor the results of on-the-ground treatments. Mahr says that this will allow the KCP to see how restoration and enhancement of habitat work has affected target species.

Connectivity is extremely important for many species because they move around, says Wilkinson.

“Part of this project is really about trying to ensure that there is a connection amongst different areas within this region, where animals can move about, and that their habitat is actually restored to a state where it will support healthy populations.” 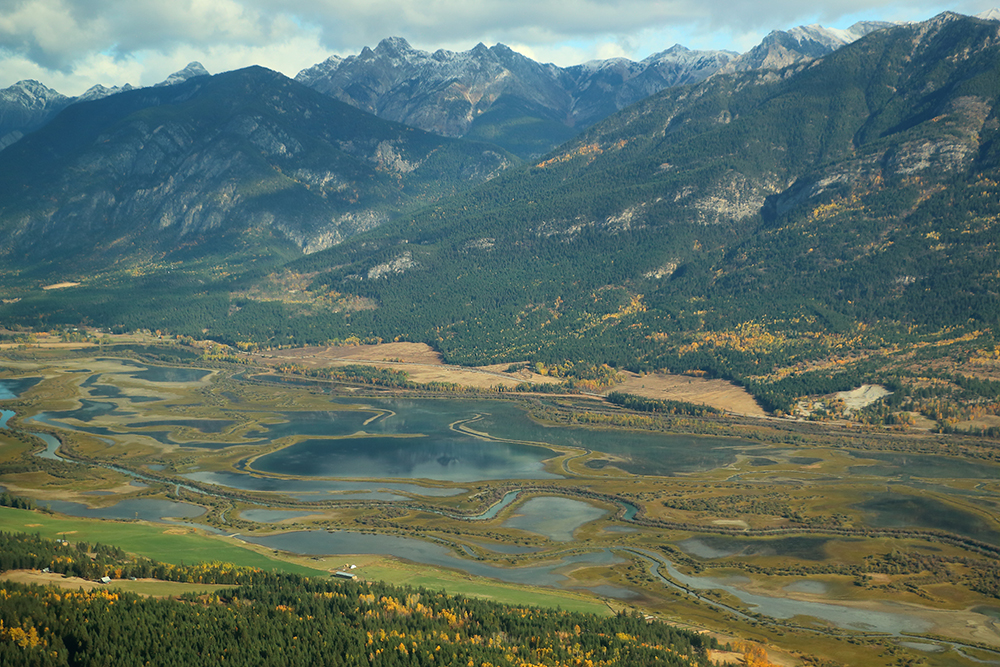 Under species-at-risk work, Wilkinson says that several areas in the country have been identified as priority spaces concerning biodiversity. Typically, these are areas where a lot of different plants and animals live that are under some degree of stress, he says. There is also a community nominated program where communities can come forward and nominate areas of high biodiversity value for funding to do work on a community basis, Kootenay Connect being an example.

“We select those projects that are in areas that are really important from a biodiversity perspective, but also that communities actually have made a commitment to working at the grassroots level to better the state of having,” says Wilkinson.

The KCP was required to come up with a one-to-one match in order to receive the government funding, so they have leveraged another $2 million. Funders like the Columbia Basin Trust, the Fish and Wildlife Compensation Program, and local conservation funds, were able to contribute to the ability to provide the $2 million match. With the support of these funders, the KCP can provide a collaborative approach to conservation in the Kootenay area.

“As Canadians, I think we tend to think of polar bears and orca whales and caribou,” says Mahr. “But what we're doing with the Kootenay Connect project is featuring lots of different species that are contributing to the biodiversity hotspots in our region of the Kootenay.”

Mahr says that an important point underlying the federal announcement is that the Kootenay Connect was picked by the Minister as the first project to feature that is funded by the Canadian Nature Fund. She says that Kootenay is a national case study with an innovative approach to recovering species at risk and the habitats they depend on. It’s an approach that can be applied to other places in Canada.

Over the past number of years, Wilkinson says that they have made an enormous amount of progress.

“I’ve had the great privilege of working on species issues and protection issues since I was elected in 2015.” He says that when they commenced, about one per cent of marine areas were protected, now it is 4.3 per cent. The amount of terrestrial protection was also very low, he says., but they are now well over 12 per cent, and on track to meet the goal of 17 per cent land protection by the end of 2020.

Going forward, Wilkinson says that there are a couple of things that need to be done. One is to have a concrete plan as to how the 25 per cent land protection will be achieved by 2025.

“That’s not simple in a country as complicated as Canada from the jurisdictional perspective where much of the land is actually controlled by the province. We need to have a plan and we need to be working to engage the provinces and helping us do that.”

Mahr says that 25 per cent is a huge goal, and will require the federal government to take leadership, policy, and funding, and quickly direct it to local and regional initiatives that can deliver on the ground results.

“Where I see the hope is if the federal government continues to prioritise protecting biodiversity and planning for climate change and climate change adaptation and being able to provide the funding for innovative approaches, like Kootenay Connect, then I think that goal is achievable.”