Explore how people live on Canada’s largest island, known in Inuktitut as ᕿᑭᖅᑖᓗᒃ, or Qikiqtaaluk
By Nick Walker
March 17, 2017

Baffin stands alone, really. Settled for a handful of decades but peopled for millennia, it outsizes Canada’s second biggest island, Victoria Island, by an area about the size of Italy. Only four other islands in the world are larger — Madagascar, Borneo, New Guinea and Greenland.

The island’s ancestral Inuit groups have lived in the nine present-day communities only since the mid-20th century, when federal policies moved them off the land. In most cases, the transition was neither smooth nor fair, and decades of further growing pains and reconciliation are likely still ahead. But through it all, many Inuit are continuing to foster and take part in traditional cultural activities in the settlements and across this huge land mass.

Mouse over the map below for more about Baffin’s communities and how the region’s Inuit came to live in them. 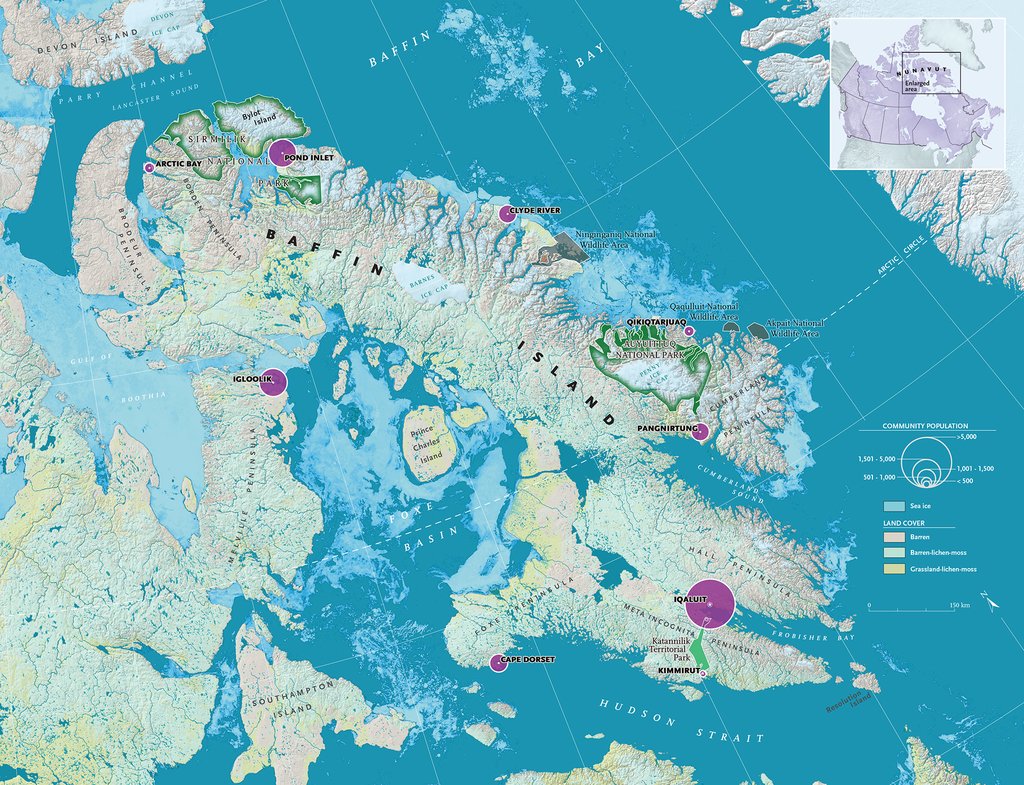 “Private dwellings” refers to separate living quarters with a private entrance. Data for owner-occupied dwellings, government and other staff housing, and public housing comes from the most recent Nunavut Housing Needs Survey, published in January 2011.

Baffin is hardly half a million square kilometres of barren wilderness. More than 17,000 people (48 per cent of Nunavut’s population) live here and on small surrounding islands in nine coastal communities including Iqaluit, the territory’s capital and only city. Nunavut is Canada’s fastest growing region, and Iqaluit had the largest increase of the capitals since the 2011 census.

With an average age of less than 25 and almost double the national birth rate, the territory also has the youngest population. Residents, meanwhile, face the country’s highest cost of living, and housing shortages and aging infrastructure are no secret: it’s difficult and often prohibitively expensive to ship materials and construct and maintain buildings in the North. Everything from swiftly depleted federal funding to climate contributes to overcrowding and waiting lists for homes hundreds of people long in some communities. By necessity, around two-thirds of all housing in Baffin’s hamlets is subsidized.

But things may be looking up. While it could take a decade or more, a burgeoning mining industry and the promise of a deep-sea port in Iqaluit, fibre-optic communications connections and even hydroelectricity and wind power (rather than diesel generation) installed in some communities could by extension help ease residential woes. “The housing crisis is real,” says Brent Crooks, vice-president of NCC Properties Ltd., an Inuit-owned property management company that develops and leases Nunavut infrastructure. “But things have come a long way in the last 10 years. You could have come to the North before that and thought, ‘This is a forgotten people.’ ”

Besides government buildings such as the Nunavut Legislative Assembly, NCC has built hundreds of residential units in Nunavut, including in five of the Baffin communities. Crooks has lived in Iqaluit since 1978 and, as one example of new momentum, points to the ongoing efforts of the Qikiqtaaluk Corporation (an Inuit economic development corporation) to have Nova Scotia-designed NACSI homes certified for use in Nunavut. Not only could these sturdy resin-infused and insulated, jute-fibre-walled homes be easily manufactured in the hamlets, they could drastically reduce material and construction costs.