Inside the fight to protect the Arctic’s “Water Heart”

How the Sahtuto'ine Dene of Déline created the Tsá Tué Biosphere Reserve, the world's first such UNESCO site managed by an Indigenous community
By Laurie Sarkadi
With photography by Angela Gzowski
December 28, 2017

In 1865, more than a century before computer models began pointing toward a future where drought, heat waves and hurricanes bring the world’s population to its knees, an eight-year-old boy from Déline, a small community on the southwestern shore of Great Bear Lake in the Northwest Territories, began having visions. The story goes that the boy, Louis Ayah, was visited by angels throughout his lifetime who rolled out glimpses of the future, prompting him to issue some 30 prophecies, several of which came to pass: white men discovered shiny, glass-like rocks (diamonds); something that’s not a cigarette but is rolled by twisting the paper ends became harmful to kids (marijuana); and Déline came to be led by one united body, the Déline Got’ine government — the administration that as of Sept. 1, 2016, oversees the Northwest Territories’ first independently self-governed community.

One of Ayah’s prophecies that hasn’t yet been fully realized, however, is Déline’s role in a looming climate change apocalypse: Great Bear, the world’s eighth largest lake, will be the last place on Earth people can fish; parched and hungry migrants will flock to its deep, clear waters; boats will jostle for space; Déline must prepare.

On a 28 C day in August in Déline, just before the new government takes over, Ayah’s prognostication doesn’t seem far-fetched. “When I was a kid, the hottest it ever got here in summer was about 15 degrees,” says Walter Bezha, integrated resource management advisor for the new government’s lands, resources and environment department. Bezha has managed the sprawling boreal lands surrounding Déline for years, first under the region’s 1993 Sahtu Dene and Metis Comprehensive Land Claim Agreement and now as a member of Déline Got’ine’s nascent bureaucracy. More than 20 years in the making, the self-government agreement that led him to this point lifts the nearly 500 mostly Indigenous people of Déline out of Canada’s Indian Act, quashes the territorial government’s designation of Déline as a charter community (a blend of band and municipal governments) and integrates the Deline Land Corporation from the region’s land claim agreement into one government with decision-making powers in areas such as education, health, justice, language and community lands.

It also explains why he’s trapped in his office sorting out how to shrink three levels of government into one. His job is to “listen to what the land wants, listen to what the lake wants, listen to what the animals want,” and make decisions using scientific data and the Sahtuto’ine Dene peoples’ giant body of knowledge on the area’s ecology and biodiversity, amassed over eons. Outside Bezha’s office, men wrestle the imposing antlers off a moose they’ve hunted, women slice fresh red meat from a caribou leg for a funeral, and on what UNESCO calls “the last pristine Arctic lake,” people motor small aluminum boats to their nets, where glittering trout await.

The Sahtuto’ine Dene of Déline have created what is possibly the most cohesive and comprehensive Indigenous-led water conservation plan of modern times — one that UNESCO held up as a model for the rest of the world.

To keep the lake thriving, in 2005 a working group of elders, young leaders, stakeholders and representatives from the federal and territorial governments created “The Water Heart,” a watershed management plan explicitly informed by the Sahtuto’ine Dene’s deeply held spiritual belief that Tudzé, a sacred water heart, beats at the bottom of the lake. Its critical life force connects all living things and must be honoured and protected for eternity. The Water Heart later was included in the region’s Sahtu Land Use Plan, which prohibits development in core protected areas and creates buffer zones where limited development can occur, providing it doesn’t threaten the lake’s ecology.

With these efforts to regain governance and stewardship over their traditional territory, the Sahtuto’ine Dene of Déline have created what is possibly the most cohesive and comprehensive Indigenous-led water conservation plan of modern times — one that UNESCO held up as a model for the rest of the world in March 2016, when Déline became the first Indigenous community to achieve UNESCO biosphere reserve status for its management of the Great Bear watershed. The Tsá Tué Biosphere Reserve, which spans more than nine million hectares — an area the size of Maine — and has a core protected area of two million hectares, is the largest in North America and the first in Canada’s North. While the designation is more an award of excellence, it endorses and promotes Déline’s management tools internationally as the gold-star standard for balanced relationships between humans and the biosphere. 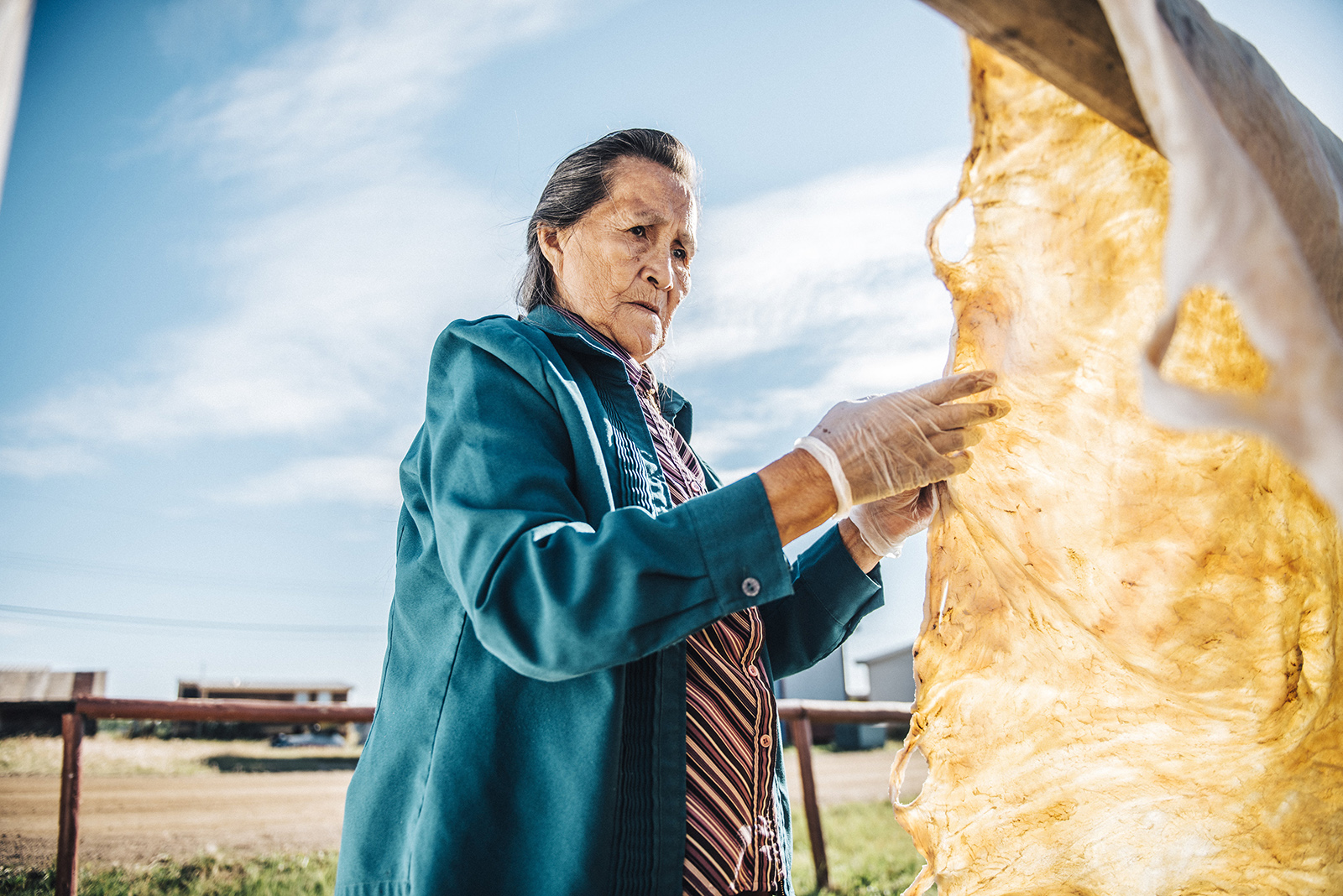 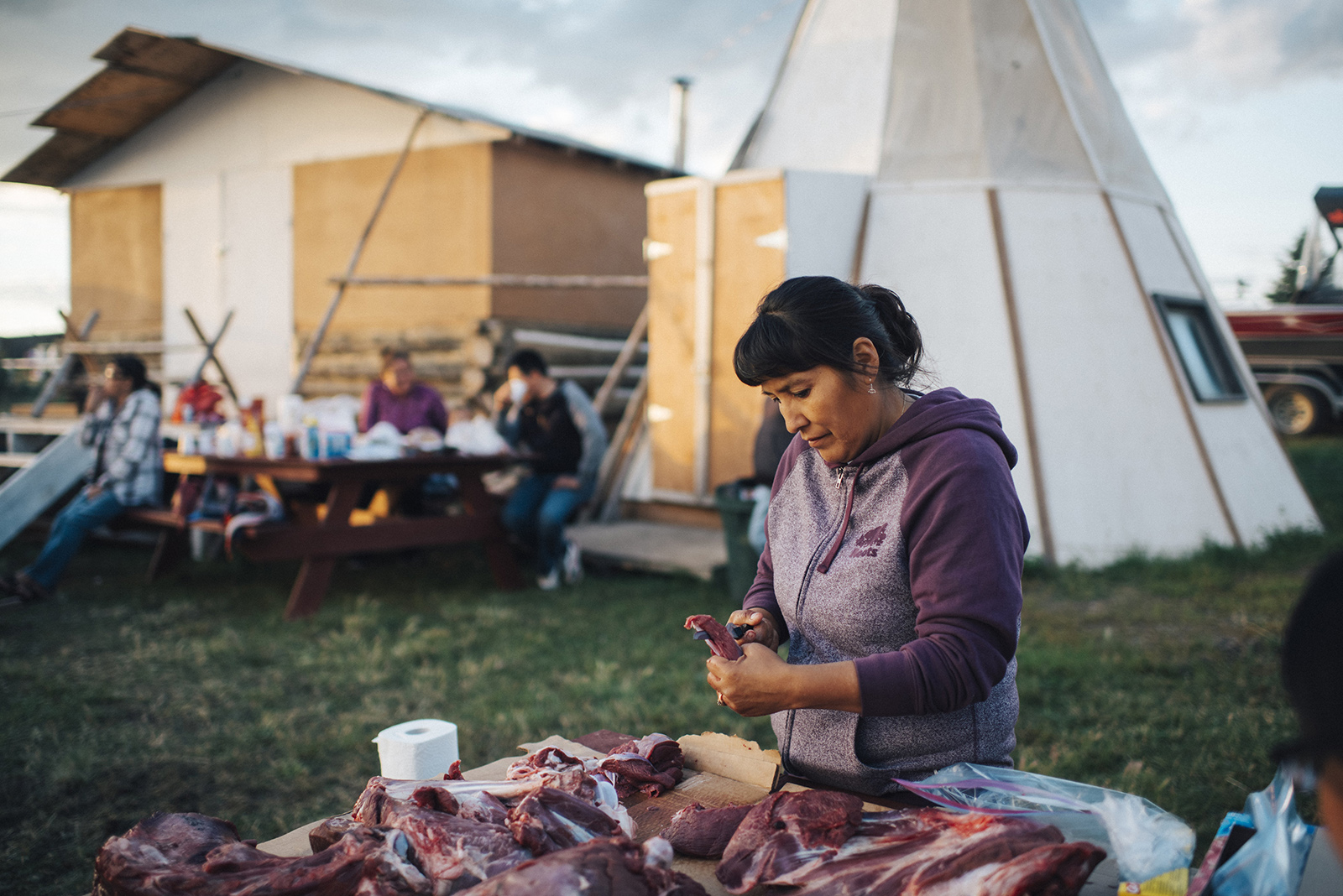 Top: Stella Mackeinzo, a Déline artist whose creations include beadwork and traditional clothing, hangs up a moose hide to dry. Above: Diane Andre prepares caribou meat for her uncle's funeral.

“I’ve never heard elders being so forceful before — they’re usually so kind and patient,” she says. The fact the biosphere designation holds no regulatory teeth didn’t diminish their stridency.

“They didn’t care about enforcing rules. They wanted a strong voice, and I said, ‘What’s the point?’ And they said, ‘If other people hear our stories, it’s sharing, it’s networking.’ It’s sharing how they’ve lived this way so long, their connections, not just to the water, but to the air, the animals.”

Bezha says Ayah’s doomsday divination and the belief in Tudzé, the sacred water heart, underpin his people’s sense of urgency to keep the lake writhing with trout, cisco, whitefish and Arctic grayling while sustaining species such as muskox, wolves, caribou and wolverines. “People will say, ‘Oh these are just legends,’” says Bezha. “Not so. It’s our history, the Dene history, and there’s a lot more to a lot of the things they’re talking about.” 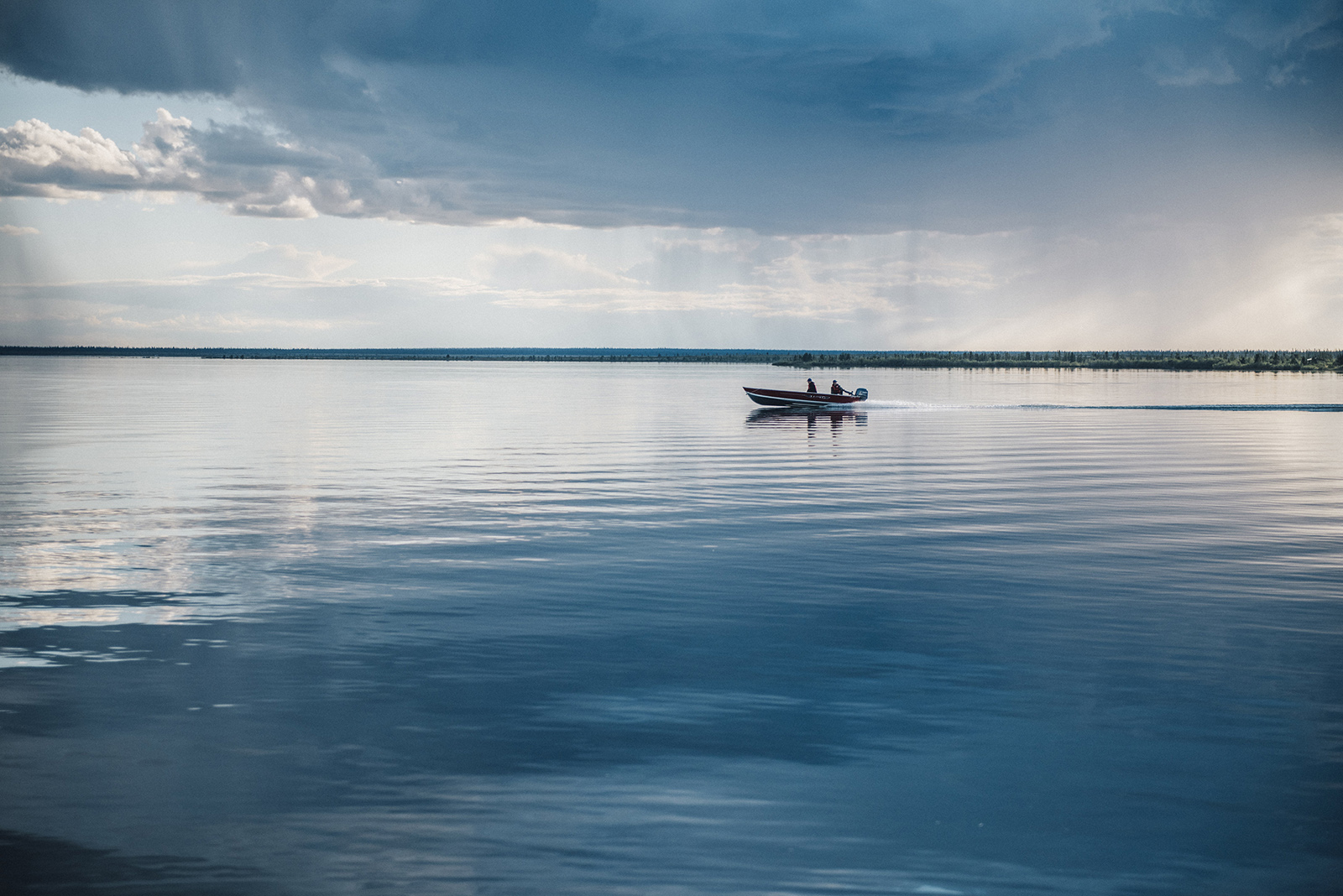 Ayah’s doomsday divination and the belief in Tudzé, the sacred water heart, underpin his people’s sense of urgency to keep the lake healthy.

The Water Heart management plan stresses the interconnectedness of all things and the necessity of caring for the world and all its people — Dene and non-Dene alike. The elders profoundly understand this, many of them having unwittingly quarried the uranium used in the atomic bombs that devastated Hiroshima and Nagasaki — events Ayah had also prophesied prior to 1942, the year his people began working at the federally owned Eldorado Mine at Port Radium on Great Bear Lake’s eastern shore. There, they hauled dusty sacks of radioactive material without protective clothing or warning of the harm it could do. Many died of cancers. Decades later, survivors travelled to Japan to apologize, but the entire painful era, including ongoing remediation at the mine and in the lake — and the failure of the government to safeguard workers from health risks — strengthened Déline’s resolve to control what happens in their homelands.

Déline needs to convey such history, along with the hundreds of encyclopedic entries unilingual elders have in their heads about trails and burial sites or the ecology of a bay during fish spawning or caribou migratory habits, so future generations can integrate that knowledge into biosphere management. Using a combination of geographic information systems, Google Earth and software that allows you to simultaneously see and hear a Sahtu Dene language place name along with its English translation, the Dene Mapping Project is doing just that. “It’s a linguistic gold mine here,” says Phoebe Tatti, a Déline native with a master’s degree in language and education who heads the project. “Each one of the 250 place names we have so far is associated with a story or a legend as to how the name came about.”

That innovative approach to conservation education is part of why Déline’s biosphere bid is backed by The Pew Charitable Trusts, the U.S.-based public-policy non-profit. Pew is helping Déline develop eco-tourism and meet its UNESCO obligation to research and monitor water quality and wildlife populations — especially dwindling caribou herds. 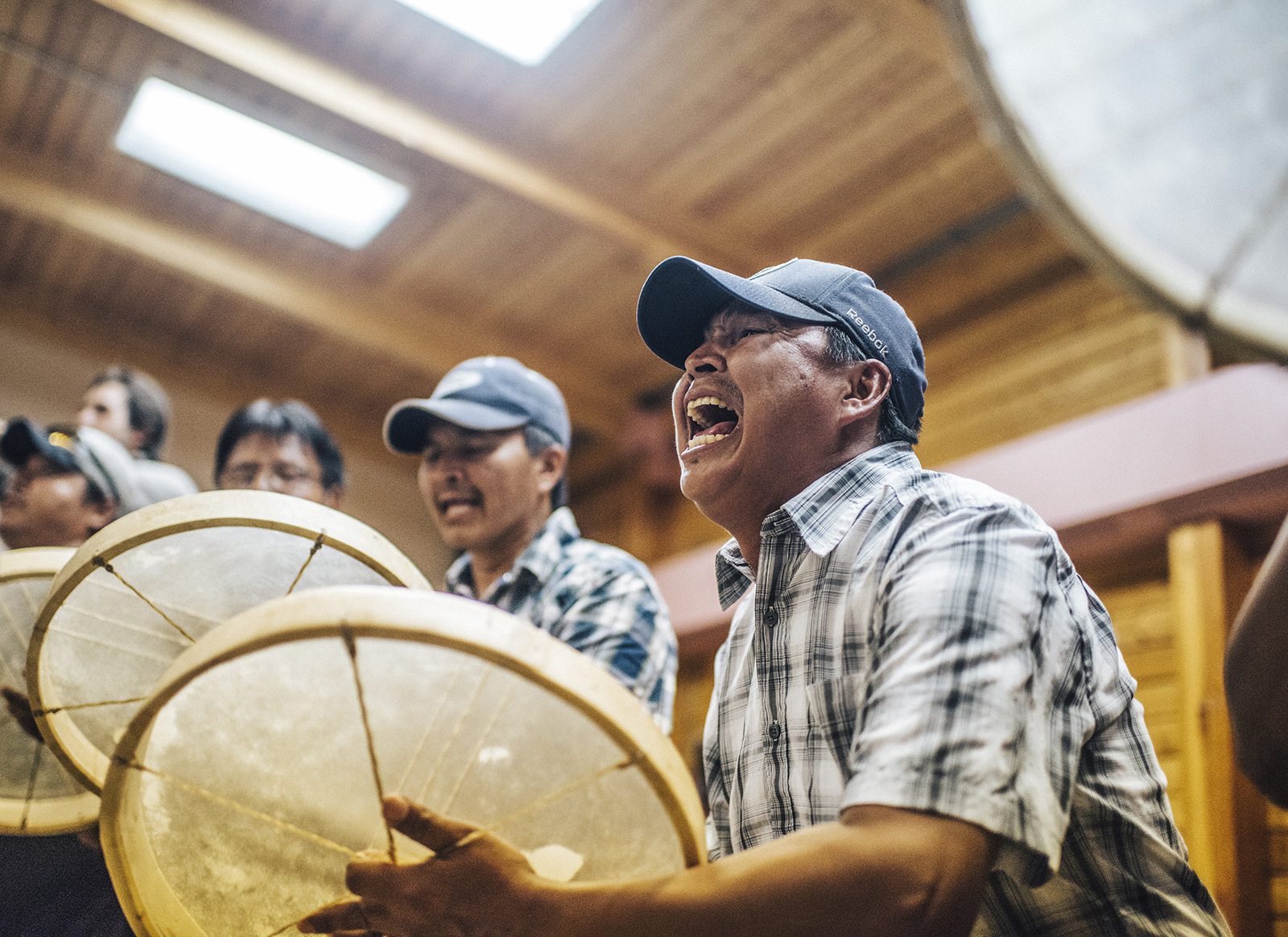 Steven Kallick, Pew’s director of international lands conservation, says Déline is ripe to formalize its role in Indigenous stewardship through a guardianship program that uses private and public money to hire locals as land managers.

Australia’s $100-million annual investment into its “smashingly successful” rangers program pays more than 700 Indigenous people, many of them youth, to manage their conservation lands, Kallick says. “It’s funny how Canadian governments, when they do invest in a park or a wildlife area, bring in non-Indigenous people from Toronto or Vancouver to work in these places. If you hire locals, you don’t have to teach them how to run a boat, how to stay alive if they run out of gas and the engine conks out. You can’t teach a lifetime’s worth of knowledge that kids have growing up in a community.”

That’s music to the ears of elder Leon Modeste, 83, who believes Déline must eschew large-scale development in favour of conservation jobs for Great Bear Lake to survive. But this is a resource-rich area; besides uranium, there’s coal, diamonds, iron, silver, copper and possibly oil and gas and gold deposits. The pursuit of any of these could spark the hot-button jobs-versus-the-environment debate. Modeste says climate change alone will bear tremendous pressures on Tudzé, the lake’s water heart. “It’s a gift to us to take care of it and it’s not even ours,” he says. “It’s for all people. Eventually a lot of people will come and we’ll offer our food, we’ll offer whatever we have, and we’re going to talk about how to respect it, how to honour it, how to keep it so it can sustain us for as long as it’s capable.”

This global outlook, with parallels to chemist James Lovelock and microbiologist Lynn Margulis’s famed Gaia hypothesis, has served Déline well as a guiding light toward a sustainable future, even though people here say the climate change apocalypse Ayah foresaw is inescapable. If they’re right, there’s at least some comfort knowing these expert conservationists have taken on the self-designated role of “water keepers ’til eternity” with such fervency, determination and heart.

Laurie Sarkadi lives near Yellowknife. Her first book, Voice in the Wild, is available now. Angela Gzowski is a photographer based in Yellowknife.