With an intimate knowledge of the lands and waters in their territories, First Nations are often the first on the scene in emergency situations — especially along the coast.

This week, the Government of Canada and the Heiltsuk Nation (near Bella Bella, B.C.) announced an agreement to enhance the Nation’s role in marine environmental responses to oil spills within its territory.

The Canadian Coast Guard, Transport Canada and the Heiltsuk Nation will develop a Marine Emergency Response Team pilot program to respond as a community to oil spills. As a pilot program, it will test concepts and add to future discussions for how to improve oil spill preparedness and response across the country.

"The Heiltsuk Nation has an obligation to take care of our territory, and this includes protecting it from oil spills,” says K̓áwáziɫ Marilyn Slett, Chief Councillor of the Heiltsuk Nation. “Developing a Marine Emergency Response Team is an important step towards fulfilling our vision of having full capacity to respond to pollution incidents in our territory."

A website, launched by Wildlands League and Oceans North, supports these efforts to protect the distinct seascape of the region. It asks for interested individuals and organizations to write letters of support not to the government, but to Grand Chief Jonathan Solomon, Deputy Grand Chief Rebecca Friday, marine manager Lawrence Martin and director of lands and resources Vern Cheechoo.

The website and pre-written letters of support specifically ask those who don’t live in the region to express their support.

“Even though I live far away from western James Bay and southern Hudson Bay in Canada, I support safeguarding the Mushkegowuk way of life, millions of migratory birds, thousands of belugas, walruses, wetlands of the Hudson Bay Lowland that have been cooling the world for thousands of years and much, much more,” reads the letter.

The Mushkegowuk Council is still in the process of signing an agreement with Parks Canada to put the project in place. 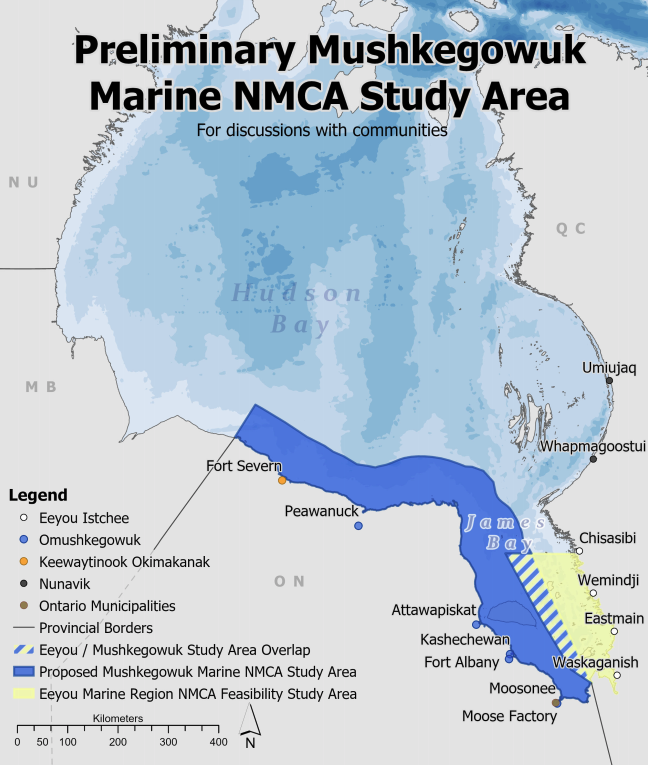 National Marine Conservation Areas are established by Parks Canada to represent, protect and conserve one of the 29 unique marine regions of Canada. These areas are managed and used in a sustainable manner that meets the needs of present and future generations without compromising ecosystem function.