Part of our Colour the Trails series
By Abi Hayward
January 26, 2021

Cassie Ayoungman knew from a young age that she wanted to work for her nation. Passionate about sport and fitness, she took a job at Siksika Nation and pitched her boss on setting up a series of fitness classes for the Siksika community. Then, after going to school to become a paramedic, and becoming a medic in the military, she discovered the outdoors: rock climbing in particular. Now Ayoungman is a mentor for other Indigenous youth and is encouraging people to think about the land they’re on when they’re outside.

Canadian Geographic spoke with Ayoungman about her work — and what she hopes to see for her nation, and Indigenous climbing, in the future.

On getting into climbing

I don’t know where the drive came from because my family didn't do many mountain activities.  I've been in and out of Calgary. I would move back to Calgary for school and then move back home. I would be away for military training every summer. But I think I just saw the mountains there and I was like: “I want to explore”. I found the outdoor life, and once I got out there, I wanted more.

I ended up meeting a friend who was into climbing. So I started with the basics, started indoor climbing. I never thought I would get into it. I thought, “Oh, it's too hard. I don't belong here.” Then all of a sudden I felt like I wanted more. I thought to myself, “OK, this is challenging. I like a challenge. Let's push it.” And I really found the passion since then. I found my mental state changing through climbing, and I knew I wanted to introduce climbing to my Nation as well. Everything I do, it's always related back to my community — I always want to bring something back. I'm the only Blackfoot person that climbs from my community, and I think maybe the second Indigenous person in Alberta to climb. I want to change that.

On the mentality of climbing

The outdoors is my therapy. Rock climbing has changed my mentality for the better. There's so many mental aspects to climbing. When I'm climbing, there are so many thoughts running through my head, “am I going to fall here?”. Trying to push yourself on the wall and coaching your breathing through it all. I'm definitely thinking differently about even day-to-day situations I come across — and I have rock climbing to thank for that. I want to show that to the youth in Siksika and other First Nations.

On climbing and being on Indigenous land

The more I climbed, the more I thought about being in relation to the land. I kept having more thoughts about where our ancestors were. Our native people roamed through these mountains as well. Our people have a spiritual connection to the lands. Now whenever I'm traveling either for climbing or mountaineering, I try to understand: “OK, who’s lands am I on?” We have pictographs and petroglyphs throughout the mountains in the Rockies here. I want people to understand that — those were our stories that were told on the rocks.

I actually put a poll up on my social media saying: “How much do you know about pictographs and petroglyphs?” And the responses that I got were “I want to know more. I don't know much about it.” First Nations told their stories on these rocks and they're disappearing over time because the oils on our skin ruin it by people touching them. So all in all, I've found l’m relating to the land more, learning more about myself, understanding… and just gaining more knowledge every year. 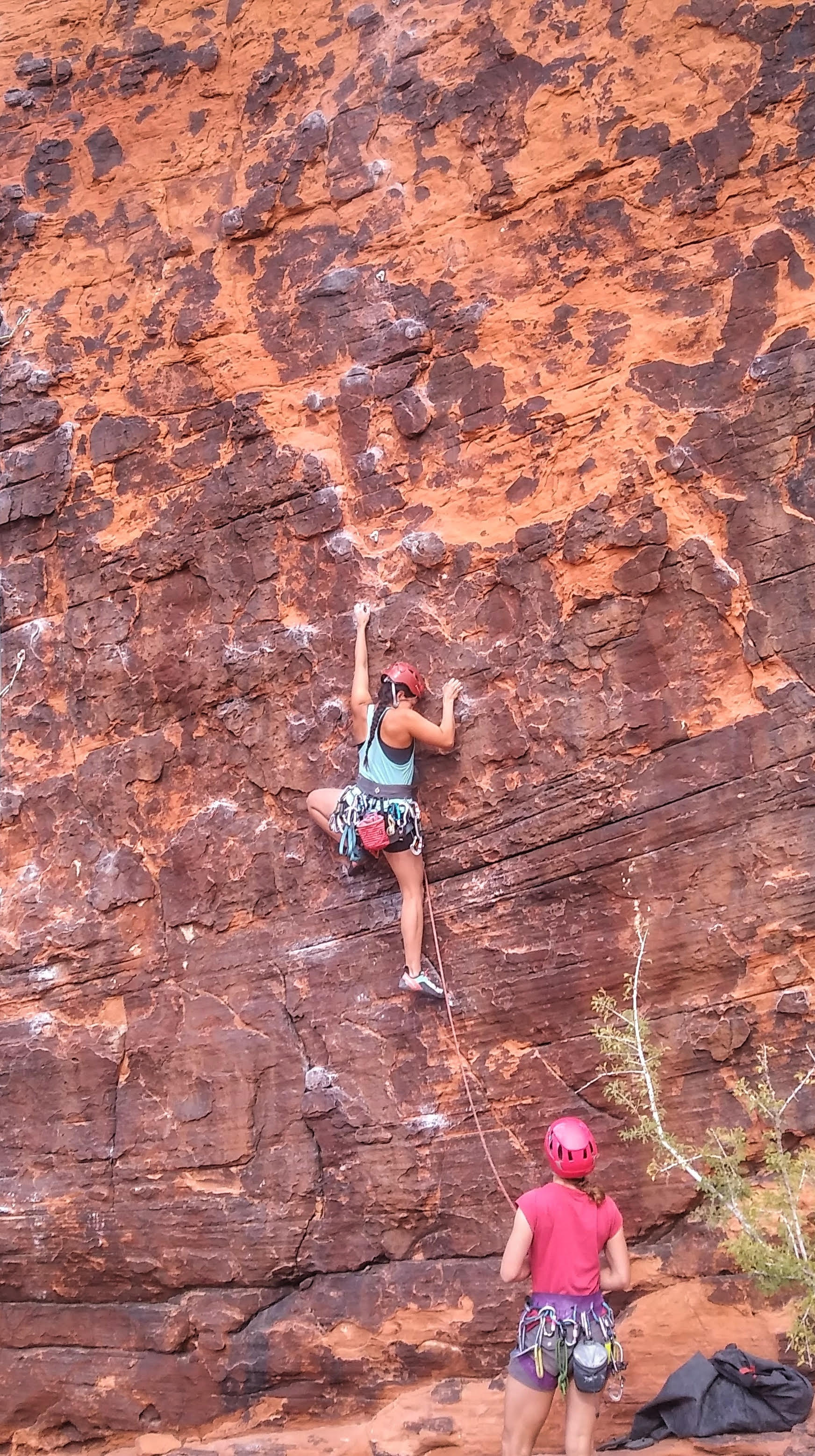 On the importance of mentorship

When I first started, my mentor was a good friend of mine. You want someone that you trust — especially with climbing. I also run a women's climbing page in Calgary. I found that women wanted to climb with other women, and so I created this group — that's where I met most of my climbing partners. Through there, I wanted others to find climbing partners and build those new “belaytionships”.

So it’s finding those mentors — and I want to be that for my community because I think that if it's someone coming from your own nation, you are going to be like: ”This is awesome, maybe this is something I want to pursue.” It's having that extra push. Having that person, someone that's willing to teach you, someone that has the experience …  I feel that it’s pretty important, especially coming from a smaller community.

On bringing climbing back to Siksika

I was working with some people in Siksika [last year] to create an introduction to rock climbing. I was responsible for organizing the facility and being a mentor. I have a good friend who was able to find the funding. He worked on that side of things. We collaborated and agreed on getting a group together. So we have a few youth — we call them the N7 Siksika group. They are some of the role models in Siksika. We wanted to give them the opportunity to try out climbing.

We were only able to get the older youth in for an introductory class. They were stoked on it. At first some of them were saying they were afraid of heights. I told them I was when I first started. It seemed like they were really enjoying themselves. They said they really liked it and they were hoping to go again. That's when our Covid cases went up and we had put that on hold. Hopefully when the cases go down in Siksika, we're going to try to pick that right back up again. I would love to just set up a top rope and get the kids climbing outdoors as well.

On the importance of Indigenous representation in the outdoors

If you're seeing someone of your own race or from your own Nation, I feel like it's going to have that spark — “She's done that; maybe I can try that out.” [But] I don't think we've seen any First Nation people competing in climbing right now. I can't speak for all First Nations across Canada, but I can speak from my experiences. We have a couple of role models in our Nation [in other sports] and we really look up to them.

If we're pushing these programs, even if we're changing one person's life or even two: that's change. It doesn't have to be drastic. It starts with small little changes and then going from there. And that's what we're seeing through our nation. Seeing more people out in the outdoor community is going to motivate more people. There's interest, it's just pushing them out the door and going for it!

On what she hopes to see in the future

I would love to see everyone giving acknowledgement to the land they're on. I'm seeing that more people are saying where they're skiing, hiking, climbing, biking. I want people getting out there exploring the land, even if it's just a nice little nature walk, understanding where our people roamed.