Initially targeted at visitors and locals in Tofino and Ucluelet, B.C., the CoastSmart program could save lives along all Canadian coasts
By Nick Walker
February 13, 2019

Randy Mercer recalls one winter day in 2016 in particular. A storm was raging, waves were piling onto Wickaninnish Beach and massive drift logs were floating around and being tossed back up onto the narrow strip of land — one of the most accessible beaches in west Vancouver Island’s Pacific Rim National Park Reserve. All the while, the paths onto the beach were like revolving doors for storm watchers. “I was out there just trying to wrangle people and keep them in the safe zones,” says Mercer, a Parks Canada visitor safety technician. “Of course, storm watchers visit for 10 minutes and leave, and then there’s a new bunch.”

That was when he realized the region was sorely in need of a way of transmitting information about coastal safety to people before they went out to marvel at storms from the very edge of the ocean — which can be an inherently unpredictable and dangerous place. Back in 2000, when Mercer moved to Vancouver Island from Newfoundland to work in Pacific Rim, storm watching was a barely budding industry, and Tofino and nearby Ucluelet were ghost towns in the winter. Now, he says, the national park beaches can be as busy during a winter gale as they are on a sunny summer day.

“People are coming from all over to do this, from Campbell River, B.C., Alberta, Japan and everywhere in between,” he says, “but nowhere along the way were they receiving information about how they should be doing it safely. There had to be a better way to educate visitors.”

Led by Mercer, Pacific Rim secured federal funding, brought together the districts of Tofino and Ucluelet and partners such as the local Tla-o-qui-aht First Nations, tourism associations and businesses for input, and performed risk assessments of all 17 public-access beaches between the towns. In 2017-18, they piloted CoastSmart — the first coastal safety program of its kind in Canada — with the mandate of “enhancing coastal safety along the shoreline and in the surfzone” through a concerted communication and education campaign. 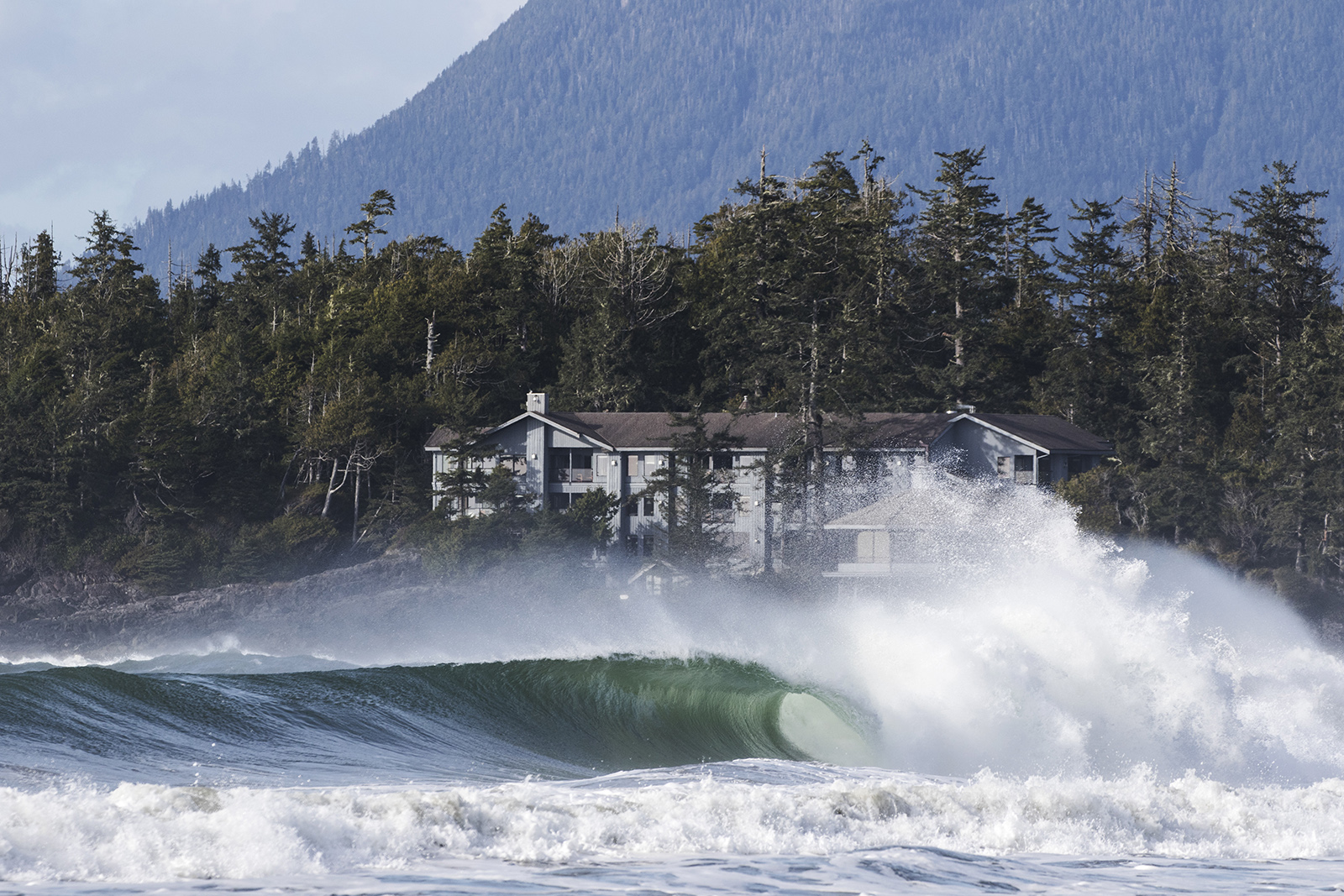 The birthplace of storm watching

Tourism in Tofino and the Clayoquot Sound region has been surging since the mid 1990s, when local hotelier Charles McDiarmid built the Wickaninnish Inn on family land a few beaches north of Pacific Rim National Park Reserve. The resort established Tofino as a world-class eco-tourism destination, but McDiarmid’s decision to promote it for the winter storm-watching experience is what made the town a year-round draw.

“Storm season [November to March] really took on a life of its own,” he says. “As occupancy rates go, the winter truly carries its own.” Between 2016 and 2018, Tourism Tofino reported a 17 per cent increase in hotel bookings for the month of February alone.

More than a million tourists now come to this tiny piece of Vancouver Island coast each year, so the need for a consistent coastal safety program is hardly limited to the winter months. Whether they come for the pounding winds and storm surge, to surf Tofino’s legendary waves, stand-up paddleboard, hike seaside trails, go bear and whale watching or fishing, visitors are usually interacting with the tidal zone in one way or another.

Mercer’s experiences with storm watchers and other visitors to the beaches and oceanside trails of Pacific Rim National Park Reserve led him to confront the fact that as more and more tourists were coming to Clayoquot Sound every year (few with practical experience in ocean environments), safety measures were not developing apace.

Injuries and deaths due to surfing and swimming accidents make the news every year in Tofino. It’s believed the last time a person was fatally swept into the ocean from land was in 2008, when seven-year-old William Pilkenton, on a family holiday from Washington State, disappeared from shore while his father’s back was turned. Local beaches are wild, long and unsupervised, and sudden powerful waves and rip currents can catch recreationalists off guard.

In January 2018, Tofino was struck by one of the most powerful storms of the decade: Environment Canada clocked winds of 108 km/h and storm swells were estimated at up to nine metres. When the tempest had subsided, Mercer was relieved to discover that no accidents had been recorded — despite multiple tourists posting footage of waves crashing toward them in the “death zone” on beaches, or standing on wet, rocky outcroppings barely out of reach of storm swells.

There will always be people who choose to forego safety precautions to snap the best picture or for a thrill, but many more will benefit from consistent signage and emergency systems at every beachfront and, perhaps most importantly, education at every step — in the airports, through hotels and local business owners. A brief exposure to tips about how to escape rip currents (the reason for 80 per cent of all surf rescues), how to avoid getting stranded by incoming tides or how to maintain a safe distance from storm waves can make the difference between an enjoyable visit and a disaster. “By the time people get to the beach,” says Mercer, “they should have been hit with this information already, and they should not have seen advertisements and other imagery showing people standing on wet rocks at the edge of the sea.”

To that end, establishments like the Wickaninnish Inn are CoastSmart members, changing their beach signage and running guests through the steps of storm-watching preparedness before they strike out into hurricane-force gusts and rain in head-to-toe yellow-rubber gear. McDiarmid himself is a CoastSmart “ambassador,” as are other local business owners and celebrities such as pro surfer Pete Devries and Surf Sister surfing school owner Krissy Montgomery. It all comes down to paying attention to — and not underestimating — the coastal environment, says McDiarmid: “If you have great respect for the ocean, you will be safe.” 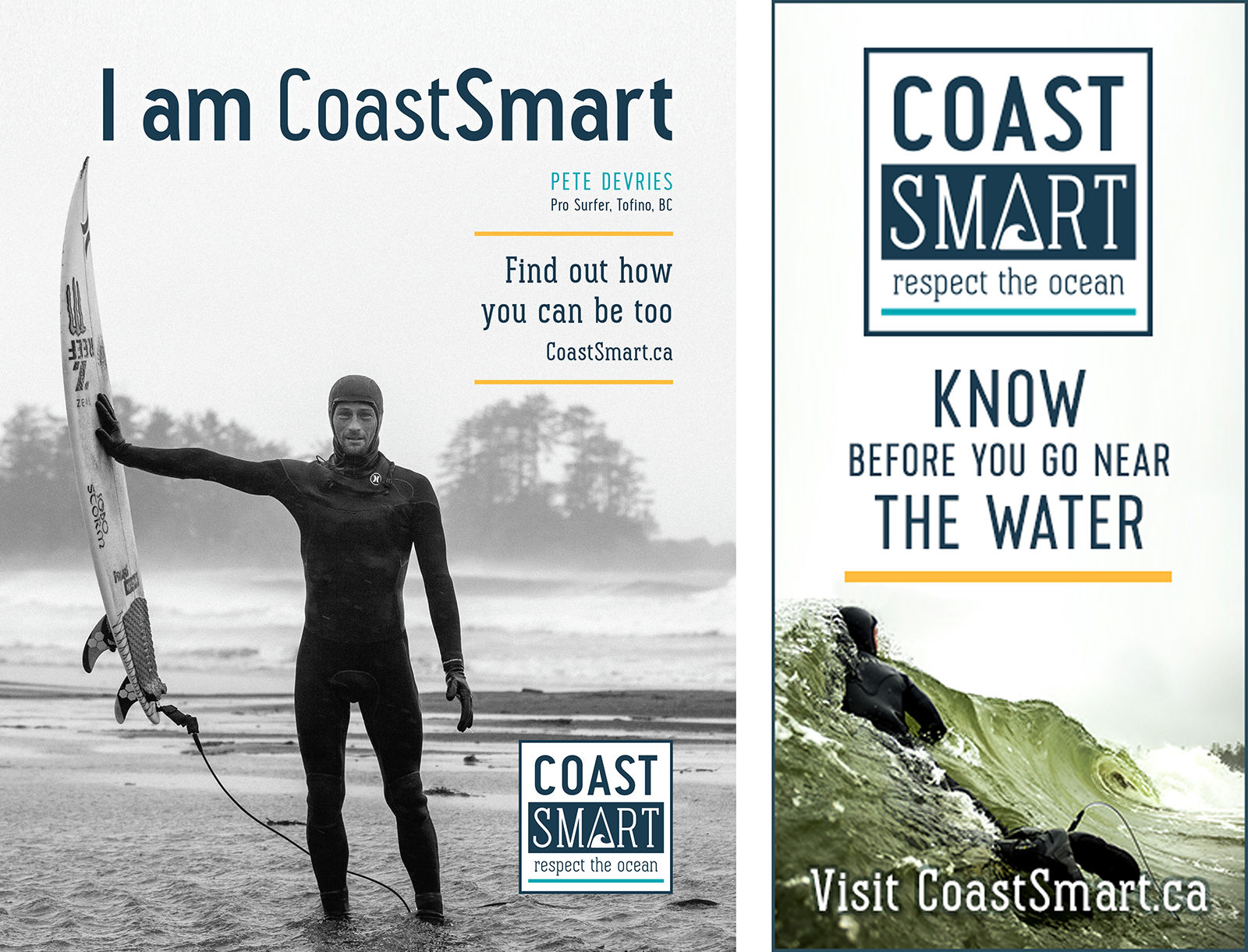 Early on, Mercer looked for a regional Canadian coastal safety program that he could build on, but found nothing (even the signage between Tofino and Ucluelet was wildly inconsistent). Canada implements standardized safety measures for boating, but not for shoreline recreation. So he looked to Australia, which has a much longer history of coastal recreation than Canada. He found uniform signage on beaches across Australia, well-funded and marketed education and outreach programs, and extensive safety networks made up of participating accommodation providers and other industry groups. The program has already been adapted elsewhere, in the United Kingdom and Ireland as a “coastal drowning prevention campaign” called Respect the Water.

The model developed at Pacific Rim can be molded to fit the needs of other coastal areas in Canada. Indeed, the hope is that eventually, beaches and trailheads in Nova Scotia or Newfoundland will display the same kind of signage.

Ocean and coastal recreation is a relatively new development in many parts of seaside Canada and the Great Lakes. It could take 10, 15 or 20 years, says Mercer, but the precedent CoastSmart is setting on the West Coast could eventually be educating recreationalists and preventing injuries and deaths across coastal Canada.

“In Tofino, storm watching is only as old as the Wickaninnish Inn; even the surfing culture here is only a few decades old,” says Mercer. “These kinds of cultural shifts take time.”

To learn about coastal safety and for access to resources such as a CoastSmart quiz and presentation guides for participating tourism providers, visit coastsmart.ca, or download the app by searching “CoastSmart” on Google Play and the Apple App Store.