The Boreal to Barrenlands Expedition, funded by The Royal Canadian Geographical Society, returns from their summer slog through northern Quebec and Labrador
By David Greene
September 13, 2019

If the first day of our 840-kilometre expedition through the wilderness of northern Quebec and Labrador was any indication of how the rest of it would go, we were surely fooled. We set our canoes in the water by train tracks at Menihek Landing, just north of Labrador City, on a day that remained as clear and calm as it was when the sun first broke the horizon. With all the enthusiasm four excited young men could muster, we fired out of the gate and glided over a cool 54 kilometres by dinner — little did we know that this would be the longest distance we would travel on any day during our month-long expedition this summer. That first evening around the campfire, with the sunlight fading, the sky grew overcast and rain began to fall. And the rain continued almost daily for the rest of the trip.

Labrador and, particularly, the Mistastin River watershed, including the rarely-paddled Mistastin Lake (the site of an ancient meteor impact), is one of Canada’s last remaining wilderness frontiers, and we hoped to gain cultural and environmental insight by traversing it and documenting it through photography, a documentary film and the written word. 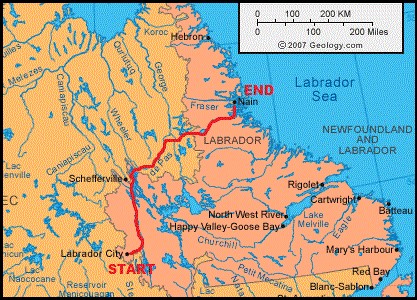 One day was particularly memorable. We had to traverse a tricky 14-kilometre stretch of black spruce bog, rivers and boulder fields, that appeared as lakes on our maps, in the pouring rain and temperatures hovering around 7 C. At one point we were all standing on boulders in a river, shivering and wondering, “How are we ever going to get through this?” But we had no other route to get to Lac Machault, Que., near the Quebec-Labrador height of land, the border between two watersheds (one draining to the Atlantic Ocean and the other to the Arctic Ocean). So we kept going, dragging our boats filled with gear for hours. By the end of that day, we were thoroughly wiped, but we had made it.

Under grey skies, we portaged, paddled, lined, tracked and grunted our canoes from one watershed to another, moving from Labrador into Quebec to the Rivière De Pas, where we portaged overland to Rivière George. Further on we portaged to the headwaters of the Rivière Dumans, through a series of shallow lakes back to the Quebec-Labrador height of land and finally beginning our downward slide to the Atlantic Ocean via the Mistastin River watershed in Labrador.

Though this section of the Mistastin River was only six kilometres long, it took us two whole days to negotiate. The river tumbles over 300 metres in what can only be described as a series of unrunnable rapids and waterfalls. We encountered tricky portage after tricky portage, often shouldering our loads for frustratingly long distances just to find places where we could lower our boats down cliffs and back into the water. Though it was a slog, the payoff was incredible. We witnessed two sets of spectacular waterfalls, cascading more than 45 metres, last seen by paddlers Herb Pohl and Pat Lewtas nearly 20 years ago. It was a truly magnificent landscape, and we spent hours wandering through it, absolutely speechless. 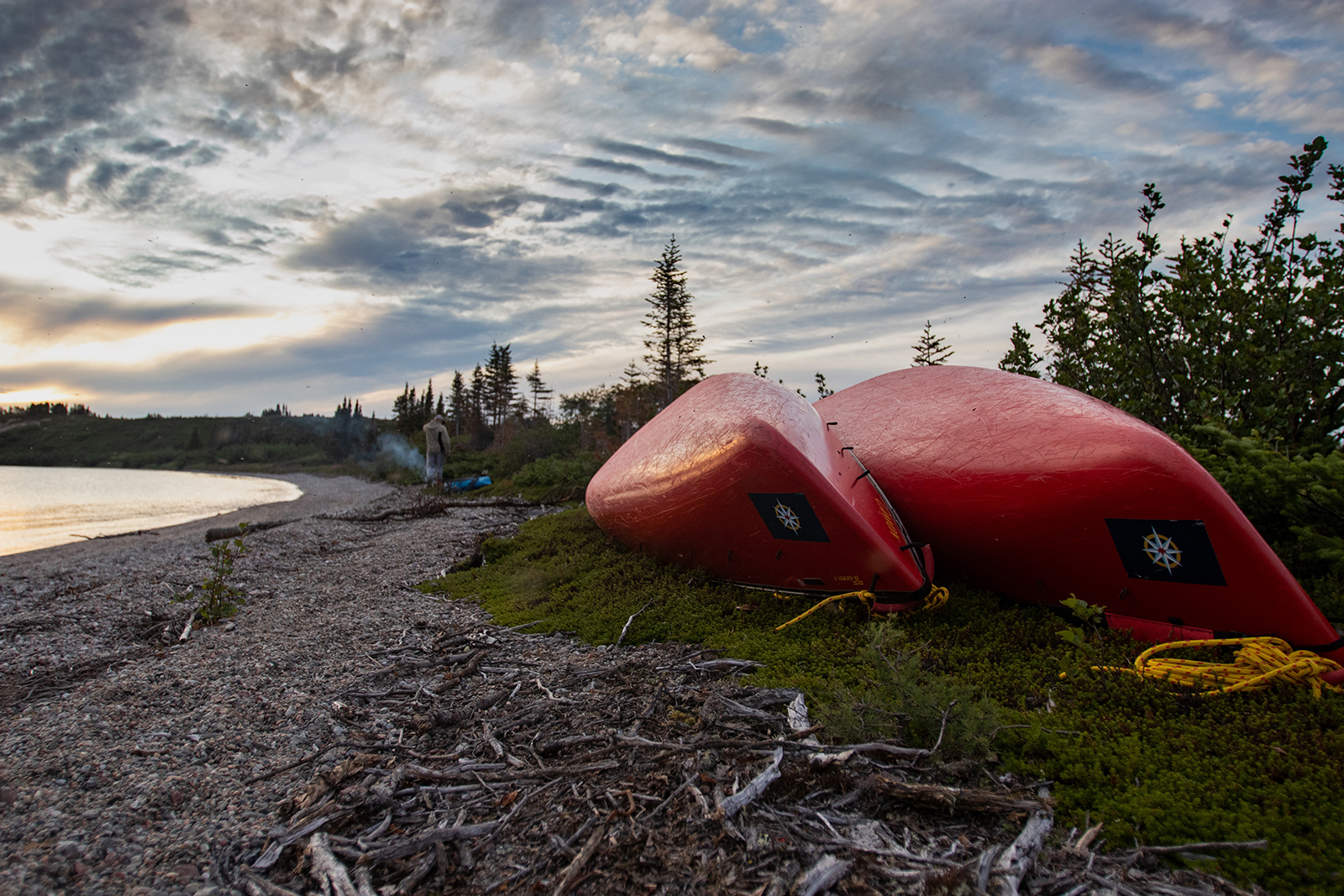 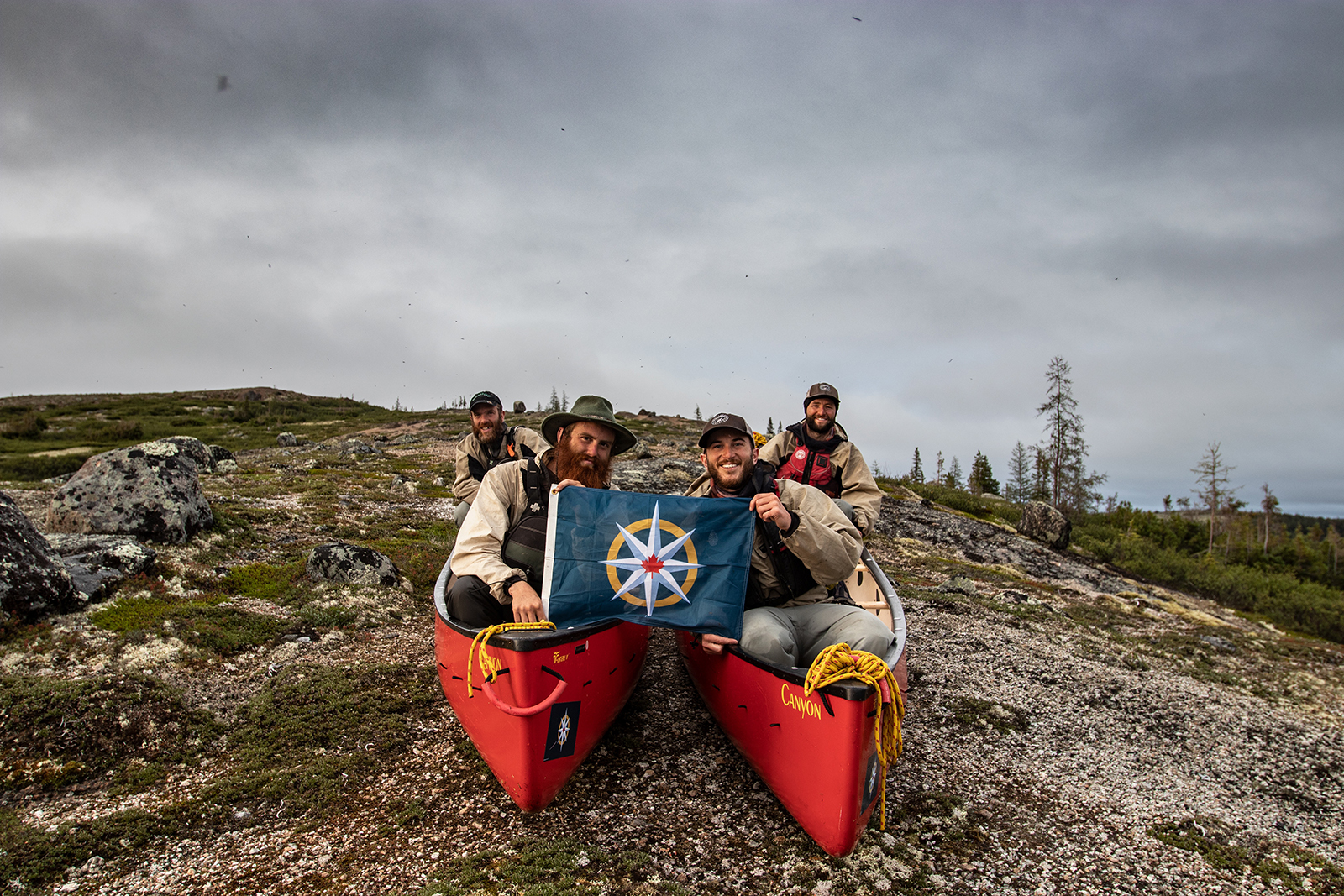 The team poses at the Quebec-Labrador height of land. (Photo: Alex Traynor/Northern Scavenger)

Though we didn't plan any rest days into our expedition, we ended up taking five-and-a-half days to recouperate towards the end of our trip. Despite that, after 35 days on the water and right on schedule, we completed our Boreal to Barrenlands expedition in Nain, the most northern community of Labrador. With considerable effort, our team traversed northern Quebec and Labrador by canoe through areas that are unknown to most Canadians and the world. With a huge sense of relief, we stepped out of our boats, had a round of hugs and high fives, and headed straight to the Northern Store for all the chocolate milk we could handle.

The Boreal to Barrenlands team included David Greene, Noah Booth, Alex Traynor and Chris Giard. Watch their YouTube channel for updates on the documentary and a web series launching in the next month. For more stories and photos of the expedition, follow @NorthernScavenger and @GreenerAdventures on Instagram.