Researchers are shedding new light on northern food webs and environments by connecting disciplines and local knowledge — even by using different ships
By John Bennett
November 11, 2016

Arctic ecosystems, the intricate webs of life that connect microscopic organisms at one end to whales, polar bears and humans at the other, are not well known to science. In fact, most haven’t been studied at all. There’s an urgent need to understand these ecosystems, says Eddy Carmack, an emeritus oceanographer with the federal Department of Fisheries and Oceans, so that Canada can protect environmentally sensitive areas and manage its northern environment responsibly. Carmack is working with scientists from Canada, the United States and Norway to build that understanding.

The research team, supported in part by Polar Knowledge Canada, works in a stretch of the Northwest Passage between Coronation Gulf and Chantrey Inlet, Nunavut. “We chose it partly because of its southern location,” says Carmack. “It’s warmer than the other parts of the Arctic Archipelago, so any changes there may signal changes coming to other regions of the Arctic.” But even more importantly, he says, its marine ecosystems are surrounded by large watersheds with rivers emptying a tremendous amount of fresh water into them. This affects the biology and the circulation of the whole system.

Understanding what those rivers bring into the ocean, and when, is crucial, and it takes scientists with widely different areas of expertise. “The watchword is connectivity,” Carmack explains, “connectivity between the ocean and the surrounding watershed and with the Pacific Ocean, as currents drive Pacific water into and through the area; and connectivity between scientific disciplines, the physical oceanographers, chemical oceanographers, and biologists we have on our team.”

Similarly, Inuit expertise is essential to Carmack’s work. This year, he and his colleagues looked at areas that remain ice-free all year because of strong tidal currents. Inuit know these places — ranging in size from a few kilometres across to about the size of a swimming pool — as good seal hunting areas during the ice season.

Early research results suggest that there is generally much richer biodiversity in these small polynyas than in the surrounding areas, perhaps because currents mix up large amounts of nutrients and carry plankton past benthic (bottom-dwelling) animals. To help confirm their hypothesis, the team is examining these creatures, such as sea anemone and clams, which filter food from the water as it flows by, and whose bodies can record decades of changes in the local environment. 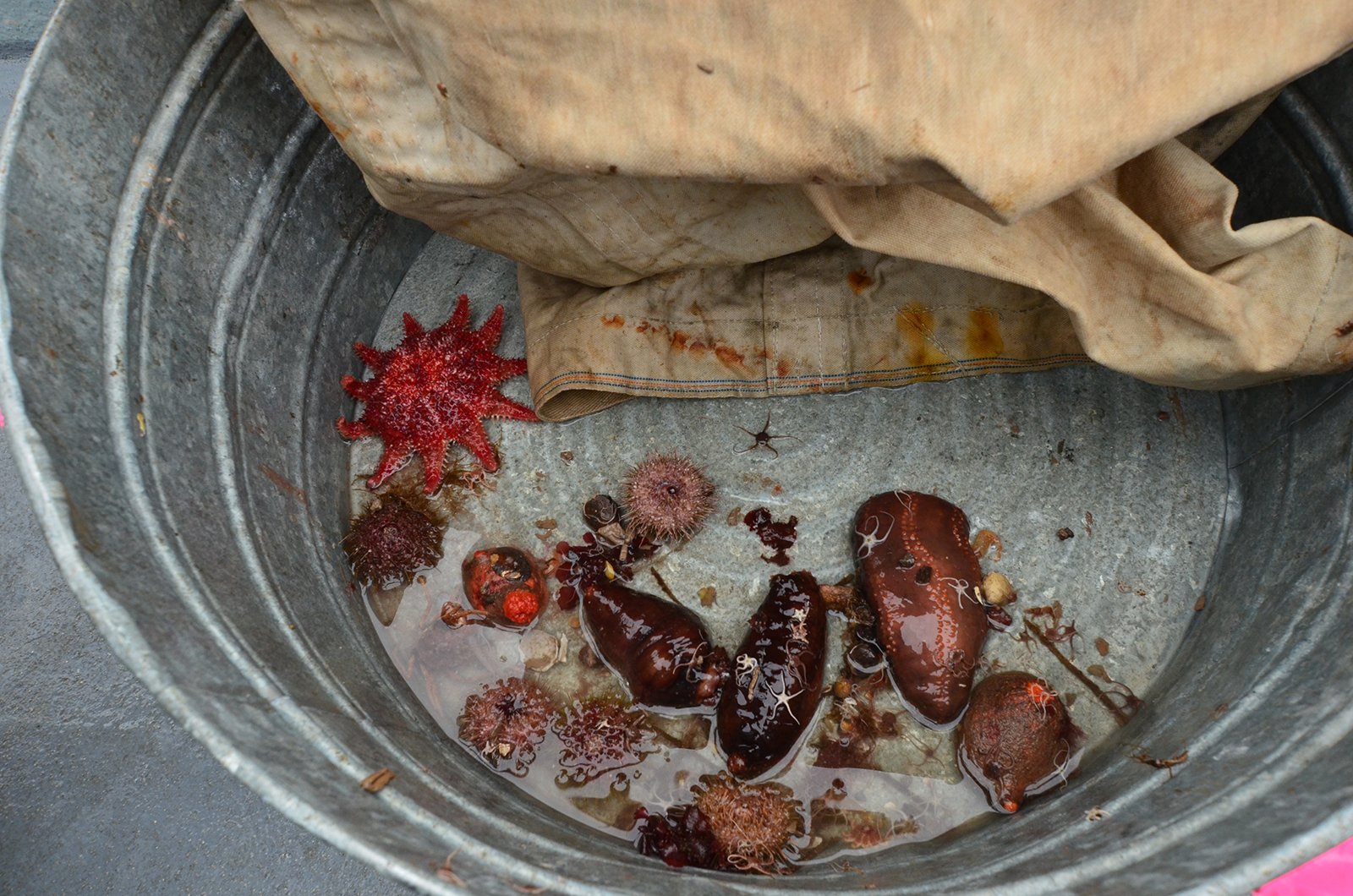 A collection of some of the bottom-dwelling organisms — sea stars and urchins among them — that Carmack and his team are studying to learn more about how their Arctic environment has changed in recent decades. (Photo: Adrian Schimnowski)

The importance of small vessels

While most Arctic oceanographic studies take place from large research icebreakers, this research uses the Arctic Research Foundation’s MV Martin Bergmann, a converted trawler. “Large icebreakers can’t navigate in some of the Arctic’s uncharted and shallow areas,” Carmack points out. “We think an important path to follow into the future is to put modern scientific equipment on smaller vessels that are far less expensive to operate and allow probing into unknown regions. It’s quite amazing what we can do on this little 20-metre boat.”

Unlike a large ship, a small vessel can easily change its route to take advantage of an unexpected opportunity. In September 2016, the Martin Bergmann’s crew changed course to visit an area where Inuit hunter Sammy Kogvik, who had come aboard, mentioned he had once seen a ship’s mast protruding from the ice — and it was there that they made news around the world by discovering the wreck of Franklin’s long lost HMS Terror.

Carmack hopes to outfit more small vessels, even the small motorboats favoured by Inuit hunters, with scientific equipment. “I call it fish-boat science,” he explains. “The smaller vessels will allow researchers to spread out and work with local experts from communities across the arctic. That will help bring the deeper understanding, of many different ecosystems, that we need to manage our Arctic waters responsibly.”