Harnessing the power of nature to fight climate change

When it comes to reducing greenhouse gas emissions, habitats themselves can be critical allies
By Brian Banks
June 30, 2020

The 2019 federal election campaign might have been the first time that many Canadians heard the term “natural climate solutions.” It came in a pledge by Prime Minister Justin Trudeau to invest $3 billion in those solutions to “conserve and restore” lands across the country as part of the government’s platform to fight climate change.

If you were one of the uninitiated, rest easy. Among policymakers, awareness that land conservation is one of the most powerful and economical tools available for reducing greenhouse gas emissions has only recently caught hold.

An important catalyst was a 2017 study that found natural climate solutions — defined as the practice of avoiding or sequestering carbon emissions by conserving, restoring or better managing forests, grasslands, wetlands and agricultural lands — can deliver more than one-third of the global reductions needed by 2030 to prevent dangerous levels of global warming.

Three years on, awareness of this potential and momentum to start applying it is building fast. In February, just before COVID-19 hit Canada, more than 400 conservation, government, private sector and Indigenous leaders held a summit on the topic. Their goal: mobilize government and other actors to move this work forward to help meet the country’s climate goals.

“There’s huge potential for nature-based climate solutions,” says Amanda Reed, director of strategic partnerships at Nature United and one of the summit organizers. She cites three reasons: Canada’s boreal forests, West Coast rain forests, nothern peatlands and coastal wetlands store huge quantities of carbon and take in more every year; our existing frameworks and political will to act on climate; and the fact that many areas with the greatest carbon mitigation potential are in the hands of Indigenous communities with a wealth of knowledge in stewarding lands and waters.

The appeal of natural climate solutions doesn’t stop at greenhouse gas mitigation, however. That’s because they also provide many “co-benefits.” Foremost among them: protecting habitat and biodiversity, the second great ecological emergency of our time. Other co-benefits include cleaner air and water and healthier soils; landscapes that are more resilient to climate change and natural disasters; support for sustainable industries and jobs; and enhanced social and recreational amenities.

Where does the work on natural climate solutions in Canada go from here? An important next step is determining Canada’s specific mitigation potential. This includes calculating what overall percentage of our carbon reduction budget can be met with natural climate solutions, as well as identifying which actions — such as improved forest management or grassland restoration — in which locations promise the highest, most cost-effective impact.

To help point the way, 16 public, non-profit and university institutions, including Nature United, just finished a study that is due to publish this fall. The study isolates around two dozen specific actions, or “pathways,” and, according to Reed, “will be the first to aggregate the potential reductions in land-based emissions” from forests, grasslands, wetlands and agricultural lands across Canada.

The research factors in uncertainties, such as the impact of wildfires, and includes safeguards that rule out carbon initiatives that would have severe negative impacts on biodiversity or local communities. The ultimate goal, says Reed, is “real data” that policymakers can trust and invest in. 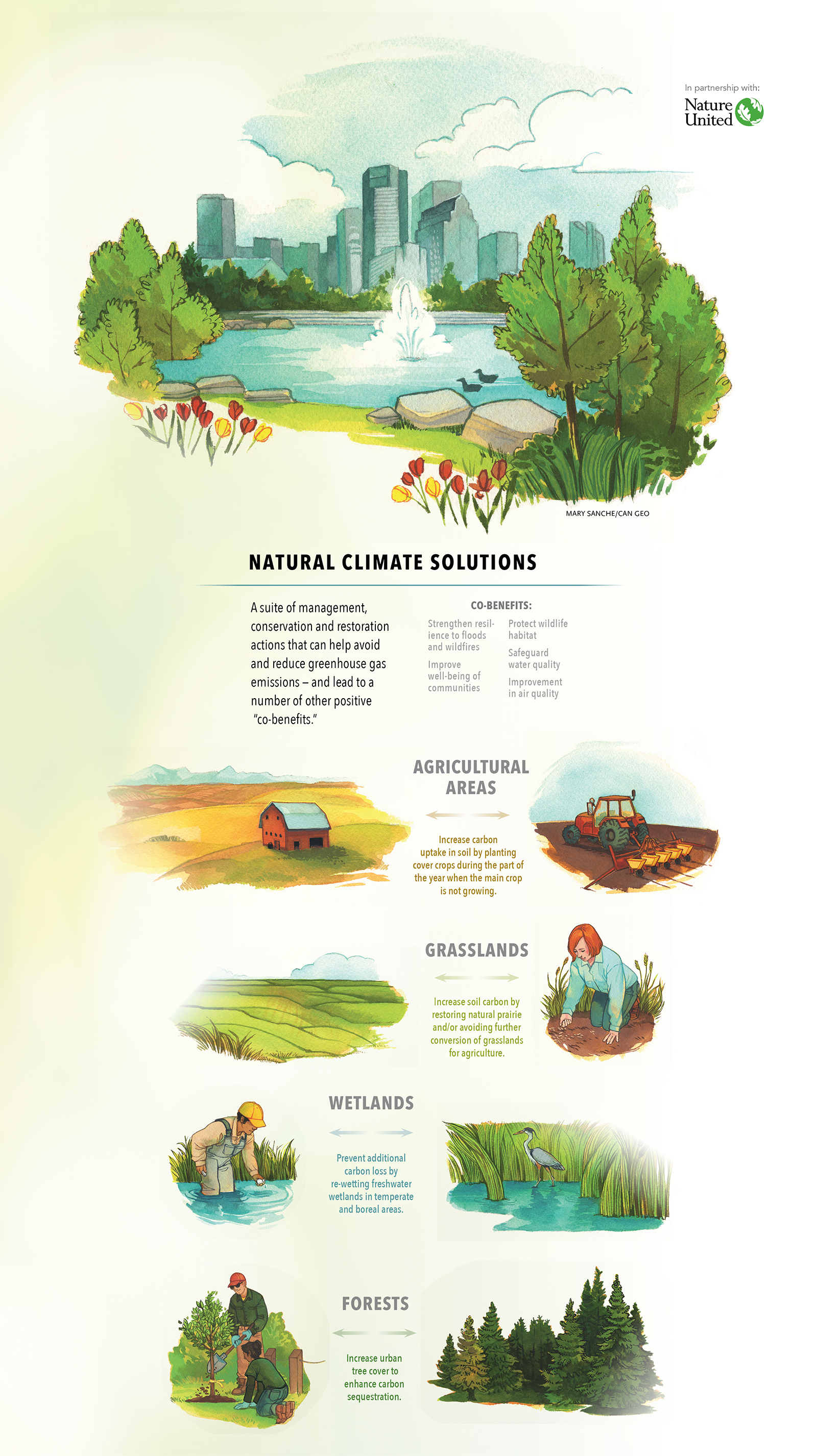 This is the first in a series of infographics dedicated to exploring natural climate solutions. Watch for the next one in the September/October 2020 issue of Canadian Geographic magazine, available everywhere August 24.