First Nations, Métis and Inuit leaders gather on Parliament Hill for the launch of the Indigenous Peoples Atlas of Canada's Giant Floor Map and teacher's guide, now available across the country
By Kiley Bell
October 23, 2018

A tray of traditional bannock bread was passed among a crowd of people gathered on Parliament Hill’s lawn for one unifying purpose — to share in the personal, often untold, stories of Indigenous Peoples in Canada. The event, hosted by Niagara Centre MP Vance Badawey on behalf of Liberal Indigenous Caucus, celebrates the launch of Canadian Geographic’s Indigenous Peoples Atlas of Canada’s teacher's guide, now available to educators country-wide.

“A key to a better Canada lies in forging stronger relationships with Indigenous Peoples,” said MP Badawey, opening the event. “It is my hope that this atlas will help build multicultural understanding, encourage dialogue, and most importantly, foster mutual respect between all Canadians.”

The Atlas, a first-of-its-kind four-volume educational resource, and its accompanying Giant Floor Map, were created by The Royal Canadian Geographical Society in partnership with the Assembly of First Nations, Métis National Council, Inuit Tapiriit Kanatami, the National Centre for Truth and Reconciliation and Indspire. The complementary teacher’s guide, produced alongside the Atlas and the Giant Floor Map, offers more than 170 pages of activities and lesson plans for classrooms to explore the unique histories, cultures and perspectives of First Nations, Métis and Inuit in Canada. 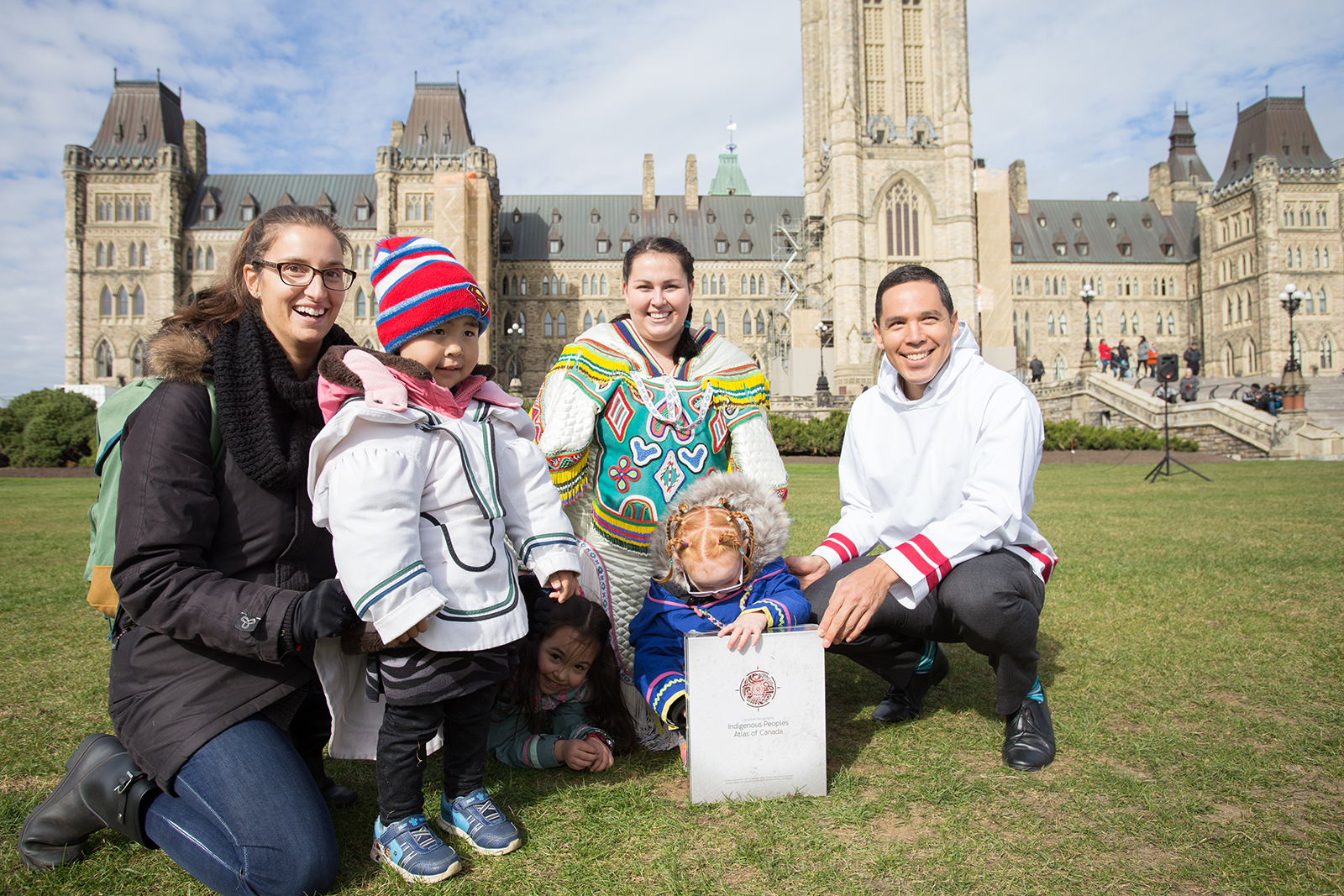 “We always say education is at the base of everything,” said the Hon. Pablo Rodriguez, minister of Canadian heritage and multiculturalism. “We will continue to work with Indigenous partners to make sure their voices are heard and their stories are told. Reconciliation with Indigenous Peoples is not an ‘Indigenous issue’ — it is a Canadian issue. It is something that concerns us all.”

As a backdrop for the launch, the Giant Floor Map covered the Hill's lawn, giving the public a chance to walk across a Canada they may not normally recognize. The map, roughly half the size of a school gymnasium, doesn't include colonial provincial and territorial boundaries, but rather, showcases Indigenous Canada. Rodriguez was joined by distinguished guests Métis National Council President Clément Chartier, Inuit Tapiriit Kanatami President Natan Obed, the Assembly of First Nations’ Valerie Galley and MP Robert-Falcon Ouellette, who mingled with attendees on the map, sharing stories from their homelands. 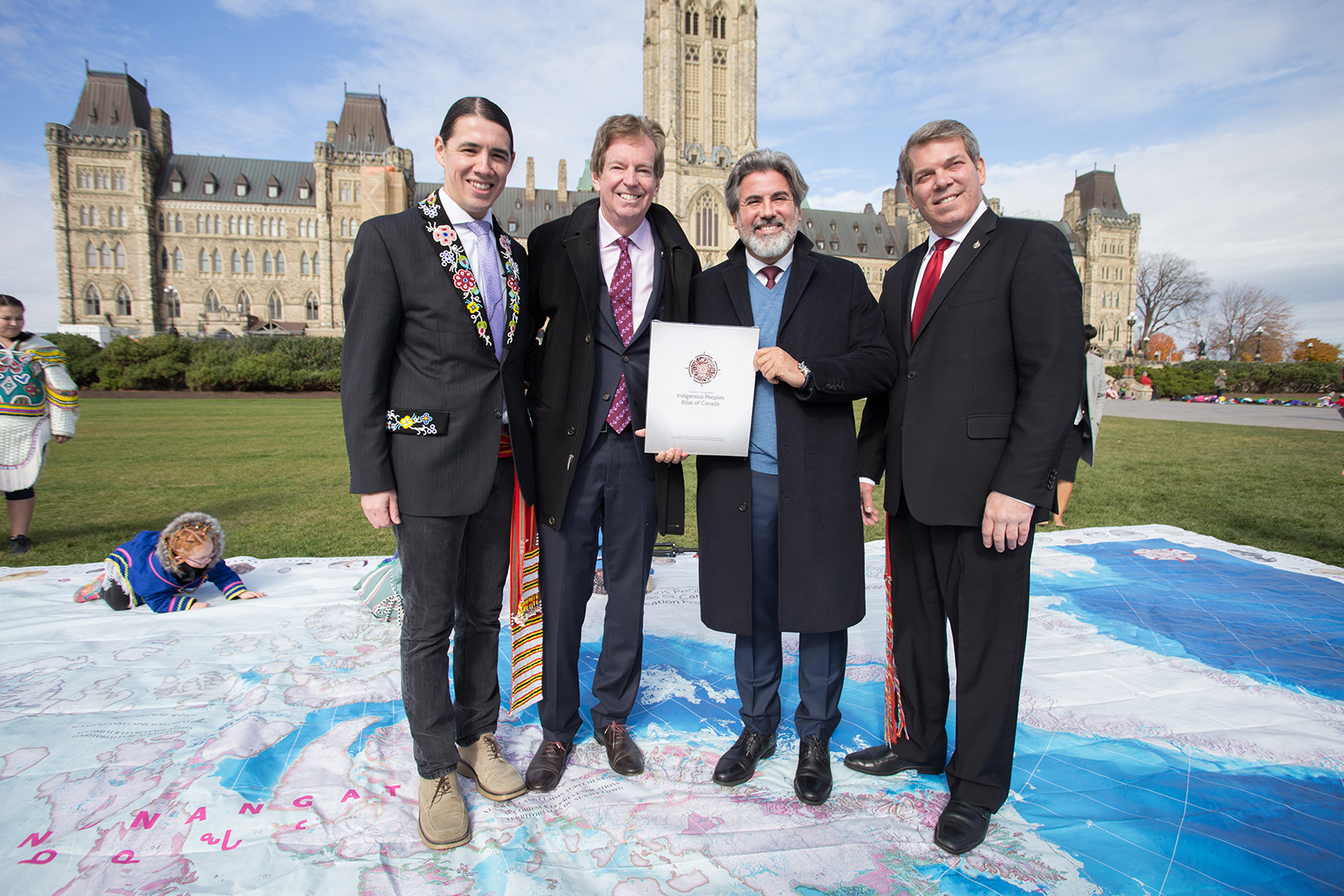 To close the event, President Obed presented a copy of the Atlas to the Ottawa Inuit Children’s Centre, an organization that fosters children’s well-being and strength in an Inuit environment. “We have many Inuit who live in Ottawa. One of the organizations that do amazing work serving Inuit is the Ottawa Inuit Children’s Centre. I give this to our youngest participants today,” said Obed, handing the Atlas to a group of young children from the centre.

Since its launch last June, the Indigenous Peoples Atlas of Canada has sold 8,000 copies, and the Giant Floor Map has sold 30 copies across Canada. With the launch of the accompanying teacher's guide, the magnitude of this project is still growing. “In the history of The Royal Canadian Geographical Society, I don’t think we’ve ever tackled a project as important and ambitious as this one,” said John Geiger, CEO of the RCGS. “It changes the narrative in respect to the Society and it will have an enormous impact in classrooms across Canada. I’m proud to work with our incredible Indigenous partners. These are their stories; these are their voices.”