The Royal Canadian Geographical Society has been celebrating Canada since 1929 — and now you can celebrate the Society’s 90th anniversary in style.

Over nine decades, Canada’s foremost explorers have been elected RCGS Fellows, many of whom have literally put aspects of Canada’s geography on the map. From the great navigators  captain Joseph-Elzéar Bernier and RCMP Henry Larsen to polar legend Vilhjalmur Stefansson and astronaut Roberta Bondar, these individuals have defined Canada’s history.

To celebrate its 90th and to support its programs, the RCGS has partnered with Roots Canada to create — for the first time — expedition patches for some of these nation-building expeditions. (Bondar’s flight patch for her mission aboard the space shuttle Discovery was recreated here with her permission and that of the Canadian Space Agency.)

The other patches, capturing the essence of history-making expeditions, were designed for the RCGS by leading Canadian design firm Strut Creative. The seven patches are being used for the first time on the limited-edition RCGS x Roots expedition jacket. Only 90 numbered jackets are being produced.

“At the same, funds raised from the sale of the jackets helps support the Society’s vital educational, expedition and research programs, prompting interest and knowledge in our country and inspiring a new generation of Canadian geographers, scientists and explorers.”

The jackets feature the RCGS Compass Rose, a globally-recognized symbol of geography and exploration, together with expedition patches for the following: 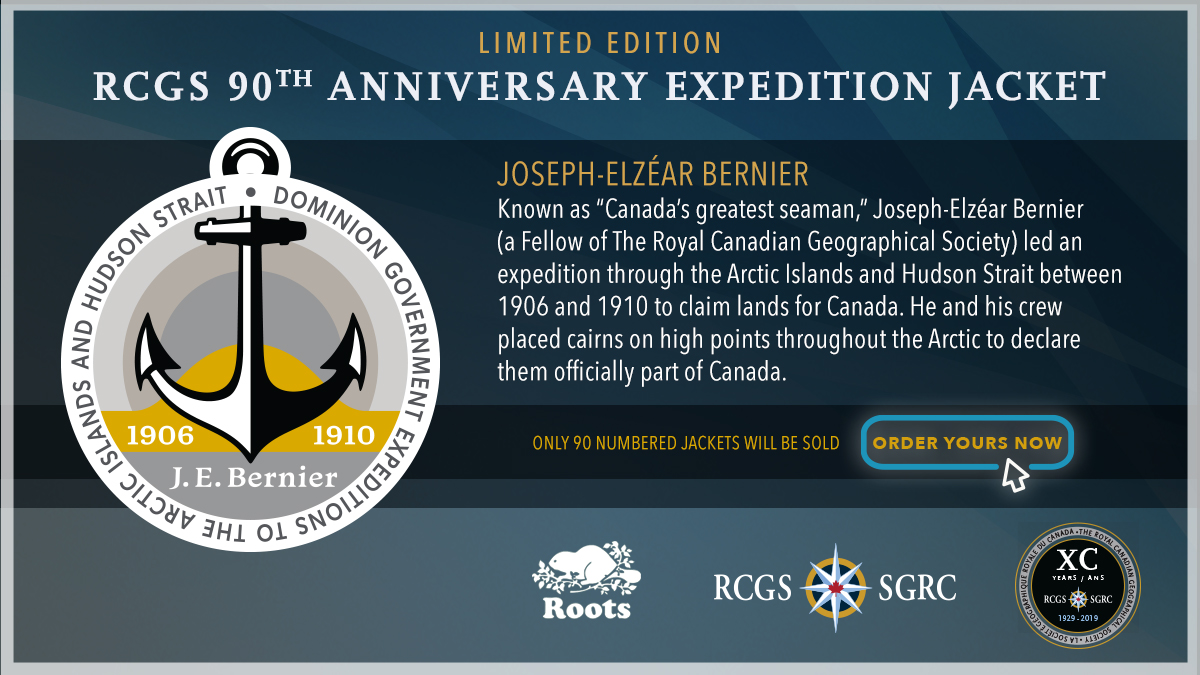 Joseph-Elzéar BERNIER
Known as "Canada's greatest seaman," Joseph-Elzéar Bernier (a Fellow of The Royal Canadian Geographical Society) led an expedition through the Arctic Islands and Hudson Strait between 1906 and 1910 to claim lands for Canada. He and his crew placed cairns on high points throughout the Arctic to declare them officially part of Canada. 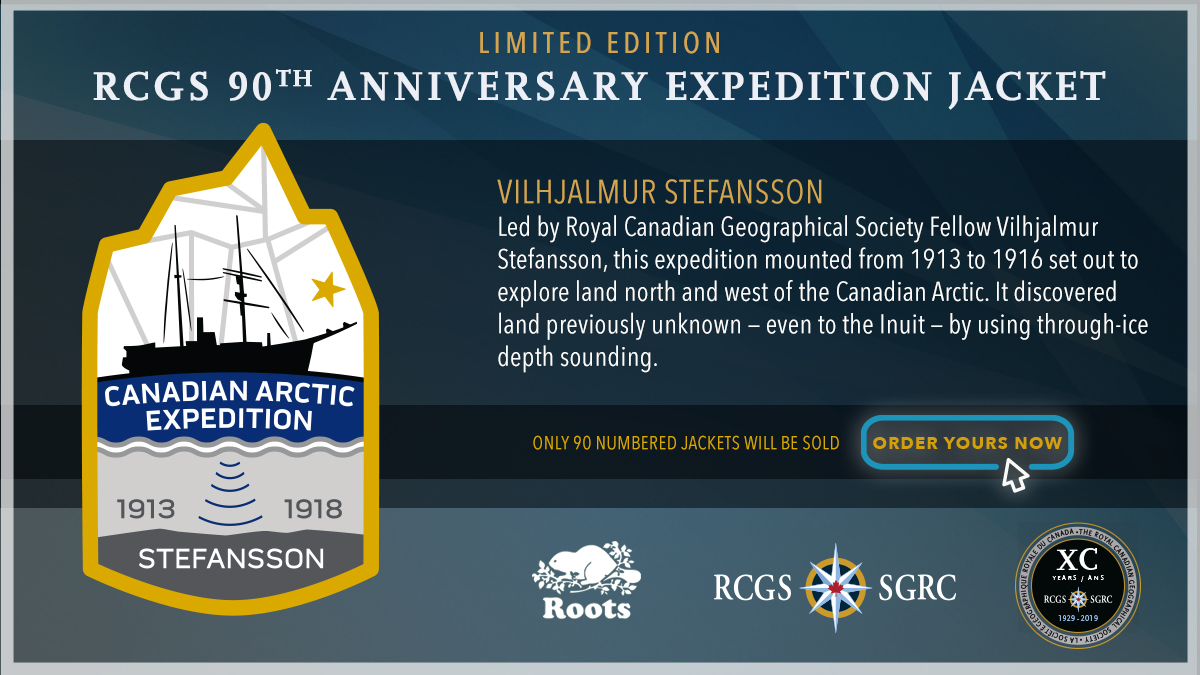 Vilhjalmur STEFANSSON
Led by Royal Canadian Geographical Society Fellow Vilhjalmur Stefansson, this expedition mounted from 1913 to 1916 set out to explore land north and west of the Canadian Arctic. It discovered land previously unknown — even to the Inuit — by using through-ice depth sounding. 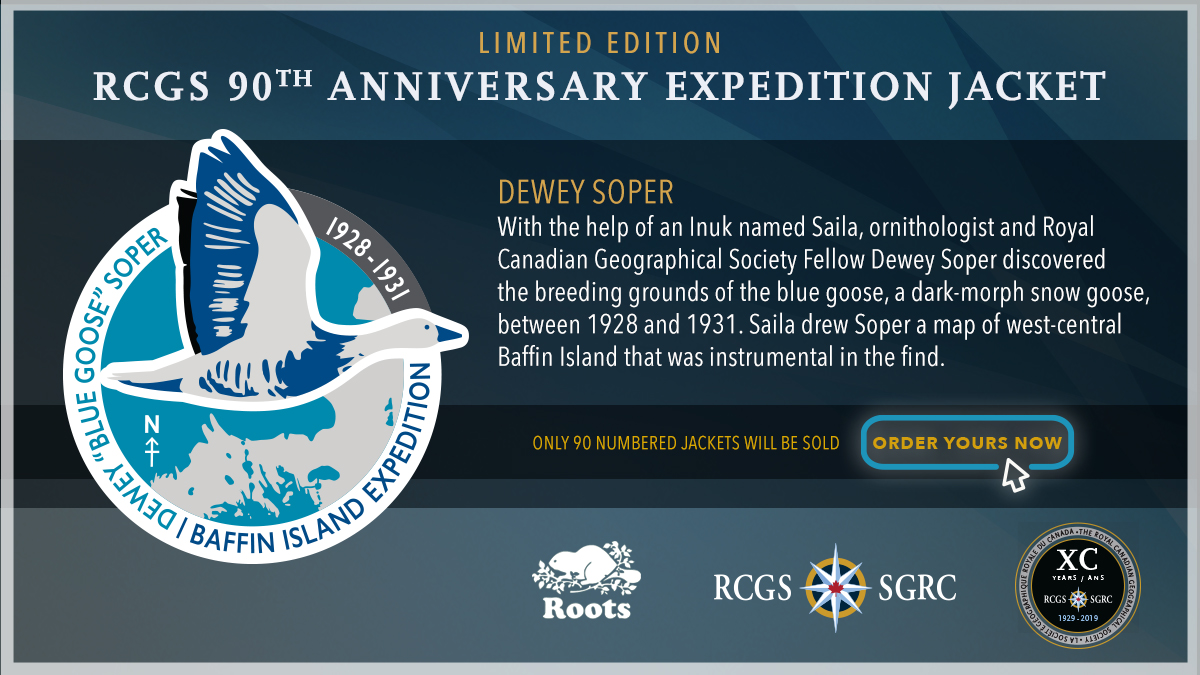 Dewey “Blue Goose” SOPER
With the help of an Inuk named Saila, ornithologist and Royal Canadian Geographical Society Fellow Dewey Soper discovered the breeding grounds of the blue goose, a dark-morph snow goose, between 1928 and 1931. Saila drew Soper a map of west-central Baffin Island that was instrumental in the find. 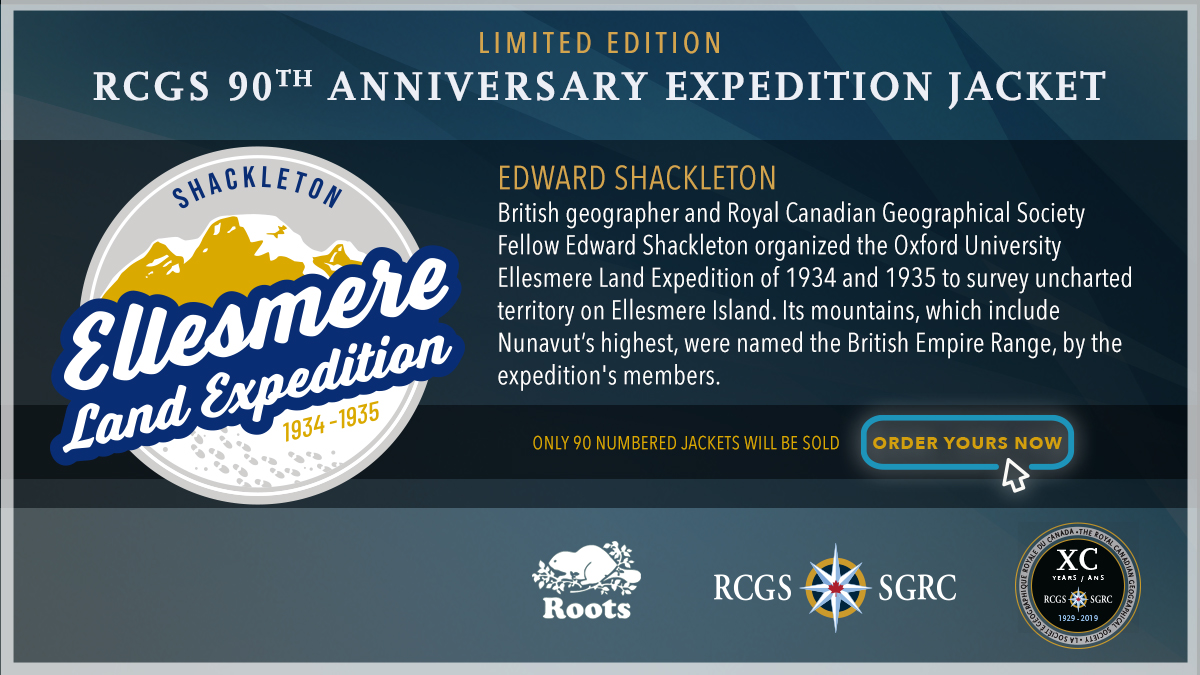 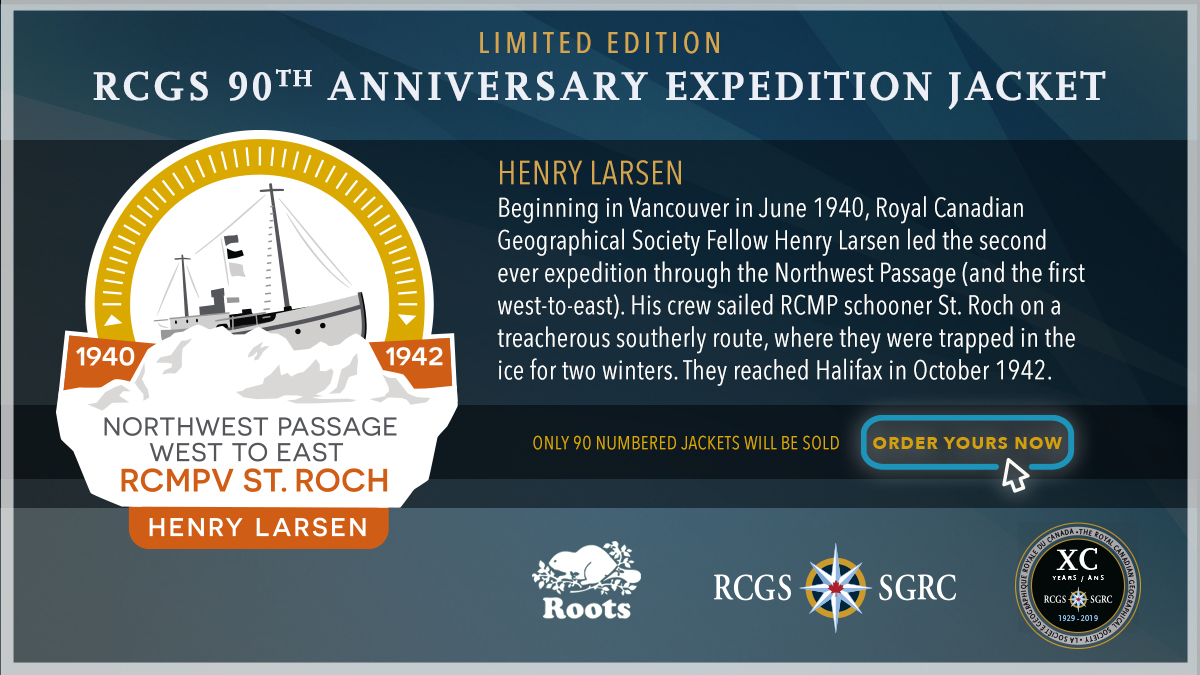 Henry LARSEN
Beginning in Vancouver in June 1940, Royal Canadian Geographical Society Fellow Henry Larsen led the second ever expedition through the Northwest Passage (and the first west-to-east). His crew sailed RCMP schooner St. Roch on a treacherous southerly route, where they were trapped in the ice for two winters. They reached Halifax in October 1942. 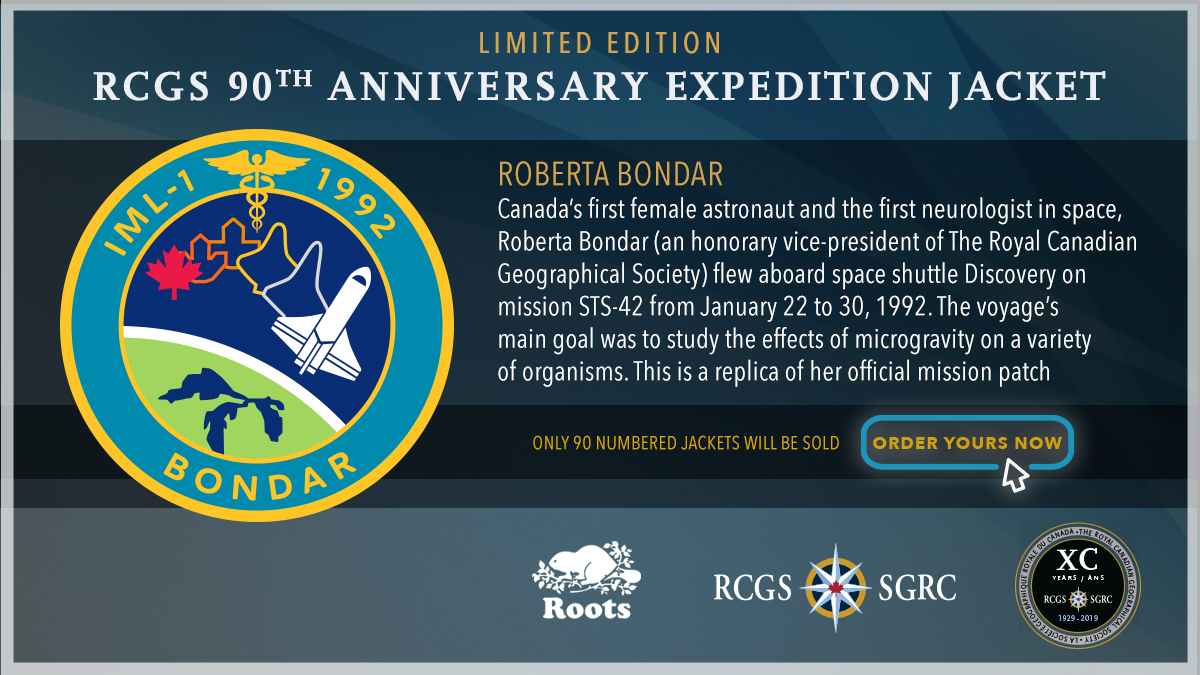 Roberta BONDAR
Canada's first female astronaut and the first neurologist in space, Roberta Bondar (an honorary vice-president of The Royal Canadian Geographical Society) flew aboard space shuttle Discovery on mission STS-42 from January 22 to 30, 1992. The voyage's main goal was to study the effects of microgravity on a variety of organisms. This is a replica of her official mission patch. 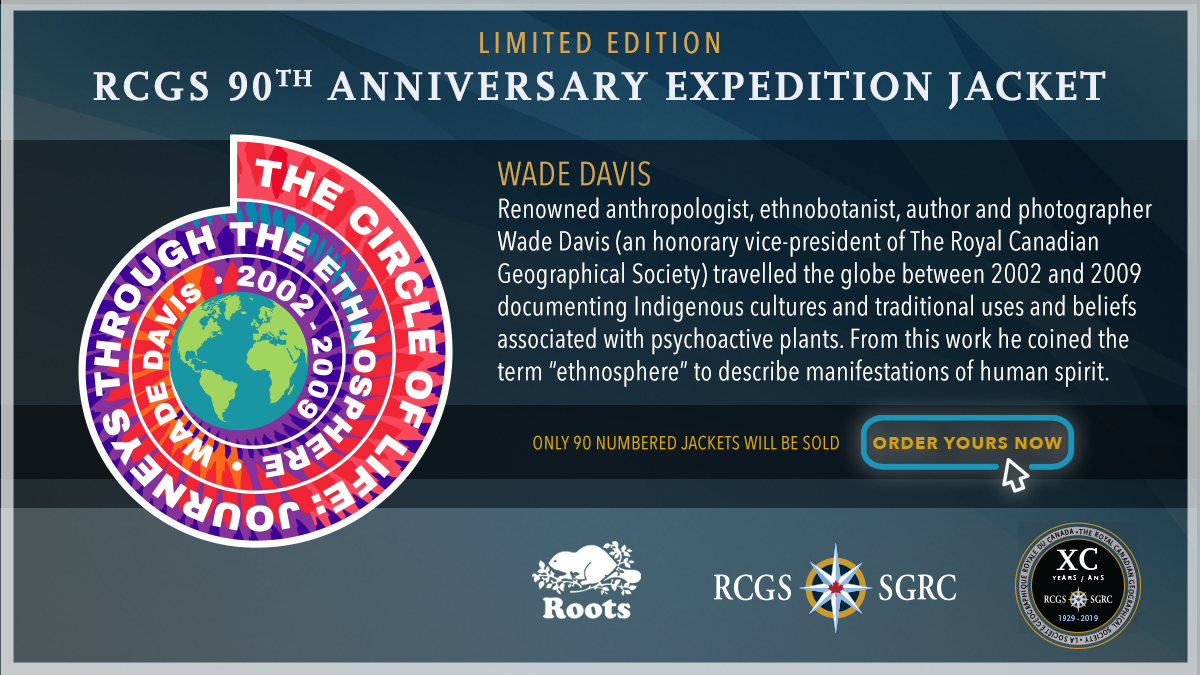 Wade DAVIS
Renowned anthropologist, ethnobotanist, author and photographer Wade Davis (an honorary vice-president of The Royal Canadian Geographical Society) travelled the globe between 2002 and 2009 documenting Indigenous cultures and traditional uses and beliefs associated with psychoactive plants. From this work he coined the term "ethnosphere" to describe manifestations of human spirit.

There are only 90 limited edition RCGS x Roots 90th Anniversary expedition jackets available at $750 each. To place your order for a custom-made expedition jacket, please visit Canadian Geographic’s online store at http://shop.canadiangeographic.ca