The “frozen rainforest” within the ice

Glaciologist Joseph Cook on the vibrant life in the Arctic ice sheet
By Tyler Cheese
August 10, 2021

The sweeping vistas of Greenland's glacial ice still take Joseph Cook’s breath away — even after more than 15 expeditions. Cook is a British glaciologist at Aarhus University in Denmark and a Rolex Enterprise Awards Laureate who has been embarking on expeditions to Greenland to conduct his research on Arctic ice for over a decade. Arctic ice is not the pristine and sterile environment we often think it to be, he says. Instead, there’s a “frozen rainforest” of microbial life on the surface of the ice. This “rainforest” ranges from an algae that darkens the colour of the ice to cyanobacteria (blue-green algae) in cryoconite holes — melted shafts in the ice that are full of dust and microbes. Unfortunately, both of these glacial ecosystems are speeding up the ice melt caused by climate change, contributing to rising sea levels. Cook spoke to Canadian Geographic about glacial ice darkening and its potential impact on the planet’s future.

On the first discovery of these ecosystems

If you rewind all the way back to the 1800s, there are reports of these ecosystems in the diaries of some of the early polar explorers. For example, Adolf Nordenskiöld did a crossing of the Greenland ice sheet in 1875, and he wrote in his diaries about the strange colour of the ice. He said it was dark grey and he thought it was space dust. And he moaned about these little holes in the ice surface because he kept tripping over them and getting his feet wet in them, and couldn't find enough clean ice to put a sleeping bag down at night. And eventually, he got so annoyed with these things and was so intrigued by the grey colouration of the ice that he got his biologist to look at some of it under the microscope. And they realized that it wasn't space dust: it was living microorganisms. So, in some ways, this was known about 150 years ago, but then we basically just forgot about it between 1875 and about 2010. 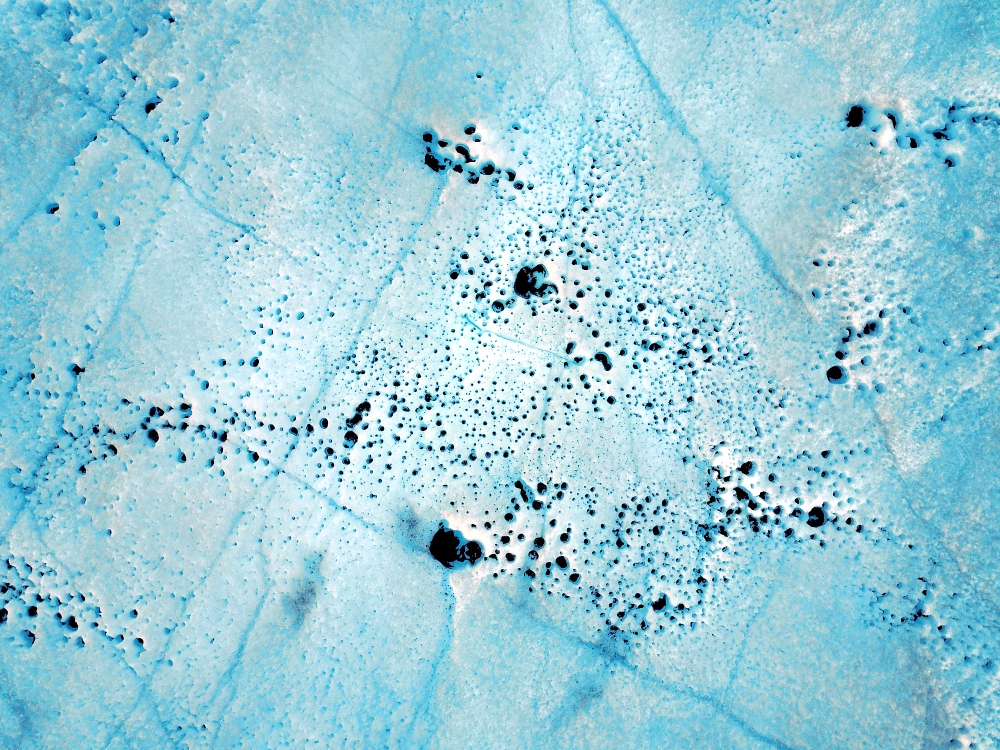 Cryoconite, holes filled with debris and microbes, form on Arctic ice and speed up the melting process due to their dark colour. (Photo: Joseph Cook)

On the “frozen rainforest”

Melting zones [regions of the Arctic that are susceptible to thawing with rising temperatures] are actually this complex patchwork of different colours and textures. And one of the reasons for that is that there's microbial life that exists on the surface of the ice. One is a thin blanket of glacier algae that changes the ice from being white and blue to being this dark brownish-grey. That colour arises from a pigment that acts like a natural sunscreen for the algae to stop them from getting fried in the sun. And the emergent effect is that the ice takes on that colour as the algae grow. That's a problem because making something darker makes it more effective at absorbing energy from the sun – just like a dark t-shirt on a sunny day. So these algae are accelerating how rapidly glaciers melt. The other ecosystem, cryoconite, is a collection of all kinds of different debris that’s washing over the surface of glaciers. They get bundled up by a particular microbe called cyanobacteria. These cyanobacteria are long and stringy shaped, and they collect material that's washing over the ice surface. So all the stuff that would otherwise be washing away off the ice surface is dense enough and heavy enough to sit on the ice. And because it's dark coloured, it melts down into the ice surface and forms holes that act as habitats. So when I talk about the “frozen rainforest” I'm talking about these two things.

On experiencing the Greenland ice sheet for the first time

I've always been quite an outdoorsy person and I've enjoyed learning by experiencing the outdoors: exploring, rock climbing, hiking and all that kind of stuff. I had worked a little bit in Svalbard before and so I thought, naively, that I was difficult to surprise. When I arrived on the ice I was just completely blown away by the scale of the thing — and I still am, to be honest. It’s so large and so powerful but at the same time so vulnerable and sensitive to our actions, and this is just a strange paradox. There's so much ice that you have the same sort of feeling as when you go out in a boat on the ocean. You can only see ice to the horizon, in every direction. And unless you're way high up above the snowline it's not the plain white environment that you might expect. It's this patchwork of colour – neon rivers cutting through it, crevices crisscrossing the surface, and patches of algae blooming. The longer you spend the more your mind keys into the small nuances of the environment and you realize that it's changing, hour to hour. The sort of landforms that take millennia to form on dry land, form in front of you on the ice, over days and weeks and months. It’s quite incredible.

On how Canada’s ice compares to Greenland’s

There hasn't been a huge amount of work done on glacier algae in Canada, but there's certainly work on cryoconite around the Canadian Arctic. It would be a surprise if the glacier algae didn't also exist there but I think that no one's really looked. The Greenland ice sheet is just so big. It's not constrained by the surrounding topography, and there are no inputs of dust and debris from mountainsides and that sort of stuff because the ice just sits over the top of all that. Whereas in places like Canada, Svalbard, and the Alps, you have a lot of inputs from the surrounding topography that complicate the situation a little bit. And as far as I know, Greenland really is the ground zero for this particular glacial algae darkening effect, because it's so wide and flat and unaffected by other contaminants.

On his latest work

I'm interested in how the colour of ice is changing as global temperatures rise. Instead of colour we refer to the albedo, which is the reflectivity across all wavelengths, which are all important for determining how much energy is absorbed by the ice, and therefore how quickly it melts. So what I've been doing recently is developing numerical models and new software tools for analyzing drone and satellite data that help us to better map, monitor and measure the changing albedo. And now I’m trying to scale that up to the global level. We can use satellite data that's freely available ready to draw inferences about how the ice is changing at the regional to global scale. 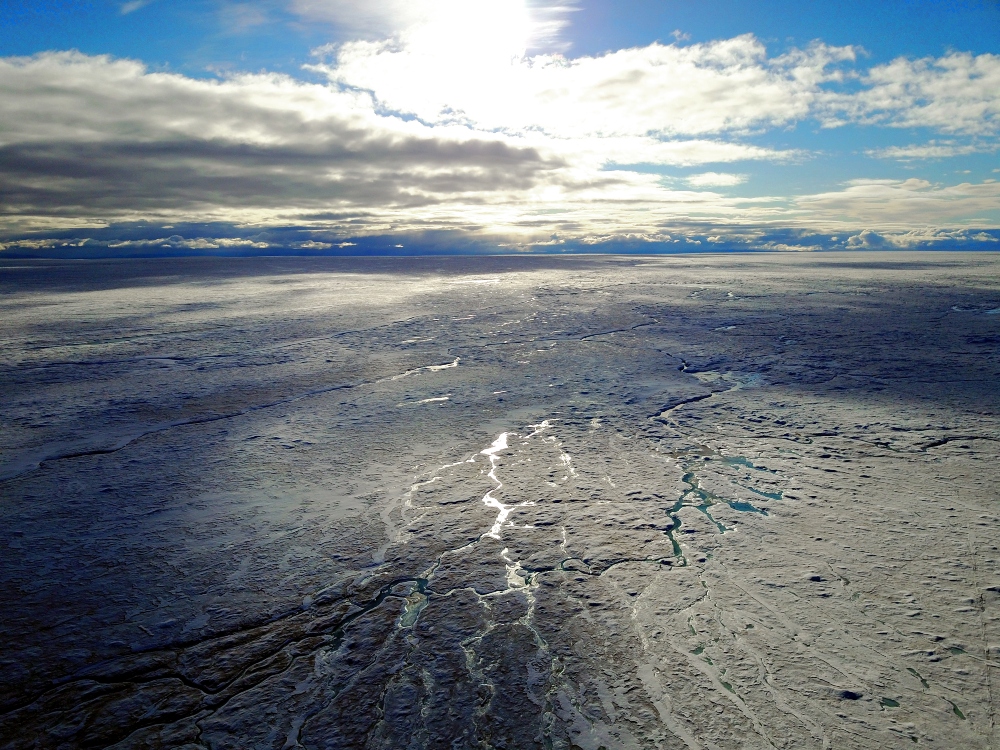 The Greenland ice sheet covers 1.71 million square kilometres and is the second-largest ice sheet in the world after Antarctica's. (Photo: Joseph Cook)

On the impact of glacial ice darkening

We're talking about sea level rise —which means certain low-lying areas around the world are likely to become inundated in the coming decades. It means those places will experience an exodus of people that have to be relocated further inland. It means that properties will become uninsurable and difficult to sell. It will have negative effects on local and global economies. It’s a really big threat to the way that we live. It's going to be a pretty big deal. And this research on glacier algae and cryoconite indicate that this could all happen sooner than expected. There's a systematic underestimation of future sea level rise because this research isn’t accounted for in models of the future. If we want to manage the situation effectively then we need to have realistic information about how rapidly we can expect this to happen. One of the main things that are going to contribute to sea level rise is all this freshwater, locked away on the land, being released into the oceans. The main controlling variable for how rapidly that occurs is the darkness of the ice. If we're not accounting for major darkening processes then we’re likely underestimating how rapidly the sea level is going to rise.

On his coolest – pun intended – experience on the ice sheet

In 2018, I collaborated with another Rolex laureate, Francesco Sauro. Our mission was to go into the ice sheet and camp in the winter, in the dark. In the winter the rivers freeze solid and there are these cave systems deep inside the ice that you can access when there's no water flowing in. So we had this mission to go and explore these deep, deep ice caves and that was phenomenal. We really didn't know what we were going to find when we got there. What we did find was these just enormous cathedrals inside the ice — these completely beautiful, enormous caves. With liquid water lakes at the bottom even though the surface is frozen solid. We mapped the caves, so we got some insight into the plumbing system of the ice sheet. And just the experience of going in there and exploring, then coming back out with the Northern Lights overhead and the stars and you’re that far away from civilization... that was a stand out for me.