Following the footprints of polar wildlife with photographer Paul Nicklen

In 1994, Paul Nicklen went on a solo Arctic expedition for three months. The acclaimed photographer, who grew up in Kimmirut, Nunavut, had just quit his job as a biologist in the Northwest Territories. On the expedition, Nicklen realized how in love he was with the polar ecosystem. He knew then that he wanted to capture it with a camera and share it with the world.

Since then, Nicklen has shot over two million images of Arctic and Antarctic wildlife, often on assignment for National Geographic, and won numerous awards. His latest book, Born To Ice, available now from teNeues, takes readers on a visual journey to both poles and allows an intimate peek into the lives of animals Nicklen worries are threatened by climate change.

On what’s special about the book

Being on assignment for National Geographic for 17 years was an incredibly powerful and beautiful journey, and a very important journey to discover what true storytelling is – being a journalist, tackling the hard issues. But at the core of who I am I’ve always been a fine arts photographer.

For a long time, I never allowed myself to put down the left-brain, storytelling part of my brain and just open up the doors to the right-side, creative part of my brain and celebrate the polar regions for all their beauty and grandeur. Now, with this book, I invite people into this world without judgement in an attempt to break down the walls of apathy. I invite them into a world that I've been obsessed with – that I've been in love with – since I was a kid. I think that's why I am so excited about this book.

On his favourite shots

I really love species that represent a habitat and represent an ecosystem. Narwhals are a very powerful representation of the Arctic for me. Photographing them was the most challenging thing I've ever done – it was eight years of going back trying to film and photograph them.

I love the polar bear in the window in Svalbard, because that image combines art, science and conservation. I also love the reflection of the polar bear diving under the ice. Again, that really tells a story.

Then you go down to Antarctica. I dove under the ice with the clearest visibility in the world with emperor penguins, looked out over 400,000 king penguins and got the chance to be in the water with a leopard seal again. I look at it this book and I just get lost in so many beautiful memories. 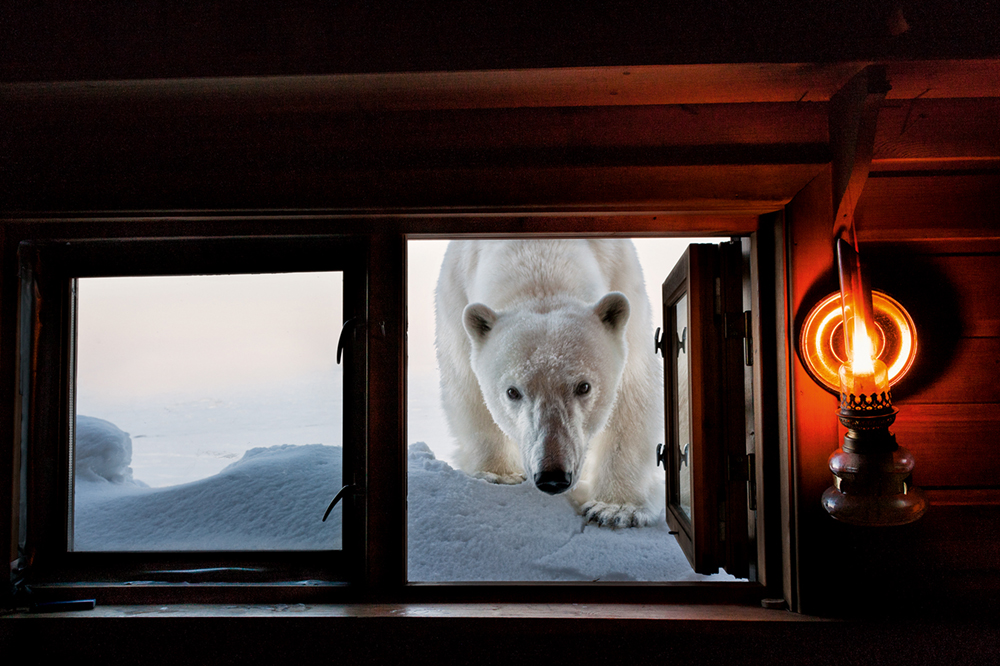 A polar bear looks through the window of Nicklen’s cabin in Svalbard, between mainland Norway and the North Pole. (© Born to Ice by Paul Nicklen, www.teneues.com, Face to Face, Svalbard, Norway, Photo © 2018 Paul Nicklen. All rights reserved. www.sealegacy.org)

On knowing how close he can be to an animal

With all the photography I do, I want to be a fly on the wall. My dream since I was a kid was to be a ghost next to these animals. I'd love to stand two feet from a polar bear, but obviously that’s not healthy for the bear or me. So I've learned through time. The most scared I've ever been was in New York City in the subway station when I was young, and I was actually terrified. Being around animals and being immersed in nature is where I'm comfortable. It's my happy place.

Whether it’s a bear, a leopard seal, a narwhal or a walrus, the secret to all these animals is always let that animal dictate the encounter. That's what people don't realize when they look at my work. They don’t realize that one polar bear picture took two months to get, waiting and waiting for that moment: the right bear, the right situation and the right light to come by and to engage with you.

If I can get five great pictures a year, then I'm doing great. People think I go out and shoot a great picture every day – and I don't. For the emperor penguin story that I did for National Geographic, I shot over 55,000 images and they only published 10. I work extremely hard. I'm always out shooting, I'm always out working trying to connect people to this world and I fail 98 per cent of the time … And that's fine. That’s the journey and you have to really love it, not just the results. 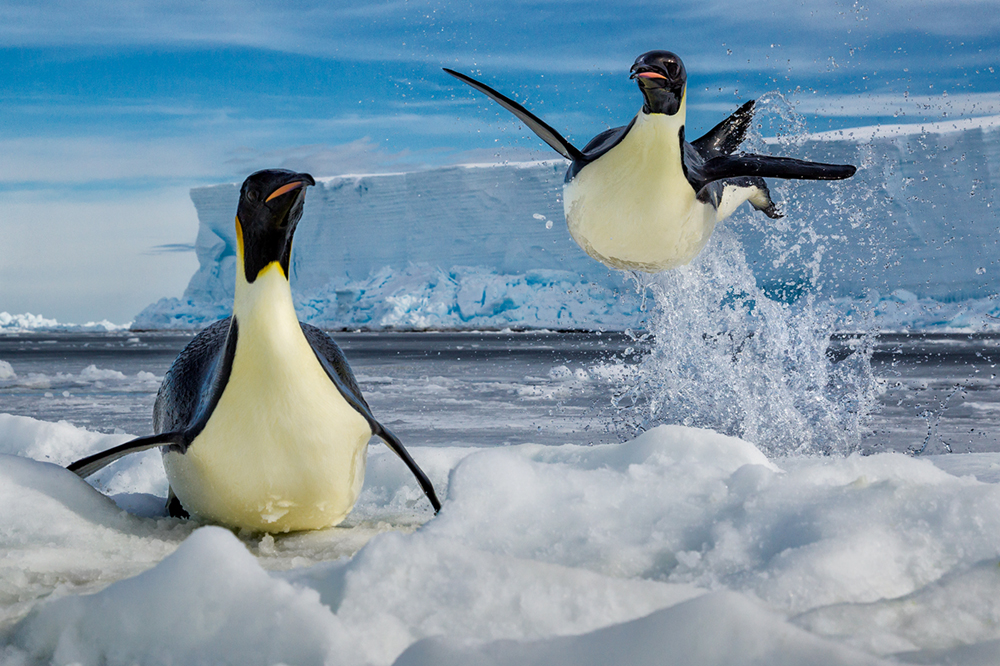 An emperor penguin is caught mid-leap in the Ross Sea, Antarctica. (© Born to Ice by Paul Nicklen, www.teneues.com, Leap of Faith, Ross Sea, Antarctica, Photo © 2018 Paul Nicklen. All rights reserved. www.sealegacy.org)
On witnessing the effects of climate change firsthand
It’s quite incredible being out with the Inuit, hearing them say things like, ‘We can no longer go there. We used to travel that way across the sea ice but now its rotten.’ I talked to Aleqatsiaq Peary, who is the great-great-grandson of Robert Peary, who was supposedly the first person to reach the North Pole. He explained that the biggest challenge for his great-great-granddad to get to the North Pole was all the rough, broken, haggard ice. He said he can’t even get to the places where Peary travelled 100 years ago. For example, the ice bridge that joined Baffin Island to Greenland that the Inuit used to travel back and forth; they haven’t been able to go across that ice bridge for 20 years.
On childhood experiences with photography

When I was a kid, I grew up in this community of a very distant world where there is obviously no place to get film processed. [My mom and I] would be out on the land with the Inuit learning from them and coming back with these beautiful moments out in nature, hunters on the ice or travelling on the sea ice.

Then my mother would develop these images in the dark room. Watching those moments come to life as an eight-year-old kid was just a magical process – to watch the light, the colour, the image appearing in the emulsion. I fell in love with the process but never thought that something like this would ever become available to me.

It all hit me in the face when I left the North to go to university in Victoria at 18. I found out I could learn to dive and learn to do underwater photography, and that was my entry point into that world. 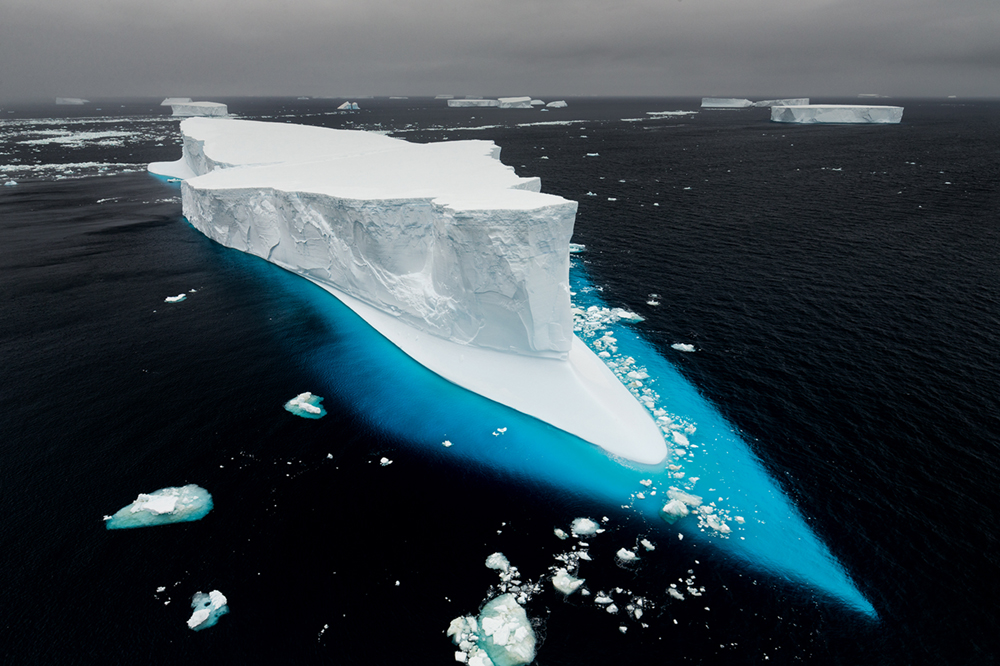 On what he hopes people take away from the book

The scary part, the negative part, is that this book could very easily become a record of things that we stand to lose. Narwhals are as vulnerable as polar bears, and as we lose sea ice – which is like soil in a garden – we are losing these animals’ habitats. The same thing goes for Antarctica. The ecosystems have been changing so rapidly

It’s really a message of art, science and conservation. This book leads with the art. It has to be powerful, beautiful, emotional, and from there, if people are open to it, they will ask themselves some questions about science, learn a little bit and then understand that we are all connected – and that's the conservation part of this book.

On the book’s cover

I realized I spent my life walking in the path of these great animals, these charismatic megafaunas across the sea ice, whether it’s following belly tracks of penguins, polar bear footprints, caribou or wolves. I just really thought the bear leading off into the distance had a very beautiful, soft, gentle feeling of inviting people in to come with me and walk with me.