The slowdown of human activity as a result of the COVID-19 pandemic has led to some surprising benefits for wildlife conservation. Can we keep them going after the danger has passed?
By Julia Duchesne
May 19, 2020

From elk poop piling up on the streets of Banff to wild turkeys strutting through Montreal, Canadians are seeing more wild animals than usual during the COVID-19 pandemic. Canadian Geographic asked five experts how the slowdown of human activity is affecting wildlife across the country, and what lessons we can learn for the future.

Boris Worm’s lab at Dalhousie University researches the relationship between humans and marine biodiversity. During the pandemic, Worm is studying the North Atlantic right whale, one of the world’s most endangered marine mammals, with only 400 individuals left. The whales feed exclusively on tiny marine zooplankton called copepods. Unfortunately, their usual summer feeding grounds in the Bay of Fundy and the Gulf of Maine are heating up fast due to climate change. In recent years, the area’s copepod abundance has fallen by more than a factor of 10, and the whales have headed north in search of food.

Their search brought them to the busy Gulf of St. Lawrence, where they have faced new threats to their survival, including collisions with ships and entanglement in fishing gear.  “More than 90 per cent of fatalities are not caused by natural causes in that population,” says Worm, “so it’s very serious.”

The economic shutdown to slow the spread of COVID-19 has reduced fishing and shipping activity in the Gulf of St. Lawrence and other busy shipping lanes. Worm says researchers in B.C. have found the ocean there to be at least 15 per cent quieter, and he expects the Atlantic is quieter too. “It's an unprecedented opportunity to see how the whales might be less stressed, and maybe behaving more naturally in that environment.”

The whales are closely monitored — Worm says that every remaining whale is identifiable by its markings and has a name. Although researchers can’t get out on the water right now due to physical distancing guidelines, they’re exploring other ways of keeping tabs on the whales: a student in Worm’s lab is working on a way to track them using high-resolution satellite imagery. “We're trying to leverage technology to basically take people out of the picture as much as possible so we can continue to have a lookout for the whales, no matter what the circumstances are,” says Worm.

With human activity reduced by Covid-19, animals are venturing into places they don’t normally go. Justina Ray is an ecologist who studies wolverine and caribou. A former co-chair of the terrestrial mammals subcommittee of COSEWIC, she is involved in research and policy activities associated with biodiversity conservation in northern landscapes.

Ray says it’s wonderful to see how quickly animals have responded to the temporary slowdown. But that new breathing room might not last. “If we go back to full throttle again, this [slowdown] will have no bearing on anything,” she says. So far, she adds, “There's really nothing that we can see at this point that would change the equation for the largest threat to species, which is cumulative habitat loss and degradation.” 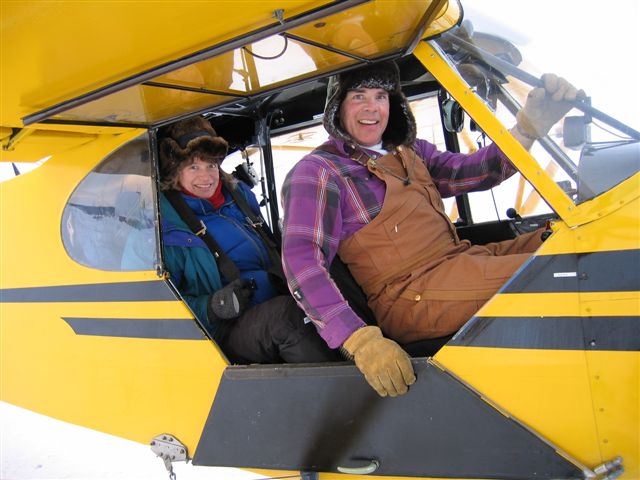 Justina Ray and a pilot head out on a caribou and wolverine survey in a bush plane. (Photo: WCS Canada)

For Ray, the pandemic has also highlighted the link between ecological degradation and human health. As humans expand into wild areas, we create more opportunities for pathogens to spill over from wildlife to humans, she says. “This was foreseen, it's happened before, and now it's just particularly bad.”

While the chances of a pandemic-level spillover in Canada are very low, we too have problems at the wildlife-human interface. A number of diseases in Canada, like Lyme disease, emerged first in animals. “They are a consequence of how we treat habitat, they're a consequence of climate change,” says Ray. Biodiversity loss is a slow-moving crisis, and the average Canadian might not worry about it, “but this pandemic has shown how important it, in fact, is.”

Dan Kraus has worked at the Nature Conservancy of Canada for over 17 years. He is interested in how people have been turning to nature for relaxation during this stressful time.

“Being close to nature is good for our mental and our physical health,” he says. “Nature is not a ‘nice to have’ in our cities. It really is a critical part of the infrastructure.”

While conservation and restoration projects, including tree-planting and invasive plant removal, may be set back by the pandemic, the slowdown of human activity may have other, positive effects. This is a deadly time of year for turtles, which are often hit by cars on their way from wetlands and lakes to lay eggs on higher, drier ground. With fewer cars on the road, Kraus says there might be less turtle mortality this year. And with the closure of some parks and trails, birds that nest at ground level might be disturbed a little less by humans and dogs.

Kraus hopes the pandemic will help shift people’s perception of nature. “Hopefully, as we come out of this, we'll remember that nature was there and has been there for us in times of need. But now we're in a world where increasingly nature needs us.”

Dennis Keeper is an Anishinaabe land guardian at Pimachiowin Aki, a 29,000-square-kilometre stretch of boreal forest, rivers, and lakes on the Manitoba-Ontario border. Looked after by the Anishinaabeg for thousands of years, it’s one of a handful of UNESCO World Heritage Sites recognized for both their natural and cultural heritage. Keeper spends a lot of time out on his traditional hunting grounds and trapline, keeping an eye on the land and the animals. The area is home to woodland caribou, a threatened species. At the end of March, Keeper spotted a group of eight of them in the woods. “I haven't seen any caribou around here for, I think, about 11 or 12 years,” he says. “They used to go by here by the hundreds.”

A monitoring trip with youth in Pimachiowin Aki in September 2019. (Photo: Dennis Keeper)

As part of his guardian work, Keeper talks to people in his community about what they observe while hunting and trapping. The area is usually busy in the summer and fall thanks to local lodges and popular canoeing routes on the Berens and Bloodvein rivers. If that changes, he expects to see more animals, but he says it’s too early to tell how COVID-19 will have impacted the boreal forest. He’s waiting to hear from harvesters in the fall.

The pandemic is also affecting Keeper’s work with Elders. Normally, he would stop by their houses to talk about traditions and stories, but he has stopped for their own safety. “This [virus], it's so brutal on the elderly. So I can't go do that,” he says. The shutdown has affected younger community members too: hunting has been curtailed by social distancing rules, and fewer people are getting out. “It’s really separating people here.” 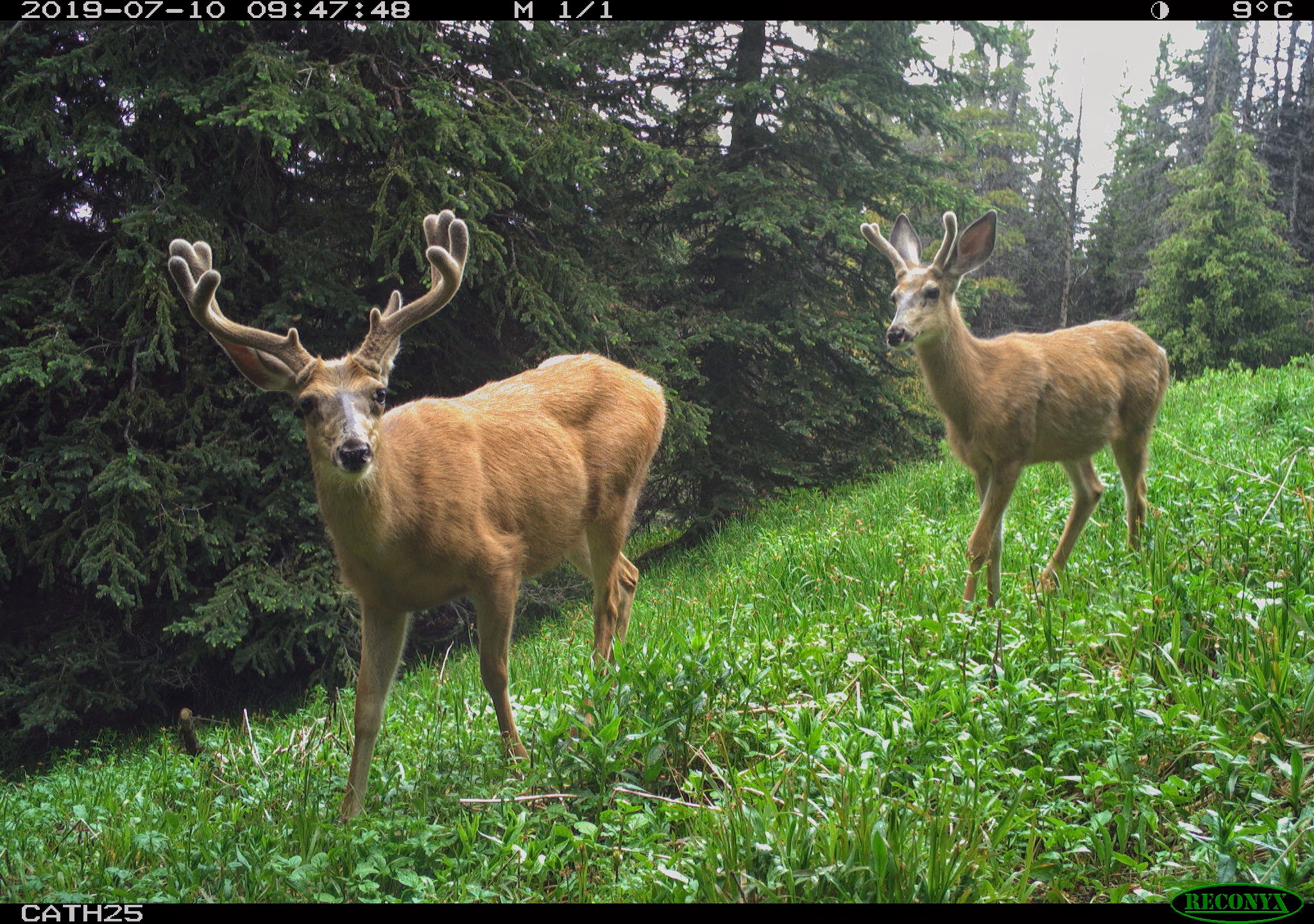 “We find it so difficult to control for the natural variation in nature when we're trying to understand these animal responses,” says Burton. They had been hoping BC Parks could shut down some trails for research purposes, but the pandemic shutdown offered a better chance to understand the impact of human recreational park use on animal behaviour.

Camera traps may be an effective long-term monitoring tool for parks, many of which don’t have the budget to conduct more extensive surveys, says Burton. The lab hasn’t yet collected and analyzed their results, but they have collected some images of wildlife using trails that would normally be filled with people. Burton hopes to learn whether certain species are more vulnerable to detrimental impacts of recreation, or which types and levels of recreational activities have negative consequences.

“Our goal is to turn this into information... for managing the parks,” he says.