As the mountain pine beetle marches relentlessly eastward from British Columbia, it has left a massive trail of dead trees in its wake.

Now, Alberta is hoping to make headway in its fight against the beetle with the federal government’s October announcement of $68.4 million over three years to help control, research and mitigate the impacts of the damaging pest.

The funding includes $24 million for 2020-2021 to address the outbreak in the Rocky Mountain National Parks and mitigate the effects on the forestry sector.

Natural Resources Minister Seamus O’Regan says aerial surveys last fall estimated that upwards of 147,000 pine trees over eight million hectares were killed this past year — and the federal government’s plans to help its provincial counterparts battle the beetle. Alberta has estimated that $11-billion worth of pine in Alberta’s forests are under direct threat.

The beetle was first spotted in western Alberta in the early 2000s, but has spread more rapidly over the past decade, leading Alberta to invest a half billion dollars over that timeframe as scientists struggle to find ways to halt its spread.

To the east, the government of Saskatchewan is investing in detection, hoping to detect evidence of the beetle immediately if it crosses Saskatchewan’s western border. Finding the beetles is done through aerial surveys, with researchers pinpointing infested areas by spotting the telltale red crowns of the dead trees.

“Saskatchewan is the gateway to the east,” O’Regan notes. “The beetle is within 50 kilometres of the border and there aren’t any more natural barriers to its expansion.”

Many trees in British Columbia, which has a longer history with the beetle, have an “institutional memory” and can fight off infestations. The trees to the east are “naïve trees” with no defenses, says O’Regan.

Huge swathes of dead trees not only spell disaster for the forestry sector, but increase the possibility for devastating wildfires. 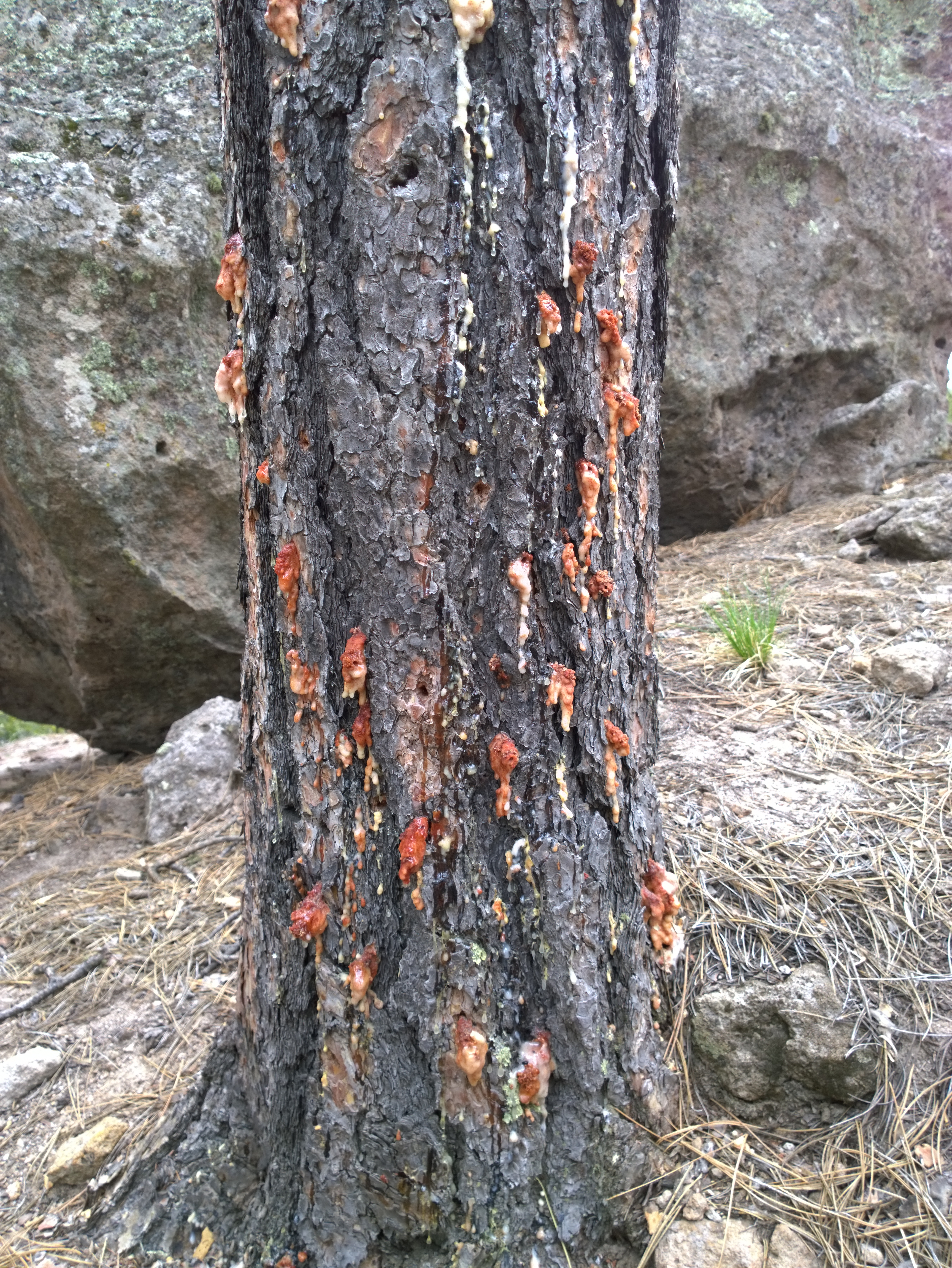 Pitch tubes, which can be seen on the tree's bark, are a defense mechanism of the tree to try to expel the beetle. The production of resin can sometimes successfully "pitch out" the beetles. (Photo: Natural Resources Canada)

While residents may not have enjoyed Alberta’s unusually cold winter last year, the sustained temperatures of below -30 Celsius are thought to have killed off about 90 per cent of the beetles in the Jasper and Hinton areas. That presents a unique opportunity for the federal and provincial governments to combine their resources to strike hard in 2020 and over the next couple of years.

“The destruction by this beetle disrupts forest management operations, increases wildfire risks, impacts watersheds and jeopardizes sensitive habitats and wildlife — that’s why it’s so important for federal and provincial governments to coordinate things on the ground,” says O’Regan.

The most important and difficult step is detecting newly infested trees. Scientists will use aerial surveys and studies on the ground to detect where the beetles have spread and the potential pathways they might take to spread eastward to Saskatchewan. Much of the focus will be on the eastern edge of the beetles’ spread.

Canadians are experts at aerial surveillance — the minister notes we've been conducting aerial surveys since the early 1920s, having recognized the importance of trees — for forestry and recreation, as well as an indicator of the health of the environment — for one hundred years.

“This is an infestation started at B.C. and Alberta and is now moving toward Saskatchewan. It could become a real threat, perhaps, to Ontario. So the federal government has a very real role to play here, working closely with provincial governments which are very close to the ground,” the minister says.