Josée Kurtz has spent more than 30 years with the Canadian Forces and holds the rank of commodore — but insists that you just call her Josée. She grew up in Joliette, Que., a small Francophone town northeast of Montreal. In June 2019, she became the first woman to command a standing NATO naval group, involving ships and teams from Canada, Great Britain, Turkey and Romania.

On being inspired to join the military

My family is very much not people who travel a great deal. Where I got my fibre for adventure, I’m still trying to figure it out. I always say it’s a bit of a planned fluke. I’d always been attracted to professions in uniform. At some point I wanted to be a bus driver, then a police officer. The next door neighbour’s son joined the military one summer when I was about 10 and he woulld come back and have stories about basic training and about his cool adventure in the military. That’s when I decided I would join the military as well.

I had been a Sea Cadet but I didn’t have any idea of what I wanted to do in the military, just that I wanted to join the military. It happened to be the year that the Canadian Forces were opening their doors to women in the sea-going forces. I said yes and here we are almost 32 years later.

On humanitarian missions and the need to ‘pivot’ last minute

When I was second in command from 2007 to 2009, the ship in 2008 deployed to a six month NATO mission. As soon as we reached the Mediterranean, Canada got a call from the United Nations to help with the escort for food aid off the Horn of Africa. So we were redirected from our NATO mission to the World Food Programme mission.

The second mission was in 2010 when I was commanding officer of HMCS Halifax. We were on our way to do a counter-drug interdiction mission and then the earthquake hit Haiti. We were redirected to humanitarian assistance in the wake of that devastating earthquake.

We train and prepare and we deploy to do something and then as you’re executing you can be called to change. Our training gives us that flexibility and agility to change quickly, to adapt our mission and plans and carry on. I think we’re quite good at that in the Canadian military in general. Both missions were very important missions but it strikes home to the sailors when you’re going to help people in need. In the face of devastation, the sailors really turn very quickly and the mood onboard both times was exhilarating, energizing. I can’t speak more highly of the teams on both missions.

On a recent mission with NATO

Last year on short notice the Canadian Navy was asked to take command of one of the standing NATO maritime groups. From June until December I was appointed as the commander of NATO Standing Group 2, which patrols the Mediterranean and Black Sea regions. We provided presence and contributions to NATO efforts and exercises. From a Canadian perspective it was a very significant mission because we hadn’t done that kind of command mission for a number of years.

Canada’s contribution, from a sailor and ship perspective, was a resounding success in many ways. Personally I’m very proud of that. It was extremely energizing. 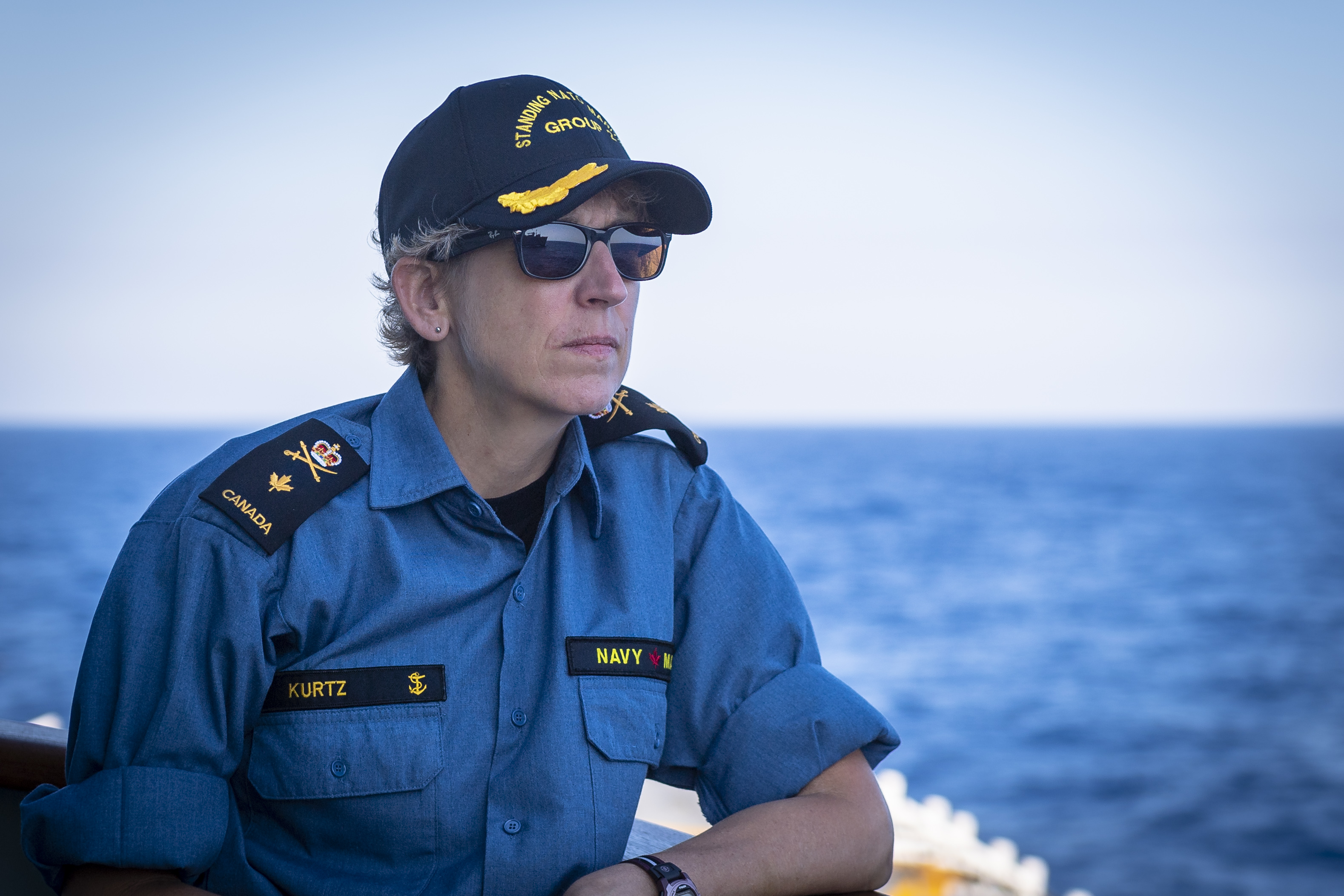 Commodore Josée Kurtz has taken part in a number of humanitarian missions. (Submitted by Josée Kurtz)

On being the first woman to do a lot of things

I don’t dwell on that and it’s not what drives me. For a great number of years I was trying to suppress that. I just wanted to do my job, to succeed equally alongside all my peers. Having joined when the Navy was opening its doors to women, I’ve been among the first to do many things.

Over the years I’ve grown to understand how important it is for the next generation to see role models. It’s not the driver for how I do things, but I cater to it a bit more for young Canadians. Women, yes, but all young Canadians.

On encouraging the next generation

I was looking for adventure, for excitement, for something that would provide a team setting. If those are the kinds of things you’re looking for, just go for it. Don’t hesitate. You will find satisfaction, you’ll find what drives you. The family and the teamwork, that’s been a very positive driver. I encourage young Canadians to certainly enroll and do it.

On overcoming challenges and having a family

I think that for me it’s the good things that are also challenges at the same time. Life in the military comes with a positive aspect of travelling, so you get to see the world and make it a little bit smaller. Travelling can also be detrimental in the sense that you’re away from home. The demand of being away, of deploying, will add a level of challenge [to having a family].

I’m very fortunate, the reason I can do what I do is because I have tremendous support from my spouse at home. My husband understands the demands of my career, having been in the military. I also have a kid who is very adventurous and very self-sufficient. When I go away, as much as I miss my family, I don’t have any worries for my homefront.