This map, “taken on the spot in the year 1768,” tells but a tiny piece of the story of Newfoundland’s bygone Beothuk
By Abi Hayward
June 23, 2021

When this map was made in 1768, the British already knew the Beothuk Indigenous People of present-day Newfoundland were under threat. Lieutenant John Cartwright was sent by Governor Hugh Palliser to Newfoundland’s interior to establish a friendly relationship with a people who were disappearing — being killed or dying through disease. While Cartwright didn’t encounter any people as he travelled along the Exploits River — the Beothuk, who moved with the seasons, were likely hunting at the coast — he made several maps of the area. These maps are now seen as one of the earliest extensive European documents of how Beothuk lived (see “Amet” for more on the Beothuk story).

Cartwright’s hand captured geological information in black ink about the water he travelled along, the hills he saw rising up, the rocks in the river. But in faded red ink, he also recorded evidence of the people who lived along the river’s banks.

The little red circles (labelled as ‘A’ in the key on the main map) show the mamateeks that Cartwright saw — the conical summer dwellings in which Beothuk lived. (Mamateek is Beothuk for house). Cartwright mistakenly identified these as the primary winter settlements of Beothuk.

A sketch of a mamateek is shown at the bottom left of the map. These dwellings consisted of several poles, attached at the top, and covered in sheets of birch bark that had been sewn together. There was space at the top for smoke to escape. The mamateeks number some 100 on the map, although Cartwright didn’t claim this was a complete count. He also noted that some of the mamateeks had been abandoned, while others had been used in the previous season. 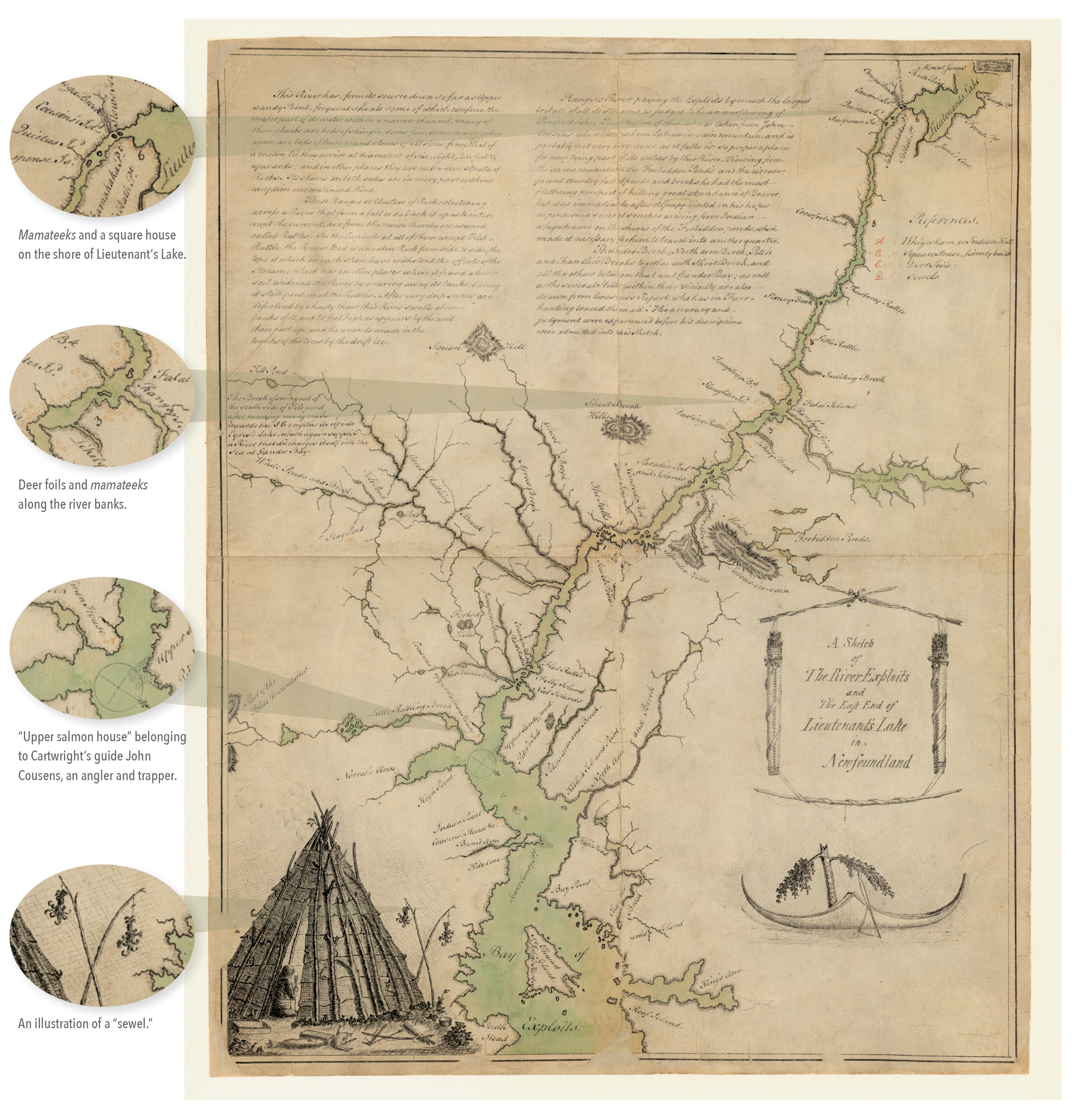 A sketch of the River Exploits and the east end of Lieutenant's Lake in Newfoundland, John Cartwright, 1768, manuscript map, Library and Archives Canada, E011161242

The map also shows two squares (B), which Cartwright annotated “square house, firmly built.” The walls of these larger dwellings were insulated with caribou skin to protect against the elements. One of these sits on the shores of what is labelled Lieutenant’s Lake (known today as Red Indian Lake) and the other is a little upstream at “Little Rattle.”

One of the most interesting features on the map is a series of wavy lines interspersed with dots (C), which indicates “deer foils.” These extended fences were designed to obstruct the fall migration routes of the caribou Beothuk hunted for food and skins during the annual caribou drive. To construct them, they would cut down a tree such that it fell in a diagonal line to the next tree along, and was still attached at the stump. This next tree would be similarly felled and so too the one after that until there was a natural zig-zag fence, filled in with branches, that the caribou herd couldn’t cross.

If there were no trees, the Beothuk were “at no loss,” wrote Cartwright. “For their knowledge of the use of sewels supplies the deficiency.” Sewels (D) were like scarecrows, “made by tying a tassel of birch rind, formed like the wing of a paper kite, to the small end of a slight stick.” The birch rind was hung in such a way “to play with every breath of wind. Thus it is sure to catch the eye of the deer, and make them shun the place where it stands.”

These maps, recorded by a white man’s hand, are an imperfect record of how Beothuk lived. But they are part of the fragmented story of a people that are no longer here to tell it.