Exploring the eskers in the "Land of little sticks"

The geological formations that surround Gangler's North Seal River Lodge in northwestern Manitoba are intriguing pathways to the past
By Aaron Kylie
September 26, 2017

There’s no shortage of signs of foot traffic here on the “Central Esker," as it's known to locals in this part of northwestern Manitoba, about 100 kilometres south of the Nunavut border. Still, Brian Kotak, the resident biologist at nearby Gangler’s North Seal River Lodge, believes he and I are likely the first humans to walk this esker in years — possibly hundreds, possibly thousands.

Our hike along this two-kilometre-long sandy ridge, formed by retreating glaciers 8,000 years ago and surrounded by lakes, ponds, and forests of small birch trees and stunted jack pines (hence the moniker "Land of little sticks"), is made easy by the well-worn game trail right down the middle. And is it ever popular with game: as we make our way from north to south along the esker, which traverses a point stretching out into Egenolf Lake, we see numerous moose, caribou, wolf and bear tracks, plus scat and shed antlers.

Egenolf and 45 of the more than 100 other lakes in the region — and the hefty specimens of Arctic grayling, lake trout, northern pike and walleye that call them home — have been the area’s main attraction for 30-plus years. Anglers from around the world flock to Gangler’s — named for co-founders Wayne and his son Ken Gangler — for the chance to fish some 2 million hectares of pristine northern wilderness. 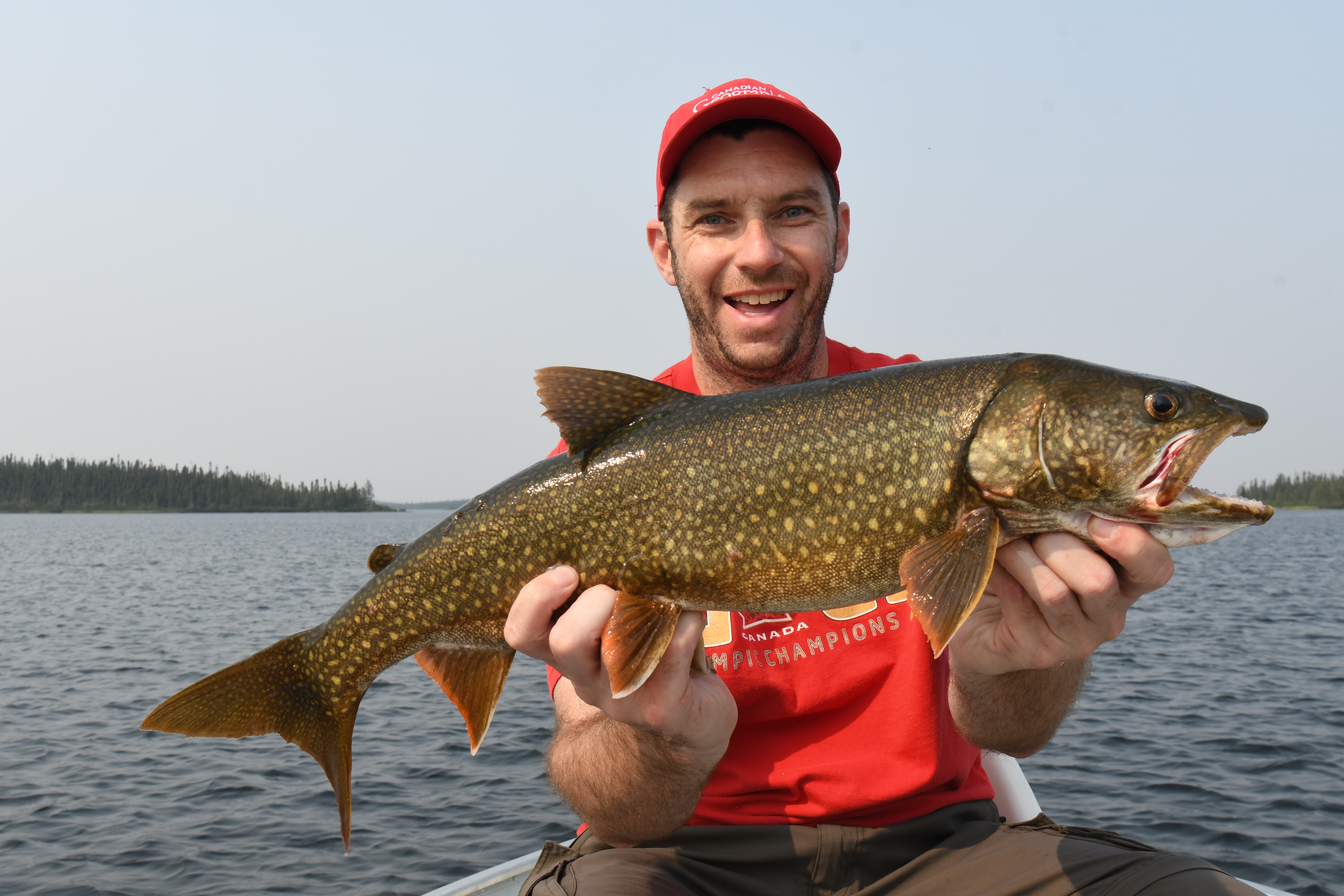 A 27-inch lake trout caught on Blackfish Lake is emblematic of what draws guests from around the world to Gangler's North Seal River Lodge in northwestern Manitoba. (Photo: Aaron Kylie/Canadian Geographic)

These days, Ken is expanding the lodge’s offerings beyond its fishing (and hunting) roots to include eco-adventures, with a key geographical feature at the fore: the region’s 13 eskers, which include the 300-kilometre-long Robertson Esker, one of the longest on the planet. “To us, it’s a jewel of Manitoba,” explains Ken. “There's really nothing else like it.”

I jumped at the chance to visit Gangler’s to see these globally important and geologically rare formations firsthand (and to test-drive the related opportunities for wildlife and northern lights viewing, mountain biking, kayaking, and fishing, of course).

As Kotak and I walk the Central Esker, the biologist describes how these deposits of sand or gravel (or both) were left behind from meltwater channels inside the glaciers when they retreated. In this area, the ice was once four kilometres thick. The result is one of the largest concentrations of eskers in the world, some of which rise more than 70 metres above the surrounding lakes. These became key travel corridors for Indigenous peoples and migratory wildlife.

About halfway along the Central Esker, Kotak and I crest a low hill; ahead, a distinct trail leads down to a set of evenly spaced rocks that line one side of the esker along a steep embankment. To our admittedly untrained eyes, the scene suggests an ancient hunting camp, but this particular esker has not been studied by archaeologists, so we have no way of knowing for sure. Portions of other eskers in the area have been studied, however, and it's believed that 'pinch points,' or steep drops along the ridges, were used as ambush sites. One such study conducted about 40 years ago identified 242 archeological sites in the region and found projectiles, scrapers and biface tools, along with evidence of use dating back to the 1490s. Another study on the Robertson Esker in the mid-1990s unearthed tent rings, hearths, a stone axe and other tools at 17 more sites, believed to be about 2,000 years old.

A short distance later, Kotak and I come across a sun-bleached rack of antlers sitting in the middle of the esker. In all likelihood it was shed in the not-too-distant past by a migrating caribou, but like the line of rocks, it sets our imaginations running wild. That's perhaps to be expected when wandering ancient geological pathways through remote Canadian wilderness; you never know when you might encounter a surprising present-day connection to the distant past. 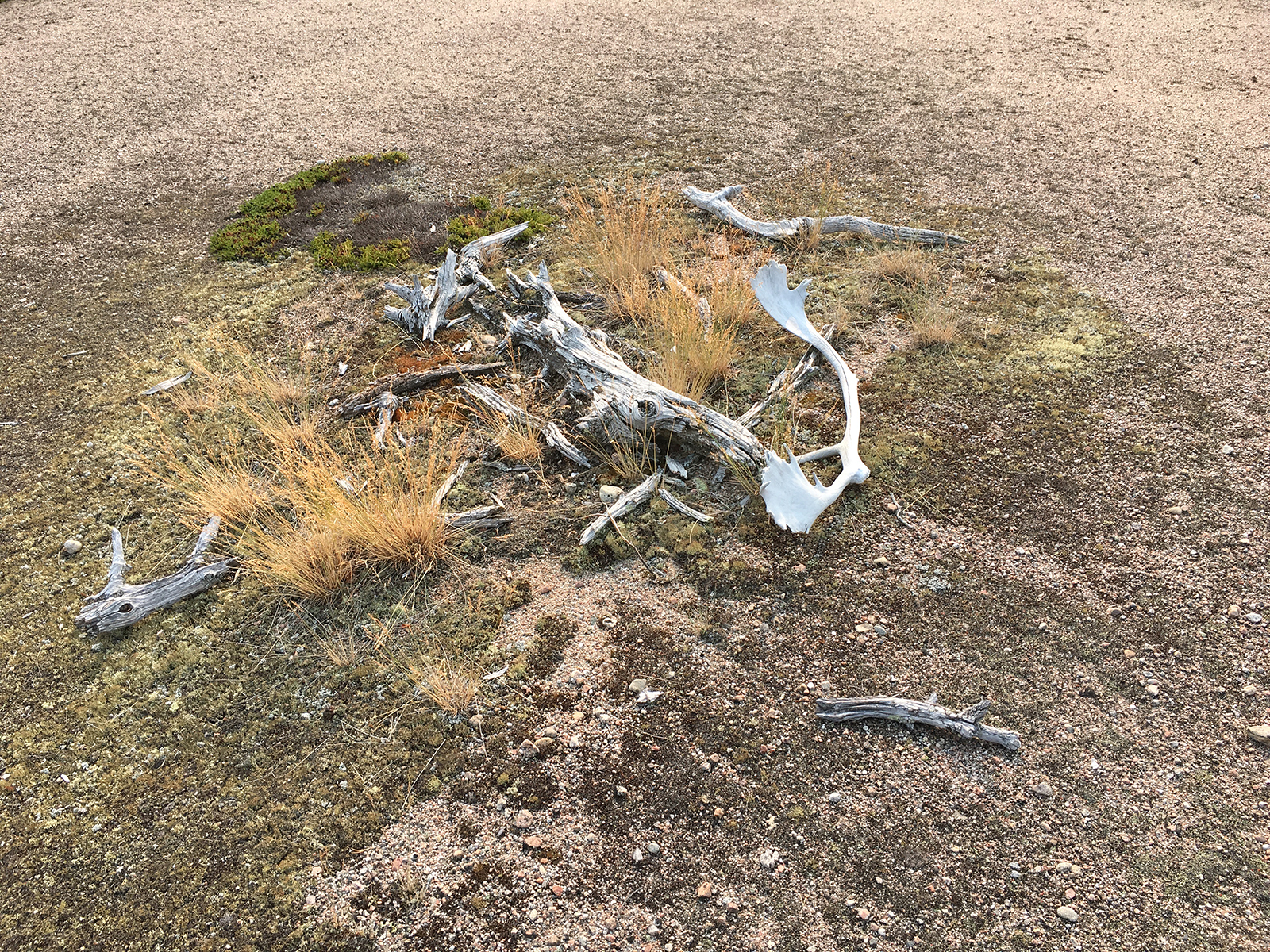