Shoalts is fundraising to support his goal of traversing 4,000 kilometres of the Arctic Circle
By Sabrina Doyle
February 13, 2017

Some people plan to celebrate Canada's 150th birthday with fireworks. Others will opt for community barbeques. Adam Shoalts, explorer and Fellow of The Royal Canadian Geographical Society, has chosen to fête the sesquicentennial by spending five months alone in Canada’s mainland Arctic.

Starting in May on the international border between Canada and Alaska, Shoalts will embark on a solo journey eastward along the Arctic Circle, arriving at Hudson Bay in September. In the 4,000 kilometres between point A and point B, he'll encounter mountains, rivers, tundra, and subarctic forest, not to mention wildlife. He will move on foot, by pack raft, and canoe.

To accomplish his goal – christened the Alone Across the Arctic expedition – he must fundraise $12,000, 90 percent of which will go toward airfare to and from his remote start and end points. Canadian Geographic talked to Shoalts about the expedition and what it means to him.

What gave you the idea to do this expedition?

I looked at what was done in 1967 to celebrate Canada’s centennial and saw that there were teams of people who canoed across Canada from Vancouver to Halifax. And I thought that sounded like an awesome trip; except Canada has changed quite a bit in 50 years and now you could probably do it and stop at a Tim Hortons every other day. So I’ve tried to up the stakes by shifting the route 2,000 kilometres northward, where there are no Tim Hortons. (Not that I don’t like Tim Hortons!)

How are you preparing for the expedition?

I’m preparing in what I guess you could say is quintessentially Canadian fashion—by lacing up my skates and getting out on the local rink 3-4 times a week; strapping on my snowshoes and going for daily treks through the woods and regular camp-outs, in addition to a standard calisthenics and lifting routine. Mentally, I’m reading up on past explorers in Canada’s North and studying maps.

What are you most looking forward to?

Well I know what I’m not looking forward to: the period before ice break-up. That will make crossing the rivers difficult. But the weather is beyond my control so I just have to find a way. As to what I’m most looking forward to, that’s simple: just being immersed in nature. I love it. To be more a little more specific, two of my most cherished memories happened in the Arctic. One was crossing paths with a beautiful white wolf on a river in Nunavut; the other was seeing a wolverine in a tree. Having more experiences like that is something that motivates me to keep going.

Why do you think it's important that people pay attention to the Alone across the Arctic expedition?

I’m hoping my journey will inspire Canadians to care more about our country’s wilderness and also to encourage a new generation of Canadians to take a break from electronics and get outside and explore what Canada has to offer. Our wilderness is unlike anything else in the world—I think every Canadian should try to experience it at least once. 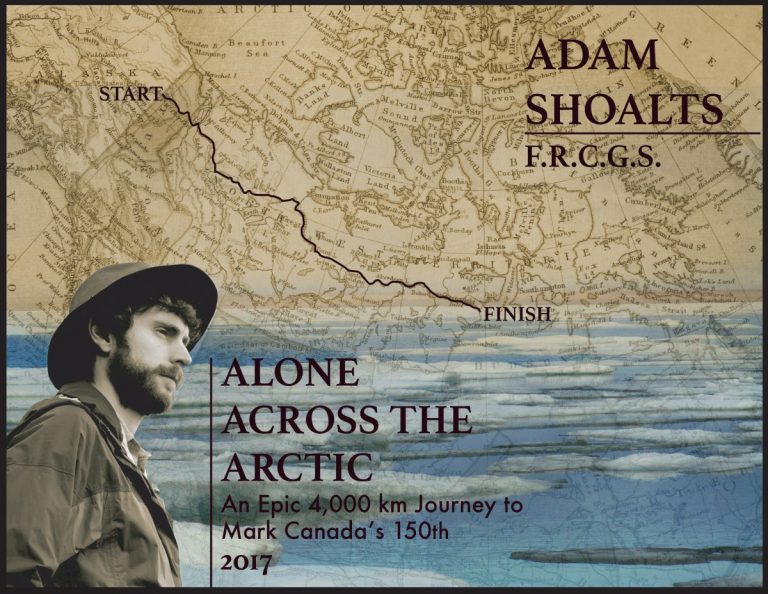