7,600 kilometres. Almost one-fifth of the circumference of the Earth. Just about the entire length of Africa. That’s how far the five members of Expédition AKOR skied, paddled and cycled to complete their colossal sojourn of Canada along its north-south axis, a journey never attempted before.

Seven months ago, a group of friends from Quebec were trying to embark on an expedition two years and hundreds of thousands of dollars in the making in the midst of the Covid-19 pandemic and a locked-down province. Flights had been booked, canoes had been shipped to Nunavut via a charter boat, but a month and a half before they were due to start on Ellesmere Island in the High Arctic, the team was still waiting on the final okay from Nunavut’s public health department.

“We had letters of intention from many, many researchers based in Quebec. We were leading projects in the fields of medical science, kinesiology and forest ecology,” says expedition member Nicolas Roulx. “The logistics of the trip were a nightmare…When we learned [from Nunavut public health] that it would work, we were so, so excited to leave.” 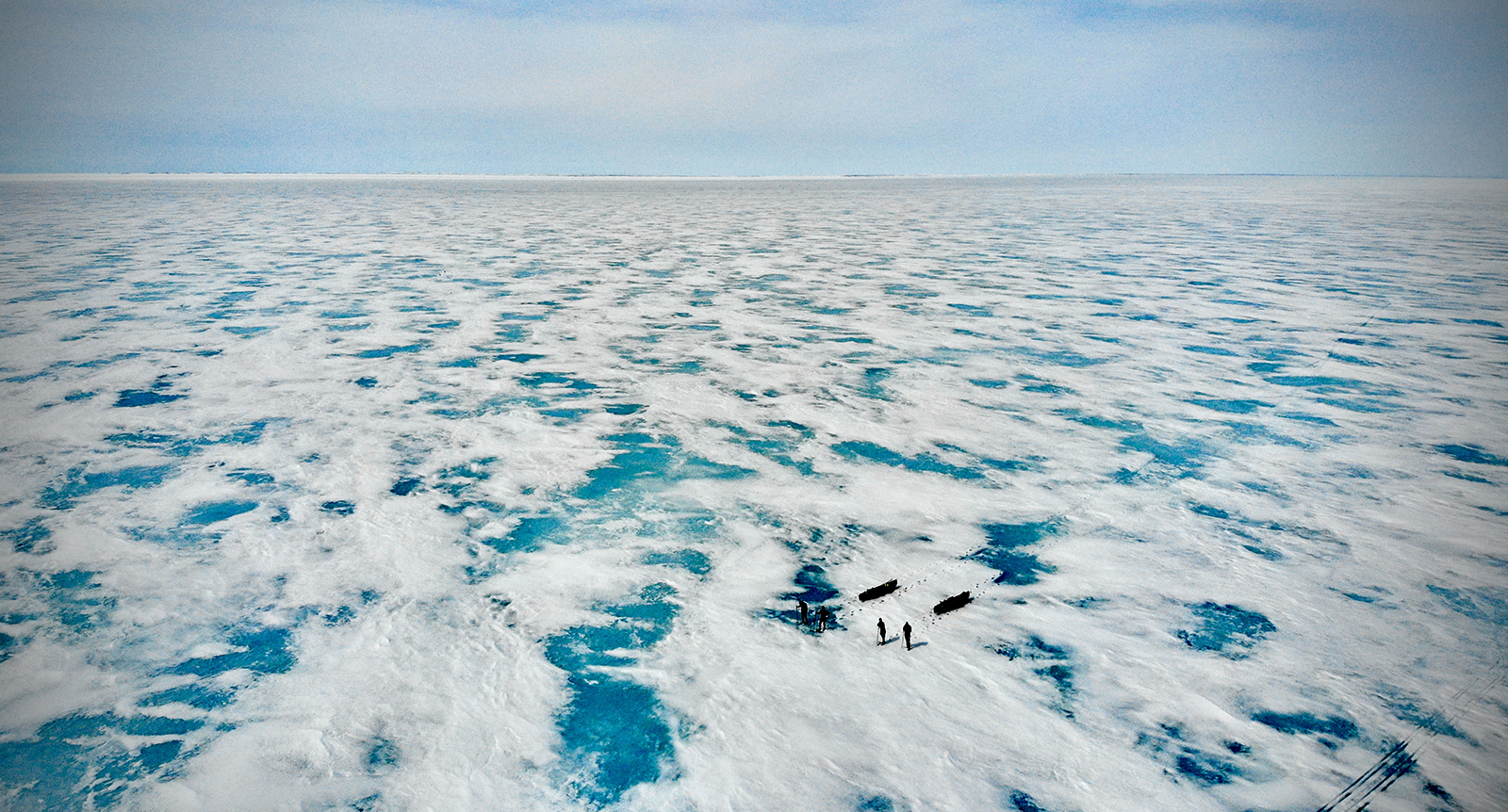 On March 19, Roulx, Guillaume Moreau and Jacob Racine made it —  just barely — to their start point in Eureka, one of the most northern permanently inhabited research stations in the world. They unloaded their gear from a small plane, readied the 135-kilogram loaded sleds each man would pull behind them, popped their ski boots into their bindings, and took off on the first 1,450-kilometre, 64-day leg of their epic journey south. After the first five weeks, Nicolas had lost almost eight kilograms (17 pounds), despite eating 7,500 calories a day, and all the men experienced extreme polar rash, a skin irritation that couldn’t heal on its own in the Arctic’s relatively humid conditions. The crew made it to their resupply point at Resolute Bay just in time — they required urgent medical attention. Little did they know, however, they faced a bigger problem further south.

“We encountered about 15 bears [in total]… we were basically crossing a polar bear highway,” says Roulx. “One night, we had to do shifts in the night to keep an eye on them. At one point, we had four polar bears in our view from the campsite. It was a pretty scary moment.”

When they skidded into Gjoa Haven (Uqsuqtuuq), on the southeast coast of King William Island in the Northwest Passage, the sea ice had already started to break up. Lake-sized turquoise puddles formed on top of the sea ice, making some areas dangerously unstable, while other sections heaved up onto each other, making traversing them more like bouldering than skiing. The team shuffled; Jacob left as planned while Philippe Voghel-Robert and Étienne Desbois joined. 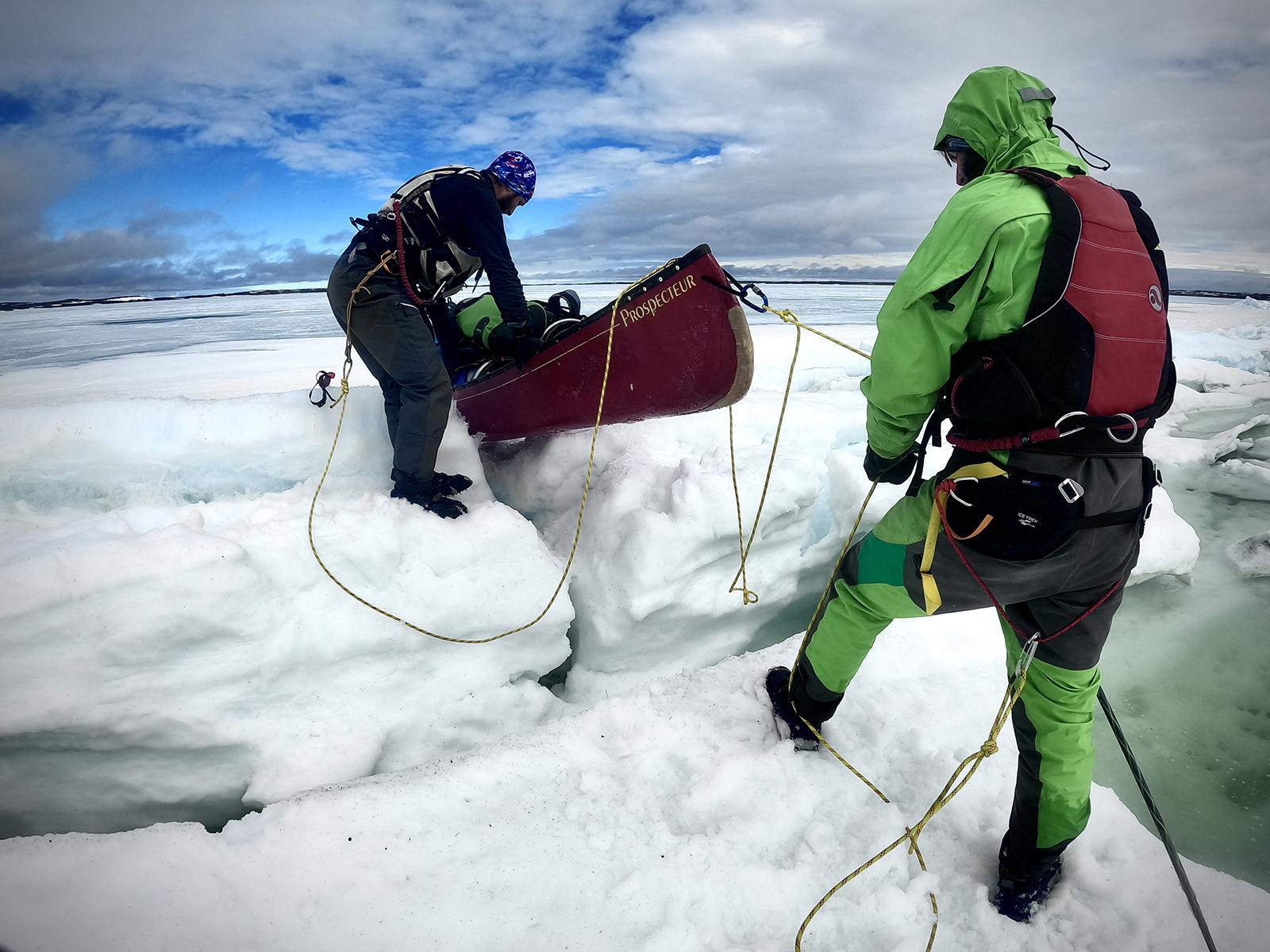 There, the four men started the second leg of their journey, a grueling three-month, 2,000-kilometre paddle against the current across some of Canada’s largest rivers and lakes. They kicked off their skis and hopped into canoes — well, sort of.

“We had to pull our canoes on the ice. The Arctic Ocean was melting underneath us,” says Roulx. “So we did that for about 10 days when we reached the continent.”

AKOR finally set foot on solid ground at the mouth of the Back River in Nunavut, and the slush began to transition to lichen-splotched stone.

“We saw, during that leg, so much wildlife. I mean, one can barely understand how many animals we saw. We saw hundreds of caribou so close to us in herds. We saw a herd of musk ox. Thousands of geese that were finishing their migration,” says Roulx. 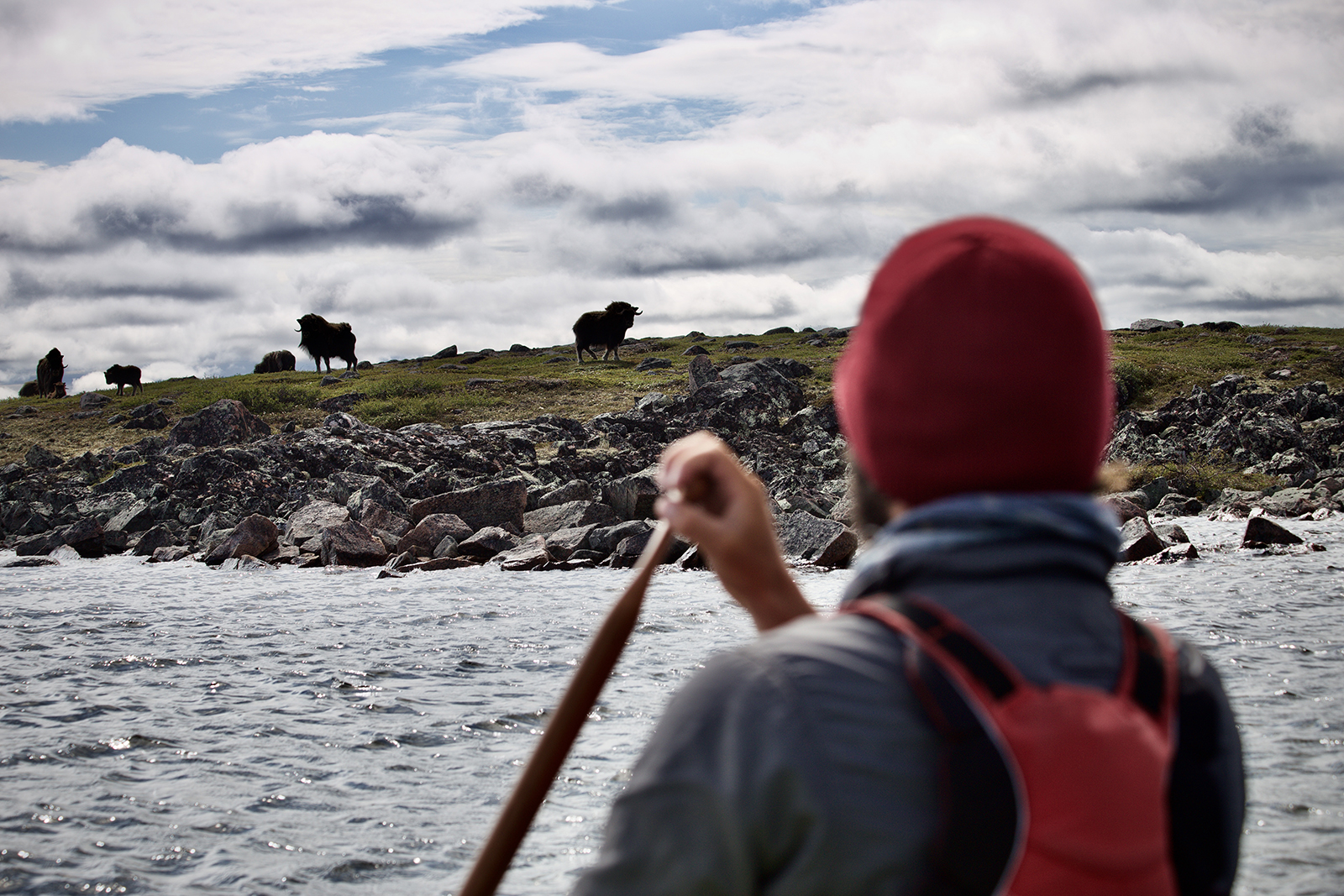 Once inland, wildlife was abundant, like this herd of muskox. (Photo: Expédition AKOR)

AKOR reached the first paved roads in Northern Saskatchewan near Wollaston Lake. Like an outdoorsy version of Planes, Trains and Automobiles, the crew now included Catherine Chagnon, who replaced Philippe Voghel-Robert in the middle of the canoe leg, as well as two new friends, Isabella Donati-Simmons and Béatrice Lafrenière. The new team hopped on bikes and started towards their end point: Point Pelee National Park, Ont. Though this was the longest stretch of their journey by distance — 4,150 kilometres — they completed it in just 44 days.

On November 8, with friends and family cheering them on, Expédition AKOR crossed their finish line at Canada’s southernmost point, completing the longest, human-powered north-south crossing of Canada.

Expédition AKOR had a unique opportunity to contribute to three major scientific projects. The first is part of an ongoing collaboration (this was AKOR’s second expedition; the first was to the Torngat Mountains in 2018) with Université Laval to deepen our understanding of the influence of rapid climatic variation on forest dynamics. The crew took samples of black spruce to determine how their growth was affected by climate change.

The second project is with the Laboratoire des Sciences de l’Activité Physique de l’Université Laval (LABSAP) and the Université du Québec à Rimouski (UQAR) to collect data from team members that will allow a better understanding of the adaptive mechanisms of the human body in situations of very long duration efforts under extreme conditions (cold, wind, etc.).

The third project is a collaboration with the Center of Expertise in Chronic Pain Management in Quebec that looks at whether the physical feats achieved by AKOR can motivate a group of patients living with chronic illness to do more physical activity or complete daily tasks that are otherwise difficult.