Exclusive photos: A first detailed look at the wreck of Canadian schooner Queen of the Lakes | Canadian Geographic

Exclusive photos: A first detailed look at the wreck of Canadian schooner Queen of the Lakes

RCGS Explorer-in-Residence Jill Heinerth and dive partner Teddy Garlock made the first dive on the Queen of the Lakes since her resting place in Lake Ontario was confirmed in 2011
By Jill Heinerth
September 14, 2018

Queen of the Lakes was the longest vessel active on the Great Lakes in 1906 when she sprung a massive leak during a late November gale on Lake Ontario. The schooner, built in Portsmouth, Ont. in 1853, was en route to Kingston with more than 400 tonnes of coal, and started to sink fast. Her captain and crew abandoned ship just in time to watch her disappear into the depths; their yawl had only made it about 15 metres from the wreck site when she went under. Queen of the Lakes came to rest at the bottom of Lake Ontario on November 28 with her three masts standing upright and two davits near the ship’s wheel, used to launch the yawl, still slung out over the rail. 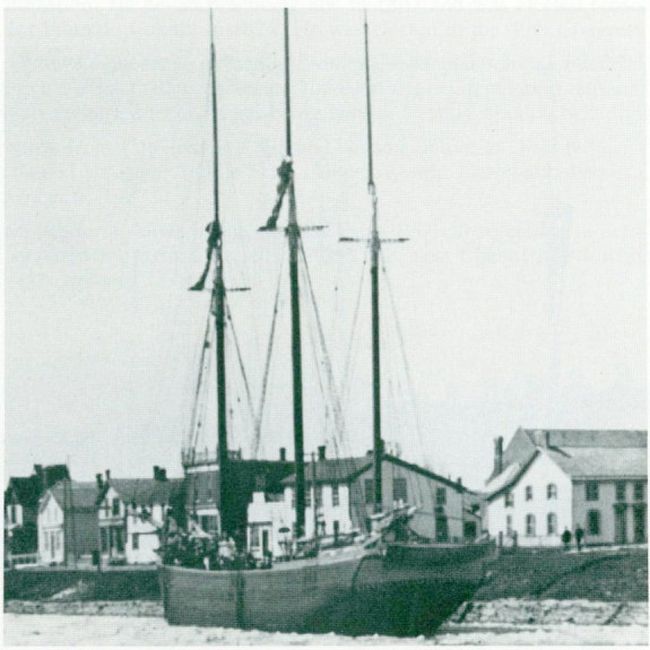 An undated photo of the schooner Queen of the Lakes, built in Ontario in 1853.

More than a century later, in 2009, her wreck was discovered by Dan Scoville, Roland Stevens and Jim Kennard, an electrical engineer by trade and shipwreck enthusiast who has found more than 200 wrecks in the Great Lakes, Lake Champlain, New York’s Finger Lakes, and in the United States’ Mississippi and Ohio Rivers. The team first spotted the stunning view of the entire vessel with a DeepVision side scan SONAR system, and later confirmed the wreck in 2011 with an underwater remote operated vehicle (which took some low resolution black and white images).

On August 30, 2018, I had the opportunity to dive on the undisturbed shipwreck with Teddy Garlock, a paramedic and cave diver I met in a dive shop in Florida. Garlock’s father John was at the helm of our boat and Kennard — a veteran explorer whom Garlock has idolized since he was a teenager — watched the SONAR.

We quickly found the wreck site and dropped directly down onto the old schooner. Since the wreck was well below recreational diving limits, we had to use a helium breathing mix in our rebreather apparatus. When we reached the tip of the ship’s central mast, we saw that the rough structure of the wreck was another 18 metres below us. Descending to the deck, we spotted cables from the sails, a small boiler, a ceramic crock and anchors. She was frozen in time, covered only by a thick layer of quagga mussels.

It is a privilege to have the opportunity to bring back these images, revealing a small piece of Great Lakes history. Photographs from the trip will be donated to the Great Lakes Historical Society, and Jim Kennard will be releasing a book about his discoveries in fall 2018 with the National Museum of the Great Lakes in Toledo, Ohio. Click here for more information and ROV images.

In Canada, shipwrecks are protected by a patchwork of regulations that varies from province to province, and organizations such as Save Ontario Shipwrecks warn new divers against treasure hunting and pilfering historical wrecks. While the Queen of the Lakes lies in American waters under the governance of New York State, the Abandoned Shipwreck Act of 1987 advises that anyone caught removing anything from a Great Lakes wreck that’s more than 50 years old and not privately owned could be charged with a felony. To protect this heritage site and the safety of other divers, this post does not offer the location or depth of the Queen of the Lakes. 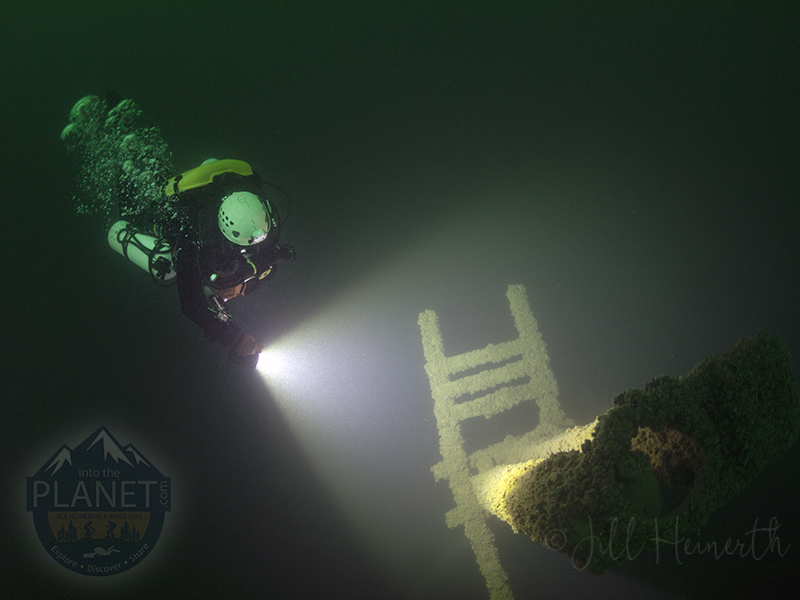 Teddy Garlock shines a light on the crow’s nest on the centre mast. (Photo: Jill Heinerth) 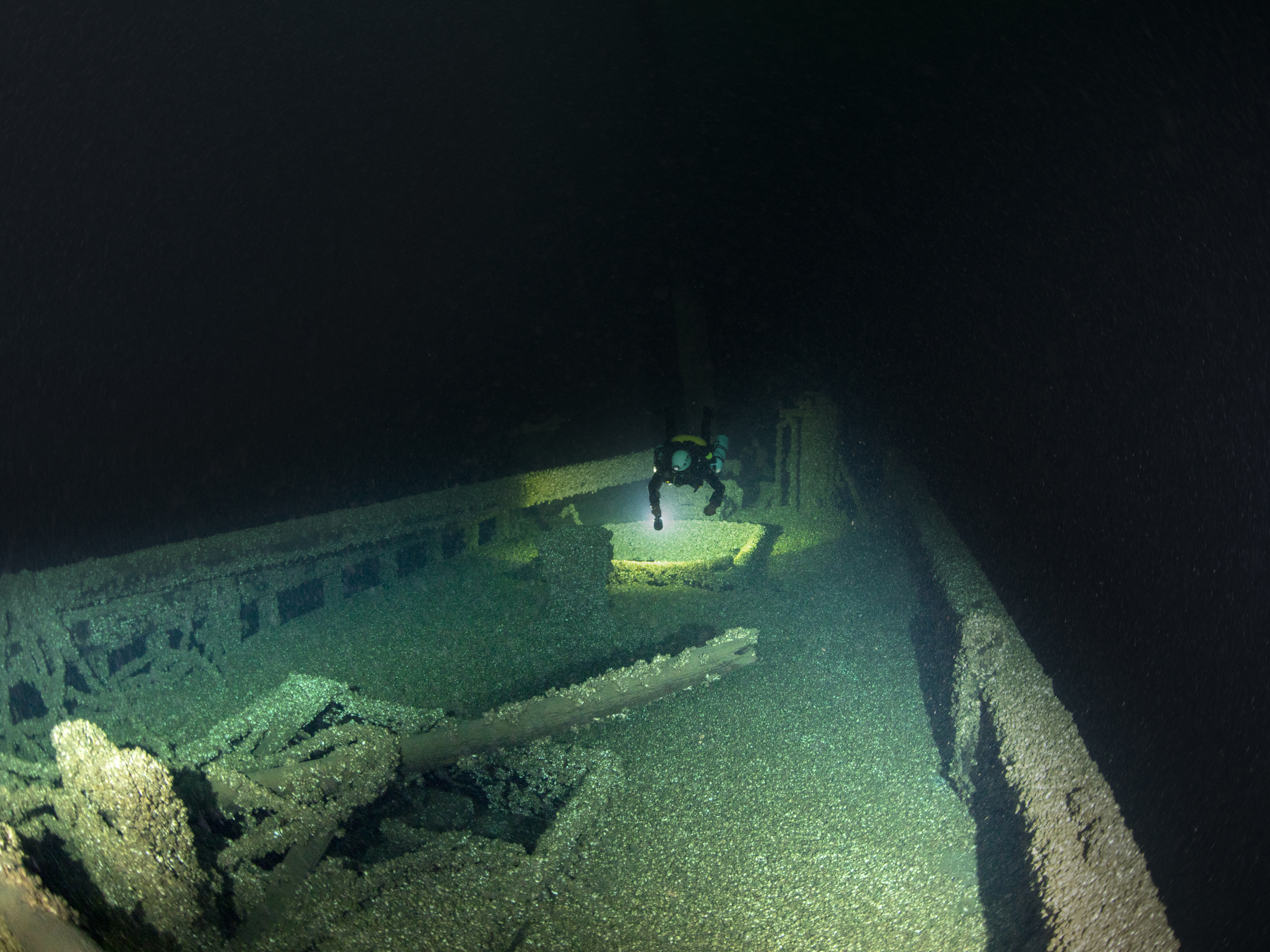 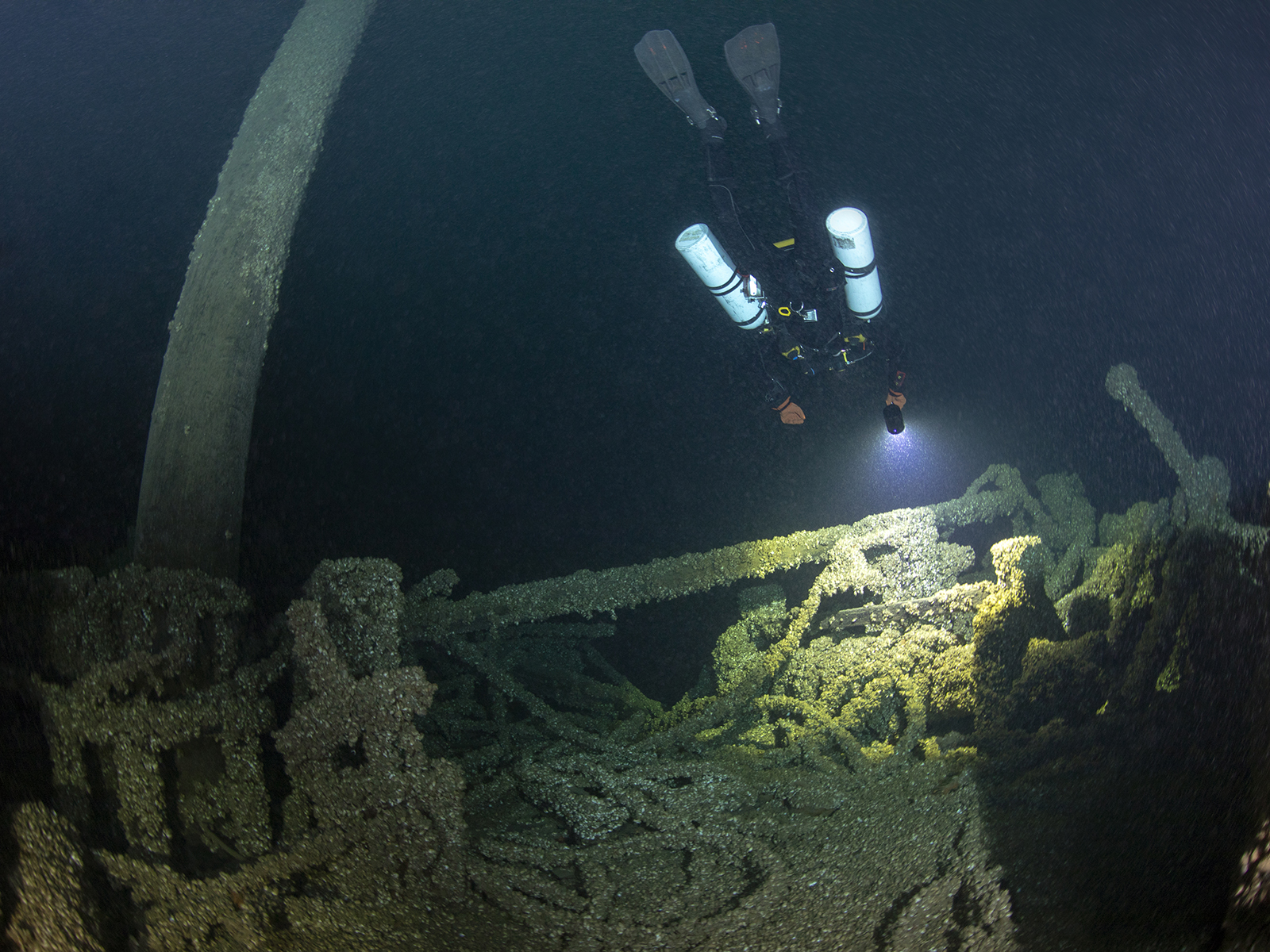 A jumble of cables near the ship's bow, likely rigging from the sails. (Photo: Jill Heinerth) 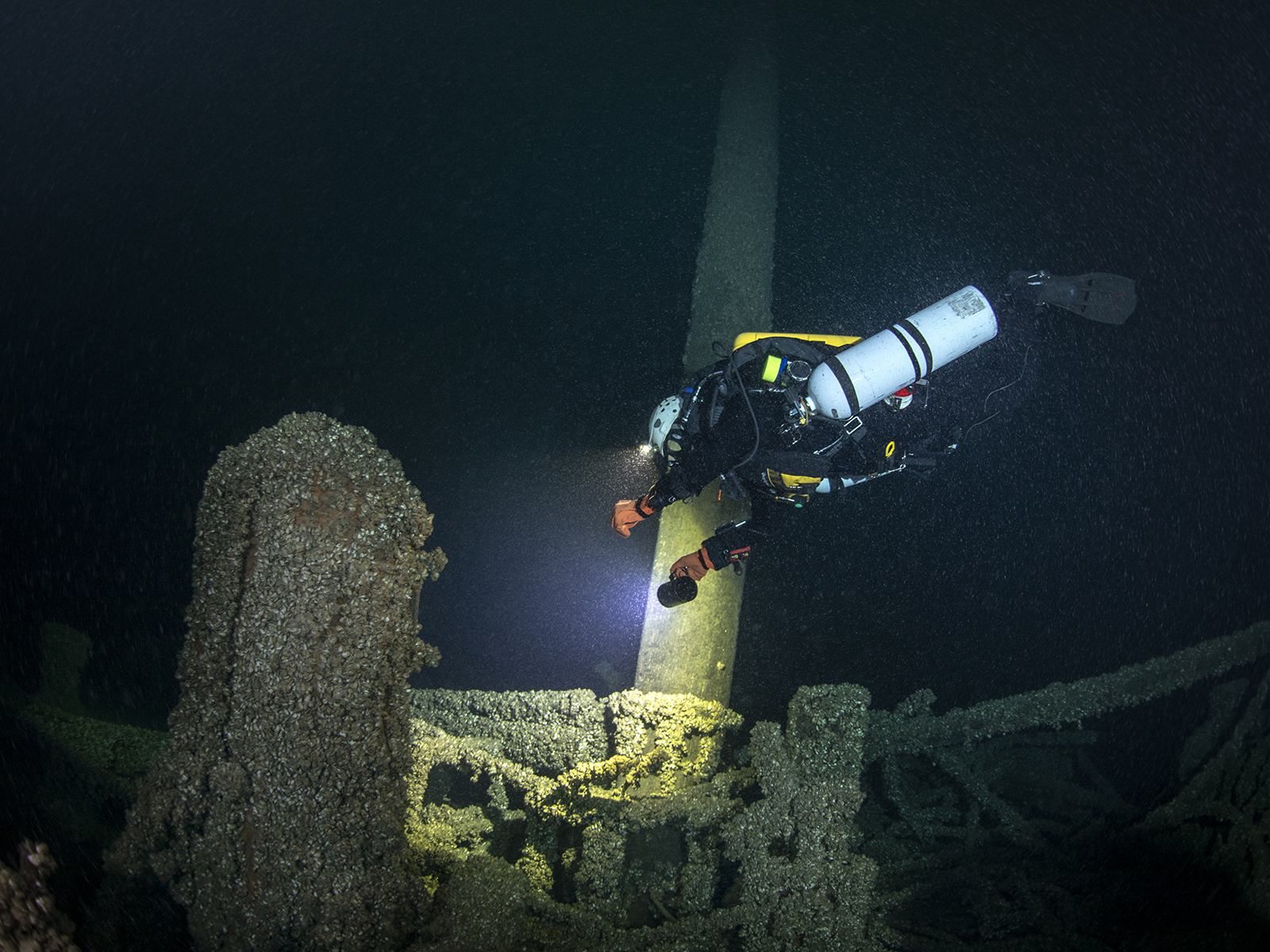 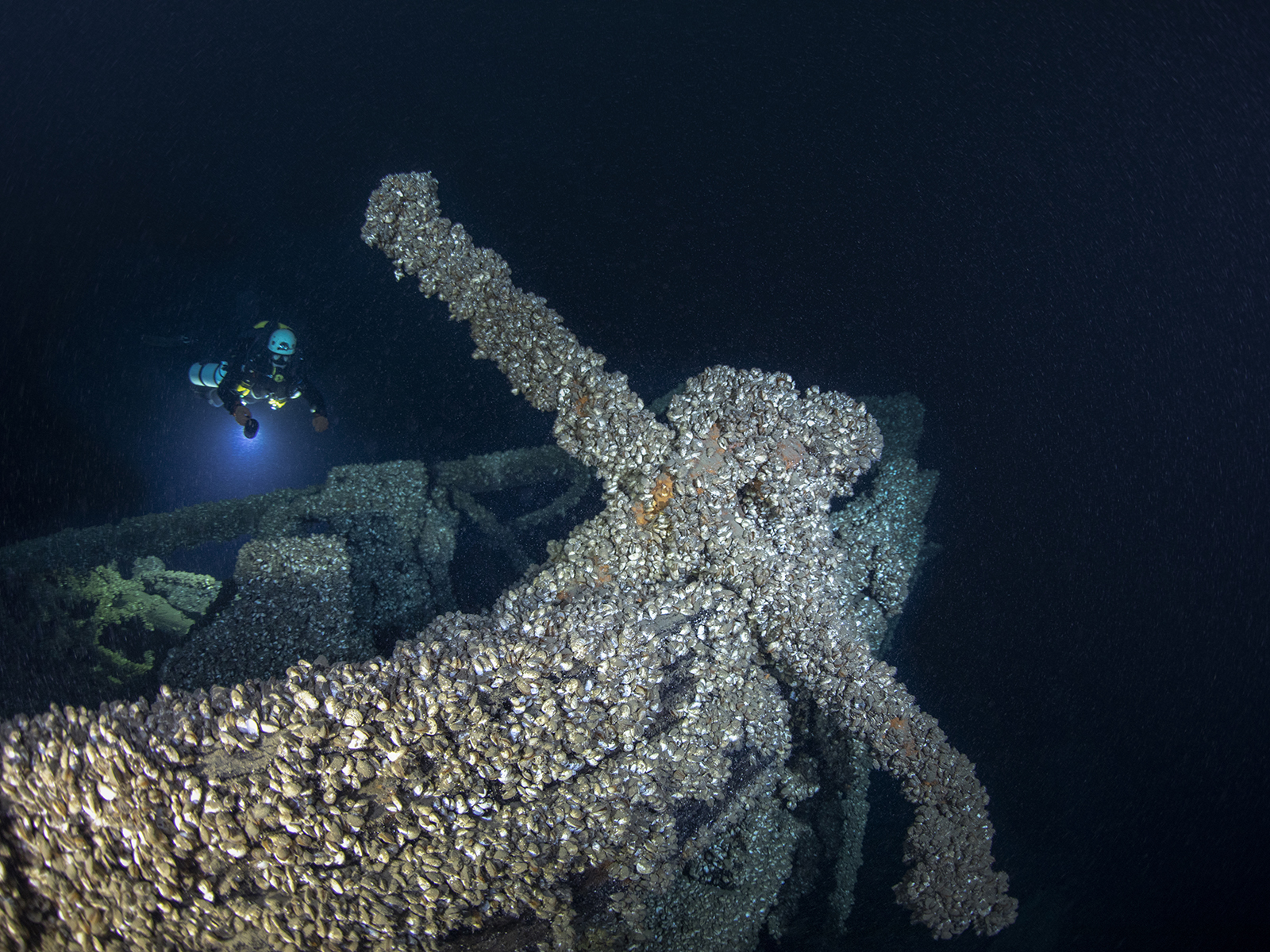 An anchor on the bow. (Photo: Jill Heinerth) 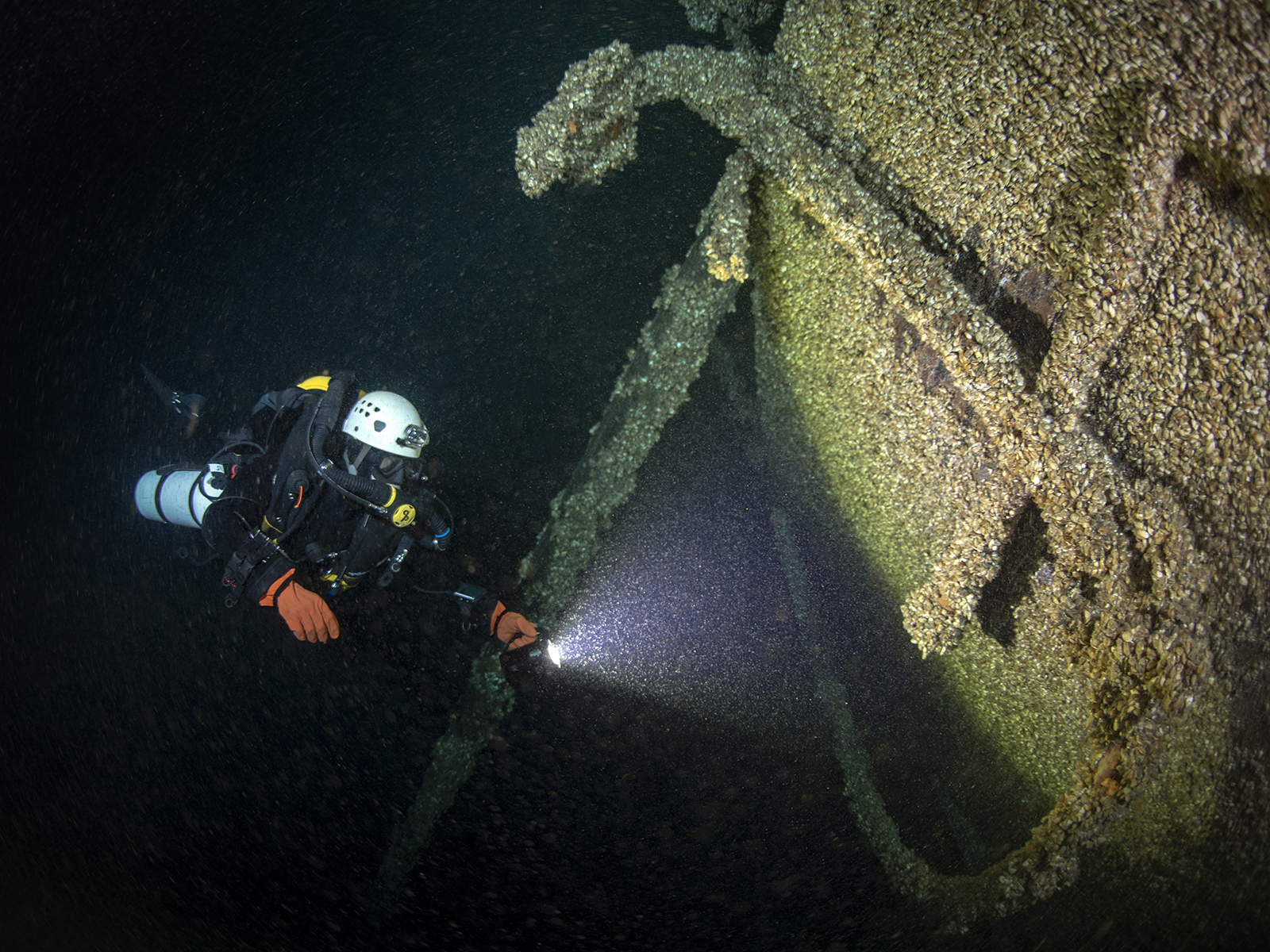 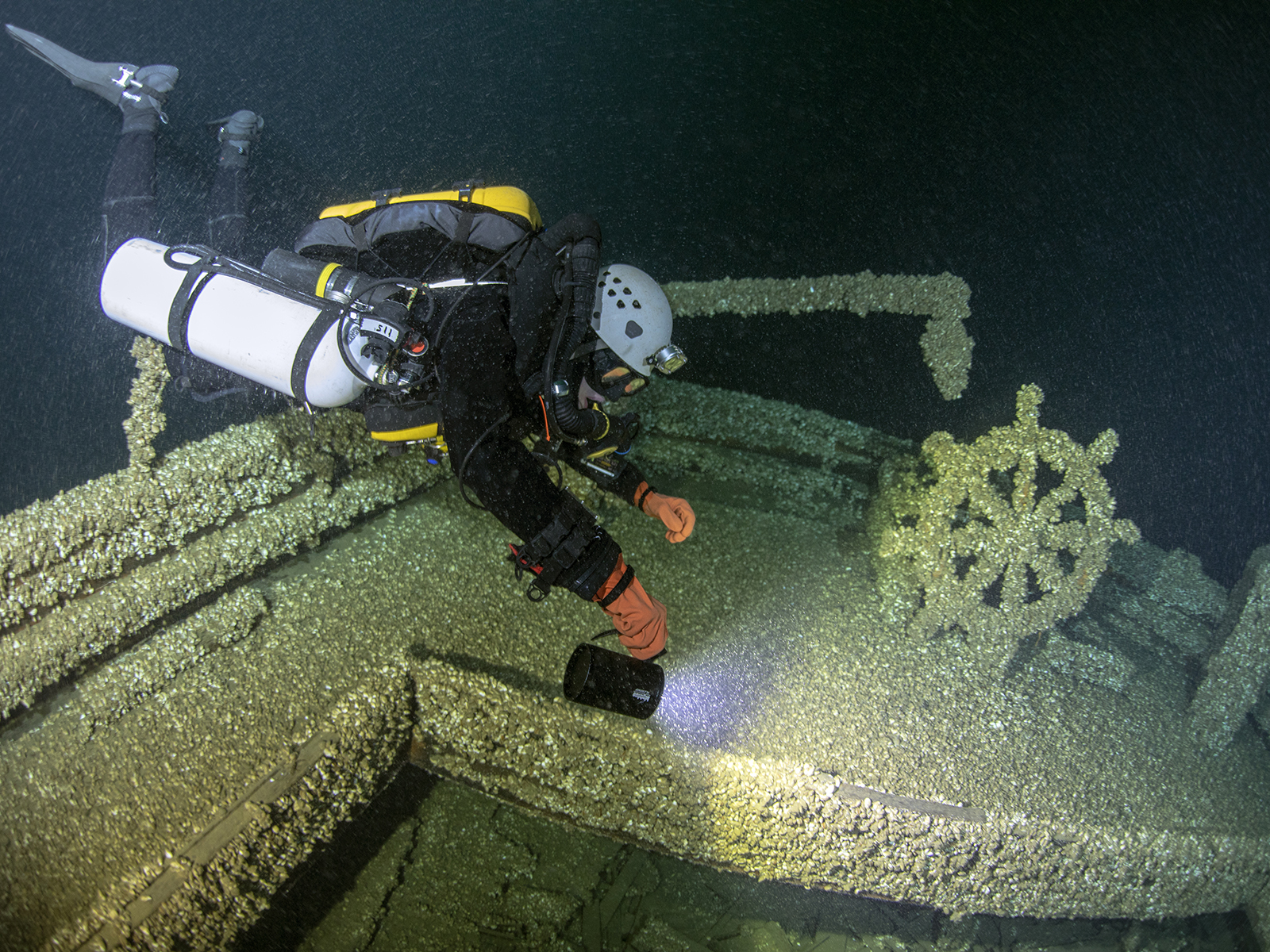 The ship’s wheel, with the davit for launching the yawl visible in the background. (Photo: Jill Heinerth) 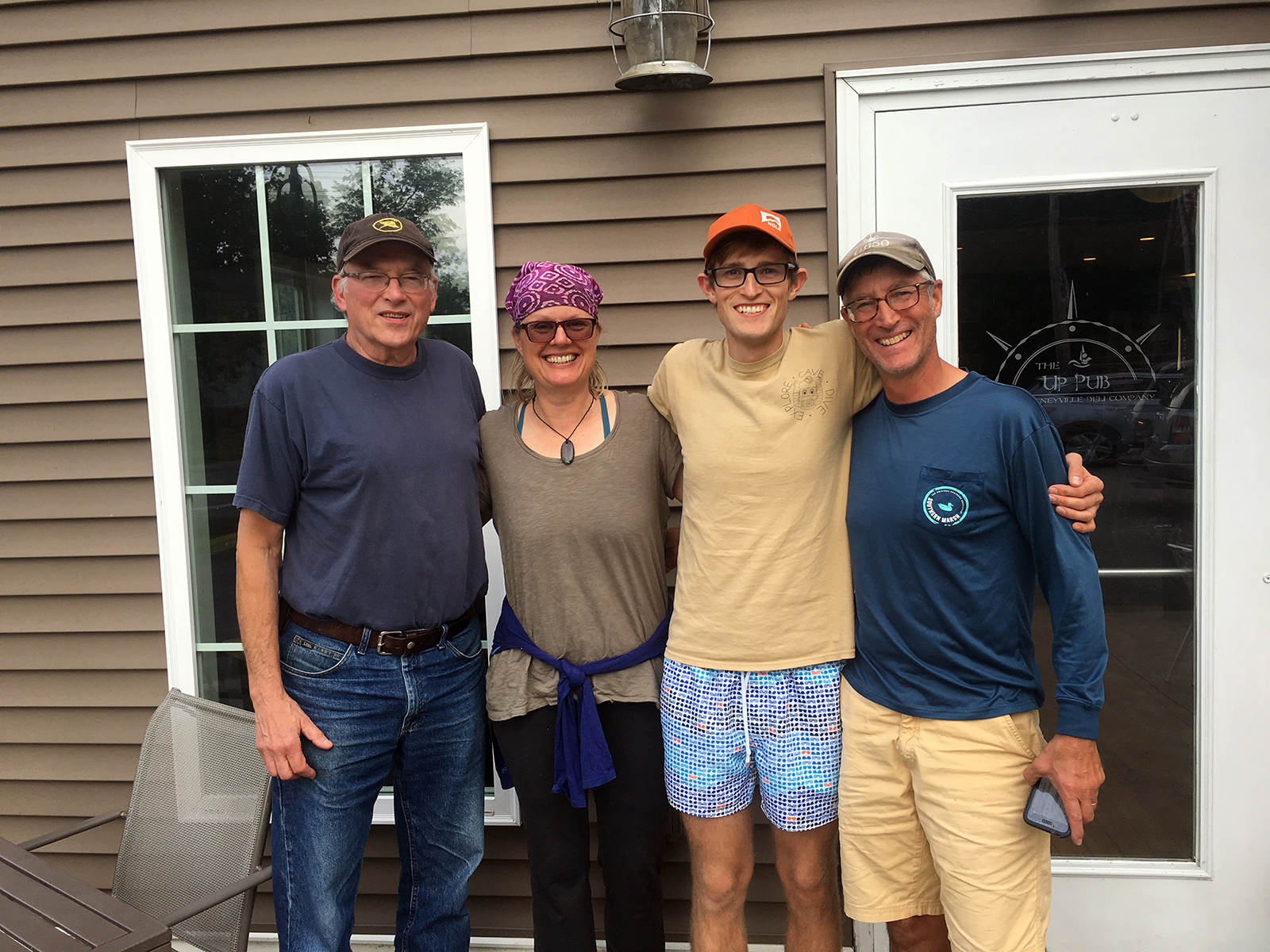