Excerpt from The Way Of The Gardener

The Camino de Santiago route thorugh Spain to the tomb of St. James is a pilgrimmage taken by many: the devout and adventure-seekers alike. But for Lyndon Penner, it was a journey of a differnent kind: it was a pilgrimmage of botany.

Read an excerpt below:

All along the way to Rabanal del Camino, where we stopped on the night of October 19, there were black elderberries growing in the ditch. Their clusters of shiny black fruits, which admittedly were covered in dust, were so abundant they almost looked like flowers. I thought it was very appropriate to be met with bouquets of black blooms following what I am sure was a brush with near death. (I’m overly dramatic sometimes.)

After the monotony of the meseta, I was amazed at how exquisite the landscape became again after Astorga. We were crossing into the lush, rainy region of Galicia, the greenest corner of Spain. Forests of oak and pine with great blankets of bracken fern spreading out beneath them became the norm. Mysterious blue-green mountains in the distance started to become visible, and once more there were great towering oak trees. I figured out that they were most likely Pyrenean oaks (Quercus pyrenaica), and their acorns once again littered the ground. Hawthorn, bird cherry, birch, and mountain ash also became common as we continued to make our way west to Santiago. The next day, on the road from Rabanal del Camino to El Acebo de San Miguel, I discovered one of the most beautiful chestnut trees I had ever seen. Chestnuts are relatives of the oaks, and I was aware of their existence, but the Camino was the first time I really had the opportunity to observe them up close and personal. 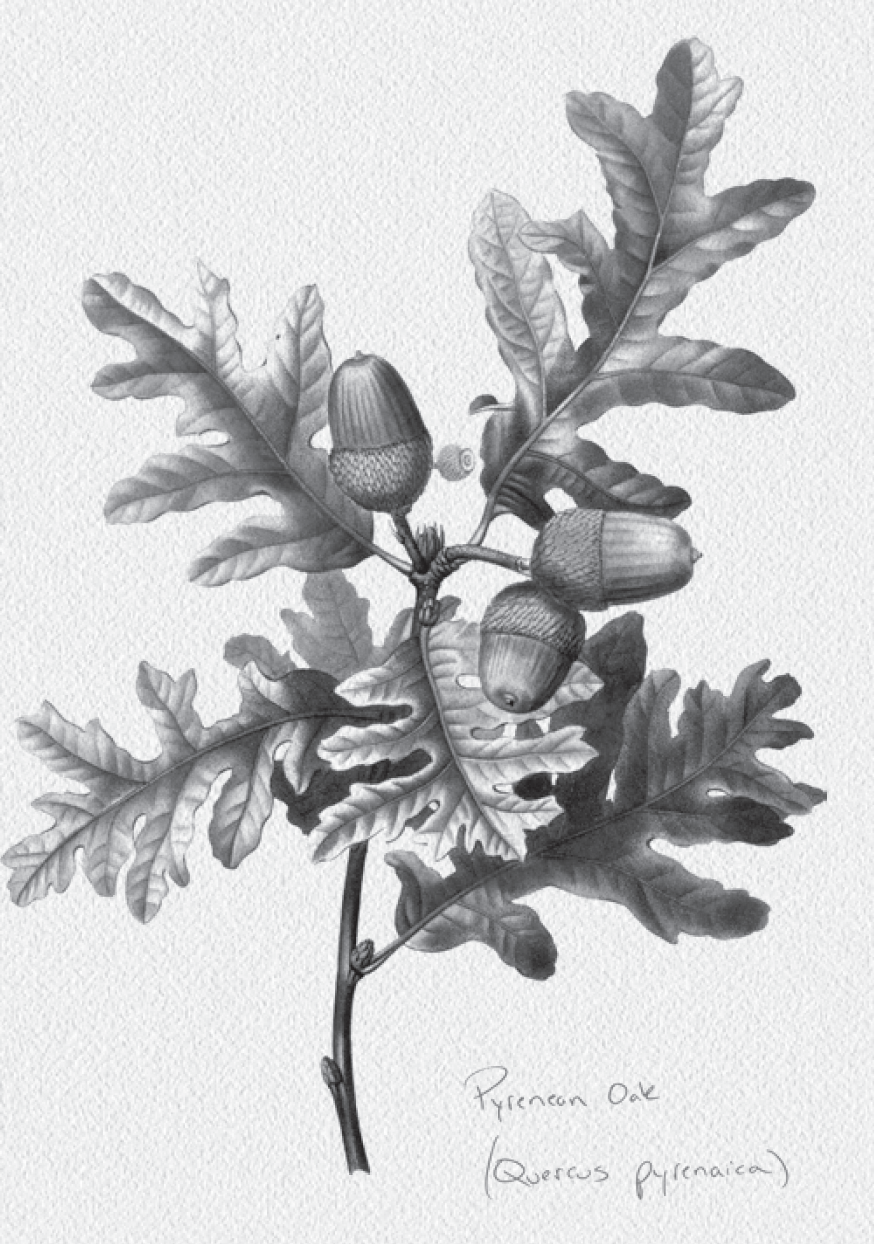 Sweet chestnuts (Castanea) should not be confused with horse chestnuts (Aesculus). Both are common throughout Europe. There are twelve species of sweet chestnut, and they are native to Europe, North America, and northern Asia, with many species being ornamental as well as useful. Well-drained, acidic soil with good moisture conditions suits them best. They are unfortunately not prairie hardy; the very toughest of them might survive in zone 4 or 5. If I lived somewhere that they would grow, I would definitely consider planting one. The nuts have been a food source for thousands of years. Alexander the Great and the ancient Romans planted them widely, and the Greek physician and botanist Dioscorides not only wrote of them, he complained that overindulging in them made him flatulent. In France and Italy they have been known for generations and were often disregarded as being the food of the poor.

The American chestnut (Castanea dentata) was once one of the most widely planted, most loved trees in North America. Although the flowers have an unpleasant smell, the tree produces gorgeous dark-green foliage and very large, delicious nuts held in prickly burs. The nuts fall when ripe. Because it casts a dense and heavy shade, it was considered an ideal tree for parks. Sadly, the American chestnut has been all but wiped out. In the early 1900s, chestnut blight was discovered in New York State. It spread from there and quickly wiped out nearly every American chestnut on the continent. A few still exist, but they are badly infected and are only just clinging to life. Researchers continued to look for a cure into the 1930s, but no real progress was ever made. European species are largely immune to this malady, and efforts have been made to produce hybrid offspring that contain the best traits of both and none of the disease susceptibility. Thus far, these efforts have not been completely successful. 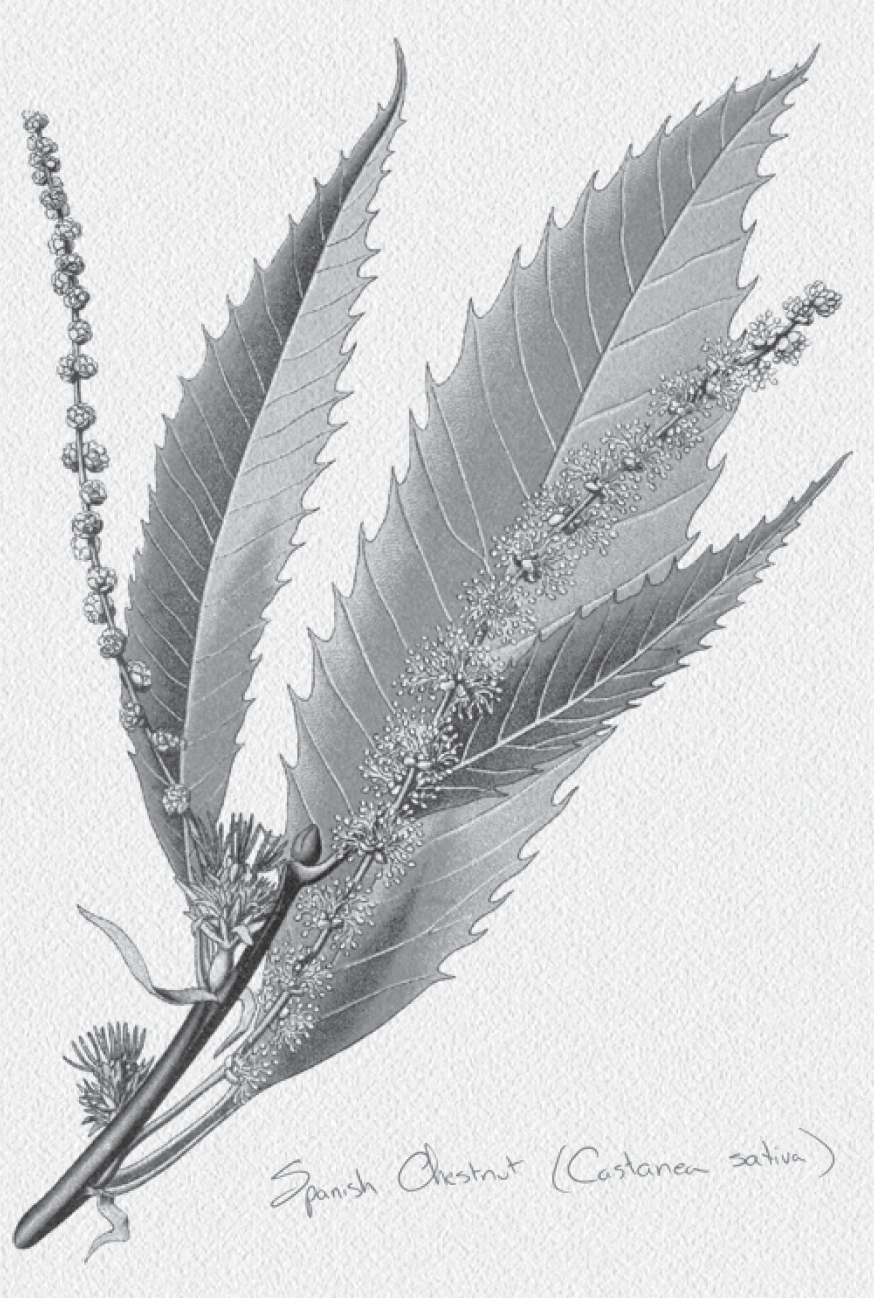 The Spanish chestnut (Castanea sativa), the species I encountered on my journey, comes from southern Europe and western Asia. It is a gorgeous and fast-growing tree that reaches sixty feet. The delicious nuts are considered a delicacy. Many hybrids have been developed. These are the chestnuts of commerce, with ‘Colossal,’ ‘Nevada,’ and ‘Schrader’ being the best-known cultivars. They produce larger nuts than either of their parents, and they are also more vigorous and produce bigger crops. They are sometimes planted as ornamentals, and their brilliant yellow fall colour is quite beautiful.

Chestnuts are very nutritious and are peculiar in being the only nuts known to contain vitamin C; they are also self-sterile, incapable of pollinating their own blossoms. To obtain a crop, two trees must be grown reasonably close together. Sicily is currently the world’s leading supplier of chestnuts, but France and Portugal also produce a large quantity.

The horse chestnuts (Aesculus) and their American relations, the buckeyes, are not related to the true chestnuts. The common name is a corruption of “coarse” chestnut, and they were so called to distinguish them from sweet chestnuts. No species in this genus produces edible nuts. These are slow-growing, wide-spreading trees that can reach significant sizes and are found in nearly every major city in Europe. They cast a heavy shade and are ideal for front yards or parks. Their candle-like flower clusters in the spring are very ornamental, and their large, stone-like reddish brown seeds cover streets and sidewalks in the fall. All have beautiful foliage: the leaves are divided into numerous leaflets, somewhat resembling a hand. The seedpods are prickly and split open when fully ripe to reveal shiny, smooth, rather beautiful seeds. (Squirrels will eat these; humans will not.) The prickly husks are painful if stepped on in bare feet, and the British know them as “conkers.” All of these trees are easy to cultivate, but they do grow from a taproot and are very cranky about being disturbed. They are prone to suffering long bouts of transplant shock and should be planted as small as possible, ideally as seed. Sowing the fresh seed in fall generally results in germination the following spring.

A rich, fertile soil with good moisture conditions will suit them, though they are extremely drought-tolerant once established. Furthermore, they are very prone to windburn, particularly when young, and if at all possible should be planted in a sheltered site. Horse chestnuts are often the last trees to leaf out in the spring and are not subject to pests or disease, and they rarely need any pruning. They are much planted on both the east and west coasts but little seen on the prairies.

By far the hardiest species in the family are the European horse chestnut (A. hippocastanum) and the Ohio buckeye (A. glabra). European horse chestnut is officially hardy to zone 4. It can reach sixty feet in height and is native mainly to Albania and northern Greece at high elevations. The cream-coloured to ivory flowers are produced in great profusion, then comes a huge crop of the famously inedible nuts. Although this species is not well suited to the prairies, mature and stunning examples of these trees can be found in Edmonton, Camrose, and Calgary. In most cases, they were grown from seed and nurtured and pampered until they were able to adapt to the climate.

Ohio buckeye is the state tree of Ohio, and as the name implies, it is native to central and eastern North America. It can grow into a very large tree of fifty to sixty feet, but it is slow growing and infrequently planted. The large leaves are quite splendid and although the blossoms are not as showy or profuse as A. hippocastanum, they are still certainly attractive. The large clusters of seeds that follow provide food for squirrels and deer. The seed is an enormous roundish ball that ranges from reddish brown to dark brown. It is encased in a prickly husk about the size of a walnut, and as they ripen, the husks start to break open, revealing the large, shiny seed inside. With a little imagination, one could imagine it was the dark-brown eye of a deer peering out at you, hence the common name of buckeye. The seeds are so smooth and polished-looking that I keep a bowl of them here on my desk just to be decorative. Sometimes I pick them up and marvel at their beauty. The trees’ fall colour is highly variable: yellow is the usual, but orange and red are not unheard of, and some years they produce no bright fall colour at all. Both of these trees are easily grown from fresh seed sown in the fall, and mature specimens exist in Saskatoon, Regina, Calgary, and Edmonton.

Lyndon Penner has worked as a radio gardening columnist, horticultural consultant, and professional landscape designer and has been gardening since the age of three. He appears frequently as a guest speaker at universities, colleges, and gardening associations in western Canada and is the author of several gardening books.

Excerpt of The Way Of The Gardener Copyright © 2021 Lyndon Penner, excerpted with permission of University of Regina Press.