Glaciers play a vital role in sculpting the landscape, and their retreat can bring about drastic consequences
By David Hik and Zac Robinson
December 11, 2020

This past autumn alarm bells have been ringing loudly in Canada’s mountains. Again. New evidence indicates that iconic mountain spaces, our glaciers, and unique species, such as mountain caribou, are disappearing.

Canada’s mountain glaciers are essential water towers, a source of freshwater for most of the rivers that flow across the prairies and to the Pacific and Arctic oceans. The loss of mountain glaciers will affect a range of human activities, including winter and summer tourism, critical habitat for fish and wildlife, and the availability of water for communities and for agricultural irrigation. Current models predict that western Canada will lose most of its glacier ice volume by 2100 — that’s within a single average Canadian lifespan — with significant downstream consequences for the rivers they nourish.

Canada’s extensive mountain ranges have also provided a refuge for plants and animals during past periods of both cold and warm climates. In many places, mountains are high enough to have escaped being scoured by the continental ice sheets, and their complex topography provides numerous microhabitats or places for species to persist and adapt as conditions change. As a result, mountains are some of the most biologically diverse ecosystems in the world. But news this fall that a population of mountain caribou were extirpated from Jasper National Park highlight the pressures facing many mountain species. 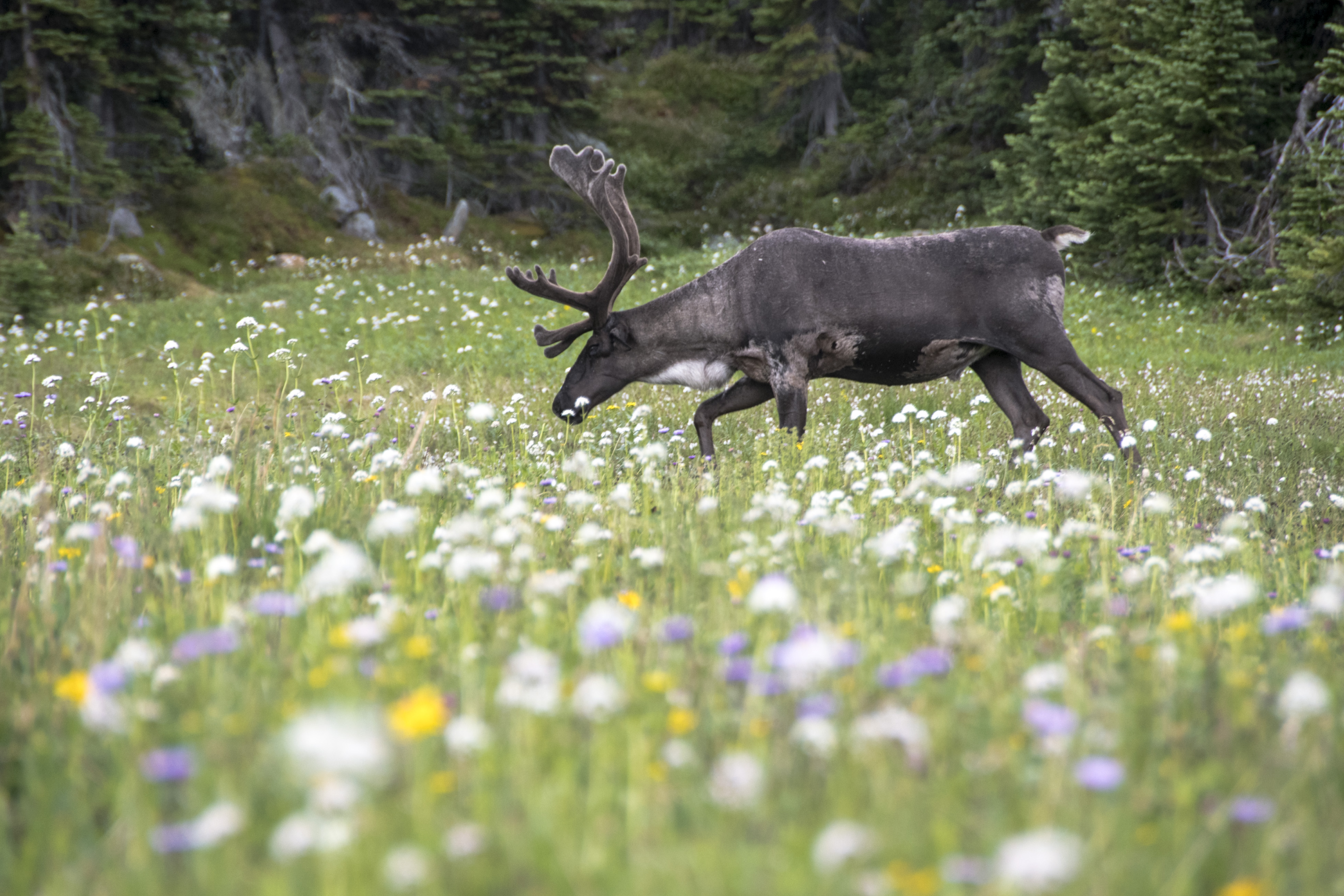 Since 2018, the Alpine Club of Canada has published a national State of the Mountains Report annually, produced in collaboration with mountain researchers, community members, and partner organizations from across the country (including Canadian Geographic and the Royal Canadian Geographical Society). Sustainability and stewardship in mountains has long been a foundational pillar of Canada’s mountaineering community. The Report provides summaries of our current understanding about our changing mountain environments, based on current research and perspectives from across academic disciplines and beyond.

Looking back across the last three reports and the 40-plus essays written by Canadian experts, it’s hard not to notice a variety of worrying trends. Rising summer temperatures and changes in winter snow cover suggest that mountain biodiversity may be greatly affected, with perilous consequences for the survival of many globally-important alpine species.

Contributions have documented changes in alpine treelines, butterflies, mountain sheep and goats. In the 2018 Report, Kathy Martin describes how Canada’s mountains provide birds with high quality habitats for breeding and migration, a role that becomes increasingly important given the more rapid loss of lower elevation habitats. One quarter of the bird species using our mountains are on national or continental lists of conservation concern, including Bicknell’s Thrush, Rufous Hummingbird, and Western Meadowlark. In 2019, Layla Neufeld outlines the measures being implemented by Parks Canada to protect mountain caribou populations, while also acknowledging the challenges. But despite these efforts, the Maligne caribou herd in Jasper National Park was officially extirpated in September 2020. And the Tonquin and Brazeau herds, the two remaining southern mountain caribou populations in the park, remain in a perilous state with few breeding females surviving.

Glaciers play a vital role in sculpting the landscape, and their retreat can bring about drastic consequences. In the 2018 Report, Dan Shugar and John Clague describe what happens when glacier-fed rivers are diverted from their usual course. Shugar and his colleagues have also documented a 50 per cent increase in the volume of water in glacial lakes around the world since 1990. This increase poses a higher risk of floods, damage to infrastructure, and the disruption of downstream ecosystems.

In the 2018 Report, Mike Demuth reports on the Wapta Icefield, one of the southernmost icefield complexes of the Canadian Rocky Mountains and a high mountain headwater for the Columbia and Saskatchewan-Nelson river systems. The Wapta’s well-studied Peyto Glacier has likely lost over 70 per cent of its mass since it was first measured in the 1960s, and its demise is representative of larger changes. According to Valentina Radić, British Columbia and Alberta together contain more than 15,000 mountain glaciers, totalling roughly 29,000 square kilometres of glaciation. Estimates based on remote sensing indicate that glaciers in B.C. and Alberta have lost about 11 per cent and 25 per cent of their area, respectively, over the 20 year period between 1985-2005. And recent simulation models show that, by 2100, the volume of glacier ice will shrink by another 60 to 80 per cent. 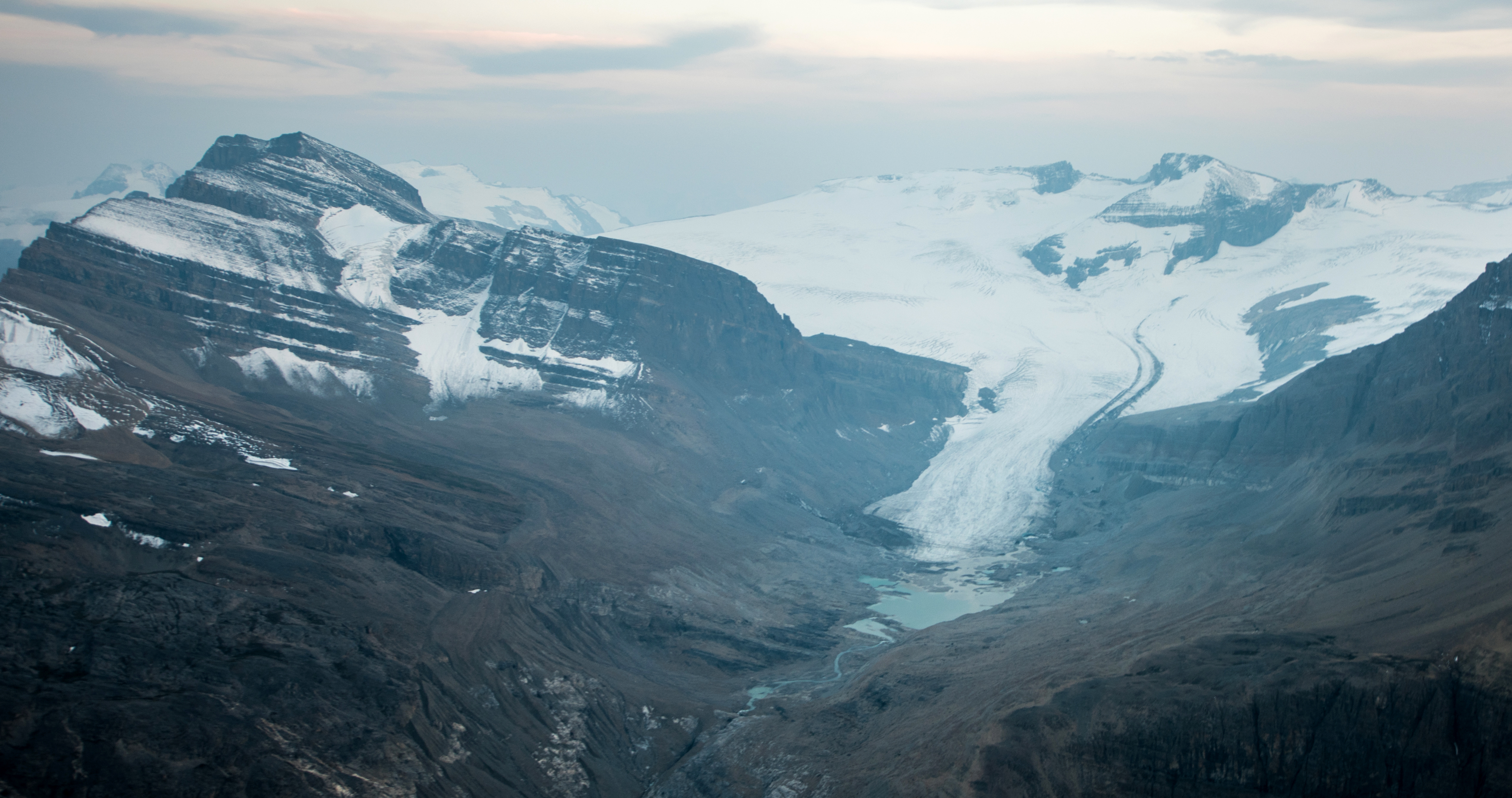 As true of the vast majority of glaciers worldwide, the Peyto Glacier in Banff National Park has been retreating rapidly, especially since the last half of the twentieth century, and has reportedly lost 70% of its mass since it was first measured. (Photo: Ian Holmes)

For Canada’s mountain communities, many of which are dependent on vulnerable sectors such as tourism, forestry and agriculture, climate change will bring adaptation challenges best met with early acknowledgement and planning. This resilience will require information and knowledge, and will involve building community adaptation literacy to understand the risks and actions needed for endurance and success. In the words of Kevin Hanna, “Forewarned is forearmed.”

Even more important, research in traditional territories of Indigenous communities needs to be driven in some large part by the people who live there. Tosh Southwick and Kate Ballegooyen (2019), and Norma Kassi (2020), outline how this can be achieved through the co-production of knowledge, which, at its foundation, begins with mutual respect, dialogue, and exchange. For example, the new Canadian Mountain Network is supporting innovative research bringing Indigenous knowledge and Western science together in collaborative partnerships to inform and enhance decision-making.

Perhaps it is reassuring that the scientific community is able to study and document the changes in mountains, our great natural sentinels. But this knowledge has also forced us to recognize the irreplaceable loss of spaces and species, in Canada and around the globe. For example, in August 2019, a funeral ceremony was held in Iceland to commemorate the demise of Okjokull glacier, and a similar commemoration was held the following month at the Pizol glacier, in the Glarus Alps of northeastern Switzerland. And in October 2020, a ceremony in Oregon, USA, marked the demise of the Clark glacier. 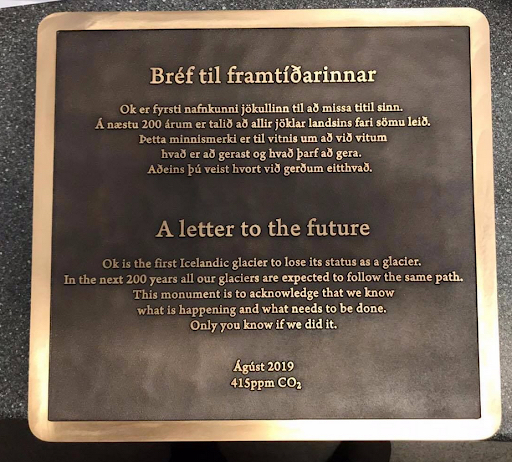 This plaque commemorates Okjokull, which once sat atop Ok volcano — “jokull” is Icelandic for glacier. The glacier was officially declared dead in 2014 when it was no longer thick enough to move. The dedication, written by Icelandic author Andri Snaer Magnason, ends with the date of the ceremony and the concentration of carbon dioxide in the air globally — 415 parts per million (ppm).

In a 2007 essay entitled “How glaciers became an endangered species,” Mark Carey underscored the need to understand how glacier retreat has produced far-reaching consequences, and societies and communities living in and near mountains have had to contend with and adapt to these impacts — impacts that go well beyond the loss of playgrounds, scientific laboratories, and wilderness. The World Heritage Program of the International Union for the Conservation of Nature has also considered glaciers as analogs to endangered or flagship species, whose conservation would secure wider environmental and social benefits at global scale. The salient comparison was recently echoed by Shawn Marshall, Science Advisor at Environment and Climate Change Canada: "If glaciers were alive,” he wrote, “they would be endangered species.”

But recognizing glaciers or mountain species as endangered will not alone change the alarming trajectory we are currently on. Indeed, on December 2 the World Meteorological Organization announced that 2020 was on track to be one of three warmest years on record. Decisive actions, by governments, businesses, and individuals, to reduce greenhouse gas emissions and prevent unprecedented and irreversible consequences of climate warming are urgently required.

Sadly, all points indicate there are more funerals to come.