To effectively protect wilderness, Canada must get strategic, researchers say

As time runs out for Canada to meet its 2020 conservation targets, a new study aims to help governments and the public identify priority areas for protection
By Katherine Lissitsa
May 30, 2018

Canada must be strategic if it is to meet its conservation commitments, according to a recent study. That means moving quickly to protect land with high ecological value.

Developed by 17 independent researchers in fields ranging from fisheries management to environmental law, the study, published earlier this month in the journal Facets, outlines a science-driven approach for identifying geographic locations that best match conservation goals.

Canada has pledged to protect 17 per cent of its land and freshwater by 2020, but according to the study, has only achieved about 10 per cent of that target to date. That leaves a significant commitment to fulfill in the next three years, but one that will be possible with the help of scientific data, says conservation biologist and lead researcher Laura Coristine. “The idea was, how can we do science that’s going to make a big difference and improve the way we’re looking at making decisions around the environment?” 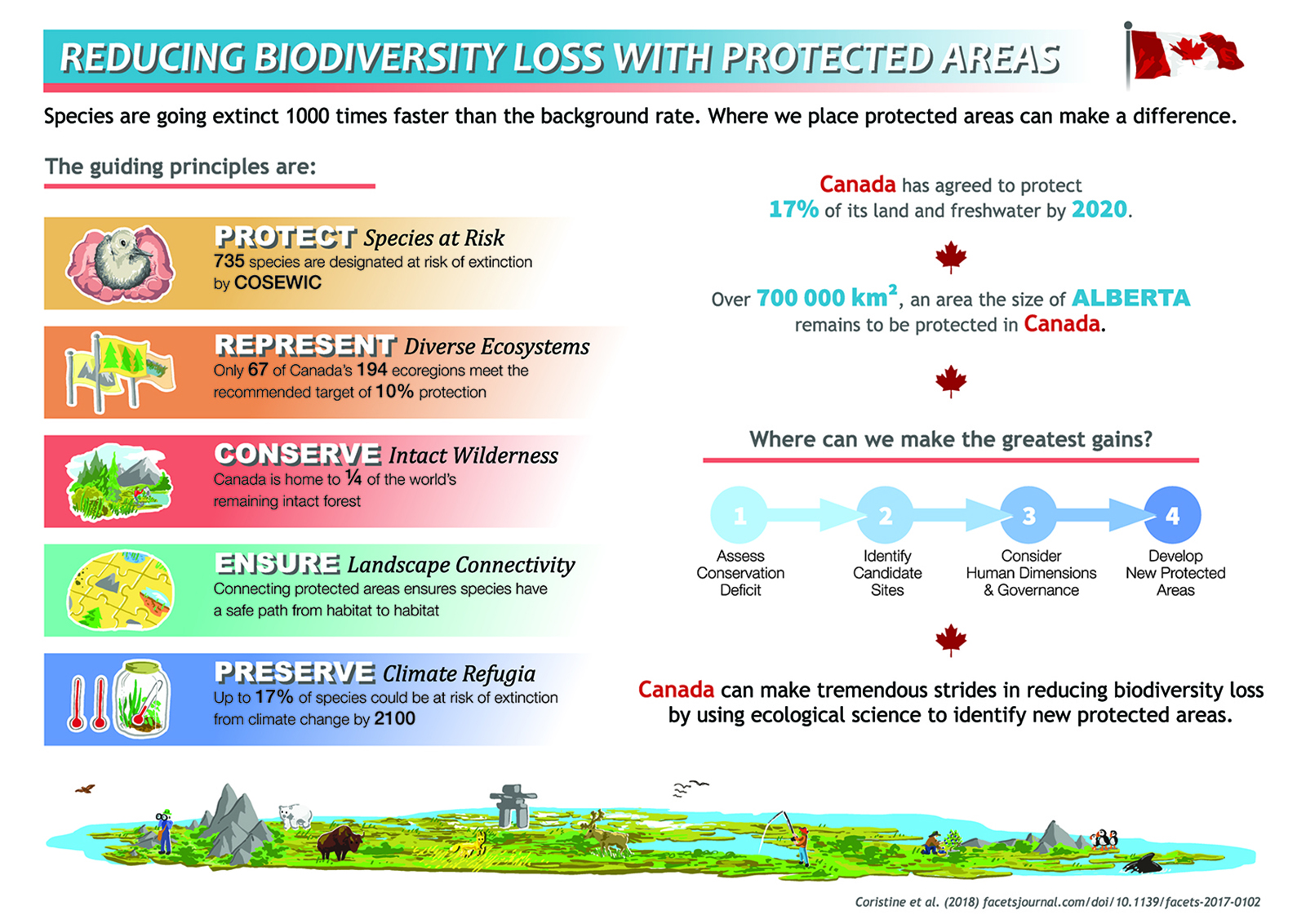 Using these five principles, the team devised a preliminary framework that could help identify areas with the greatest ecological potential. By pinpointing areas with the greatest amount of endangered species, diverse ecosystems, intact wilderness, effective connectivity and resilience to climate change, and comparing them to existing protected areas, the researchers were able to identify gaps in current conservation efforts across the country and zero in on priority areas for protection.

The research is “a really important stepping stone” on the journey to reaching Canada’s conservation target, says Aerin L. Jacob, an ecologist and one of the study’s lead authors. According to Jacob, what needs to follow is a more rigorous plan that involves the extensive engagement of government, relevant stakeholders and local communities.

To spark that engagement, the researchers developed an interactive planning tool that presents the data in a user-friendly format. “There are a lot of stakeholder groups that really want to help, that really want to plan, but many of them don’t have the technical expertise and the data,” says Richard Schuster, a conservation biologist who led the development of the application. The tool will help users visualize gaps and opportunities and in turn, set their own conservation goals.

“The social science of engaging with people in a productive way and bringing together many different views is one of the most fascinating parts of conservation,” says Jacob. “How do we all sit down together and come up with something that works for people and for nature?”

Moving forward, the study authors say the conversation about protected areas must  address what exactly the government and the public want to see protected in Canada. The framework doesn’t prioritize any of the five conservation goals—instead, they want Canadians to use their data and set their own priorities.

Coristine says Canadians need to first and foremost understand why conservation is important.

“If we want our children or our grandchildren to have the same quality of life that we do, the same animals in their world, the same ecosystems, then we need to make sure we’re doing a good job for wildlife in Canada.”