Driving to the land of the pingos

The long-awaited permanent highway between Inuvik and Tuktoyaktuk, N.W.T. opens next month. How will it impact the communities?
By Ray Hyland
October 26, 2017

As I drive slowly down Beaufort Road in Tuktoyaktuk, local traffic pauses, people peer out their windows, and the kids playing on the street abandon their game, their ball gently rolling down the gravel to the grassy verge, forgotten.

I wave at the kids, and huge grins replace their curious looks. It's not surprising that my fellow travelers and I are the subject of curiosity. There are only two ways to reach Tuktoyaktuk in the summer: by boat or by plane. Other vehicles, especially ones as distinctive as our old Land Rovers, are sure to turn heads.

We've come from Inuvik, travelling overland on the new and final segment of the Mackenzie Valley Highway, which this winter will replace the ice road built annually on the Mackenzie River. The new road is scheduled to open in November, but at the invitation of the Northwest Territories government, we were among the first to preview the route, escorted by a radio operator to keep us safe from the lumbering rock trucks still constructing the thin ribbon of dirt between the two remote communities.

The trip from our starting point near the Peace Arch border crossing took about a week of easy driving. We kept well under the speed limit to admire the views and scout for wildlife. We camped at scenic spots each evening and generally enjoyed ourselves as we meandered up the winding Fraser Canyon, across the Central Plateau into the open spaces of the Peace Region, and on up the muddy and remote Robert Campbell Highway. Eventually we reached the world-famous Dempster Highway — lit up in vibrant reds and yellows that herald the end of summer — and followed it all the way to Inuvik, formerly the proverbial end of the line. 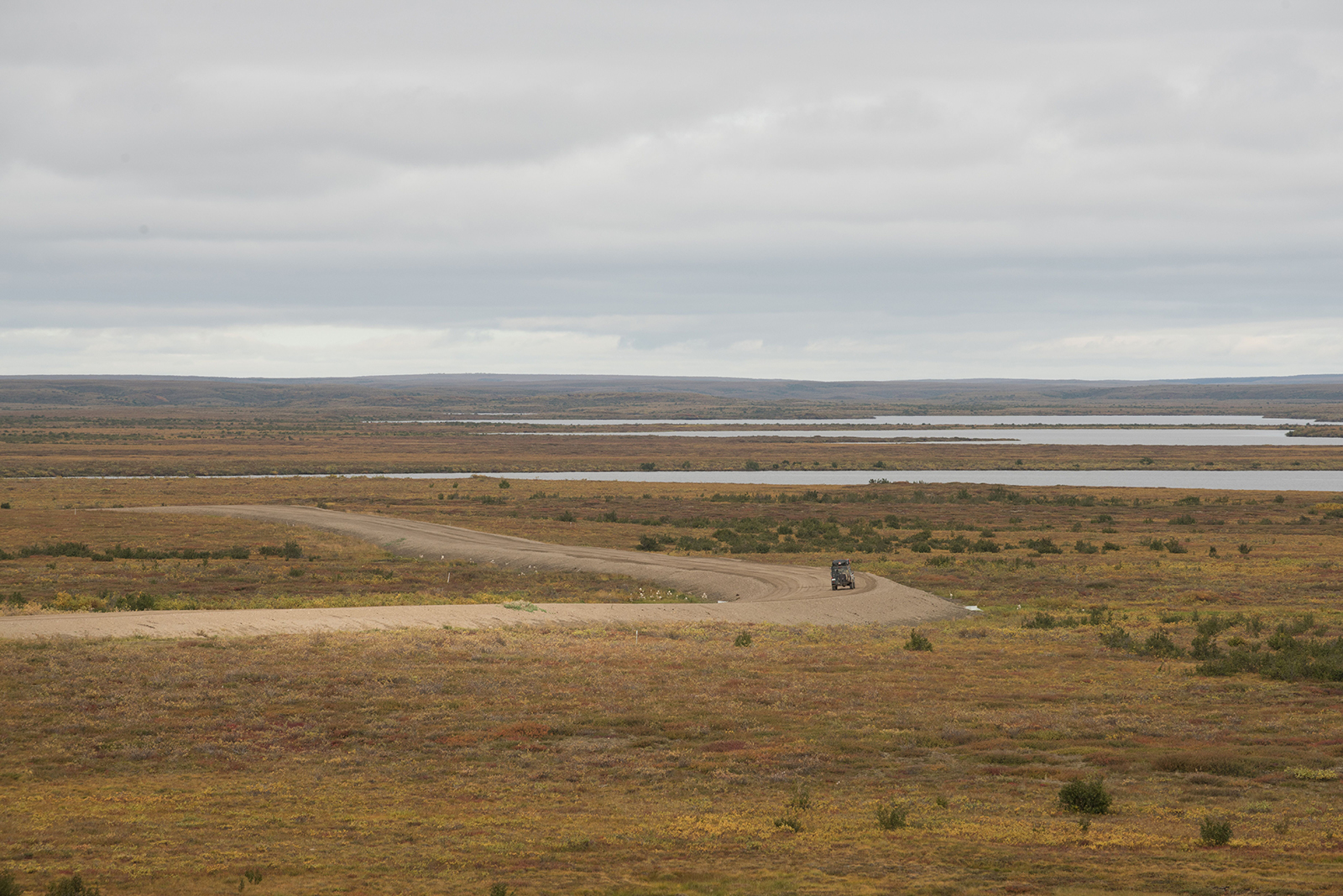 The new Mackenzie Valley Highway snakes across the tundra through a landscape dotted with lakes and pingos, ice-cored hills that form in permafrost regions. (Photo: Ray Hyland)

The new road north from Inuvik is a marvel of modern engineering. Stretching 137 kilometres and built at a cost of $300 million, it's been a long time coming. First proposed in the 1960s, the route was formally surveyed in 1974. The next 40 years were taken up with discussions about funding, environmental impacts and community implications. Construction didn't commence until 2013, but the decades of assessment have resulted in a road designed to survive the harsh conditions north of the Arctic Circle with minimal impact on the sensitive environment.

Dean Ahmet, Senior Program Manager for the territorial govenment and effectively the man who built the road, explains that its circuitous final path allows for natural drainage of the land with the minimum number of bridges and culverts — no small task in a land of lakes, ice and pingos (ice-cored hills for which the Tuktoyaktuk region is famous). The road itself is elevated and “floats” above the permafrost on a geotextile-fabric bed that prevents road materials from getting into the ground below.

Of course, the greatest impacts of the road will be felt by people in the region. As we proceeded north, we interviewed residents and local business owners to get their perspectives. Depending on who we asked, their feedback was either optimistic, full of longing for increased freedoms and choices, or apprehensive, with concerns around safety and outside influences.

Much of the population of Tuktoyaktuk is excited that they will be able to drive to Inuvik or possibly even Dawson City to stock up on groceries and supplies at a lower cost and in greater variety. As an added bonus, they'll be able to go whenever they want, unrestricted by barge or aircraft schedules. Many residents are also looking forward to easier access to medical care and government services. Local business owners are hoping for an increase in year-round tourism. 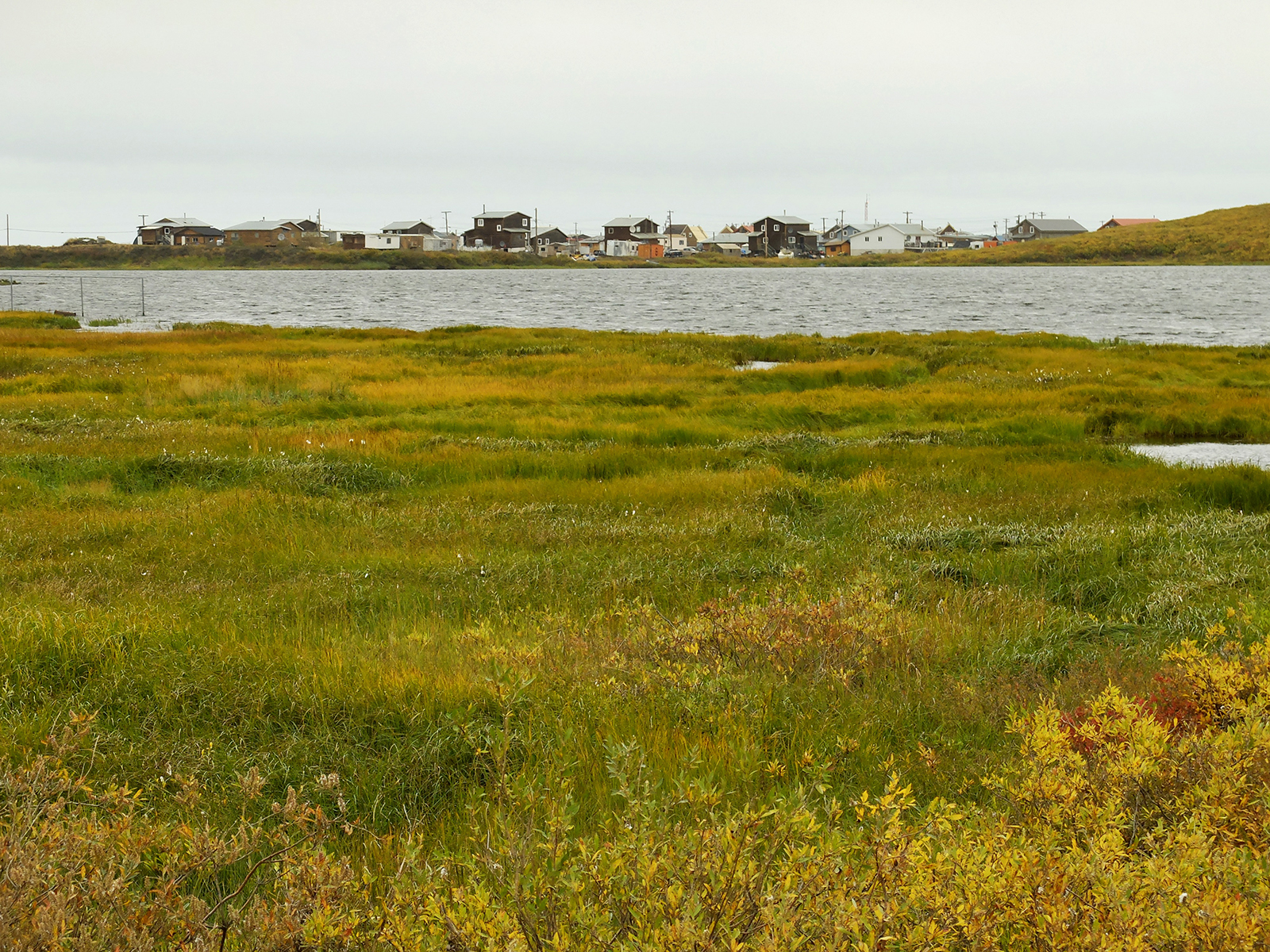 The hamlet of Tuktoyaktuk on the Mackenzie River delta. Depending on who you ask, the new road is cause for either excitement and optimism or worry in this friendly Arctic community. (Photo: Ray Hyland)

The downside to this access is having the outside world suddenly appear on your doorstep. Some Tuktoyaktuk residents bring up drug addiction issues in Inuvik and say they're fearful that a trade in illicit substances will gain a foothold in their small community. Parents and grandparents express concerns about “child snatchers” coming into the community, and feel they may need to restrict their children's free-roaming ways. The local RCMP detachment worries about the sudden availability of cheap booze. It currently costs $200 to fly a case of beer into Tuktoyaktuk, which may help explain the hamlet's low levels of alcohol abuse as compared with other northern towns.

When we asked Inuvik business owners who rely on tourism what impact no longer being the end of the highway might have on their establishments, they seemed unperturbed. They say the lack of tourism infrastructure in Tuktoyaktuk means that most tourists will still be staying and shopping in Inuvik for the foreseeable future. But speaking for myself, the opportunity to camp on the pristine beach in Tuk and watch the sun setting over the Arctic Ocean, combined with the warm welcome I receive from local residents, more than makes up for any gaps in tourist infrastructure.

After a couple of days, it's time to turn my back on the land of the pingos and head south, but I do so with a light heart. Now that there is an all-season road, accessible to everyone, I know I'll be back soon.

Ray Hyland is an explorer and creative consultant based in B.C. He is a Fellow of The Royal Canadian Geographical Society and the Canadian chapter chair of the Explorers Club.