Douglas Coupland on the dark side of plastic | Canadian Geographic

Douglas Coupland on the dark side of plastic

The renowned Canadian artist and bestselling author discusses how his love of plastic morphed into an art exhibit about ocean pollution
By Jensen Edwards
October 11, 2018

The bold colours and flawless textures of plastics have been longtime sources of artistic inspiration for Douglas Coupland, one of Canada’s best-known artists and writers. But after confronting his own relationship with plastic on the northern coast of Haida Gwaii, B.C., Coupland saw the material melt from an inspired art form into a tangible concern.

Now, he’s swirled together cigarette butts, water bottles, flip-flops, a picnic cooler, jerry cans and other pieces of trash from the Pacific Ocean in a 50,000-litre tank at the Vancouver Aquarium to create Vortex, an exhibit that confronts visitors with tanks of used garbage placed among scenes and sounds of Haida Gwaii, where much of the material was found.

Here, Coupland speaks about the exhibit, his own relationship with plastics and creating art to inspire change.

On his artistic relationship with plastic

In 1983, I went to art school in Japan and I really bonded with the Japanese industrial colour palette of plastics. It’s a very orthodox set of red, blue, yellow, pink, turquoise, black and white, and I thought it was very cheerful. Then I was in a Tokyo department store in 1999 or 2000 and had this magic moment when all these cleaning products in the aisle started speaking to me. I bought about 150 bottles — bleach, fabric softener, et cetera — and then, back in my hotel room, emptied it all down the toilet. It sort of freaks people out, but then I say, “Let me get this straight. You add dead skin flakes to it, then that would have been okay?” And suddenly everyone realizes that they’re just as complicit. I came back home and racked the bottles up sort of deadpan, as a collection; I just liked the way they looked.

In 2013, two years after the 2011 Japanese tsunami, I was up on Rose Spit on the northernmost coast of Haida Gwaii. I was just standing there and one of the bottles, the type I bought in Tokyo, washed up at my feet, right in front of me. It was a shocking thing. It felt really supernatural, cosmic, divine; it made me think, “What’s going on here with this stuff?” 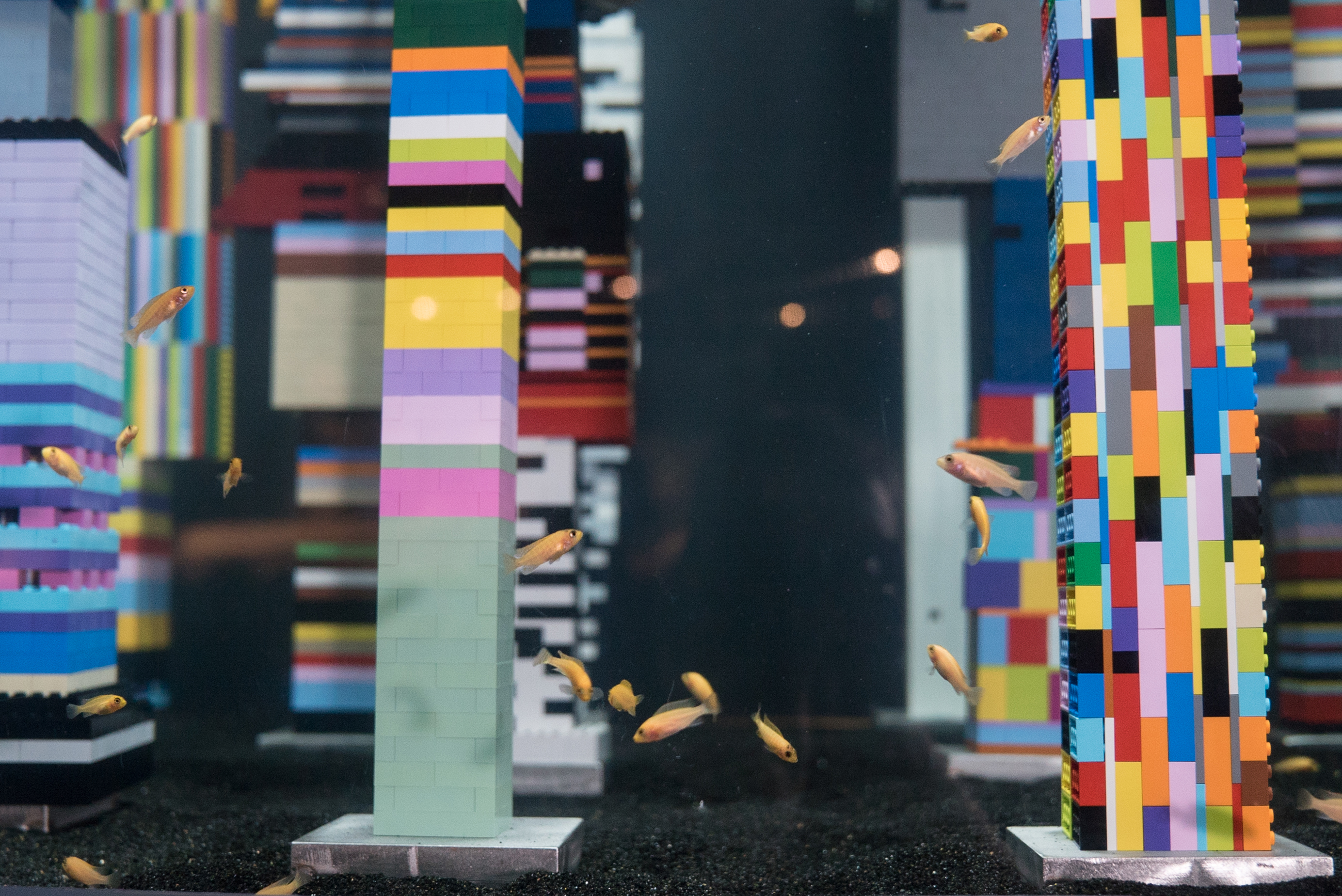 Cichlids swim among towers made of LEGO in Coupland’s Vortex exhibit at the Vancouver Aquarium. (Photo: Ocean Wise)

On the concept for Vortex

I think the thing with art and ocean plastics right now is that it’s like, “Oh, it’s a whale made out of Gatorade bottles,” or “Oh, it’s a dolphin made out of flip-flops,” or “It’s a mammal made out of blank.” That’s kind of like bulk art, and I didn’t want to go in that direction — I wanted something that had a memorable impact.

In real life, all the damage is being done underwater with microparticles of plastic. But then you have places like Malaysia or Thailand or the Dominican Republic where it’s just endless and thick. I wanted to create an image to show what that might look like. And then there had to be some sort of vessel inside it with mythical figures because otherwise it’s just a tank filled with plastic. I was in Berlin, and I just cold-called the aquarium and explained it. After I explained it there was silence on the line, so I said, “Well, thanks, I understand,” and they said, “No, no it’s great — let’s do it!”

I was talking with John Nightingale, the CEO of Vancouver Aquarium, before I began this in earnest. We were on the way up to Haida Gwaii with our team and I said, “What if it freaks out kids?” and he said, “Great, let them be freaked out. It’ll make it an emotional issue for them.”

On collecting the debris for Vortex

Initially I thought, “Oh, I’ll just get some plastics,” but oh my God, it was so much work! It was so political and we had to work with all of these environmental groups, the Japan Earthquake Authority and people up in Haida Gwaii who picked up the big stuff when it started coming over. The largest pieces came over first. Counterintuitively, they were also the lightest. These chunks of Styrofoam the size of your living room were just washing up everywhere. We also found two boats, and I had to go to Japan to get permission from the guy who owned one of them. He was like, “Oh my God, that thing’s bad luck, keep it away from me.” So I got to use it with his blessing. 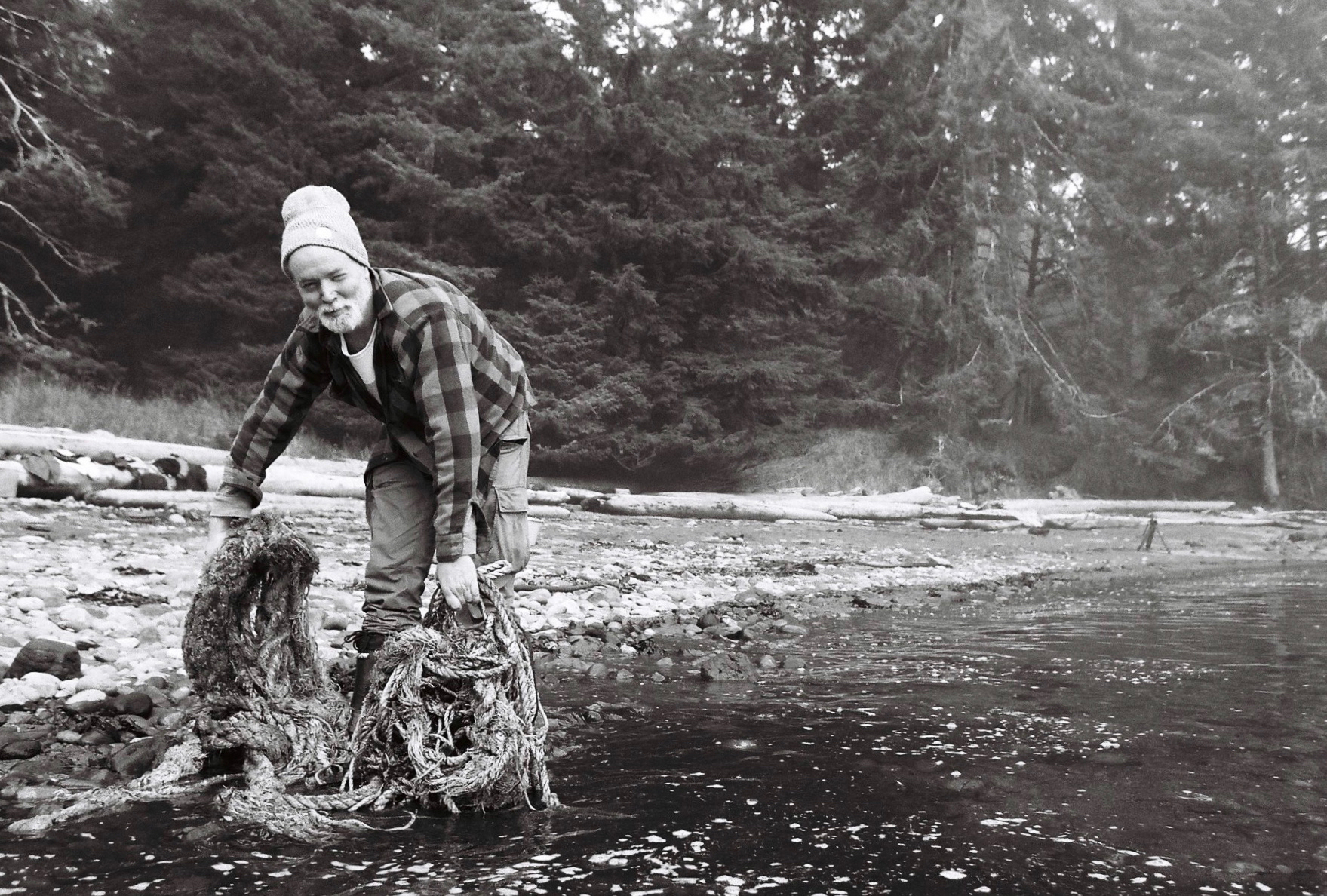 On the centrepiece of the exhibit

There’s a lot to look at, but definitely the piece in the middle is the one you’re probably going to have a scary dream about the next night.

The boat itself came from the village of Ishinomaki in Japan and was found up north on Haida Gwaii. Most of the big plastic comes from the shore on Haida Gwaii. I would say there’s a 25 per cent chance that it’s actually tsunami debris. You can’t just go through each piece and say what is and isn’t.

In the boat there’s the past, the present and the future of plastic, which was only invented in 1907. The 20th-century view of plastics was like, “Yay, happy environment, better tomorrow!” and representing that century is Andy Warhol, documenting the plastics and glamourizing them. In the 21st century, you’ve got a female character who is an African refugee en route to Europe, showing the dark side of oil: environmental degradation, climate change and everything that goes with it. Representing the future are plastic boy and plastic girl. They’re these great big bobblehead dolls photographing what they see around them.

Andy Warhol and the refugee model are made out of latex by this special effects company from Etobicoke. The fun of them is seeing how good the detail is, seeing the little hairs on the wrists and that kind of stuff. But with the bobbleheads it’s the opposite. They’re perfectly fake. You’re asking yourself, “Are there any blemishes or any cracks and that sort of stuff?” They have to be absolutely perfect. So you have these impossible standards for either end of the reality spectrum.

I said, ‘What if it freaks out kids?’ and he said, ‘Great, let them be freaked out. It’ll make it an emotional issue for them.’

On how visitors experience Vortex

I think the thing that will go to your head first is, “Oh wow, this thing actually exists.” I like work that, when you see it, makes you ask, “How did that thing enter the universe? Is that thing really happening in front of me?”

I want people to have that sort of “holy shit” moment. It’s this sort of impossible thing and yet it exists. I think that’s number one for me. And then number two is, “What the hell is it? Why is it made? What’s going on here?”

That’s what I’d like to have happen, but there’s also information on the side wall. There’s this thing called Ocean Cleanup, and it’s the 10 most persistent things they find on beaches — cigarette butts, straws, Bic lighters, bottle caps, feminine hygiene products. We have these buckets of the stuff, and everyone who looked at them was like, “Yuck.” So we put them on sledges behind plastic and suddenly they became quite beautiful and, unexpectedly, people really gravitate towards that.

On how Vortex from his previous work

This one involved so many people. I don’t know what the hell I was thinking, like, “Gee, we’ll put this in an art museum.” It could never have been done. It took the full resources of the Aquarium and all of its relationships up and down the coast with the federal government. Even then, it was right down to the wire getting it installed.

That was the difference; I’ve never done anything that involved so many people. To be fair, no one was antagonistic, everyone was like, “Yeah, let’s do it.” It was so communal; that was a surprise. 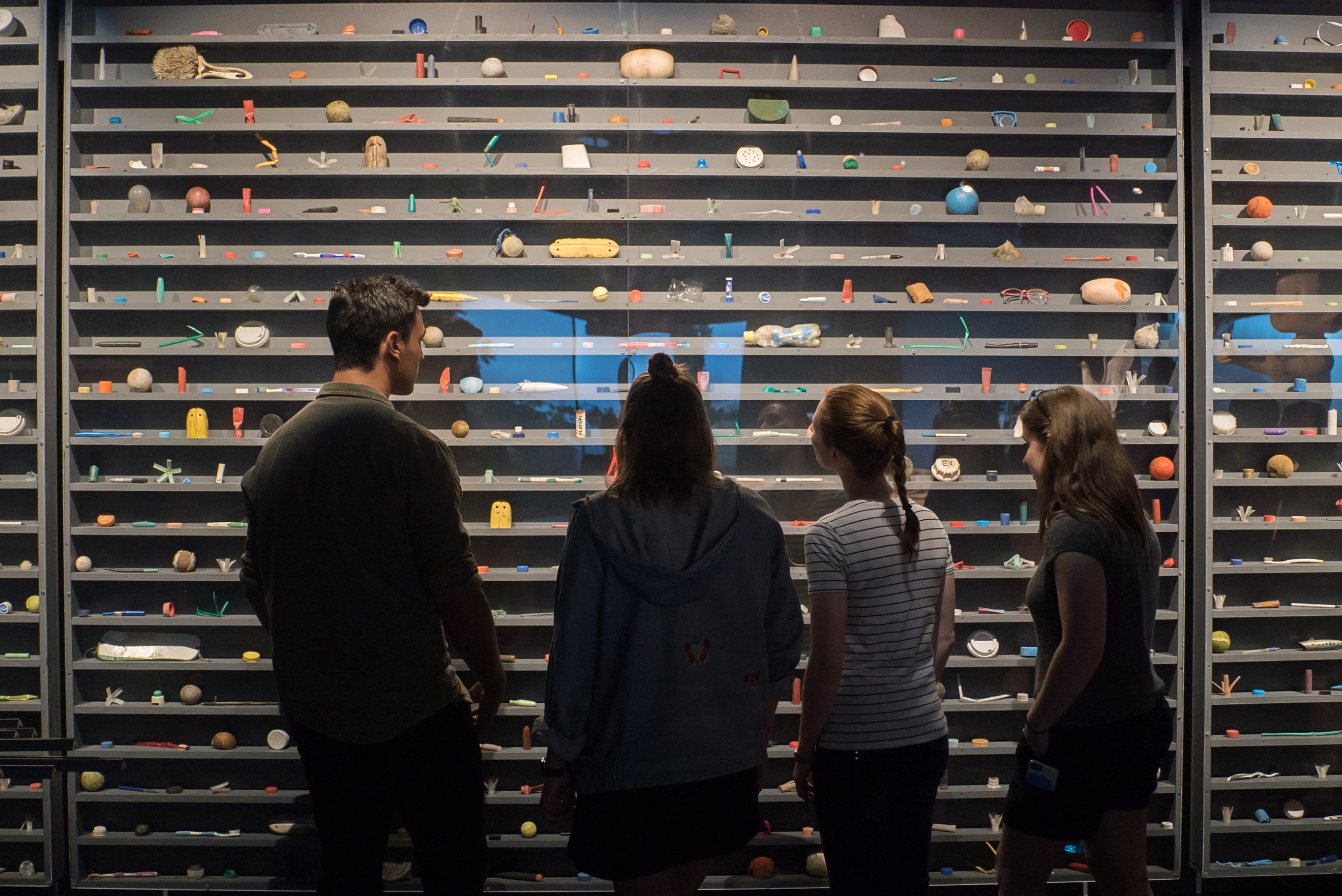 On the collision of art and science in Vortex

I think it takes it out of the realm of going on a very worthy field trip or something and then it relocates it in some more compelling place inside your heart or soul, or brain or whatever you want to call it. No matter how much you describe it, when you walk in, it’s still not going to be like what you thought it was. It has the power to shock and surprise and I like that.

On how Vortex has affected him personally

For me, the most psychologically weird moment was near the end, when we had to fix a few things that were my call, so I put on hip waders. I was walking through the trash and the water in the big tank hadn’t warmed up yet. It was super cold and there was a mist on it, too. So I was walking through the mist staring down at the water and the trash was filling up my entire field of vision, and I got this sort of weird chill — kind of like seeing a car crash and then having it play back in slow motion. My brain went into that mode and I’m still going back to it.

Vortex will be on display at the Vancouver Aquarium until April 30, 2019.