Connecting to 6,000 years of history at Wanuskewin Heritage Park

The cultural site near Saskatoon is working to connect non-Indigenous and Indigenous people to 6,000 years of the region’s First Nations heritage
By Aaron Kylie
December 20, 2017

“Both First Nations and non-First Nations people come to this park, and a lot of them say, ‘When I come out here I feel different,'” says Ernie Walker.

He’s standing amid prairie grass near the edge of the Opamihaw Buffalo Jump, used some 2,300 years ago by Indigenous Peoples of the northern plains at the confluence of the South Saskatchewan River and Opimihaw Creek, a big cloud-filled, blue prairie sky overhead. “I’m a hard scientist,” he continues. “I believe in the As and Bs and Cs of things. But I do recognize that there are other stories here. Lots of other stories.”

Looking more farmhand than world-renowned archeologist in his green University of Saskatchewan ball cap, plaid shirt, dusty blue jeans and cowboy boots, Walker is touring a group of visitors around Wanuskewin Heritage Park, an Indigenous cultural site a 15-minute drive from downtown Saskatoon that has a history dating back more than six millennia. It’s not unusual in the summer to find Walker stooping over a one-square metre excavation unit here. There are likely few, if any, more qualified to share stories from this 240-hectare national historic site.

A professor in the department of archeology and anthropology at the University of Saskatchewan, Walker was, in 1982, the first to identify 19 pre-European-contact archeological sites in the terraces and point bars in the creek valley bottom and coulee depressions that now form the bulk of the park, which opened in 1992. Despite being one of its founding board members, Walker hasn’t lost his taste for fieldwork, spending the past 35 years meticulously digging artifacts out of Wanuskewin’s dirt.

There are countless treasures from this site on the west bank of the South Saskatchewan River that promise a transformative experience during any visit — tours and cultural programs, six kilometres of trails, teepee encampments and an interpretive centre with galleries showcasing the work of local and international Indigenous artists. But visitors who have the great fortune of running into Walker while exploring Wanuskewin are sure to gain an even greater appreciation for the sacred place that in Cree means “being at peace with oneself.”

After all, Walker’s knowledge of Wanuskewin’s past is so great that local First Nations people named him Miyo Teyasew (Red Thunderbird) and made him an honorary chief. 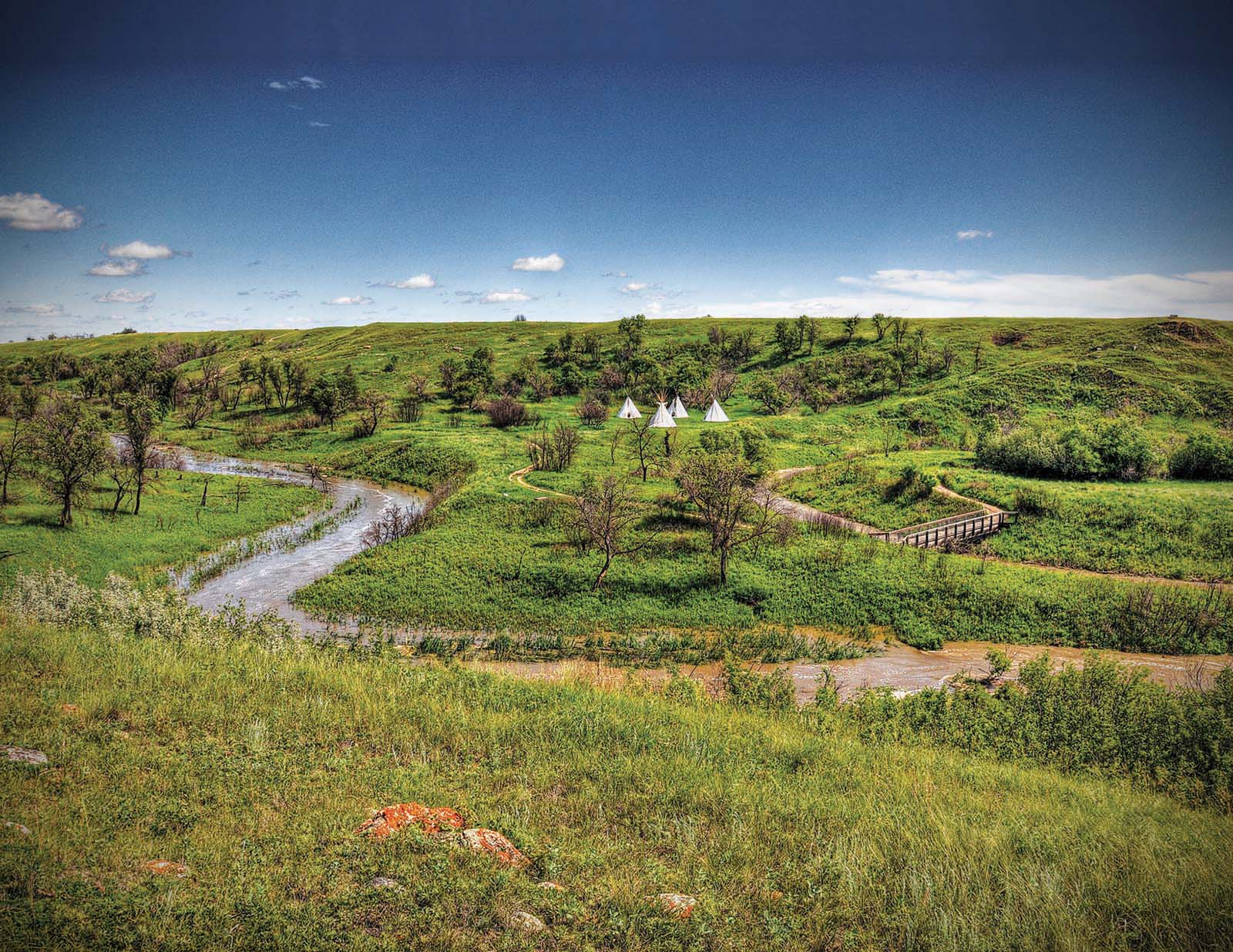 “If you were standing here 12,000 years ago and looked off to the northeast, you would see a mile-high block of ice. That would be the waning Wisconsin Glacier,” says Walker, setting the scene for how this dried-up creek valley became a hot spot for Indigenous Peoples for thousands of years before Europeans arrived on the continent.

As the glacier melted, Lake Saskatchewan formed in the vicinity of present-day Saskatoon. As ice dams in the area melted in subsequent centuries, meltwater and lake water cut through the landscape in a series of water channels that created a braided river system. About 7,000 years ago, explains Walker, the present-day Saskatchewan River dug deeper into its trench, and other small channels dried up, further shaping the distinct geography of the park’s centerpiece Opimihaw Valley, because where an important tributary of the mighty South Saskatchewan once ran there is now just a minor creek.

Opimihaw Creek, which means “flying man” in Cree, has meandered over the years, eroding its way across the valley and carving out new banks. It’s those steep banks, with their 40- to 50-metre drops from the lip of the surrounding prairie, that provided good shelter, particularly in winter, and created ideal buffalo jump sites, precipices that drew almost every pre- European-contact Indigenous group known to inhabit the Great Plains here — Blackfoot, Cree, Ojibwa, Assiniboine, Nakota and Dakota. Year after year they followed the bison.

“Bison are a critical part of the story,” says Walker, noting that by 2018, the park expects to reintroduce a herd of genetically pure plains bison as part of its larger expansion plans, which include a campaign to be named a UNESCO World Heritage Site.

“Bringing plains bison back to the park is a symbol of resilience and adaptation,” says Walker. “It’s a good analogy for what First Nations cultures have gone through — signing treaties, being moved off to reservations, disease, residential schools and all of that.”

The return of bison to Wanuskewin is also symbolic in another way. The very animals that brought Indigenous Peoples to this land in the first place are essentially responsible for the amazingly intact and complete record of cultural development in the region.

“It’s a phenomenal archeological resource,” says Walker of the ongoing discoveries being made at Wanuskewin. “We realized in the very early days that this is about First Nations culture and history, and we wanted First Nations people to be a fundamental part of this. And that’s how it got built.” 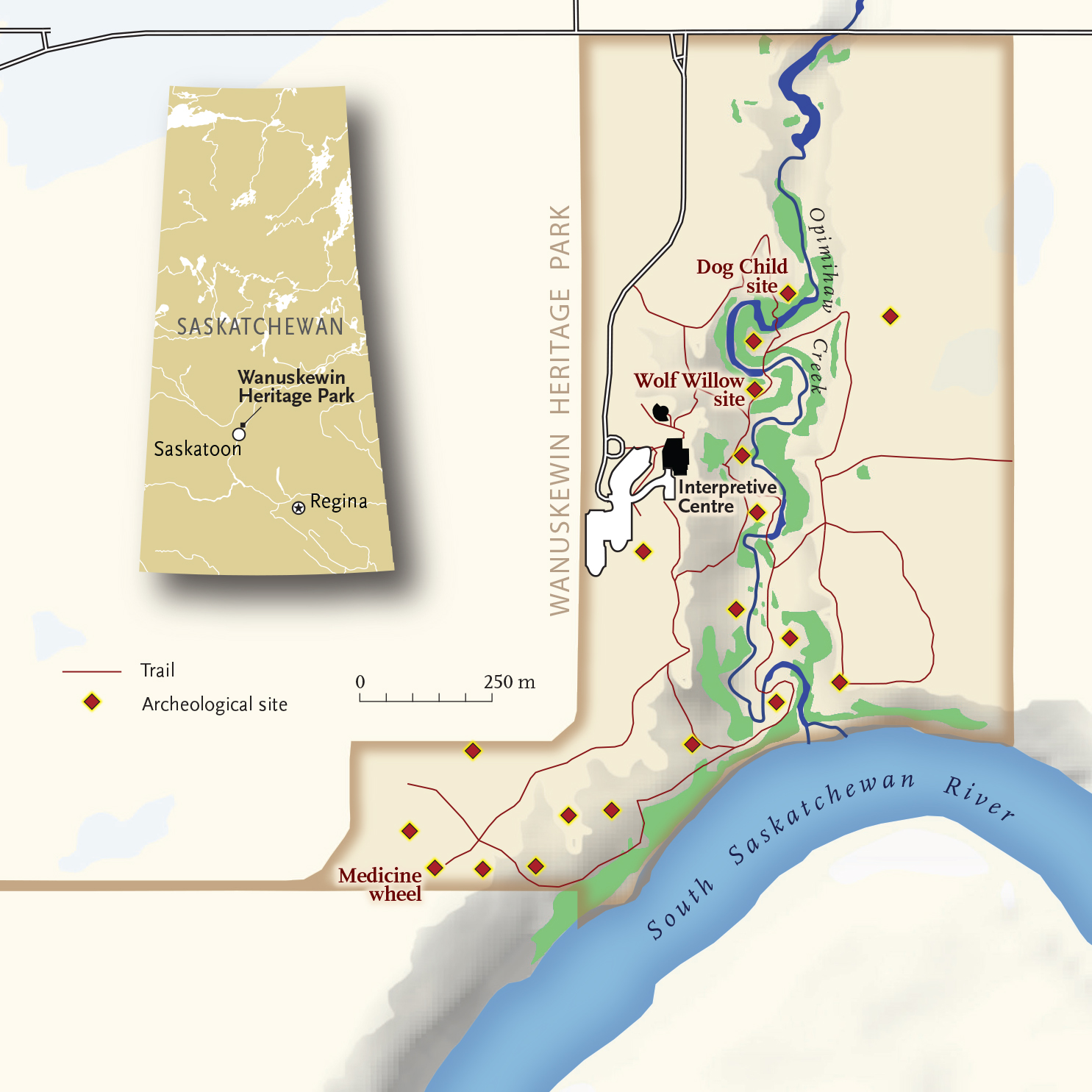 “Wanuskewin brings people together,” says park elder Jake Sanderson, 70. “It’s not only First Nations people but people from around the world. It’s nice to see other nations come and shake hands and tell us their stories.”

No artifact illustrates the longstanding historical and cultural importance of Wanuskewin as a meeting place better than the medicine wheel. One of the site’s most interesting archeological finds, the wheel is on a ridge in the southwest corner of the park that overlooks the South Saskatchewan River and offers a 360-degree view of the surrounding plains.

The wheel consists of a seven-metre-diameter central stone cairn and a 13 metre-wide outer ring of rocks. There are also at least five smaller stone cairns, spaced between one and 17 metres away in all directions and many boulders scattered within the larger structure itself.

One of fewer than 100 known medicine wheels on the northern plains — and the northernmost of them all — it’s believed to have been created about 1,500 years ago. Unlike many medicine wheels, there are no spokes connecting the central cairn and the outer ring.

“I describe it as a gift from a creator,” says Sanderson, who was born and raised on the James Smith Cree Nation near Prince Albert and still lives in the area. “The spirit gave us this medicine wheel, to all the people, to all the animals and everything in this world and in this universe.”

Cultural experts believe medicine wheels served a range of religious and ceremonial activities, which may have included sun dances, medicine lodge ceremonies, vision quests, burials, alignment with astronomical phenomena (although there appear to be none associated with the Wanuskewin wheel) and calendrical purposes. The presence of the medicine wheel at Wanuskewin is extremely important.

“The keepers of the stories of ancient times were connected to spiritual places here on Mother Earth,” says Sanderson. “Andone of them, the main one, was the medicine wheel. The spokes were points to different sacred places on Turtle Island and the world.”

Local Indigenous Peoples use the wheel today as a site for offerings, ceremonies and songs. And the larger park continues to be a meeting place for these and other First Nations from across North America. At the end of June each year, it hosts a major celebration that kicks off the northern plains powwow season. About 50 sweat ceremonies are held here annually, as are numerous blessings, smudge ceremonies and other Native cultural art events. Saskatchewan’s Federation of Sovereign Indigenous Nations holds meetings and ceremonies at Wanuskewin, which has also hosted Indigenous groups from Nunavut, Haida Gwaii and Arizona interested in implementing similar preservation initiatives. 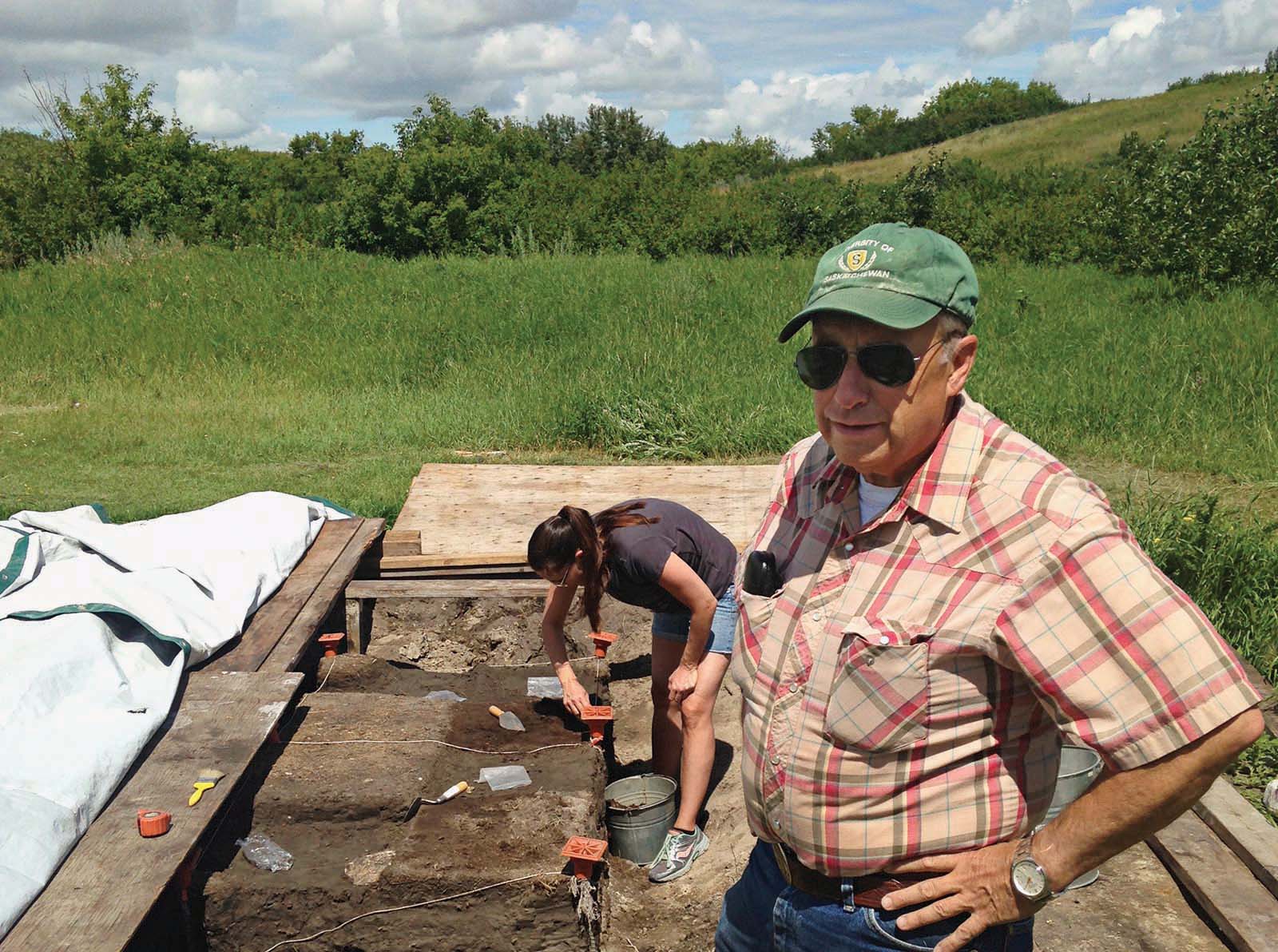 Archeologist Ernie Walker, one of the park’s co-founders, has overseen much of the excavation work at Wanuskewin. To date, nine of 19 pre-European-contact sites have been explored. (Photo: Aaron Kylie/Canadian Geographic)

More than anything, Wanuskewin seems to be about connecting people — both Indigenous and non-Indigenous from any background — to the cultures and history of the northern plains of North America. And the place does make you feel different, even if you can’t explain why.

That’s certainly how I feel, my hands dusty from digging in a one-metre-square excavation unit, as I discover a bison toe in the small section of dirt I’m clearing. Walker has allowed me the privilege of working at Wolf Willow, the ninth and latest of the park’s 19 pre-contact archeological sites to be examined. Trowel and bucket in hand, I help excavate the last part of the 110-square-metre site at “cultural level one,” which is estimated to be about 500 years old. Soon, I also find an end scraper (a small stone tool used to clean hides), then a piece of Swan River chert (a type of hard rock found in Saskatchewan believed to have been used to make other stone tools). I’m the first person to hold these artifacts in half a millennium — and in the case of the bison toe, maybe the first person ever.

The discoveries come with a bonus lesson from Walker. Wolf Willow is believed to have been a campsite, occupied by northern plains peoples who were likely chasing bison and/or holing up for the winter, during at least four distinct periods: 500, 1,000, 3,300 and 4,600 years ago. Many of the artifacts found at this spot are similar to those I’ve located — broken animal bones and stone tools, though archeologists also analyze the soil for bits of charcoal and pollen to help them piece together habitat conditions from each era. Could there be a better way to make history and culture hit home?

Walker, of course, can do better still. As I scrape my trowel gently across the patch of uneven ground, he explains that he has actually put me to work “cleaning up” an excavation plot he’d allowed a young, local Indigenous visitor to have his hand at. After all, Walker notes, directly or indirectly the artifacts lying here belong to the boy’s ancestors, and how could he let the youngster stop by without an opportunity to literally connect with his past? So, although Walker coaches careful, patient scraping of the dirt from each plot to keep the ground as level as possible, the boy got excited as he started to discover artifacts and aggressively dug them out. Renowned archeologist Walker submitted to the imperfect excavation exuberance.

“It’s about our community,” says Walker. “It’s about First Nations and non-First Nations, and if you know anything about Truth and Reconciliation and where we’re going in this country, I see Wanuskewin as a beacon, showing the rest of Canada that we’re one. This is the Canadian way.”

The oldest of artifacts

Many of the oldest radiocarbon-dated artifacts found in Wanuskewin Heritage Park come from “Dog Child,” a flat terrace on the west bank of the Opimihaw Creek at the park’s north end and the eighth archeological site to be excavated. Between 2004 and 2009, archeologists at the 71-squaremetre site uncovered six “cultural levels,” or distinct extraction layers corresponding with habitation periods. The deepest, and therefore oldest level, known as 3b, contained 24 projectile points — stone objects most likely used on the heads of spears, arrows or darts — as well as numerous bone and stone tools, and bones from what are believed to be 10 individual bison, including one of the oldest radiocarbon-dated artifacts from Wanuskewin, the left distal metacarpal of a bison estimated to be about 5,900 years old. Archeological finds from this time period are rare. Walker has identified 115 sites on the Great Plains, though only a handful are well documented.