Exploring the passion of creator Jean Daum with a look behind the scenes
By Rob Csernyik
October 19, 2020

Have you heard this one? A teacher asks “Why can't freshwater fish live in saltwater?”

The student responds “The salt would give them high blood pressure.”

It’s the sort of retro, family-friendly humour an estimated 1.25 million Canadians read every week in Coffee News, the double-sided, tan community paper found in cafes and restaurants, chock full of positive news and trivia, horoscopes and quotable quotes with 32 ads running along the sides.

Readers might ask the other person dining with them what their horoscope is. Or the table will take the trivia quiz together. It’s analog entertainment in a digital world, largely unchanged since its debut in Winnipeg more than 30 years ago. Despite the waning fortunes of print products, it continues to make money for franchisees across Canada and around the world, self-styled as “The World’s Largest Restaurant and Coffee Shop publication!”

Coffee News is the innovation of Jean Daum, a community newspaper publisher who moved to Canada from Scotland as a young girl. In 1988 she emerged from six months of testing in her apartment with a prototype for a new community publication and published its first issue that October.

Omnipresent in Canada's small towns, Coffee News has become its own bit of Canadiana, yet one which fades into the background unquestioned with its story little known. It’s also the passion of a sui generis figure in Canadian entrepreneurship, who never got her due for turning a little neighbourhood publication into a company worth millions with readers around the world, and a vision so well-executed the print product has the same look, feel and content today. 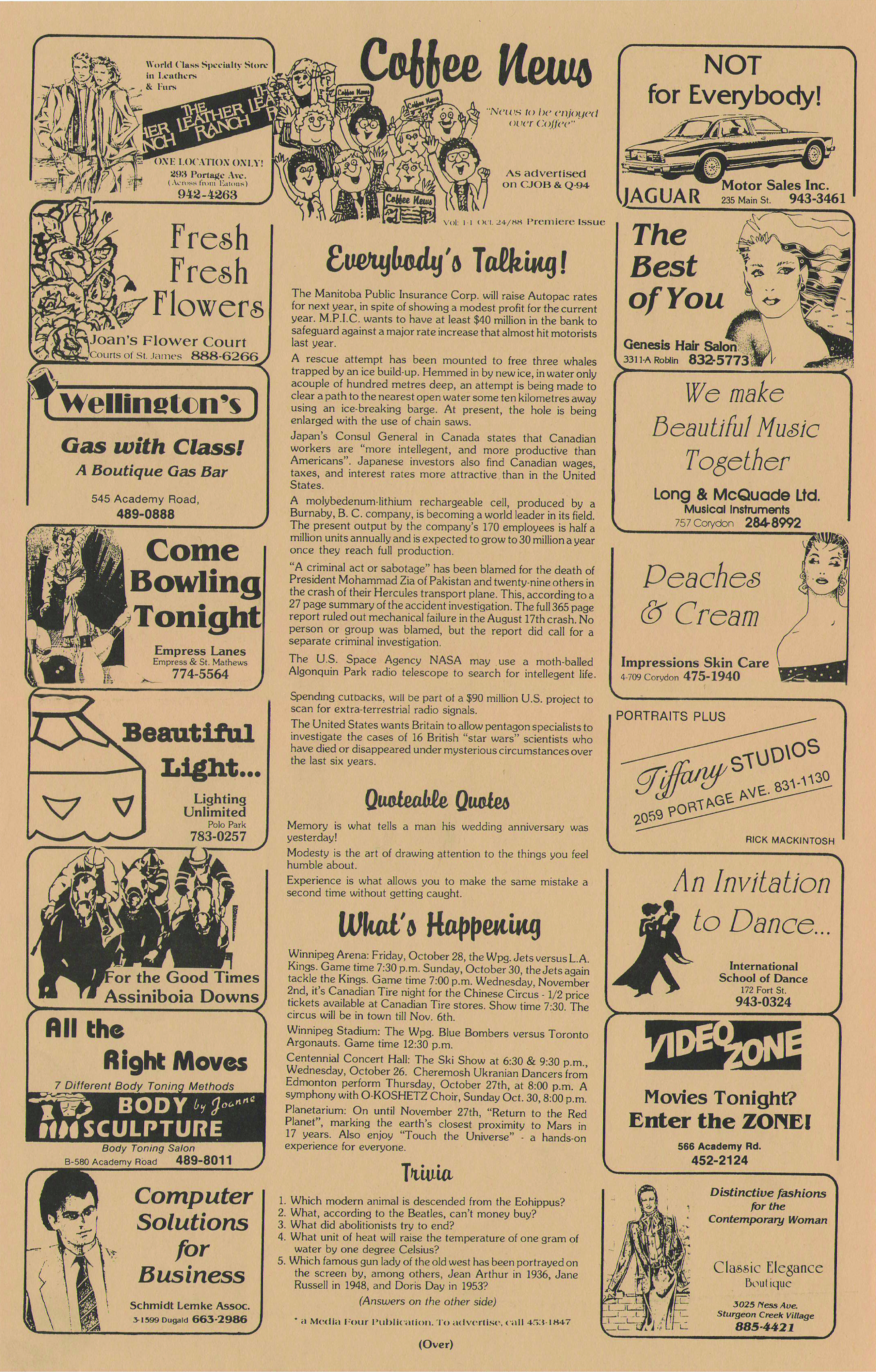 My research into Coffee News quickly netted that Jean had passed away in 2007. But two of her children, Candice and Leslie Daum, still work for the company, as vice president, Canada and in franchise relations respectively.

There’s a fierce loyalty people have to this publication — some franchisees and employees have been with the company for more than 20 years. In our Zoom meeting, Candice holds a bespoke cigar box ukulele with the Coffee News logo up to the webcam. It was custom-made as a 20th anniversary gift from one of their franchisees. She also racks her brain trying to remember if she has a photo of the Coffee News logo tattoo another got as a permanent display of devotion.
Jean Daum was a former ballroom dancer who once wrote a book on the topic, and the operator of two community newspapers that fizzled out. Coffee News, the sisters say, was inspired by a day Jean found herself starved for reading material when dining out alone.

“She'd go through the menu and then she actually literally got to the sugar packets, started reading those and then she thought ... maybe there should be something here to read,” Candice says.

Unlike daily newspapers, Jean wanted to read something light-hearted and uplifting. She considered placemats at one point, but didn’t want her product to appear disposable, eventually settling on the two-sided paper still used today.

“We have the original copy of that first paper and it looks like Coffee News,” Candice says noting the sizing, colour, fonts and ads are all similar.

But the sisters say the paper’s simplicity belies the research that went into it. Tan was chosen as the colour because Jean said her research found it inspired trust, though it was also the colour she took her coffee — further inspiration for the name.

The content, always evergreen and a little retro now, was curated in-house by Jean, reading widely to find interesting stories.

“Her boyfriend at the time, was starting to write jokes, but she had to keep on telling him that's not suitable for Coffee News,” Candice says.

“Then I came in,” says Leslie, who was the joke writer and quotable quote selector for several years. She adds Coffee News has employed the same writer for more than 20 years which is why the stories all have the same familiar tone, one similar to Jean’s own personal style.

One key innovation was that the advertising was super-local, so instead of one edition in a large city, there’d be several. As Jean started, running the entire operation from home, she was publishing ten local editions of the paper herself and sometimes not sleeping from Wednesday to Friday in order to get them ready for print. The only bathroom in her apartment became the dark room — these were more primitive times — and Candice remembers occasionally hearing swearing when Jean realized an error and would have to restart her work.

Coffee News was never intended to be a big business, but after a few years there was interest from an outside market — Thompson, Man., several hours north. In short order the paper went from being something local to Winnipeg to a fixture in cafes and restaurants in communities small and large across the country, and later still, the world.

Bill Buckley, president of Coffee News International is described by the Daum sisters as the yin to Jean’s yang. He was always more comfortable addressing crowds about the business, while she preferred working behind the scenes.

Based in Bangor, Maine, he spent years working as a bank executive and in the Air National Guard before joining Coffee News in 1995. Buckley recalls, aghast, how Jean once sent her operations manual to someone who simply wanted to see it — that's how kind she was. He takes a comparably harder edge, but remembers her passion and her smarts more than anything.

“When you asked her about Coffee News, or why the ads were designed the way it was, or why did she lay out the Coffee News the way she did? Or why did she choose restaurants as distribution? And on and on and on, you can ask the most in depth questions you’d want to ask her. And she didn't hesitate a second — the answer came right off her tongue immediately,” he says. “And it would be the kind of answer you would expect from somebody like Christ. You know, you'd say holy mackerel, that is so right.”

Her parable-like way of discussing her business was something he’s never encountered since.

It was this passion and belief in the project that has helped attract a wide franchise network that now includes eight countries outside North America, and multiple languages, which has allowed people to make a career out of running Coffee News in their area. Following Jean's death in 2007, the company was transferred to Buckley, with the official announcement made at the paper's twentieth anniversary celebration in Winnipeg.

Buckley says after the 2008 financial crash business declined to a far cry from the early growth he recalls, but from January to March 2020 they sold more franchises than they did in most years since then. This leads him, like the Daum sisters, to be bullish on the future of Coffee News.

“What we call it now is the original social media,” says Candice. “Because it got people talking, we would ask each other the trivia — like we had groups of older gentlemen that would have some kind of Sunday lunch or something and literally be waiting for the Coffee News to come. And then they would quiz each other on it.”

“It forces people to talk, to actually communicate again instead of just looking at their phones all the time,” Leslie says. 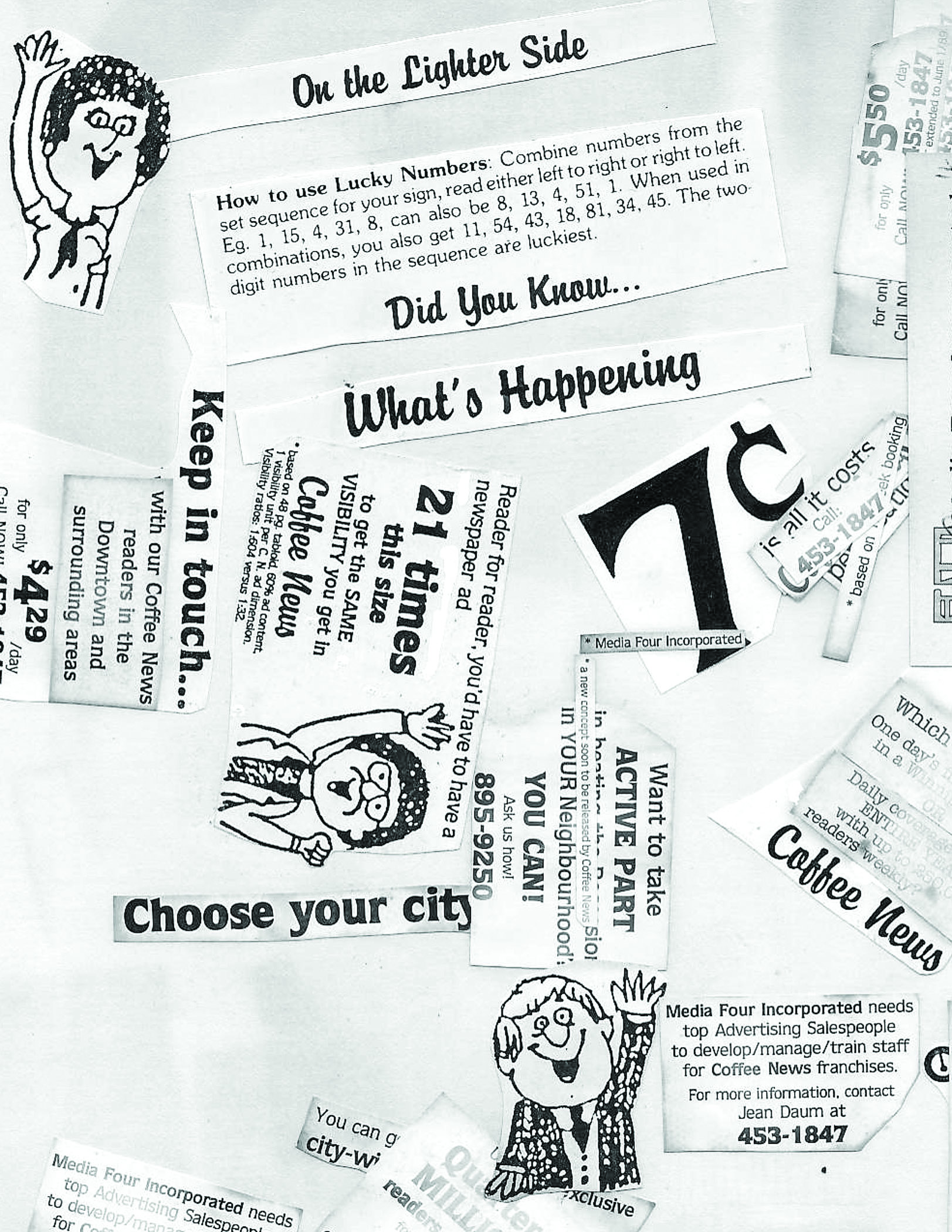 When I mused about writing a story on Coffee News on Twitter it garnered, for an evening, a lot of attention. What I noticed parsing through the responses was you had people from all over the country, from all different backgrounds who were genuinely curious to know more.

P. Whitney Lackenbauer, a professor at Trent University's School for the Study of Canada is familiar with Coffee News, partially because his 15-year-old son is an “avid reader.” While the content isn't tied to Canadian identity, Lackenbauer says its inspiration is unmistakably Canadian — not only as a “wonderful Canadian success story of entrepreneurship,” but because of our domestic obsession with coffee shops as a forum for ideas and community.

“But there is something that I can't put my finger on,” he says. “It is uniquely Canadian about the feel of our coffee shops and the interactions and ... the small city or town feel.”

I asked the Daum sisters what Jean would think about her creation being considered a piece of Canadiana.

“That was actually part of the beauty of it. It is made to feel like a neighborhood community paper that's done by someone local,” Candice says. “So, one of the beauties of Coffee News is we make it look small, and we make it look, you know, unobtrusive, I guess. But then, I've done a few trade shows before and I've had people from, like New Zealand or Africa like, 'Oh, you have Coffee News here too?’”

And, breaking into peals of laughter alongside Leslie she says imitating a knowing voice, “Um, actually, it started here."